Fullerton Comes Alive On the Day of Music

These were just some of the many highlights of Day of Music for the 5th Annual event this past June 21st, aka summer solstice/first day of summer/the longest day of the year/when Fullerton comes alive with the sound of music.

Touted as a festival of countless free concerts, locations such as coffee shops, comic book stores, boutiques, churches, restaurant bars, parks, and the like were teeming with stylings of pop, rock, classical, Latin, country, jazz, and everything in between.

Black Hole Records started the day off early in the parking lot of their new location at the Carpe Diem complex. Punk rockers like Coast Red, High Ground, and Just Because stomped the stage furiously while mosh pit fiends thrust their fists into the air in typical defiant gesture.

Conversely, just a few blocks away at Villa Del Sol was Bob Lexin performing on ukulele amidst a bubbling fountain and gurgling toddlers beginning their early childhood development foray into music appreciation. Rhythmo Mariachi Kids regaled the crowd with lively Latin standards and S-Tet, Monique Barrios, and members of OLLI rounded out the cultural line-up to an appreciative courtyard audience. 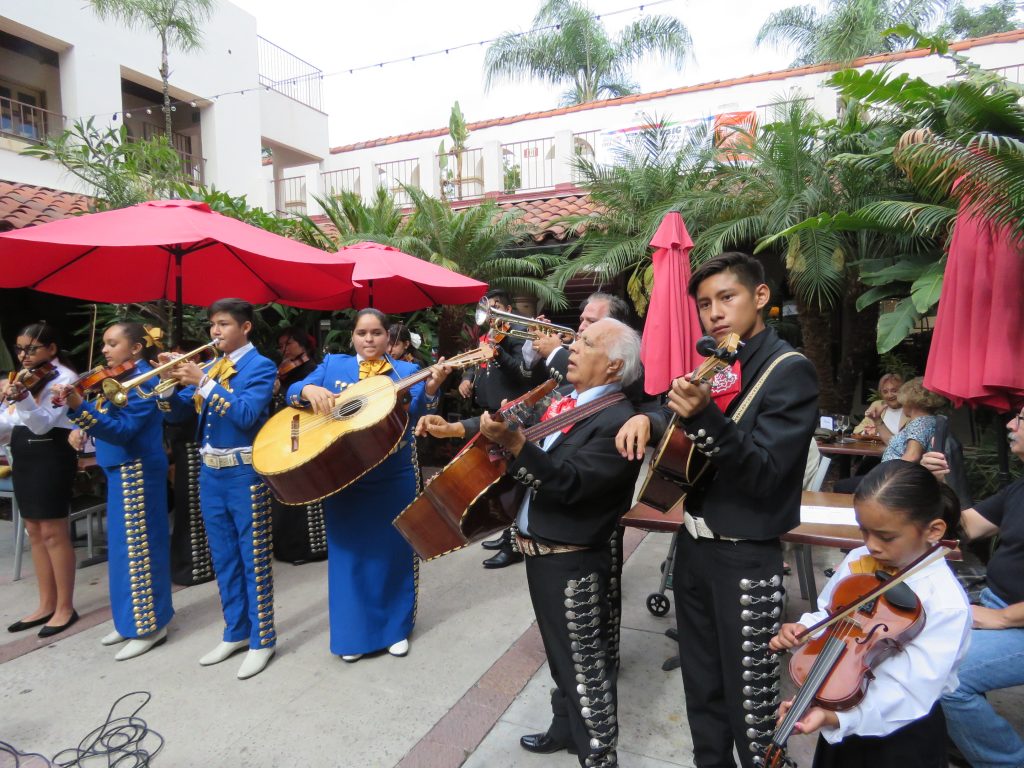 Over at Mo’s Music was a flurry of activity with proprietor Roger Palmateer and Day of Music founder Glenn Georgieff cramming the grounds of the emporium with an outdoor stage; an indoor Tiny Desk style stage where musicians performed cover songs unplugged; a meet and greet/book signing by electric guitar muse Phyllis Fender; a pop-up radio station taking song requests and featuring interviews with local personalities; Titan Radio’s simulcast; plus whatever else they could throw into the proverbial mix.

If you headed a bit north, a more balmy and relaxed scene was occurring at the newly dubbed LawnFest at Hillcrest Park venue. Amidst all the greenery, electric pink mannequins simulating a summer shindig were the only element to interrupt the calm. Lawn chair toting attendees arrived eager for complimentary Hohner harmonicas and to enjoy the easy, breezy sounds of The Captain’s Son, Pleiades, and Snowball ii. EZ-ups provided designations for DIY instruments, face-painting, and live painting by OC Laureate Salina Mendoza. A growing Sousapalooza mass appeal filled the early evening with brassy Sousa compositions. If you stayed until the last band, Midnight Peacemaker, you might have been included in Disney’s filming of one of their Encore! episodes. 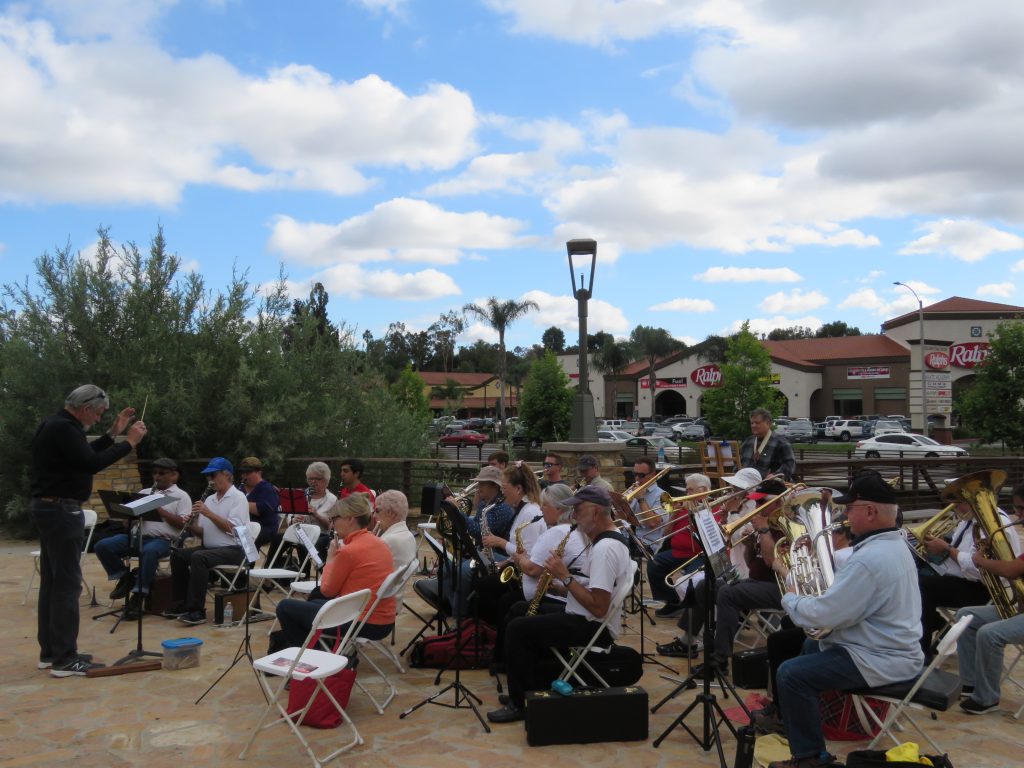 Further promoting the celebration of summertime was Tillamook Creamery, posted at the Fullerton Museum Plaza with their Insta-worthy Yum Bus and a scooping station. As free ice cream flights were being doled out, bands like Last Call OC, Sean Oliu, and The Cornfed Project rocked out the main stage fervently. In between sets, kids gleefully took to beating on bright orange bucket drums and a seniors flash mob pounced on an unsuspecting crowd. The beer garden was abuzz with folks enjoying Bootlegger’s Mic Check, the special event beer for Day of Music, while throngs lined up to take selfies on the newly painted crosswalk piano keys.

An hour before sunset, the Mardi Gras Boombox Parade sashayed from Bourbon Street into downtown proper. Ghetto blasters, both functioning and prop, were hoisted on shoulders as the Dixiedelics Jazz Band, playing tributes to Dr. John, led the merry makers through the walkways of cheering spectators. 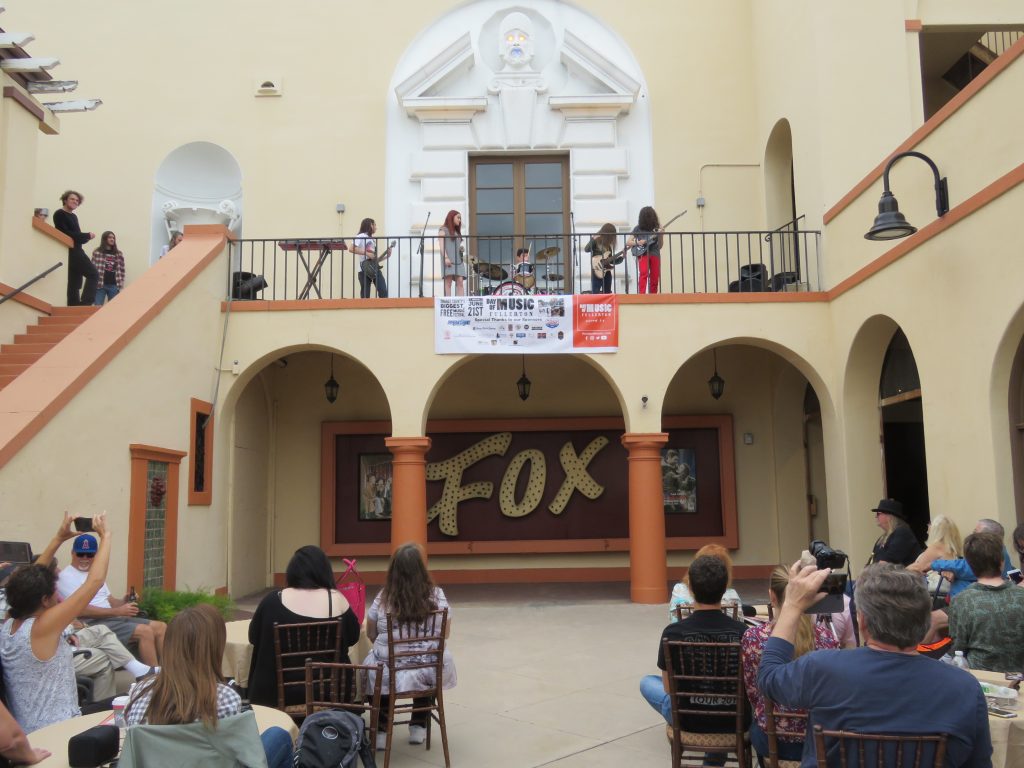 The historic Fox Theatre lit up orange in alliance with all the Make Music Day landmarks around the world. Despite still being under renovation, it was alive again for one day to screen the global live feed of other  MMD fêtes and to showcase such acts as The School of Rock, Melissa Farrior, and Lady Zep. But what really raised the roof was a spectacular set by 80s pop star Stacey Q. As soon as the intro to her hit single “Two of Hearts” began, throngs of fans rushed and joined her onstage for a massive dance party that was no doubt the highest point of Day of Music this year.

Visit www.thedayofmusic.com to view more photos and other information.