City councilmembers and many residents who live in the neighborhood around Fullerton College expressed opposition to the proposed stadium at Sherbeck Field at the June 18 council meeting, citing the impacts on traffic, noise, and light outlined in the recently-released Draft Environmental Impact Report (DEIR). The report acknowledges the stadium would significantly impact noise and traffic, and mitigation is not possible.

The city is preparing a formal comment letter regarding the proposed stadium, which will include input from council members, as well as members of the public.

Stephen T. Blount, who is on the NOCCCD Board of Trustees, spoke against the project.

Ken Bane, who represents 568 neighbors who have stated their opposition to the project, expressed concerns about traffic and other impacts on the neighborhood. He said that that the city has land use authority over non-classroom uses of the college property, and that the college should have to go through the usual city approval process. 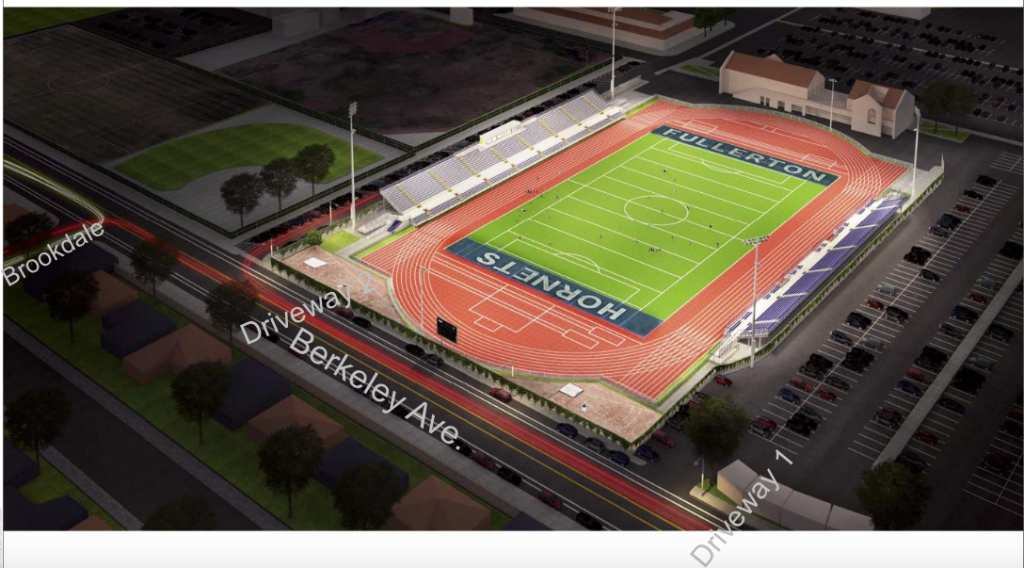 Cleverly, Fullerton College evaded this requirement by claiming that the stadium will be used as an “outdoor classroom.”

Clay Gaetje, who read the entire 4,000 page DEIR and wrote an insightful critique of it in the mid June issue of the Observer, said, “ This is really about control. The district wants complete autonomy to do what it wants. They don’t want to share a stadium. It’s claiming an exemption they are not entitled to. A community college district is not a school district, and a stadium is not a classroom.”

“Please tell Fullerton College they are not exempt from the city’s laws just because they call their stadium a classroom,” said Damion Lloyd.

One resident pointed out that this is the fourth time Fullerton College has tried to build a stadium, despite the neighbor’s opposition.

Another pointed out that the Fullerton College football team is actually on probation for violating California Community College Athletic Association rules. The team was forced to forfeit its 2017 season wins, consequently losing the national championship and forfeiting its 2018 victories due to ineligible players that were on their roster.

Sean Paden pointed out that the money being used for the stadium (Measure J) was actually supposed to be for veteran’s services.

Chris Gaarder, who is on the Fullerton Planning Commission, said that he’s spoken to members of the High School district board, and they’re eager to allow Fullerton College to use their stadium, which is right across the street.

Before council discussion, Mayor Jesus Silva had to recuse himself because he lives within 500 feet of Fullerton College.

All four of the remaining council members expressed deep concern with the project, if not outright opposition.

“It would be my interest to communicate back to the college that we intend to protect the interests of the residents in the existing neighborhoods to the extent possible,” said councilmember Whitaker.

Councilmember Jan Flory was perhaps the most vocally opposed to the project.

“This project is so egregious, is so out of scope with the rest of the neighborhood,” said Flory, who echoed residents concerns regarding noise, light, and traffic. She also said that the impact on city infrastructure (roads, etc.) ought to be included in the report.

Mayor Protem Jennifer Fitzgerald said that the DEIR inadequately includes public input, and it inadequately identifies alternatives, like using the Fullerton High School Stadium, or the CSUF stadium. She said that the stadium project should have to go through a local planning process because it is not a classroom use.

Council member Ahmad Zahra said, “I’m not seeing the benefit for the city on this one. It’s a one-sided business deal.” He suggested council Include in its comment letter that the city does not benefit economically from the project.

City Attorney Richard Jones said that the College is the primary decider on the project, not the city council. Council can provide comments, which the college is required to respond to in their final EIR.

This input from council and residents, will be submitted to the district. The public comment period for the DEIR ends on June 28. For more info visit www.fullcoll.edu/campusprojects/projects.