At their July 2 meeting, Fullerton city council voted 3-1 (Whitaker “no,” Fitzgerald absent) to declare an emergency shelter crisis regarding homelessness, to solicit proposals for a “safe parking” program for people living in their cars, and to establish an Ad Hoc Homelessness Task Force to develop a coordinated response to homelessness in our city.

Council chambers were filled to overflowing with hundreds of members of the faith/non-profit community, who were there to encourage council to take these actions, as well as others, such as building a homeless shelter in Fullerton, and to use city-owned land for the development of permanent supportive housing for the homeless. 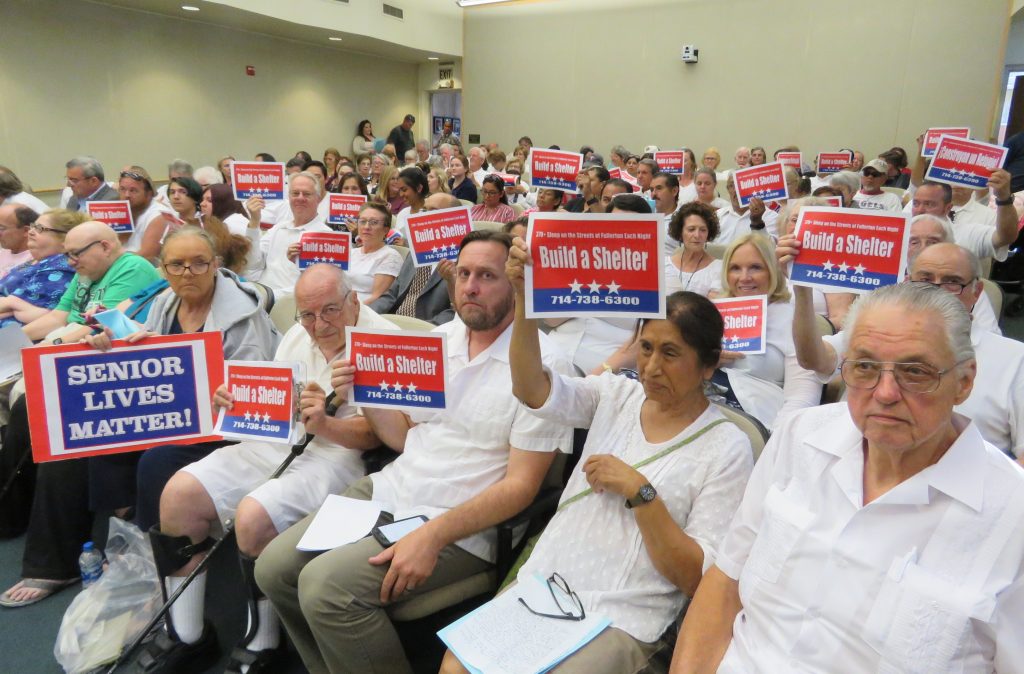 Council chambers were filled to overflowing with those supporting the council’s actions.

In the past two years, Fullerton’s unsheltered homeless population has doubled from 149 to 308, according to the most recent 2019 “Point in Time” homeless count. According the city’s own report, “Orange County, along with the state and nation, is in the midst of a homelessness crisis.”

For 2019-20, the city is budgeted to spend $481,076 in direct costs addressing homelessness, which includes police and library security. In addition, approximately $129,223 of Community Development Block Grant (CDBG) and $310,000 from the North Orange County Public Safety Task Force are dedicated to addressing homelessness.

Fullerton has also partnered with 12 other cities in north Orange County to establish two homeless “navigation centers” (shelters with social services)—one in Placentia and one in Buena Park that are expected to open in December of this year—using state funds.

The purpose of declaring a “shelter crisis” is to to temporarily relax certain regulations, to expedite the process of creating housing for the homeless, particularly on city-owned land and facilities.

The city manager is currently working with the county to re-open the Fullerton Armory shelter as early as September 1, as an emergency shelter until such time that the two navigation centers in Placentia and Buena Park are open.

Before council discussed these items, many members of the faith/non-profit community in Fullerton spoke of the need to take these measures to provide solutions for those currently living on the streets, and in their cars in Fullerton. 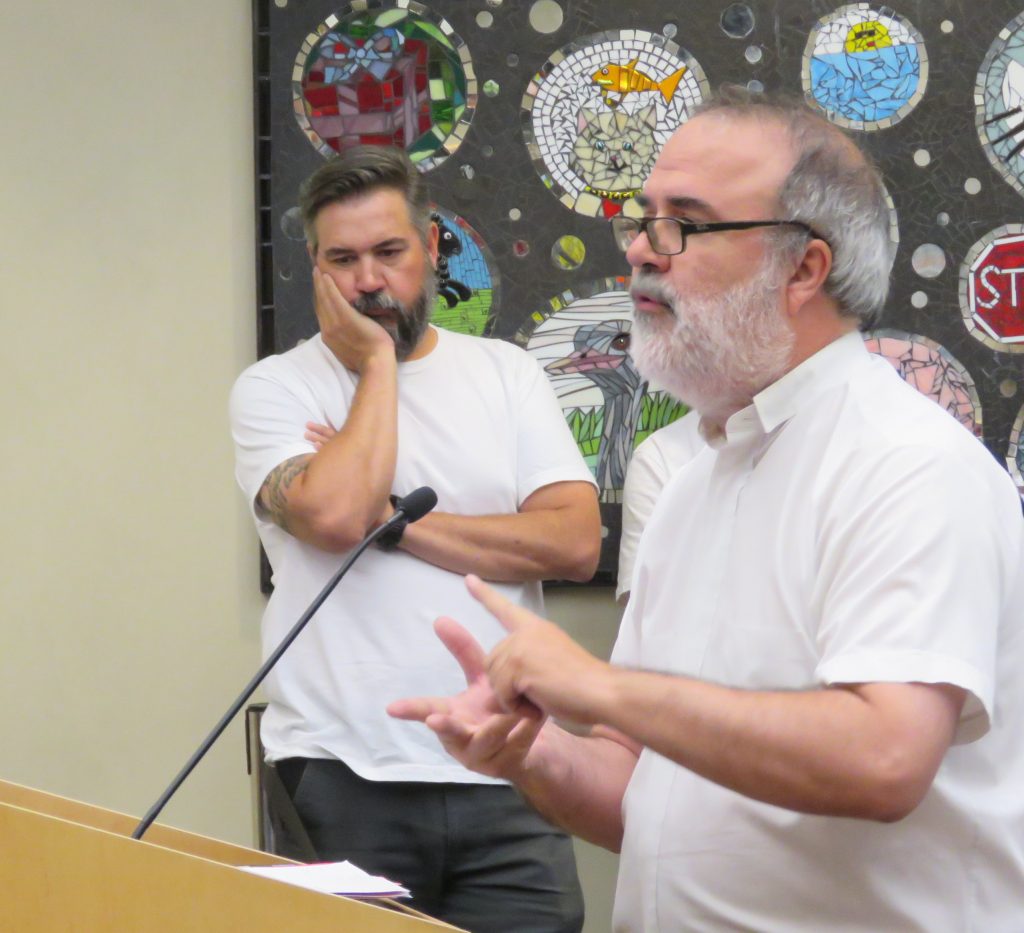 Father Dennis Kriz, pastor at St. Philip Benizi church in Fullerton has, until recently, allowed a certain number of homeless people to sleep on his church grounds.

“Four different times during the past year and a half people have dropped to their knees in front of me asking for help, saying they had no place to go,” Kriz said, “If you do nothing, you will have between 250-270 people on the streets. That’s what you’re looking at.”

Barbara Johnson, who co-founded the Fullerton Interfaith Emergency Services (now Pathways of Hope) over 40 years ago, said, “I’m counting on you, my city council, to go ahead and adopt this ad hoc committee, to go ahead with the safe parking plan, to go ahead and bring about a better condition. I turn 90 next year, and I still have hope…we can bring those things to fruition.”

Diana Trout, a leader of the with Tri-Parish Homeless Collaborative (which includes members of St. Philip Benizi, St. Juliana, and St. Mary’s churches), pointed out that, in addition to the Point in Time unsheltered, there are also hundreds of school-age homeless children, who are classified differently (under the McKinney-Vento Homeless Assistance Act).

An outreach coordinator for a local St. Vincent de Paul program said, “For the last 8 years, we have met with hundreds of families living in their cars. We see the invisible homeless. Like Gregory and Valerie and their three children living and working out of their car…What is amazing is that these men and men and women living in their cars are working. We support a concrete plan for safe parking.”

“I believe the solutions developed by Fullerton are not commensurate with the scale of the crisis,” said Richard Doubleday, a leader of the Tri-Parish Collaborative, and a member of the Fullerton Interfaith Ministerial Association (FIMA). “The approach of paying other cities to take into shelters those living on our streets is totally inadequate. This approach has left close to 400 people still living on our sidewalks and in our parks. We need shelters in Fullerton that provide 24/7 total assistance.” 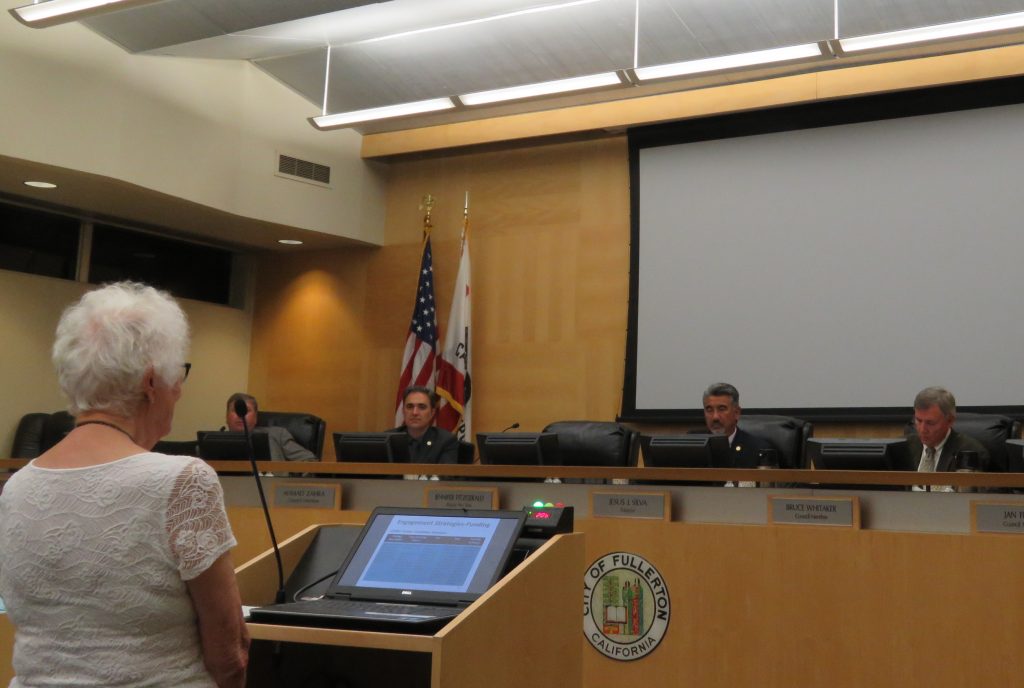 Barbara Johnson has been working to help the homeless in Fullerton for over 45 years.

“There are hundreds of homeless people living on our streets, in our parks, and right of ways,” said a Deacon at St. Philip Benizi. “If that doesn’t qualify as a legitimate crisis, I don’t know what does.”

He, along with others noted that “safe parking” programs for those living in their cars are currently working in Los Angeles, San Diego, Santa Barbara, and other cities.

“Let’s stop talking about programs for our suffering homeless brothers and sisters, and take action now to provide shelter and medical support,” said a deacon at St. Juliana.

“The homeless population in Fullerton increased by 34% in a 10-month period from March of 2018 to January 2019. At that rate, by this time next year there will be 680 homeless people in Fullerton,” said Fullerton resident Harry Langenbacher, representing Housing is a Human Right OC. “We need a shelter or a navigation center of our own in Fullerton to take care of these hundreds of people…Shelters are not housing and they do not solve homelessness, but hopefully they can keep these people alive until they can find housing.” 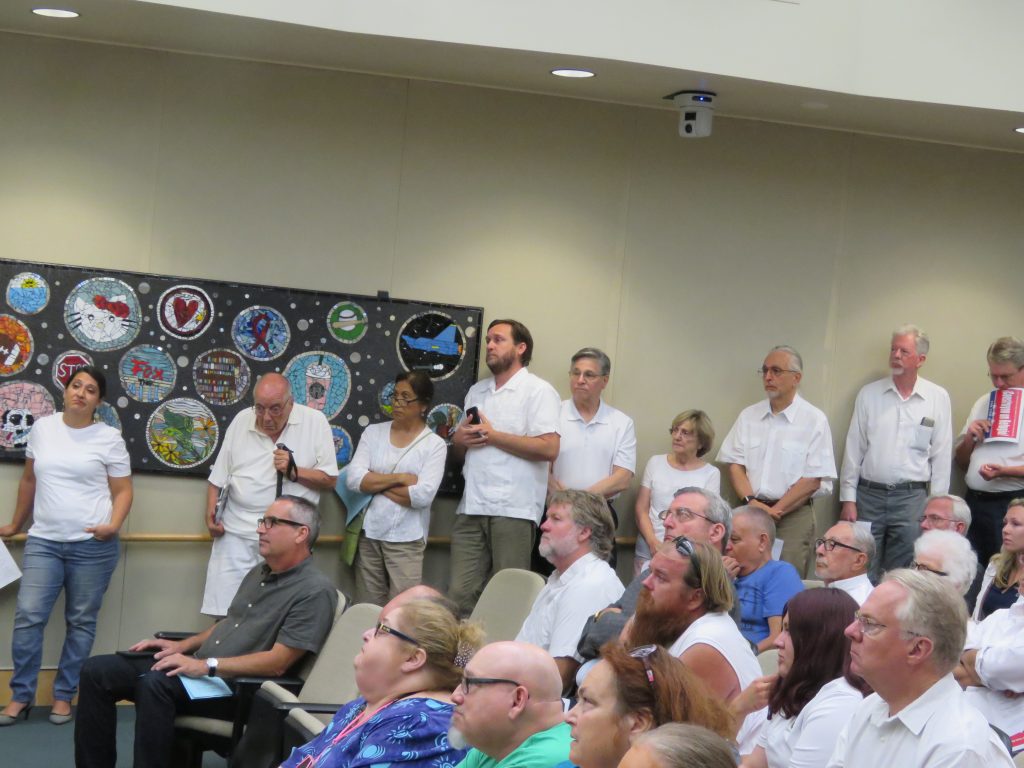 Members of the faith/non-profit community line up to speak to council.

Mandye Yates, senior pastor at First Christian Church in Fullerton, and president of FIMA, said “Those of us in white shirts are from faith communities, but here’s the interesting thing: we’re not all the same. We’re from protestant and catholic, liberal, conservative, Jewish, Muslim, Unitarian. We rarely agree on anything…but we agree that there is a crisis of homelessness in our city, and we agree that we want to be allies wth you…We refuse to throw up our hands and say, ‘The problem is too big for us.’”

Jay Williams, director of OC United, said that, while the proposed shelters in Buena Park and Placentia are commendable, “it’s woefully inadequate the meet the needs according to the most recent counts…let’s identify properties for housing.”

Dr. Jerome Hunter, former chancellor of North Orange County Community College District, noted the impact that the housing crisis is having on students in higher education, with a significant number of local college students living in their cars.

Mayor Jesus Silva, who requested that these proposals be agendized, said that, while the city has limited funding, “We can still take action. We’re looking for creative ideas, working with nonprofits to try to find a building and get that up and going.”

Council member Ahmad Zahra, who supported the proposals said, “The issue of homelessness is not just about getting beds for people who are on the street, but also preventing more people from becoming homeless. We have families living in their cars, living in motels, living in garages, doubling up with other people. This is a crisis of really mega proportions, and it’s beyond what we see on the street. So I’d like to look at what is it in our power, as a local entity, to do.” 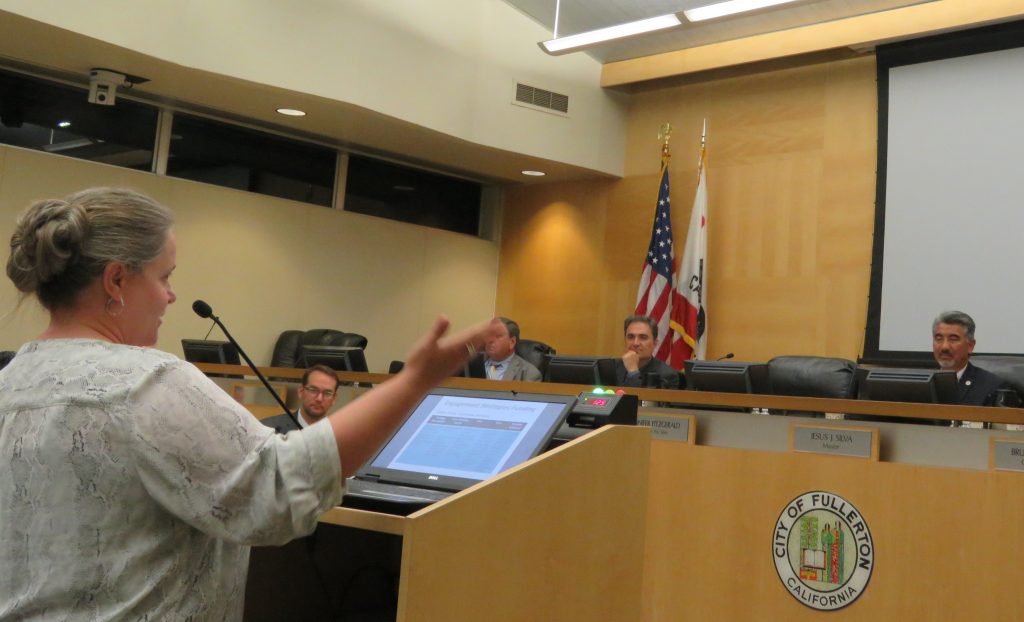 Council member Flory made the motion to approve the items, with some clarifying language.

Council member Bruce Whitaker voted against the proposals, saying that “law drafted in the heat of the moment is seldom wise and often causes collateral damage.”

He also took issue wth the fact that during a shelter crisis, planning, zoning, safety standards and procedures, may be suspended, which would “wipe away the protections that property and business owners rely upon.”

Mayor Silva responded, “I don’t want to put this off any more…This is the the time when we need to take a step, send a message, and let people know that we’re willing to take action.”

Councilmember Zahra asked Whitaker, “Are we only just going to oppose things without offering any alternative? If permanent supportive housing is an alternative to this, why haven’t past councils, which Mr. Whitaker you were on for eight years, why hasn’t any action been taken?”

“Councils have had neither the responsibility nor the funding ability to deal with social problem issues,” Whitaker responded.

Zahra replied, “This is a human crisis in our city…we need to take action.”