Film Review: “Late Night” gets a Hit and a Miss

Billed as a comedy, “Late Night” is more ironic than funny. Setting out to make the case for TV needing more women and more diversity in its writers and late night performers, the movie, nevertheless, features a female late-night talk show host, who has earned several Emmys during her 28-year run yet is now about to be cancelled.

Katherine Newbury (Emma Thompson) is riding on the laurels of her long-running show and has gradually become stuffy and rigid, losing her appeal to younger audiences. Katherine eschews social media and has insulted a young female guest who has gone viral with her u-tube performance. The new network president, Caroline Morton (Amy Ryan), tells her that her guests are too intellectual and that her writers are no longer funny or relevant.  She also needs more diversity both on-screen and off.

We meet her writers, a roomful of young-to-middle-aged men, many of whom have never met Katherine. The show’s beleaguered producer, Brad (Denis O’Hare), is trying to hire at least one female writer and, under pressure from a worried Katherine, hires an inexperienced but racially diverse Molly Patel (Mindy Kaling).  Most young writers have come from stand-up comedy stints, but Molly’s prior job was doing quality control at a chemical plant, where she entertained the workers on the floor with ongoing comedic remarks over the plant’s loudspeaker.

Under threat of losing her job, Katherine begins visiting her writers’ work room, but instead of calling them by their names, she assigns them numbers based on their seated positions. She does not even take kindly to the newly hired Molly, nor do the writers. A hierarchy has evolved among the writers, as Tom (Reid Scott) keeps reminding everyone that he is the talent who writes Katherine’s daily monologues.  The only writer kind to Molly is Charlie (Hugh Dancy), but his intentions are more predatory than professional.

Because she is on a 13-week contract, Molly works hard to prove her value as a comedy writer, but Katherine is slow to use any of the material she writes. She still seems stuck in her rather arrogant, upper-crust mannerisms, but afraid of losing her job, Katherine finally seeks advice from a professional, who encourages her to get to know her writers by name and to invite them to her home on social occasions.  One of her writers had died three years previously, and she had not even been aware of his absence.

The focus of Katherine’s life has always been her professional career. Her family consists of a loving husband (an excellent John Lithgow), but he is several years older than Katherine and has been diagnosed with a debilitating disease. An incident occurs that threatens their marriage and Katherine is reeling under the possibility of losing his loyalty and affection and losing her job.

A quote from a Yeats’ poem—“Tread softly because you tread on my dreams”—is spoken by Molly, yet the sentiment applies to both women. Gradually, Katherine allows Molly some space in her life and the two women bond from a sincere affection for television and its continuing relevance in the twenty-first century.

The screenplay for “Late Night” reflects some of the aspirations expressed in the movie itself. With some television experience in her career, Kaling wrote the screenplay with Emma Thompson in mind as Katherine and herself as Molly.  She is generous enough to give Katherine all of the best lines, knowing how superb Thompson is at delivering clipped and cutting lines that would reflect the hauteur of her character.

“Late Night’ was directed by Nisha Ganatra, who keeps the pace of the film lively and the characters believable. However, what the film lacks is humor. Billed as a comedy, “Late Night” has heart but few lines that invite laughter. 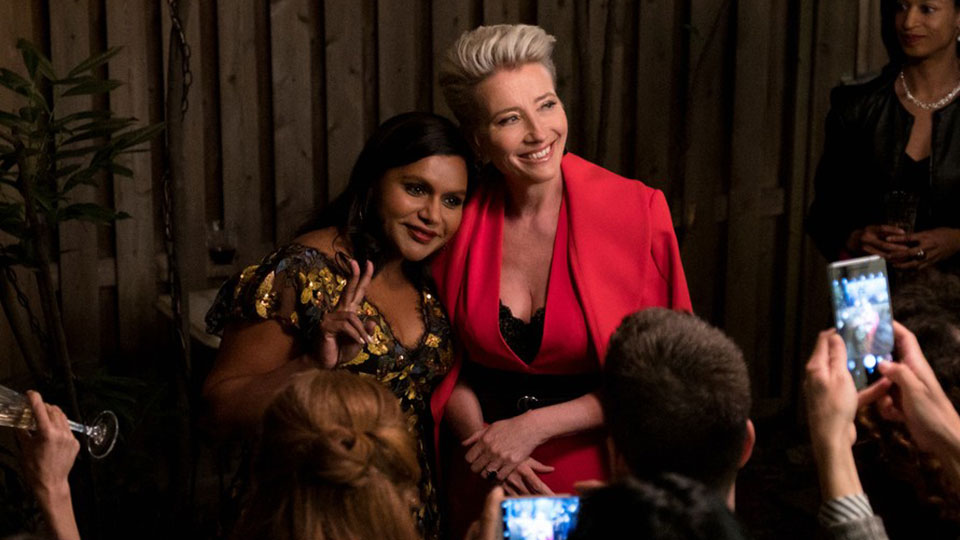