Film Review: “Once Upon a Time in Hollywood” gets Two Hits

Not since Robert Redford and Paul Newman shared the screen in “Butch Cassidy and the Sundance Kid,” have two major actors combined their star power to create a movie so filled with action, suspense, camaraderie, and surprise. Leonardo DiCaprio and Brad Pitt, each a bona fide movie star, create in “Once Upon a Time…in Hollywood” riveting scenes, both acting on their own and in scenes together, where their contagious energy  and ebullient spirit envelope the audience. 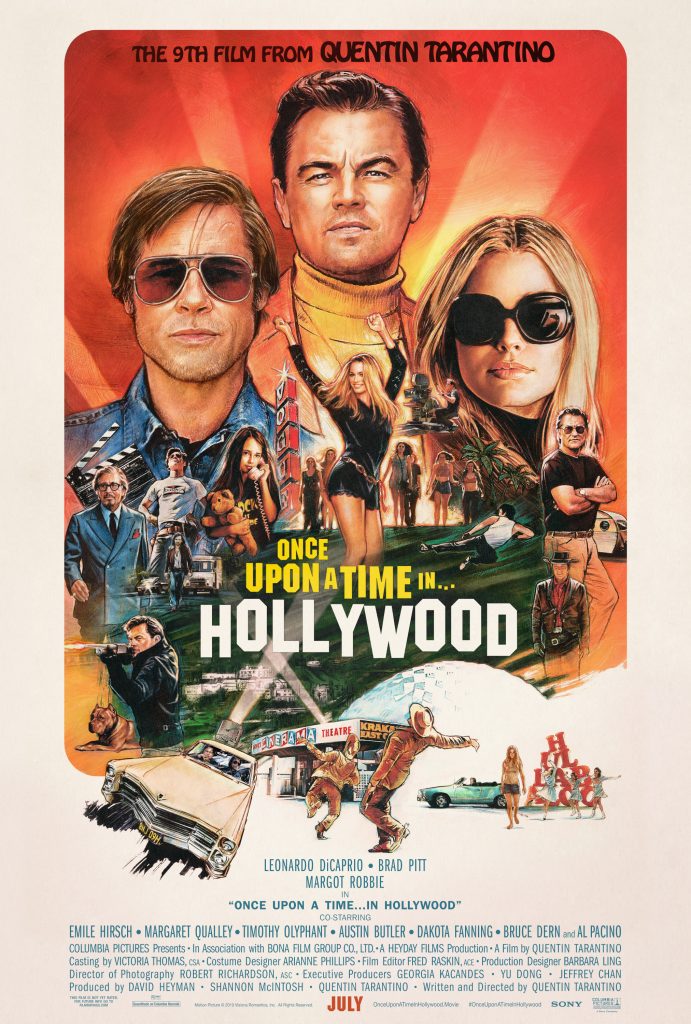 Helping these stars perform this magic is writer/director Quentin Tarantino, who likes to say that he never went to film school but he “went to films.” He nails Hollywood movie tropes, then removes their cliches and makes them serve his own unique purposes. Tarantino also manages movie magic in the tone he maintains throughout his films, balancing both humor and malevolence at the same time.

Another hallmark of many Tarantino films is his fusion of real-life persons and events, often from the past, with his own fictional characters.  This strategy was most significant in his 2009 movie “Inglourious Basterds” in which Hitler was an off-screen presence, and Tarantino played fast and loose with history by re-writing his own ending rather than presenting historical reality. This idiosyncratic strategy also occurs is “Once Upon a Time” when Charles Manson became a menacing presence during the summer of 1969.

TV actor Rick Dalton (DiCaprio) has gained fame and popularity as the star of a hit Western show called “Bounty Law,” but the show is almost over, and Rick worries about his future as a Hollywood actor.  He lunches at Musso & Frank with his agent played by Al Pacino (at his unctuous best), who advises him to restart his career by taking leading roles in the new Italian genre “spaghetti Westerns.” Rick ponders this unusual career change through much of the movie. He is happy living in Hollywood, where his next door neighbors are esteemed director Roman Polanski and his glamorous wife Sharon Tate.

Rick also has an intense loyalty to Cliff Booth (Brad Pitt), Rick’s stuntman in all of his films. The two men have bonded and especially now, because Rick has lost his driver’s license and Cliff does double duty as his driver. The two enjoy each other’s company as they share problems and jokes in the front seat of Rick’s over-sized Cadillac. Cliff likes hanging out at Rick’s beautiful home with a pool and a view on Cielo Drive in the Hollywood Hills. By contrast, Cliff’s house is a mobile home parked in a field next to an outdoor theater, where his only companion is his loyal pit bull.

One of the strengths of “Once Upon a Time” is the balance that Tarantino gives to the screen time each of his two stars has throughout the movie. Often blending his characters’ real lives with the parts they are playing within their films, we see a particularly poignant scene between Rick and a little girl on the movie lot, each waiting to go on screen. The child (expertly played by Julia Butters) projects a calm self-assuredness that contrasts sharply with the more experienced Rick, who is now nervous about his future and is even beginning to forget his lines. The scene is soft in its tone and ironic in its message.

Cliff has a more comic moment on the movie lot when waiting around to perform his stunt, he meets up with martial-arts master Bruce Lee (Mike Moh).  The egos of both men demand that they challenge each other’s toughness. The result is gripping yet understated in its humor. Cliff also has a less humorous but more menacing scene as he enters the Spahn Ranch, now populated by Manson followers, in search of his old friend George Spahn (Bruce Dern). We are rooting for Cliff’s deftness, strength and quick thinking to overcome the odds against him.

Also walking the line between fiction and reality is an unexpectedly charming scene in which Sharon Tate ( Margot Robbie) goes to a Westwood bookstore to purchase for her husband a book she knows he will enjoy—“Tess of the D’Urbervilles,” then goes to a Westwood movie theater to watch her own performance in the film “The Wrecking Crew.” We share in her joy as the audience laughs in all of the right places and she feels proud of her work in that movie.

“Once Upon a Time” lasts two hours and forty minutes. The final 20 minutes have become controversial both in the use of violence (a Tarantino trademark) and in its revisionism. But moviegoers used to Tarantino, the auteur, will find this movie well worth their time and the cost of their ticket.