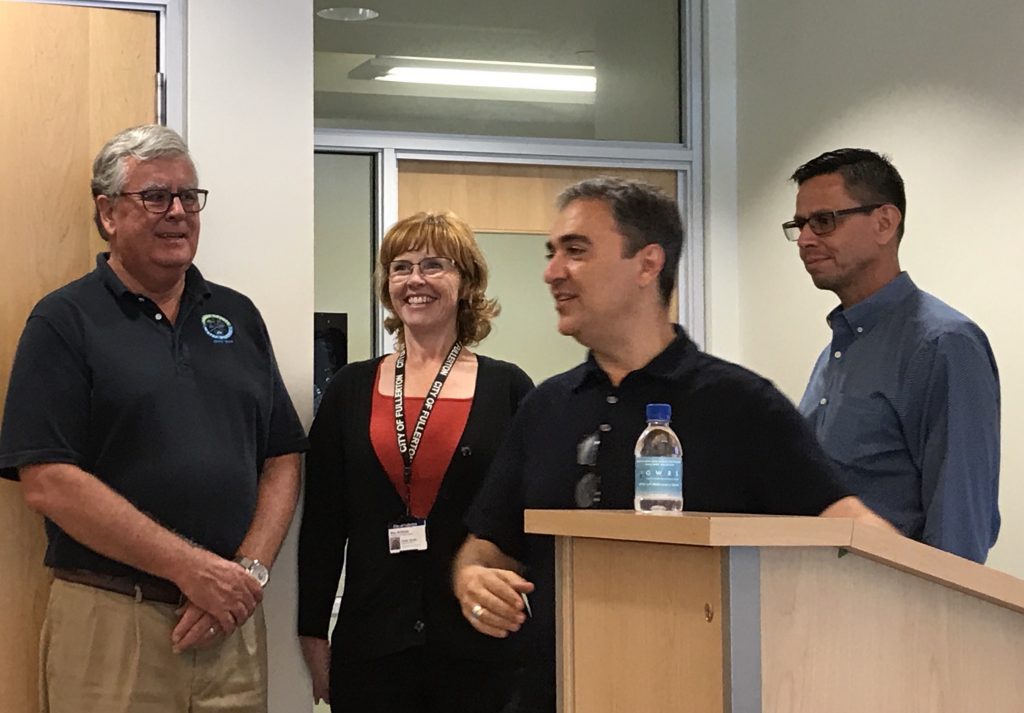 McWade discussed the sources of Fullerton Residents’ water, the goals for Fullerton’s Water System since the water rate changes that went into effect on July 1, and answered questions from the audience.

Fullerton residents in the southern region of the city from Brookhurst to the city’s eastern boundary below Valley View and continuing east along Dorothy Lane, receive 100% groundwater pumped and treated by the city. Residents in the southwest part of the city, west of Brookhurst, and those between Valley View and Rosecrans, west of Harbor, as well as CSUF and some nearby areas receive a blend of groundwater and water imported and treated by MWD. 100% of the water provided to residents generally, north or Rosecrans, Brea Blvd, and Dorothy Lane is sourced from MWD.

Fullerton’s goal is to replace 9 miles of water mainlines per year beginning in 2024. Other improvements include booster pump upgrades, emergency pumping power, implementing SCADA (supervisory control and data acquisition) to monitor and analyze water system data, well and reservoir rehabilitation and replacement, and a Water Master Plan. The Master Plan will be developed by a contractor over 1 to 2 years and will “outline priorities for investment.”

Fullerton residents appointed to INRAC (Infrastructure and Natural Resources Advisory Committee) will provide oversight of where and how the Fullerton Water System’s money is utilized. INRAC will review an annual report and can recommend that the City Council delay already approved water rate increases if water system goals are not met or reserves become excessive. Zahra said he would not have approved the water rate increases “without transparency and accountability.” 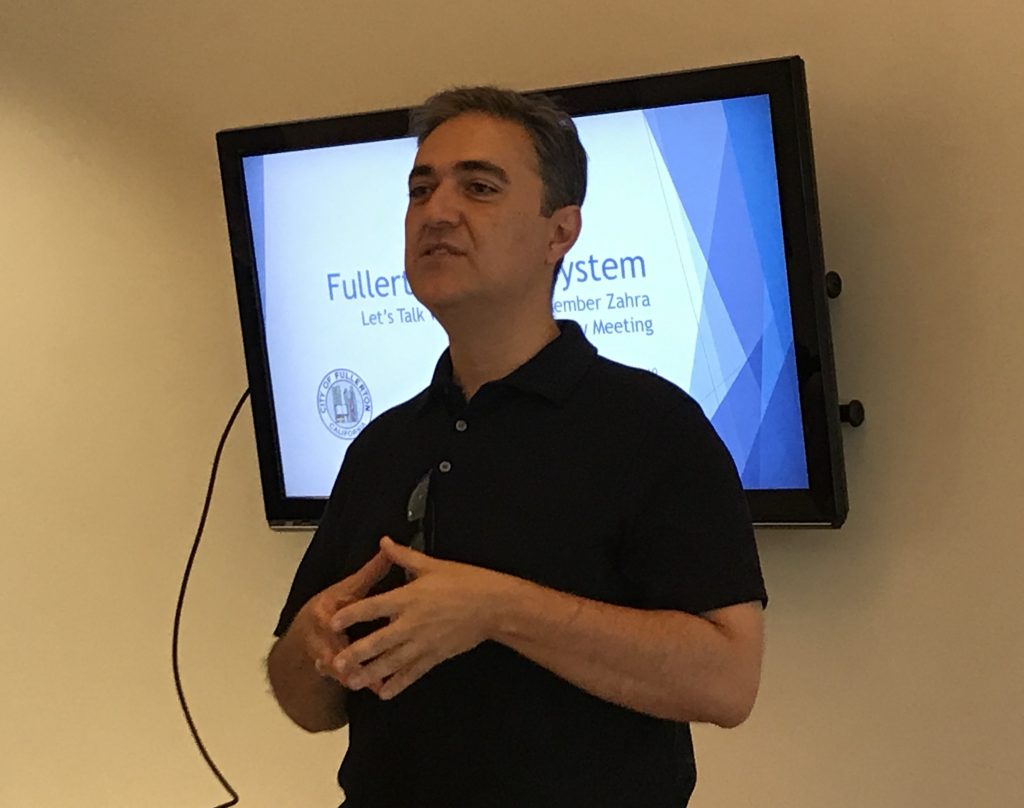 Additionally, annual water rate increases may be reduced if other funding sources, such as grants or opportunities to partner with OCWD or MWD, reduce the cost of some planned projects. In response to concerns from the audience, Mayor Silva said ,”We’re not going to play any games. We are going to use money wisely.” McWade explained that the 1990’s California Proposition 218 does not allow water payment money to be put into the city’s General Fund and limits water payments to only cover the cost of providing water.

INRAC member Dr. Mark Shapiro asked whether the city is monitoring lead in water at the tap in homes built in the 1920’s when lead would have been used in the lateral connection to houses. McWade said that the city is required to test for lead at residents’ tap. Residents can volunteer to allow the city to test the water in their homes.

Residents also asked McWade about the impacts of the volatile organic compound (VOC) contamination plume on Fullerton’s water extraction wells. McWade said that the new deeper wells are below the principal aquifer and avoid the “plume” but present “other water quality issues,” that the OCWD Director Markus discussed later.

Markus described how OCWD manages the groundwater basin from which Fullerton pumps 75% of its water. He described OCWD as a water “wholesaler” and the city as the “retailer.”

The primary source of groundwater in the basin is the Santa Ana River (SAR). When it rains, the Prado Dam captures SAR flow. OCWD slowly releases water from behind the dam and diverts it into recharge basins in Anaheim where the water percolates into the aquifer. 15% of the groundwater basin is recharged with untreated water that OCWD purchases from MWD at a lower cost than treated water, that is naturally filtered as it percolates into the basin.

One third of the groundwater basin is recharged by OCWD’s Groundwater Replenishment System (GWRS) that uses a 3-step process to filter and disinfect water processed by the Orange County Sanitation District. Markus described it as a “continuous and dependable source” of water that allows OCWD customers to pump water from the basin “at a high level” without shrinking the aquifer’s storage capacity.

The 100 million gallon per day (mgd) GWRS is paid for through the pumping rates OCWD sets for the water retailers ($485 per acre foot, which is about half the cost of treated water purchased from MWD). OCWD is expanding GWRS to provide an additional 30 mgd and that cost will also be passed on and ultimately paid for by Fullerton’s water customers. 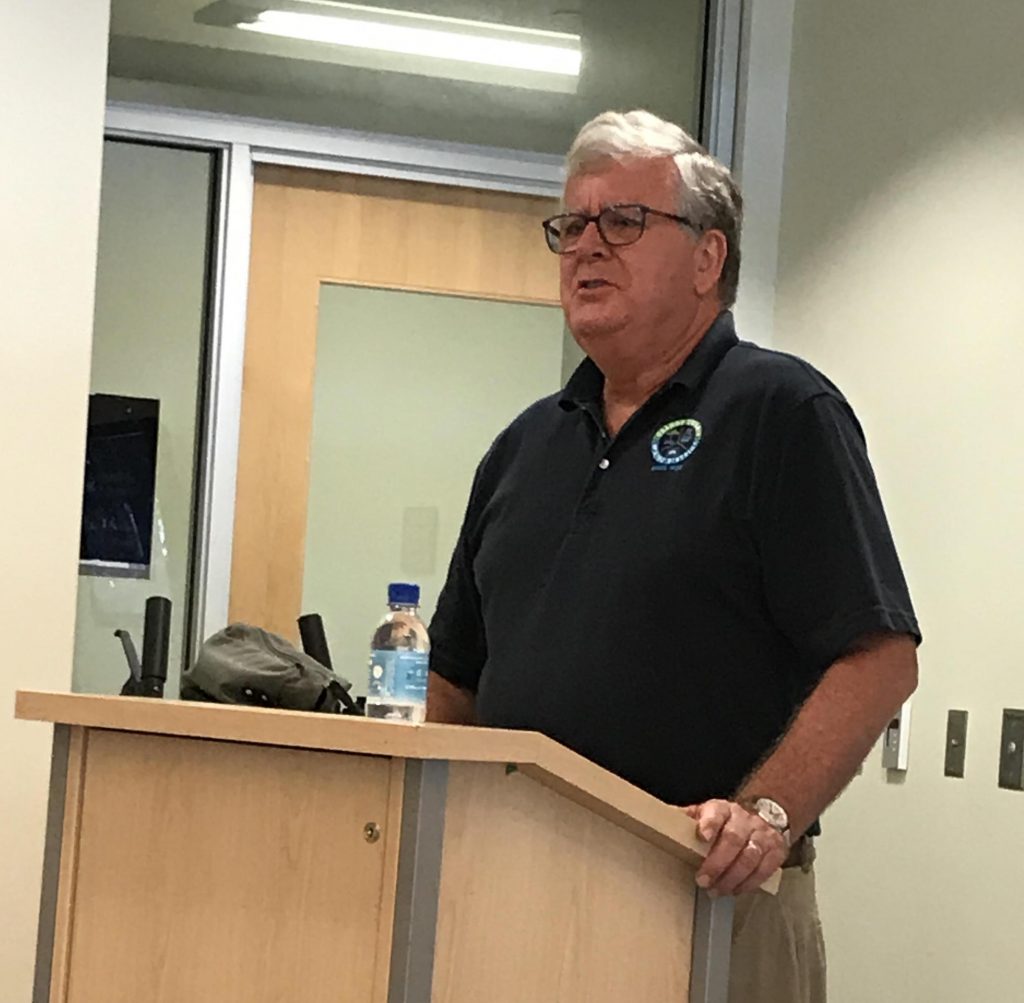 Elizabeth Hansburg, Zahra’s appointee to Fullerton’s Planning Commission, asked whether the water used to recharge the basin is contaminated by the basin. Markus explained that the recharge actually helps to dilute contamination.

The North Basin VOC plume is between Commonwealth and the 91 Freeway and runs from the 57 Freeway to Brookhurst. Contaminants that had been contained within the shallow aquifer are now found in the principal aquifer in higher concentrations than before. The source is aerospace and manufacturing sites where VOC’s leaked or were dumped into the ground.

Though OCWD won on appeal, a law suit against Northrop Grumman it is still bogged down in settlement talks. After a $5 million settlement with Aerojet, OCWD installed the first extraction well known as EW-1 at State College between Commonwealth and Orangethorpe. It pumps contaminated water into the sewer where it is treated by the Sanitation District before being recycled into drinking water.

The total cost of cleanup for the entire area is estimated at $150 million, increasing the cost of pumping OCWD water by 10%. OCWD is awaiting a decision by the Environmental Protection Agency by April 2020 to list the area as a superfund site. In the meantime, OCWD is studying remediation options. They have installed 14 monitoring wells and have modeled groundwater flow and transport.

The day prior to the community presentation, August 23, California’s State Water Board announced new more stringent detection and reporting levels for PFAS “to assess the scope of contamination of drinking water supplies by PFOA and PFOS.” As stated in the release, “Notification levels are a nonregulatory, precautionary health-based measure for concentrations in drinking water that warrant notification and further monitoring and assessment.”

PFAS (Perfluoroalkyl and Polyfluoroalkyl substances), including PFOA and PFOS which, “were routinely used in greaseproof coatings for food packaging, stain-resistant coatings for carpets, clothing and furniture, and as an ingredient in coatings for not-stick cookware” according to the California State Water Control Resources Board FAQ.” In addition, these compounds have been used in fire-retarding foams and various industrial processes.”

Markus stated that the report used to set the new notification standard has not been peer reviewed. “I don’t mind being regulated as long as it is based on sound science.” He said that under the new response levels, 39 of the 51 wells in the basin could be shut down and cities would have to switch from ground water to more expensive  MWD water.

OCWD is certified to provide testing at the new lower detection rates. Fullerton tested 4 of 5 wells in April and May. PFAS has been detected at levels requiring notification and the city council was notified and the results have been posted on the city website.

McWade said she is “Waiting for regulations to be based on sound science” and the water system doesn’t have to change anything operationally unless the state adopts more stringent levels for the operation of wells. According to McWade at least 1 well could have to shut down if it did. Without redundancy to offset the loss, the city would have to go into conservation mode until changes in the infrastructure could support more imported water from MWD. Check the city’s PFAS page on the website, to get updated information.

PFAS has become a national issue, especially in the northeastern part of the country where there was exposure from manufacturing at much higher levels than are being detected in Fullerton water. 90% of US population has PFAS in their blood serum. Markus stated that OCWD is “getting ahead of the problem” by exploring methods to remove PFAS.

The status of the Poseidon desalination plant in Huntington Beach was not on the agenda but Markus responded to questions from the audience. He said that Poseidon is trying to get final permits from the SAR regional board at the end of year and the Coastal Commission in the summer of 2020. OCWD board members have approved a non-binding term sheet that prices Poseidon water at $1,700 per acre foot, twice the cost of MWD water and three times the cost of groundwater. It also requires OCWD to purchase water from Poseidon which would necessitate OCWD passing on the higher costs to water retailers, like Fullerton, for water they don’t necessarily need.

Markus explained that desalination is costly because, “It takes a tremendous amount of energy.” GWRS is more efficient because it only has to remove salts at 100 parts per million (ppm) while seawater is at 35,000 ppm. “It takes a lot more energy.” OCWD began using reverse osmosis in 1978 to clean sanitation water to levels not for drinking but for use in injection wells used to stave off salt water intrusion. Technology has improved since then, but the laws of thermodynamics have limits and desalination of seawater continues to be energy intensive.

Ortega provided an overview of MWD and talked about the cost of water for “disadvantaged communities.” 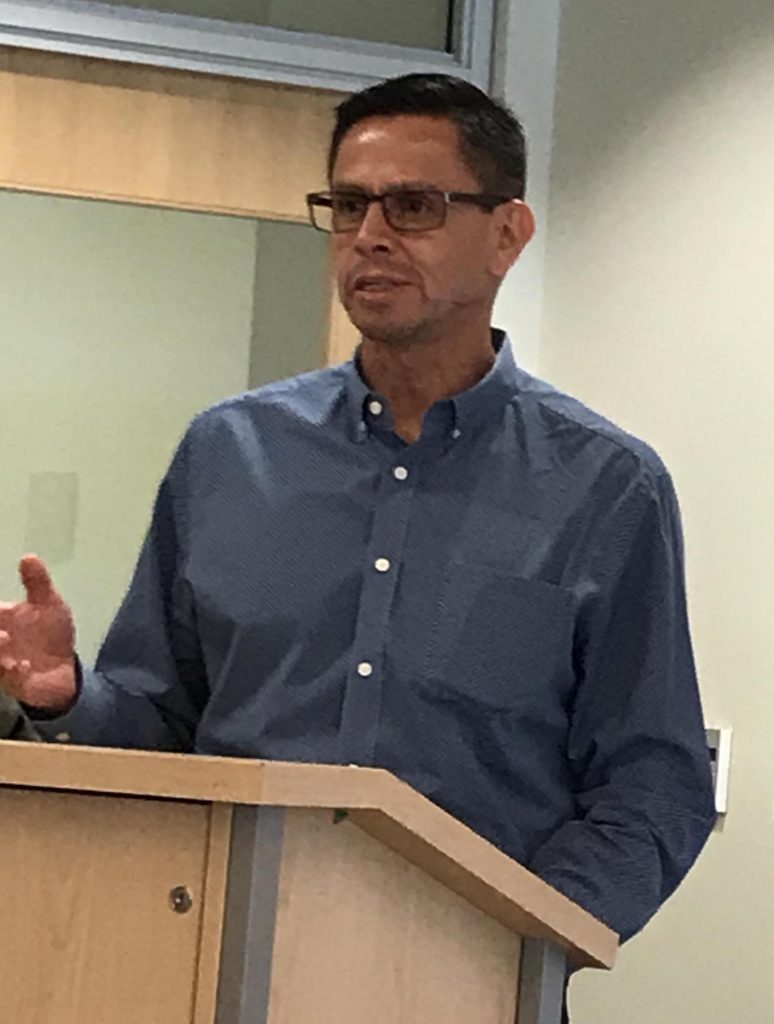 Adan Ortega, Fullerton’s representative on the board of the Metropolitan Water District.

MWD began in 1928. Fullerton joined in 1931. Prior to WW2, MWD was comprised of 14 cities. After WW2 any new cities who wanted to join had to form a municipal water district. There are now 12 water districts included in the 38 member board that represents 14 million people.

MWD has invested $1.4 billion in alternative local water sources through conservation, groundwater, recycling, and desalination of brackish water. MWD sales are down because of conservation and local projects like OCWD’s GWRS. In all, MWD customers use the same amount of water as in the 1970’s despite the population doubling.

Because over half the water used by MWD customers is “wasted” on in outdoor uses, MWD has rebates and resources to help its customers covert their turf. Be Waterwise.com is offering rebate money through the end of the year.

The state has identified 1 million residents in disadvantaged communities who don’t have access to safe drinking water. The governor signed SB 200 to shift $130 million from the Green House Gas Emissions fund to go towards remedying this problem.

The issue of water affordability is different in Fullerton. Ortega said the definition of affordable water is “when households are not trading off other needs to pay for water.” He said the cost of housing is the biggest impact on household, but the average cost of water is also growing faster than wages.

In 2012 AB685 stated a right to clean water with no means to provide it. AB401 then required the state water board to establish a low income rate assistance program. In response to the State Water Resources Control not yet establishing the assistance program, SB998 will go into effect in April 2020 to require a minimum of 120 days before water can be shutoff due to non-payment. In response, municipal water agencies are shifting from bi-monthly to monthly billing periods to start 120 day waiting period sooner.

Fullerton is still billing water customers every 2 months, but Ortega is asking for input on ways to help low income renters and homeowners to pay their water bills.