Electricity was in the air, and the Bowery in Downtown Fullerton was packed with family and friends as everyone gathered around the big screens, fortifying themselves with full plates of breakfast and armloads of camaraderie, waiting for the Little League Junior Division championship game for 13 and 14 year old players to begin. The Golden Hill All-Stars were undefeated in the four rounds of playoffs. They ran their record to 19-0 by beating Viera Suntree Little League 7-2, leading to this game against the International Champions from the Radames Lopez Little League in Guayama, Puerto Rico.

The game would produce the first world title for a team outside Asia-Pacific region teams from Chinese Taipei after they took it 6 years in a row. It would likely be the biggest contest in the lives of all of these kids, the one that would determine the world championship. Which team would learn a lesson in how to accept defeat gracefully, and which one would have their day of triumph?

Unfortunately, electricity was also in the air at Heritage Park in Taylor, Michigan, as an electrical storm moved in.  The game was in the third inning, and would be delayed until it was safe to retake the field. Most of the Bowery crowd simply finished breakfast and returned home, knowing the chances were good that the game would continue later in the day.

Was this a sign of impending doom? For one team it would likely go down as just that, but for the winners, it would just be a blip on the radar screen. The minutes and hours ticked away, patience was now on the menu. Finally, after three hours, the skies cleared and everyone returned.  The packed house was now a pizza and wings crowd.

If the Michigan skies were no longer threatening, the team from Puerto Rico was. With runners on first and third, the crack of the bat may as well have been a thunderclap as a scary fly ball sailed out to right field. To a nervous fan, every fly ball has homer written on it, to the Golden Hill team, it was a ‘can of corn’. No worries then, Andrew Wagner snagged it and threw home to cut down Nathan Martinez at the plate for an inning ending double play. Now it was time to begin systematically putting this one away.

Kyle Kim pitched 6 2/3 innings, put a chokehold on the Puerto Rico offense, plus had two hits and drove in a run. His dad, coach Ed Kim, played on the team from Rowland Heights that won the series in 1987. He was a shortstop and Kyle plays shortstop plus other positions in addition to pitching. Imagine the homecoming when they arrived via a free ride from FUHS alum Mike Afram in one of his shuttle busses. Everyone was chipping in to let the champs know how proud Fullerton was of this monumental accomplishment.

One of the league’s team Moms, Laura Campbell, was fixated on the screen, where so many kids and coaches she knew were living out their ultimate baseball fantasy. In particular, she was locked in on the above-mentioned Kyle Kim as the game ended. She had spent a lot of time in past seasons encouraging him and others to continue playing baseball, to hang in there and give it their best. Team sports are not for everyone. The league had done its job well over the seasons of learning, winning and losing, in the dugout and on the field, as everyone witnessed that day.

Other players had a big game as well. D.J. Garcia also had two hits, scored a run, and walked twice, and Eric Jeung walked three times. As was the case all season, and the reason they made it this far, the entire team contributed to a win, this one by the score of 8-3. This would be a day that would stay with them for a lifetime. World Champions, wow.

After the game, City Councilmember Jennifer Fitzgerald announced that a parade would be held on the following Thursday. It began at Lions Field and ended at the Museum Plaza (see photos below). Everywhere along the crowded parade route there were happy, cheering fans, friends, neighbors, family members and many hundreds of proud Fullerton residents who came out the support the team, filling the sidewalks and spilling out into Harbor Boulevard and Wilshire Avenue. The celebration continued at the plaza and it seemed like everyone was there. Maybe you will spot yourselves in the confetti covered crowd. 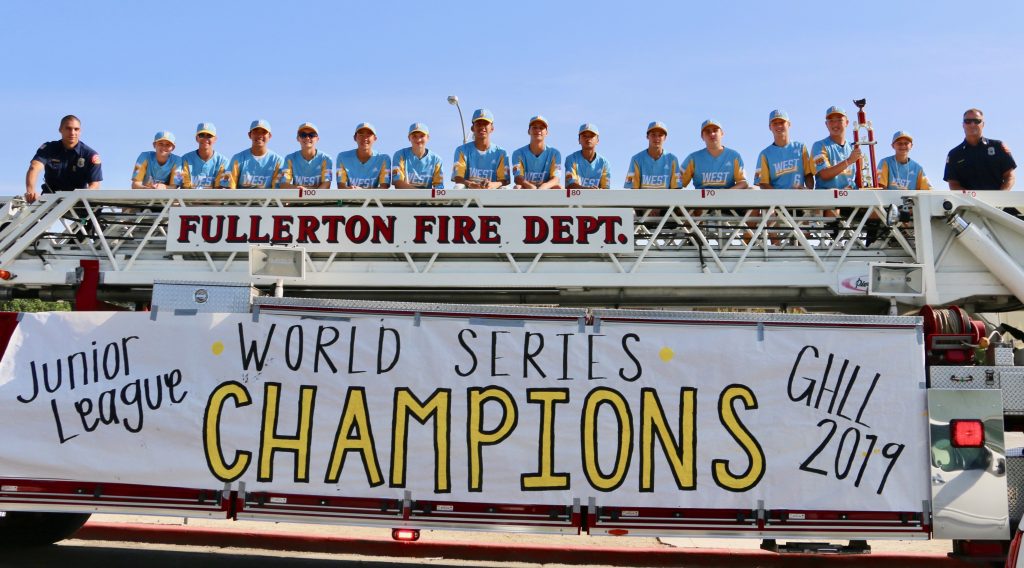 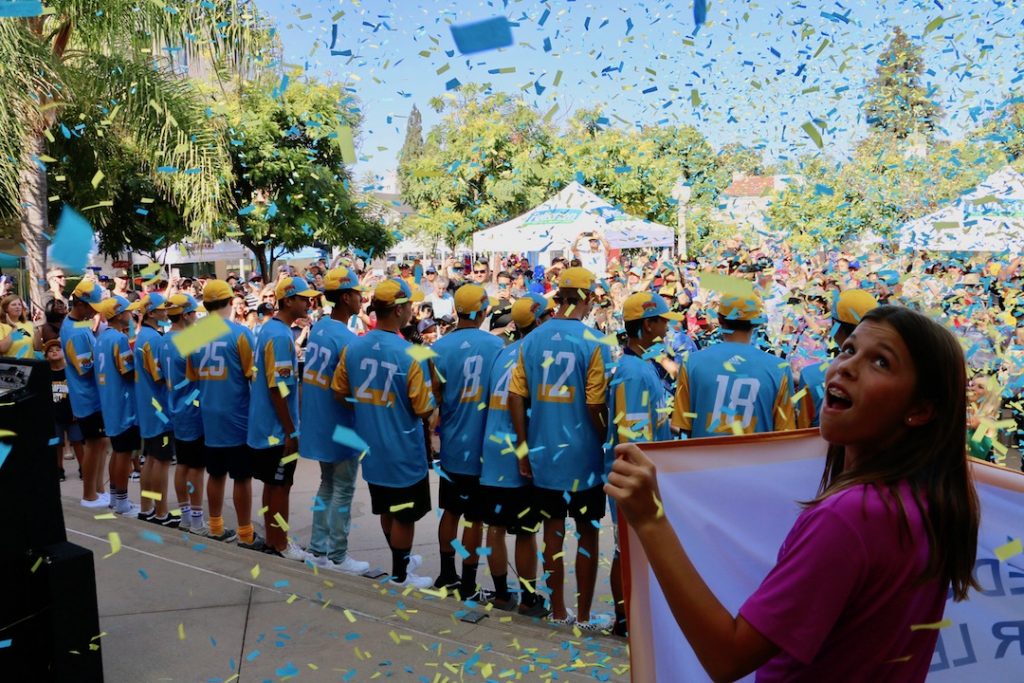 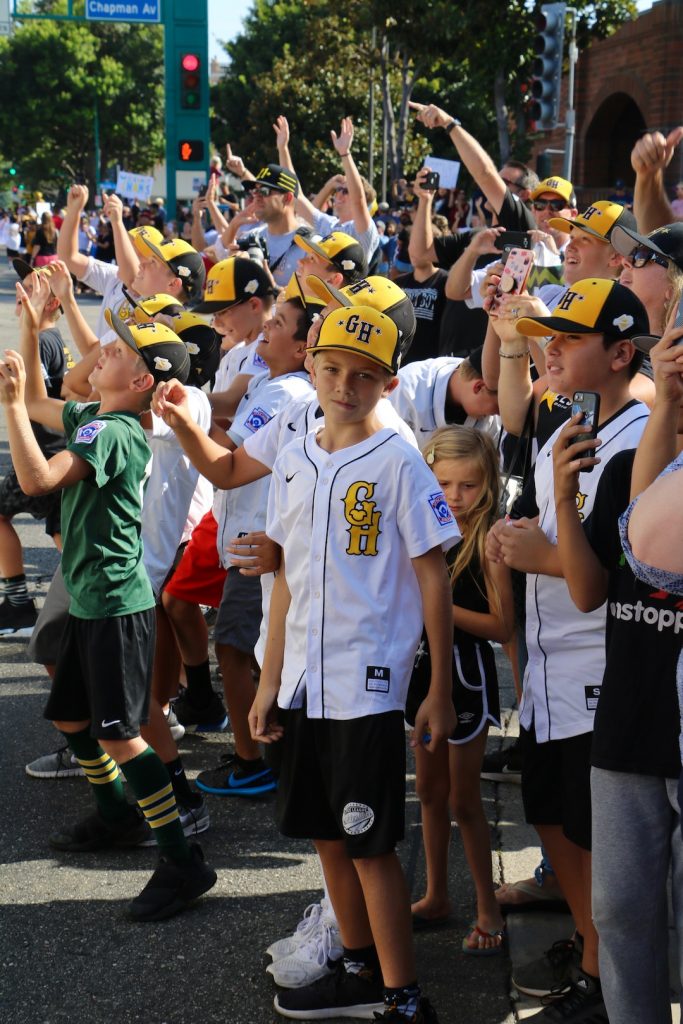 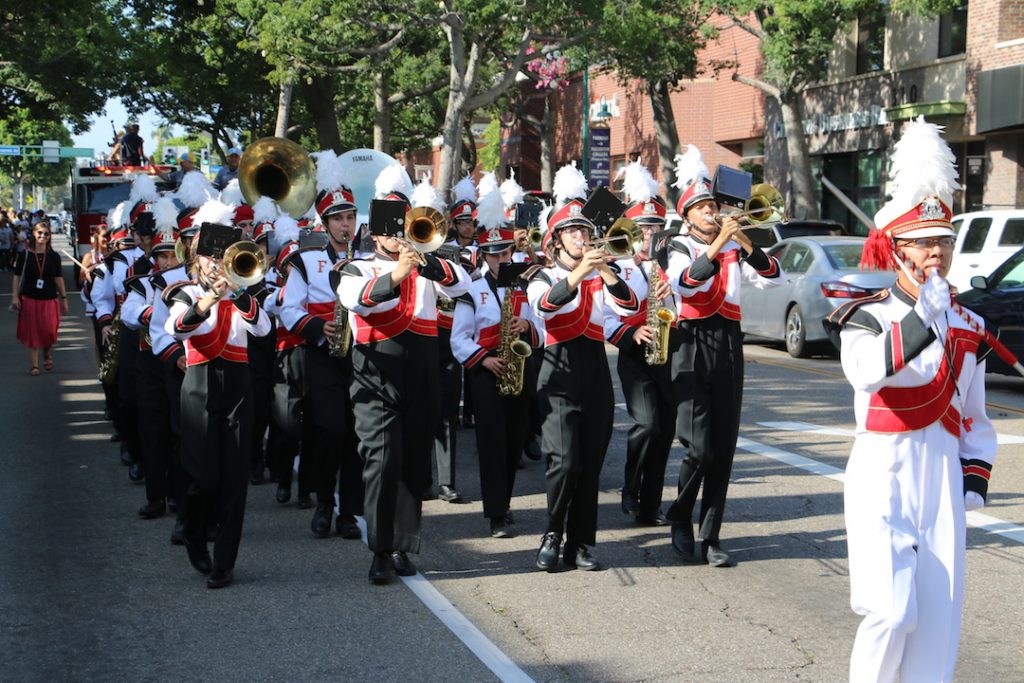 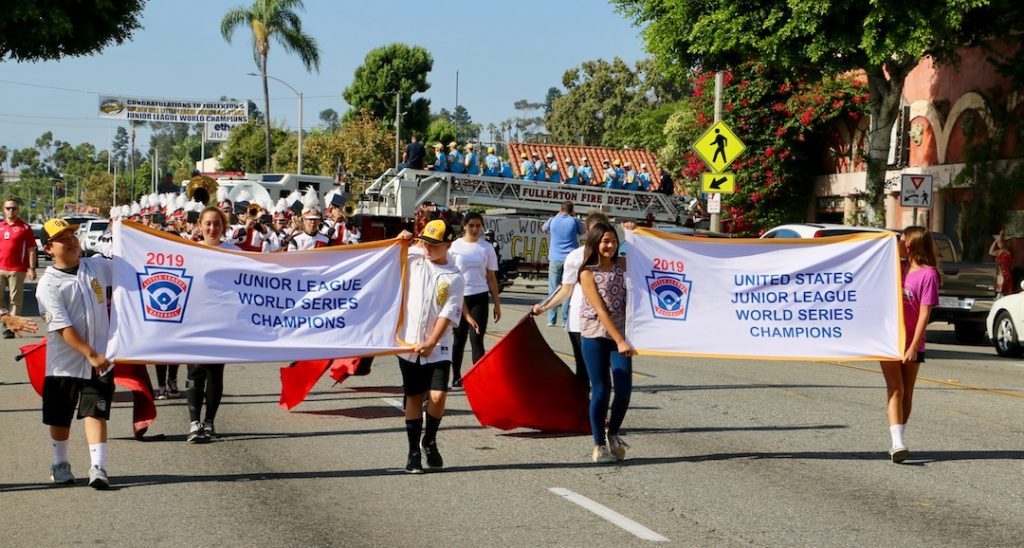