In December of last year, former Mayor of Fullerton, Doug Chaffee, and City Council approved an Exclusive Negotiating Agreement (ENA) between the city and a developer for a hotel on city-own land at the Fullerton Transportation Center. The city has not determined whether the 2.5 acre parking lot on the north side of the train tracks between South Pomona Ave and Terry’s Automotive will be sold to or given to the developer.

As required by the agreement, according to Matt Foulkes, Fullerton’s Community and Economic Development Director, Craig Hostert, CFO of ParkWest Construction, held a Community Meeting on Monday, October 14 at the Fullerton Library. 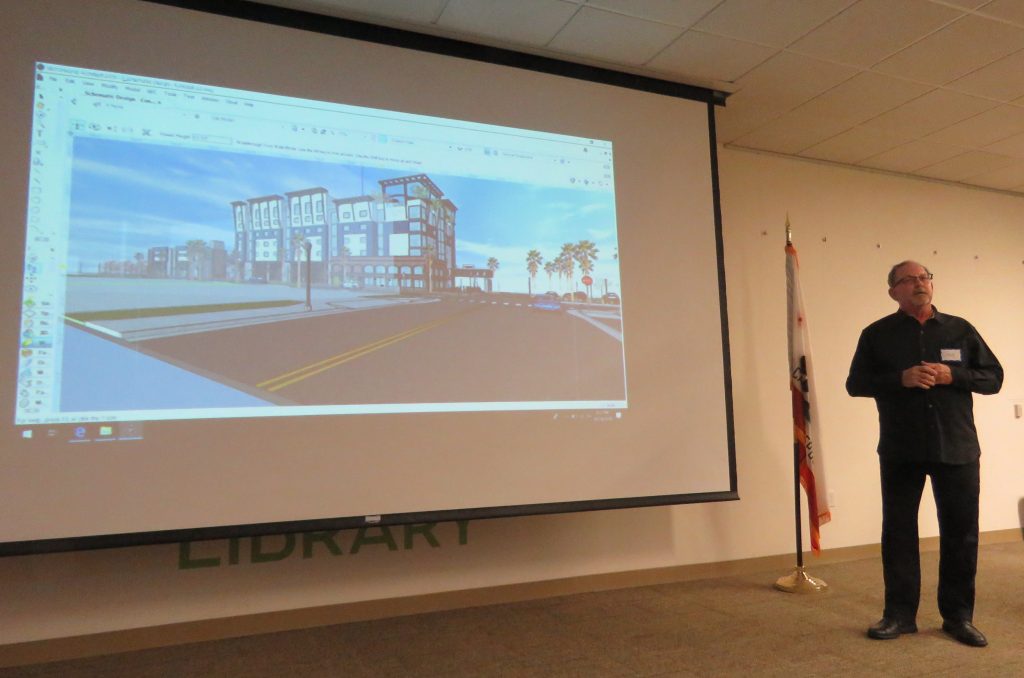 Hostert said the 175 foot, 6-story “1930’s industrial-look” hotel is “in the early planning stages.” The plan includes a ”middle-range” priced restaurant and a roof top bar. He is “in talks” with Hilton Tapestry who would brand, market, and provide booking service for the hotel franchise. “Big brands” like Hilton require about 125 rooms to “make economic sense,” said Hostert. 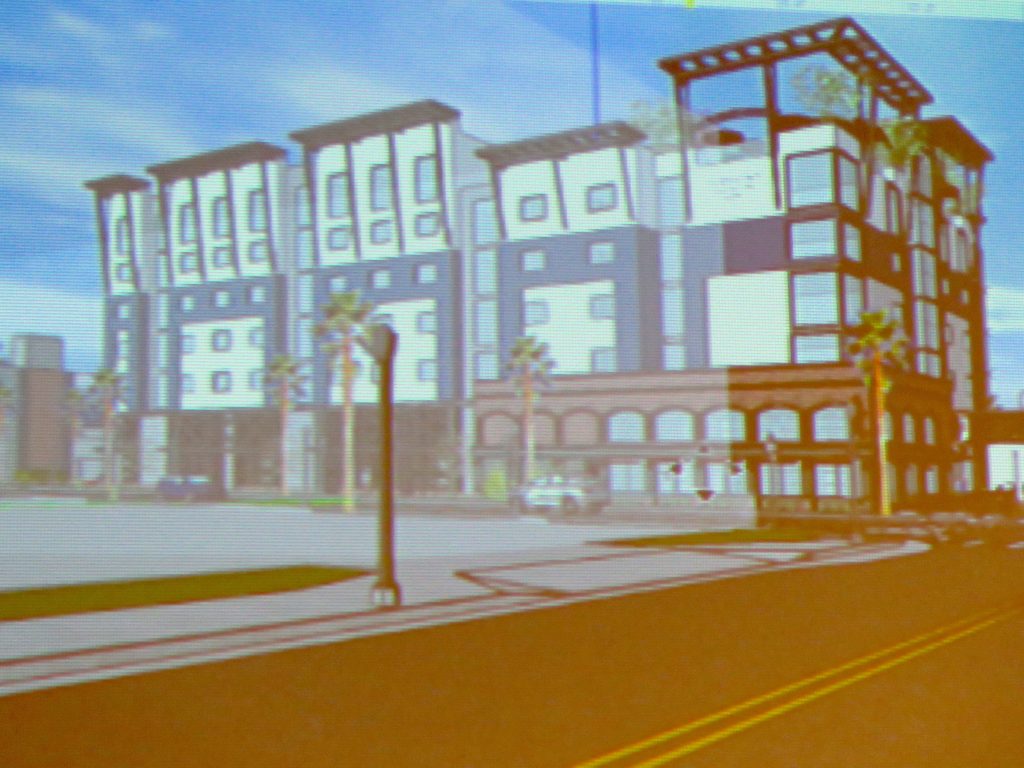 The hotel also includes a three and a half-story, 240 space parking structure, with 127 parking spaces for hotel guests and hotel employees located on the east side of the hotel. The number of hotel parking spaces assumes 70% of the hotel will be occupied.

Hostert said he will also redo the parking lot in front of the train station as a “public benefit.” He plans to move Amtrak buses and other pick up and drop off services closer to the tracks and to add more parking spaces to help him meet the total number of spaces required by the city for the hotel project. 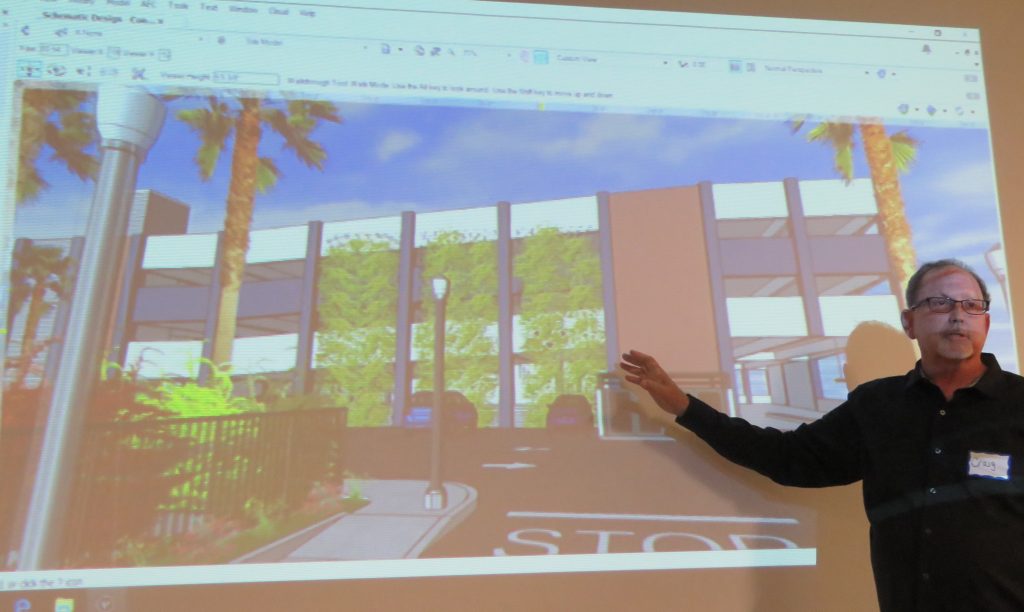 The Southern California Railway Plaza Association (SCRPA), who runs the Fullerton Train Museum (www.fullertontrainmuseum.org) and hosts Rail Road Days in the parking lot where the hotel will be built, supports the project. Hostert said the design “accommodates a new entrance to the train museum.” He showed a drawing of an iron gate on the edge of the parking lot where visitor can access the railcars exhibited on the east side of the depot. SCRPA Board President, Harold Benash, said the hotel meeting room space would “give us an opportunity to have a small convention.”

Hostert will not be making any changes to the historic depot that he says, “Needs a paint job.” Bushala Brothers, Inc. maintain the historic depot where Amtrak provides ticketing, restrooms, and bag check service and manage the loading docks under a log-term agreement with the former Redevelopment Agency. Hostert said the Bushala Brothers plan to open a jazz club for which the hotel plan includes an entrance.

The hotel project would not affect the Spaghetti Factory or its parking lot. It does, however, require relocating the OCTA bus bay on Santa Fe from east of Pomona to west of Pomona, moving it closer to the train station.

Hostert gave a personal reason for locating the hotel at the Fullerton Transportation Center. He said he lives in Fullerton and he thinks, “Fullerton’s Downtown is dilapidated.” He said he wants to improve downtown and complained that JMI Realty had a contract with the city to build but “they did nothing for 12 years.” 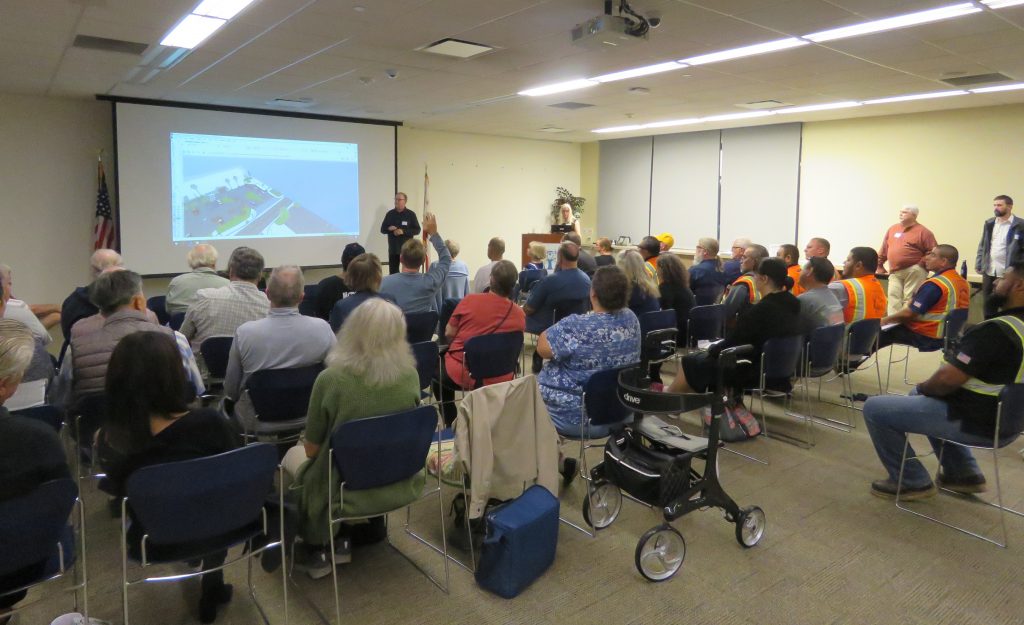 A joint venture called FTC Acquisition, LLC between JMI Realty and The Morgan Group under contract with the former Fullerton Redevelopment Agency created the Fullerton Transportation Center Specific Plan (FTC SP). JMI was given exclusive development rights. The “Purpose and Intent” of the FTC SP as approved by the City Council in 2010 was to “create a sustainable transit-oriented district.”

At the Community Meeting, City Project Manager Heather Allen said the hotel project will leverage the FTC SP and its Environmental Impact Review (EIR) though both will have to be modified to facilitate the hotel.

Despite the hotel project being predicated upon the existing plan that states, “The FTC Specific Plan is designated to achieve certification under (the US Green Building Council’s) Leadership in Energy and Environmental Design,” when asked about carbon offset or solar power for the hotel, Hostert said he had not considered it. Similarly, Hostert responded to questions about possible negative impacts to public transit saying it was OCTA’s responsibility.

Another disconnect between the FTC SP and the hotel project is the requirement from the city architect, according to Hostert, that the hotel be built to replicate a 1930’s Industrial building. The “New Buildings” section of the SP states, “Buildings will be designed with contemporary architectural styles.” Fullerton Heritage Board Member Katie Dalton said the 1930’s design “confused” her, though she did not oppose it.

There was a contingent of Carpenter’s Union Workers at the meeting who said they support the project. They asked for local carpenters to be hired at a living wage. They cited the collapse of the Hard Rock Hotel in New Orleans while under construction as a reason to hire union worker who train in safety and make a goal of everybody going home safe after work each day. Hostert said he mostly did not use union workers, but did not preclude their inclusion. 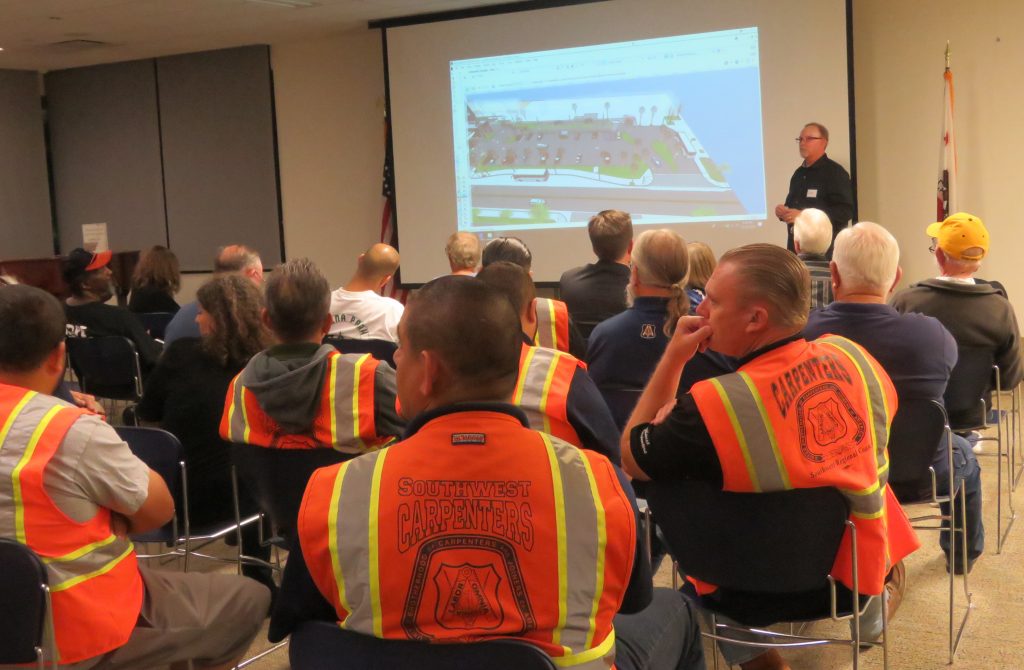 Carpenter’s Union Workers at the meeting said they support the project and asked for local carpenters to be hired at a living wage.

Next year there will be formal Public Hearings at Planning Commission and City Council to potentially recommend and approve, respectively, the environmental analysis and design of WestPark Investment hotel. In the interim, the disposition of the land should come before the city council.