Fullerton claimed its second state championship in program history with the first coming in 2014. Both championship teams were led by head coach Gabriel Martinez, who now has 297 career wins (.756 winning percentage).

The Hornets did not waste any time in the first quarter taking a 2-1 edge frustrating the Tigers with goals by Alexandra Lopez and Bryanna Santis.

The second quarter was a scoreless defensive struggle as both squads battled for position and momentum.

Fullerton took over in the third quarter scoring 4 unanswered goals taking a large 5-1 lead to start the fourth. Goals were had by Briana Portales, Kelly Doherty, Santis, and Lopez.

Momentum was clearly on FC’s side, until the game took a hard turn the other way as Riverside showed why they were one of the top teams in the state. The Tigers went on a feeding frenzy scoring a shocking 5 goals in four minutes to tie the game up at 6-6. Three of those goals were scored by Isabelle Ritter. The other two were scored by Maria Holden and Jesenia Wilson.

With less than a minute left in regulation, two-time Orange Empire Conference MVP Bryanna Santis punched in the game winning goal. The Hornets got the ball back with 20 seconds left and let Santis swim out the clock keeping the ball out Tiger hands.

Ranked No. 1 in the state throughout most of the season, Fullerton ended the season with an impressive 32-3 record, winning their last 9 games to seal the title. After losing to Riverside in the very first meeting of the season, FC rattled off 5 straight wins over the Tigers winning the season series 5-1. 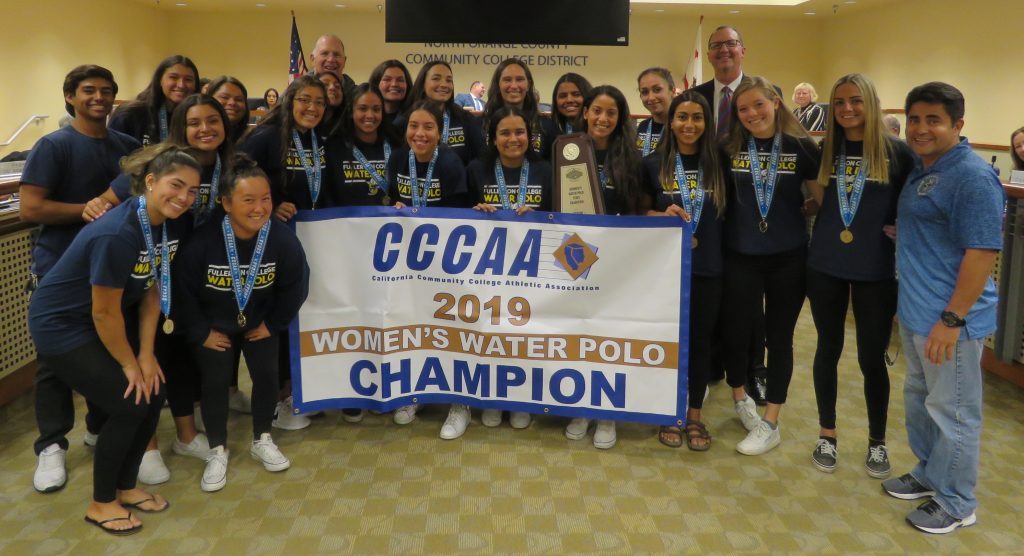 Members of the champion Fullerton College Water Polo Team were honored at the Nov. 26 NOCCCD Board of Trustees meeting.