Hundreds of residents, many from the faith community, showed up at the January 21 Fullerton City Council meeting to urge council to approve a recuperative care/navigation center for the homeless, and council voted 4-1 (Whitaker “no”) to approve it.

An hour before the meeting, homeless advocates assembled outside City Hall, and marched around the building to express their support for the project. Here are some photos from that demonstration: 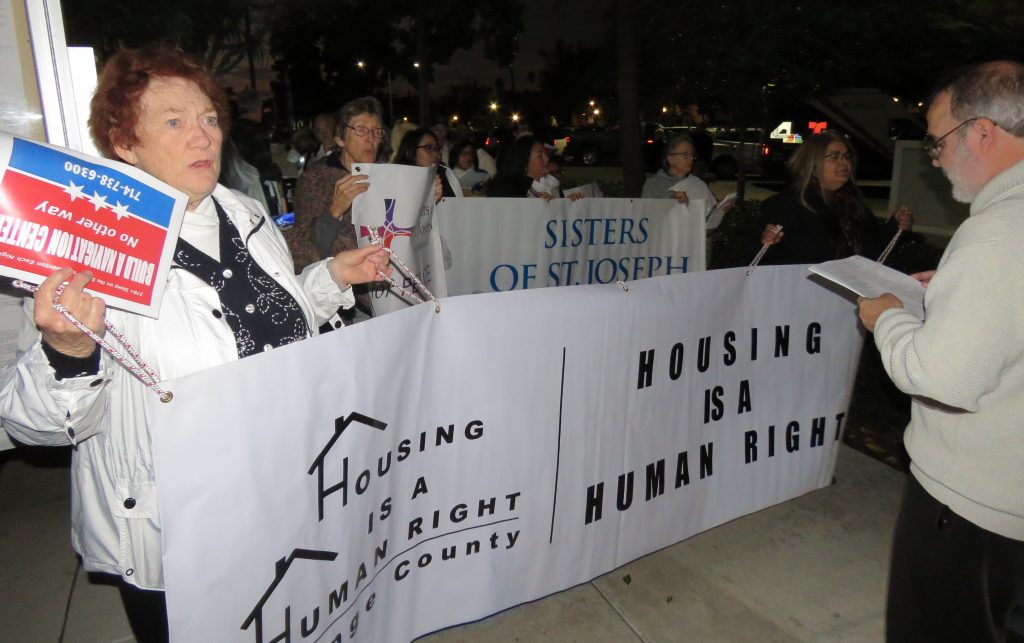 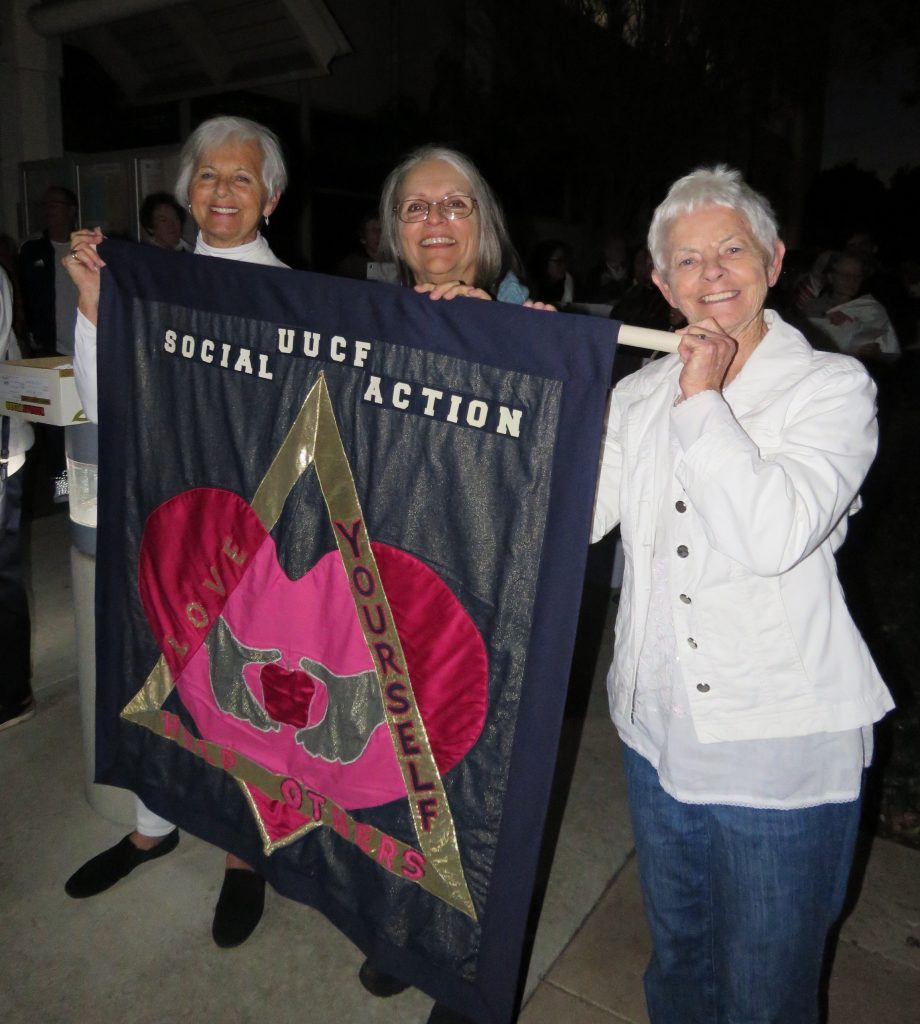 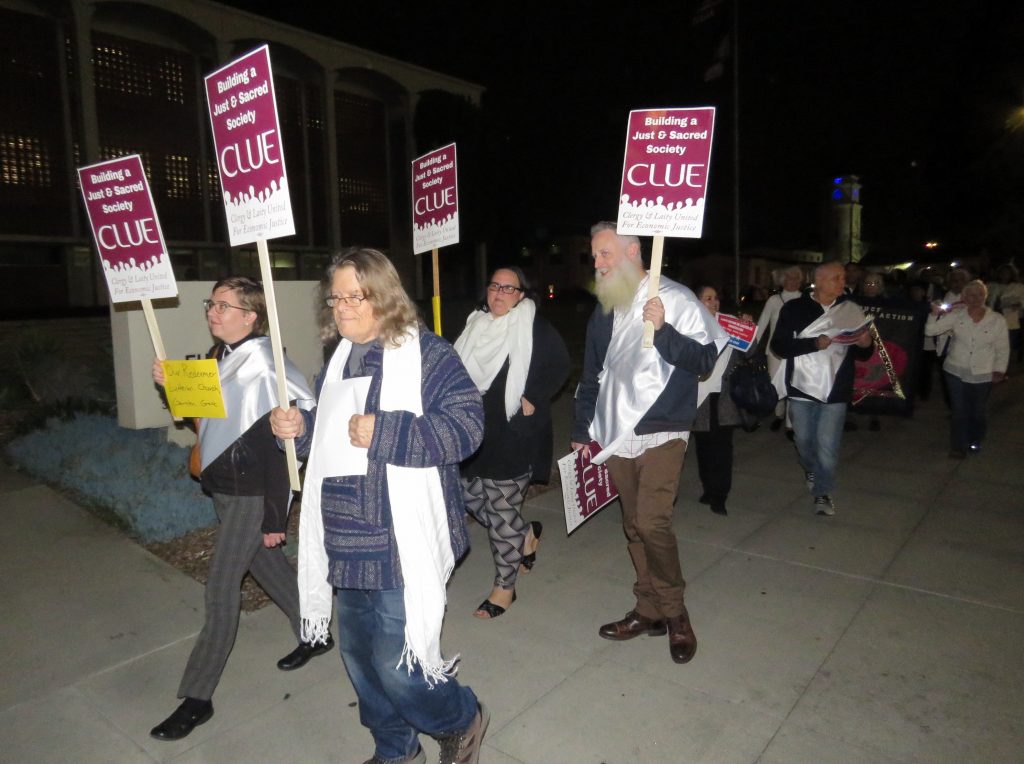 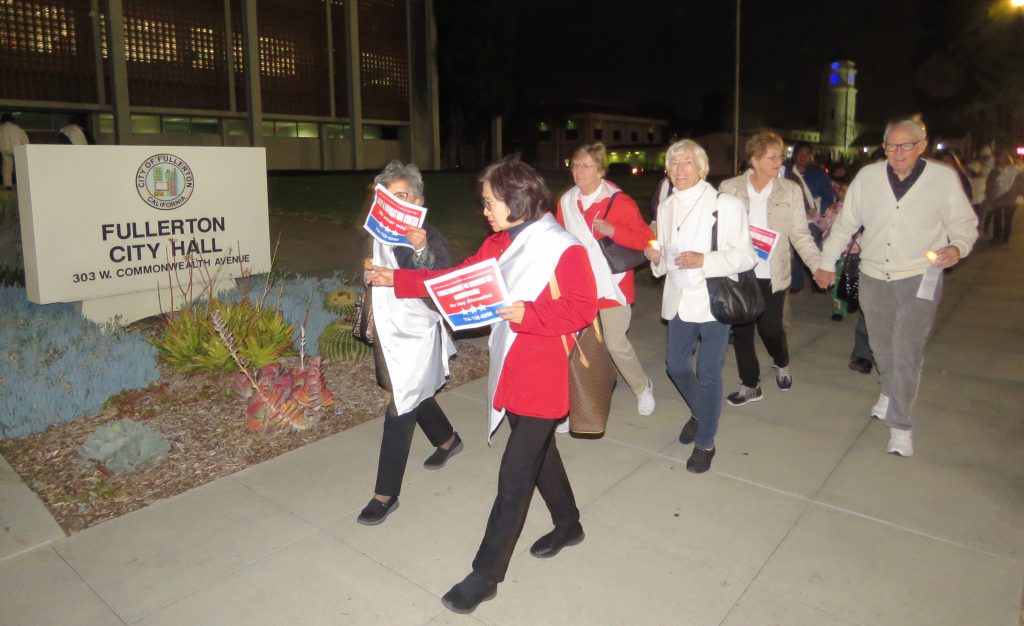 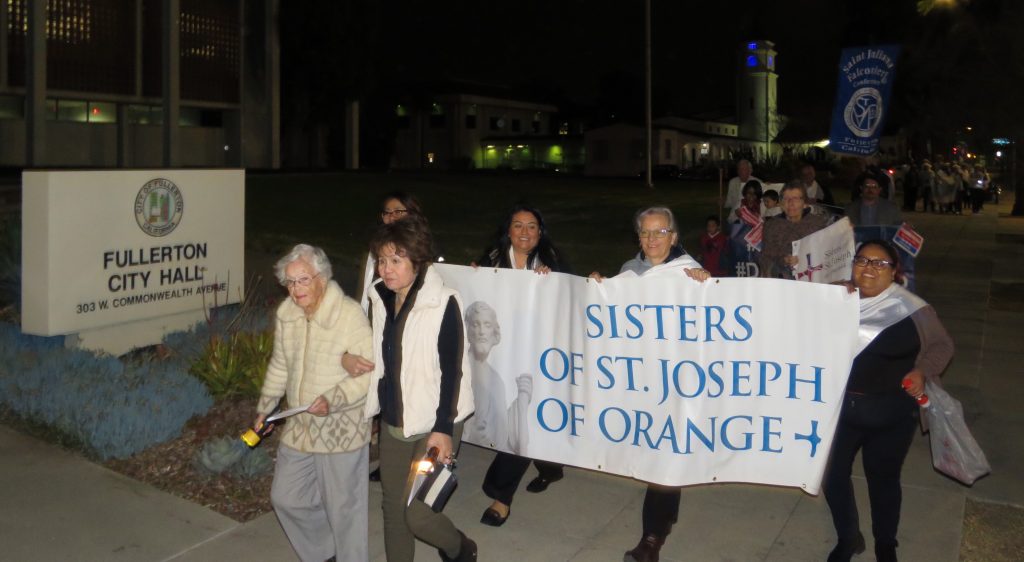 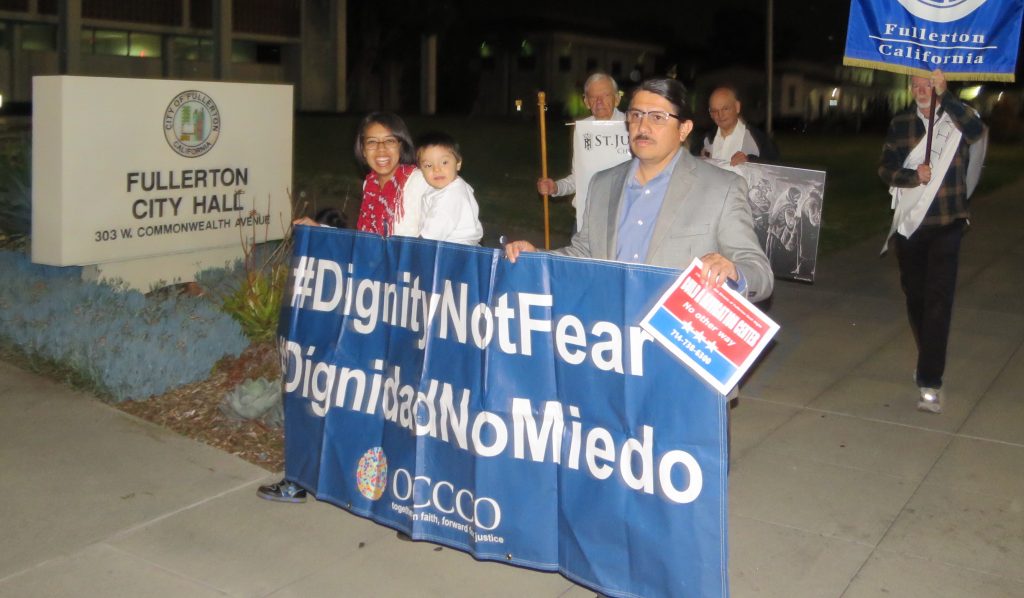 In December, the Planning Commission approved a permit for the project, which will be run by local nonprofit Illumination Foundation, including 60 beds of recuperative care and 90 beds of navigation center with wrap-around services in a currently-existing industrial building at 3535 West Commonwealth Avenue.

The vote of the Planning Commission was appealed by an adjacent property owner, and council voted to deny the appeal, with some added conditions.

Many members of the public, including many homeless advocates, spoke in favor of the project. 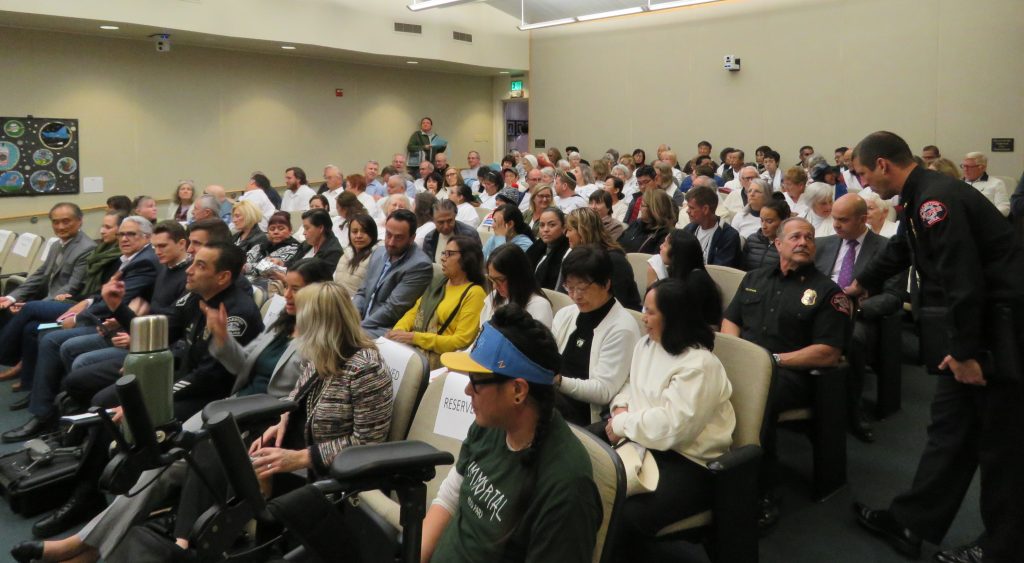 Council chambers were full to overflowing with supporters of the project.

Rusty Kennedy, chair of Fullerton’s Homeless Planning committee, thanked the city for declaring a “homeless crisis” last summer, opening the “safe parking” program (for those living in their vehicles), establishing the homeless planning committee, and supporting the Illumination Foundation in their efforts to establish this facility.

Diane Vena said there are 24 reasons to approve this facility, and proceeded to read the names of the 24 people who died homeless in Orange County in December. 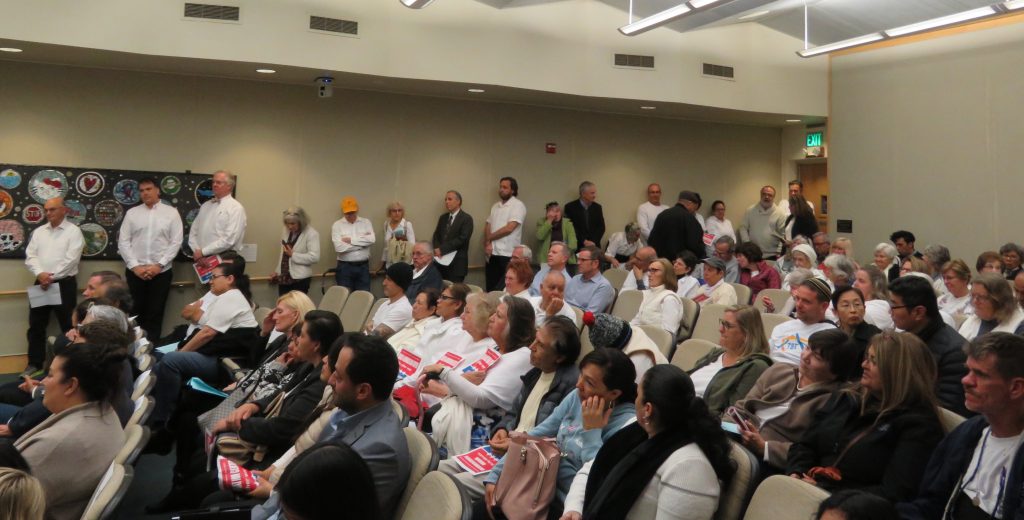 Members of the public line up to address council.

Barry Ross from St. Jude Medical Center, spoke of the importance of the recuperative care facility, which provides shelter and care for homeless people who are released from the hospital, so they are not sent back on the streets.

“I’m here on behalf of the more than 500 unique homeless patients that St. Jude serves every year to ask for your support of this recuperative care center,” Ross said. “The patients we see are often frail, elderly, and have multiple chronic conditions.” 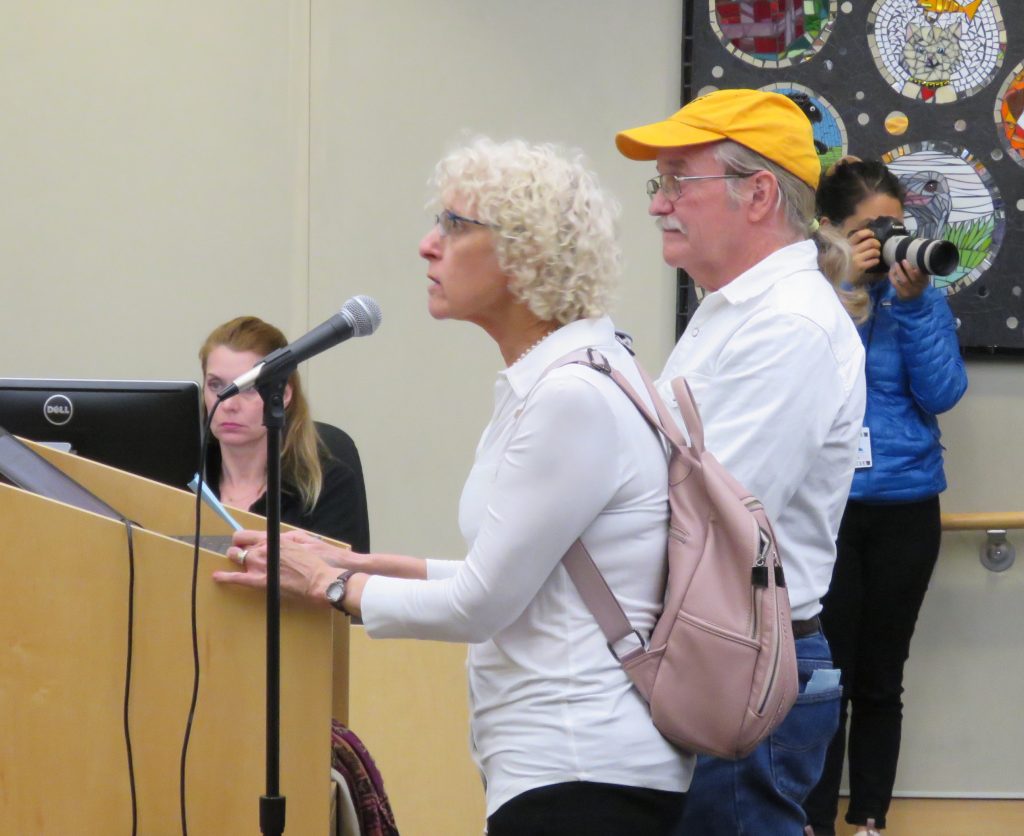 Debbie Langenbacher, accompanied by her husband Harry, urges council to approve the project.

Miguel Lopez, a local social worker, said that this last year, over 50 percent of people experiencing homelessness were over 50.

“It’s really about making sure people aren’t dying on the streets,” Lopez said.

Councilmember Jesus Silva, who supported the project said that people often say, ‘We want to help the homeless, but can you do it over there?’

“This is a place for us to start. We have to move forward with this. We can’t say, ‘There’s a better place over there, in the next city.’ We have to provide some leadership,” Silva said. 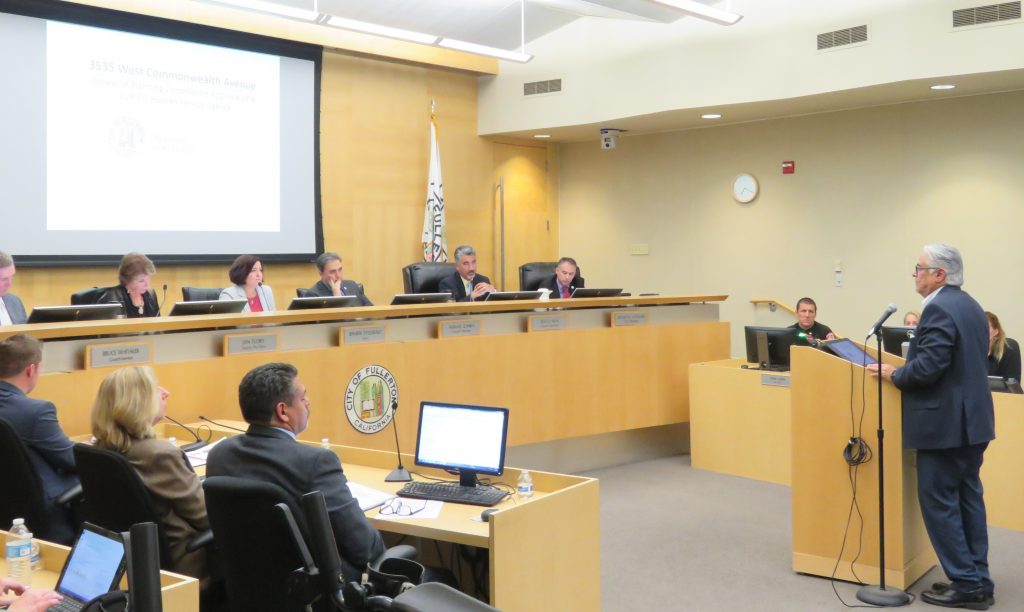 Councilmember Ahmad Zahra said, “The question is, ‘Do we want our homeless neighbors getting help or dying on the street?’ That’s the question…I want to applaud the neighbors who came out in support of this, who have said not the usual ‘Not in my Backyard” but instead ‘Yes in my backyard.’”

Councilmember Bruce Whitaker voted against the project, expressing concern over a lack of transparency and community outreach regarding the project.

Mayor Protem Flory, who supported the project, explained that it was in part because of council’s approval of this project that the city was able to clear the Gilbert homeless encampment.

“In 2013 we were not successful in approving a 200-bed homeless facility on State College, and the reason was we did not have community support,” Flory said. “Because of your support, your help, your stories, your advocacy, you have made our decision very easy tonight and I thank you for that.”

Mayor Fitzgerald, who supported the project, said she respects the adjacent property owners’ concerns and believes the added conditions will alleviate those concerns.

“I think a healthy community is one that provides a place for everyone to be a part of their community,” Fitzgerald said. “There are people in our community who need a second chance.” 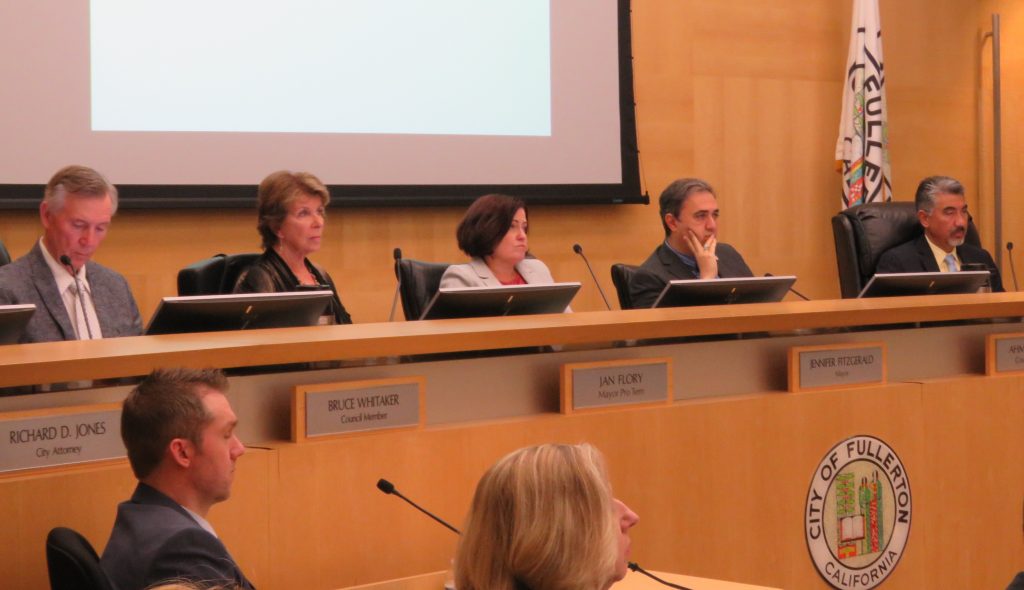 Fitzgerald also proposed creating a community advisory board that meets twice a year with the surrounding community, “to collaborate and be a good neighbor.”

Last October council approved a cooperative funding agreement with the Illumination Foundation of $500,000 for improvements to the building for this project.

The facility will provide 24-hour staffing and security personnel on three shifts.

The facility will not allow walk-up clients to enter. People will only be allowed to enter if they have been referred by a service provider.

One condition of approval involves ongoing outreach and engagement with the adjacent businesses, property owners, tenants and residents within the area on a recurring basis to allow a forum for feedback on the operations and management of the facility and steps that can be taken by Illumination Foundation to address those concerns.

The facility is expected to open this year.