Although not receiving an Academy Award nomination for Best Picture, the richly deserving “The Two Popes” did get two nominations in the Best Actor and Best Supporting Actor categories with Jonathan Pryce playing the current Pope Francis and Anthony Hopkins his predecessor, Pope Benedict.   Most of us remember the startling resignation of the Papal leader in 2013, when for the first time in 700 years, a second Pope replaced a still-living pontiff in Vatican City. Even with this inevitable conclusion, screenwriter Anthony McCarten (“Bohemian Rhapsody”), through expert dialogue and pacing, maintains suspense and a compelling interest in how it all came about. 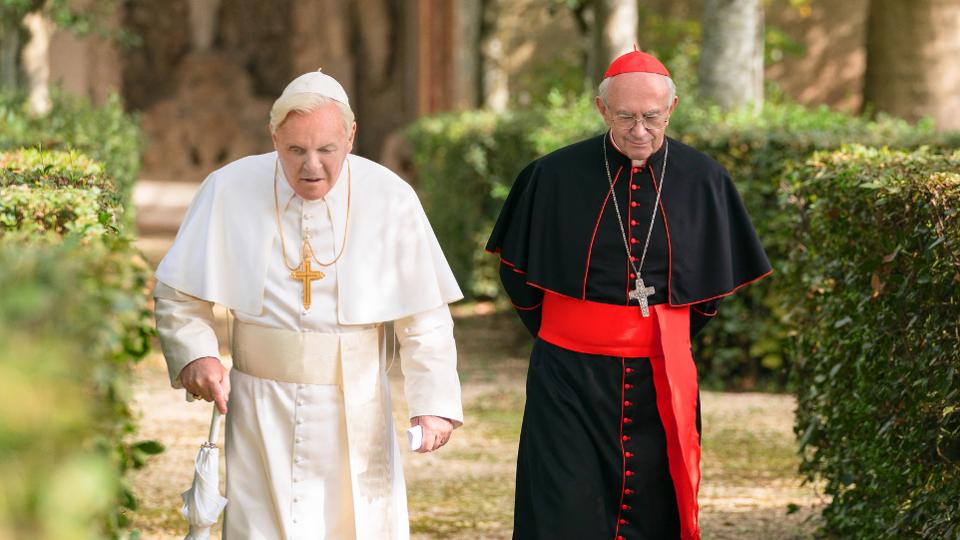 The movie begins in 2005 after the death of Pope John Paul II.  Cardinals from around the world gather in Rome to vote for his successor. The first voting is far from decisive and results in the black smoke curling above the Vatican. Some of the Cardinals want a more  forward-thinking Pope who will address the crises facing the Church, especially the much publicized sexual abuse scandals. Others feel that a more traditional Pontiff is needed to maintain the dignity of the Church as it moves into the twenty-first century. Ultimately the choice comes down to voting for the more liberal Argentinian Cardinal Jorge Bergoglio  or the more conservative German Cardinal Joseph Ratzinger. The German wins even as some in the cheering crowds below mutter “the Nazi.”

Cardinal Jorge Bergoglio  returns to Buenos Aries, where he likes to dress as simply as possible as he moves among his people. We do get flashbacks to his life as a young man (played by Juan Minujin) when he danced the tango and was once in love with a young woman before joining the Jesuit priesthood. Laboring among the working class and the poor for the next seven years, a worn and discouraged Bergoglio writes a letter of resignation to Pope Benedict, asking to retire from his duties as Cardinal.

The answer he receives insists that he come to the Vatican to meet with Pope Benedict. Upon landing in Rome, he is airlifted to the Pope’s summer residence, Castel Gandolff, with elegant gardens and a view of the sea. Here the Pope does not want to talk about the resignation letter and prefers spending time talking with Bergoglio about history, music, art, the Church, and Bergoglio’s favorite topic–soccer. Even after the two men return to Rome, Pope Benedict avoids discussing Bergoglio’s letter and prefers to show his guest the beauties of the Vatican, especially the Sistine Chapel, while the Cardinal explains the intricacies of soccer to the Pope. Two clerics could not be more different, yet each is beginning to enjoy the other’s company.

When Benedict at last confides to Bergoglio that he has brought him to Rome because he wants to retire from the Papacy, and he feels that Catholics around the world would be better served by a man like Bergoglio, whose humanity and ease with people from all cultures  and backgrounds will bring to the world-wide Church an understanding of the problems and challenges that seem remote to Benedict.

Feeling unworthy on many levels, Bergoglio  confesses to Benedict his own shortcomings, especially the guilt he has carried with him for not interceding on the part of two of his priests as they tried to help the dissidents during  Argentina’s “Dirty War” in  the 1970s. But we all know that Bergoglio eventually relents and becomes the current Pope Francis.

Not only does McCarten write insightful and witty dialogue between these two clerics, but director Fernando Meirelles (“City of God,” “The Constant Gardener”) intersperses their conversations with illuminating flashbacks that take us through the unlikely journey that brought to the Vatican the first Pope from the Western Hemisphere.