A little over five miles from downtown Fullerton, straight up Harbor Boulevard and a mile-and-a-half down Fullerton Road in La Habra Heights is the Powder Canyon Trailhead, a loop which offers a spectacular view of the surrounding hills and canyons. The three-mile trail takes visitors through a beautiful woodland area, up a hill covered in wildflowers and into a canyon cutting through the Puente Hills before circling back around. Now that spring has arrived, this is the perfect time to visit since the grassland here is very picturesque. 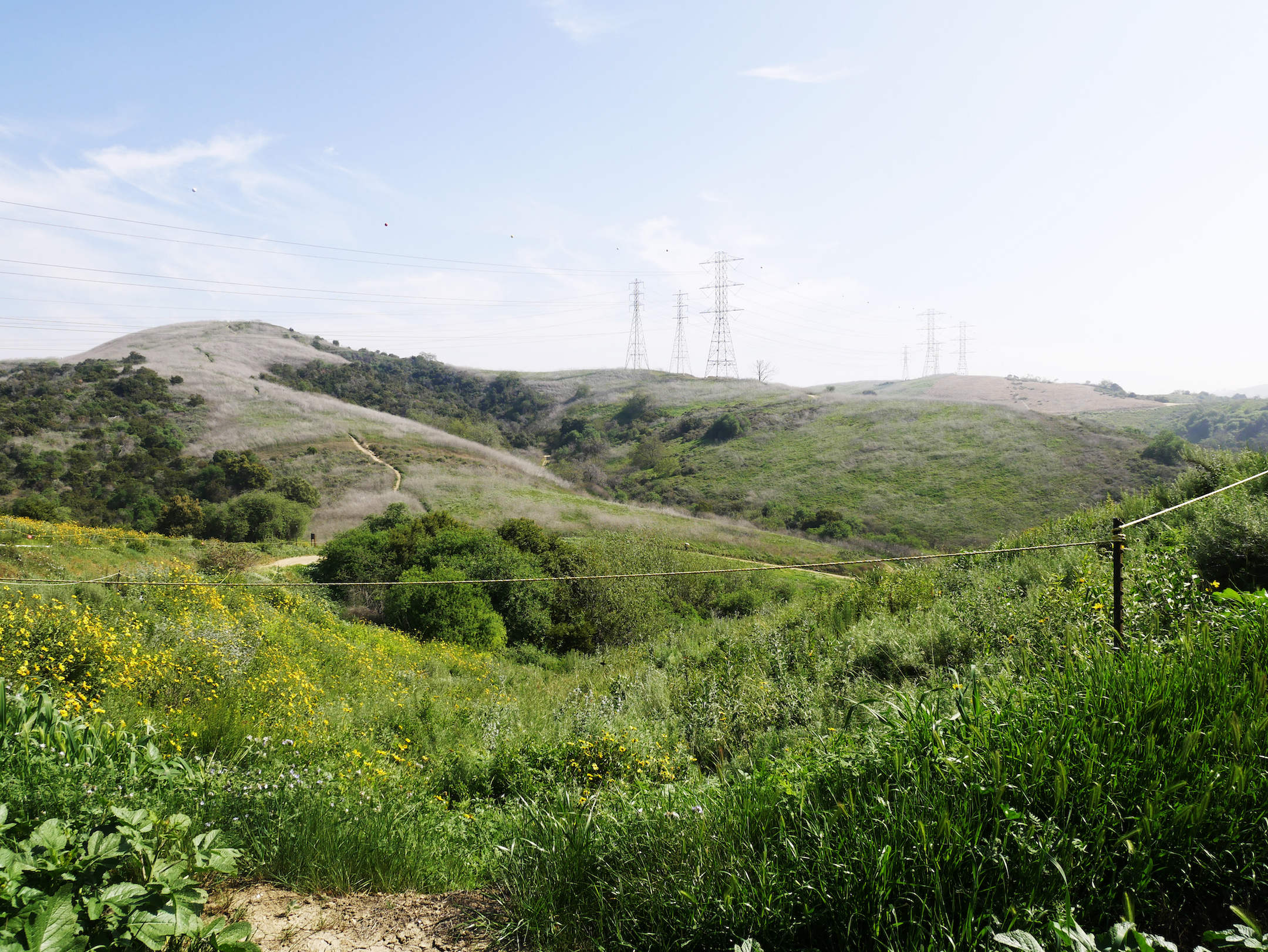 Lying partially in the Puente Hills Habitat Preservation Authority lands and partially in LA County’s Peter F. Schabarum Regional Park, the loop through Powder Canyon is more popular with equestrians than hikers and bikers since there are centers and corrals at either end of the canyon. Rumor has it that the Powder Canyon route may have been part of an old network of native Indian trails through the hills that connected the San Gabriel Valley with the coastal plains of modern Orange County. Supposedly, the Portola Expedition of 1769, the first European excursion through California, used the canyon to get from a campsite near modern-day Fullerton to the valley that was then christened San Miguel. But this may not be entirely true, since this doesn’t appear to conform with the detailed descriptions of crossing over the hills according to the field journal of Father Juan Crespi. However, there were other people who certainly did use the Powder Canyon route over the hills from Fullerton into the La Puente area, especially as the old Anaheim-Puente Road (a bit of which still survives in the City of Industry) came up from Fullerton and wound through the hills.

Over a century ago, Powder Canyon acquired its name from a new explosive powder invented to compete with dynamite and other explosives, called Satanite. In 1908, the Union Powder Company began testing a product invented by J.G. Hulme of Los Angeles in connection with Professor G.E. Bailey, a chemist. They claimed that their product would use less powder, produce less smoke and create explosions more evenly from the blasting point. 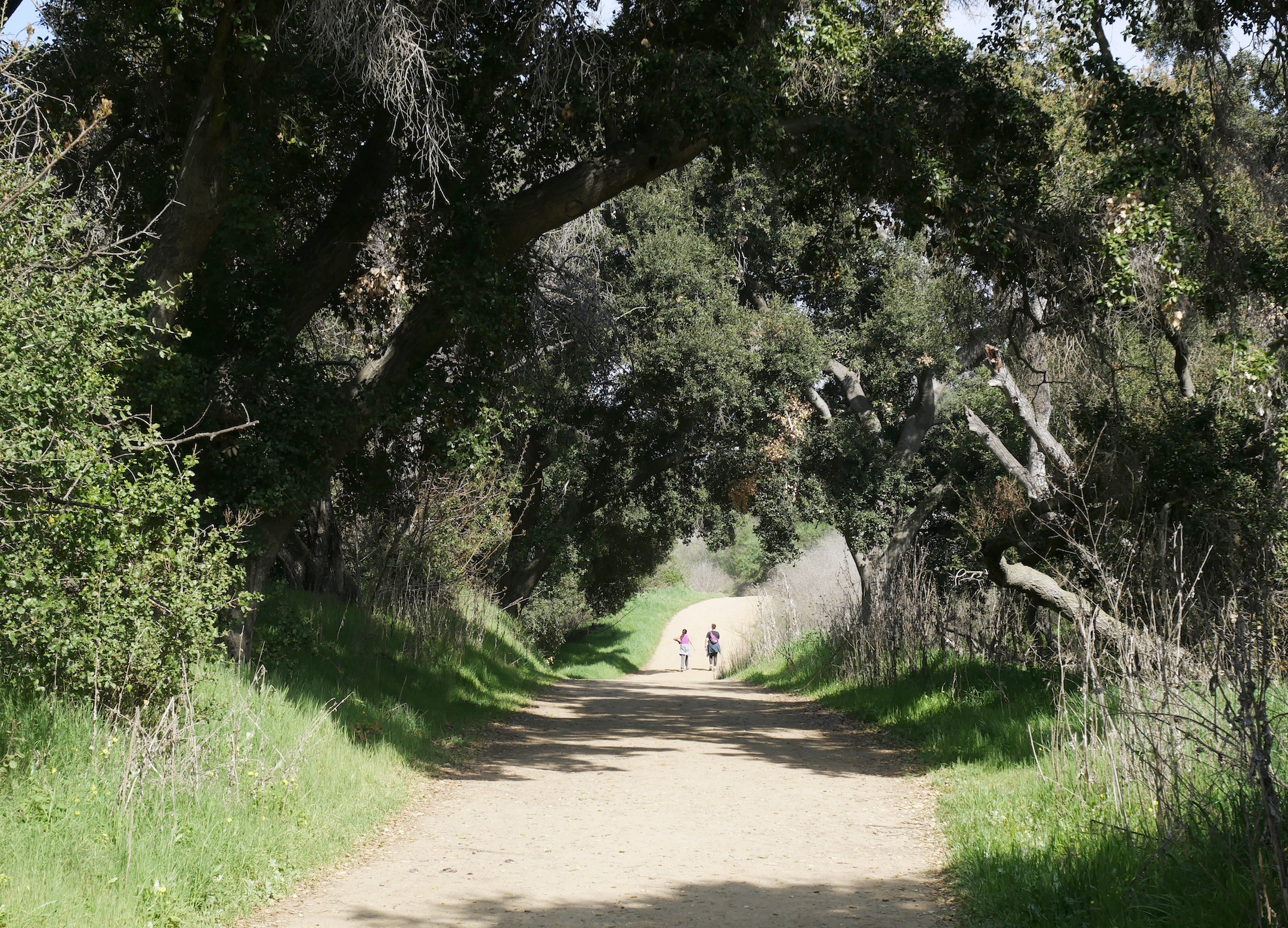 As is often the case with new companies trying to get an original product on the market, the Satanite firm seems to have exhausted its resources without being able to secure a foothold in the explosives industry, which was going through a major revolution due to advances made in Germany during the period, just as World War I was dawning. Still, the name stuck, and that’s why the area is called Powder Canyon. In fact, according to several old newspaper descriptions, the plant may have originally been located around the area where the equestrian facilities are now and extended to the Fullerton Road trailhead.

I found out about this trail from my dad who happened to spot it online when searching for trails in the North Orange County area, so I decided to check it out. Driving down Harbor Boulevard into the hills, I turned left on Fullerton Road and stayed on it for quite some time until the neighborhoods around me turned into a wilderness area. There were two dirt roads leading off of the main roadway. Continuing down Fullerton Rd., I noticed that some people had parked along pull-out areas, but I kept going, and ended up turning down the second dirt road which was marked by a large green sign that read, “Habitat Authority Puente Hills Preserve – Powder Canyon Trailhead.” According to the sign, the preserve was closed from sunset to sunrise and during adverse conditions, including extreme fire danger, and for 48 hours after rain. 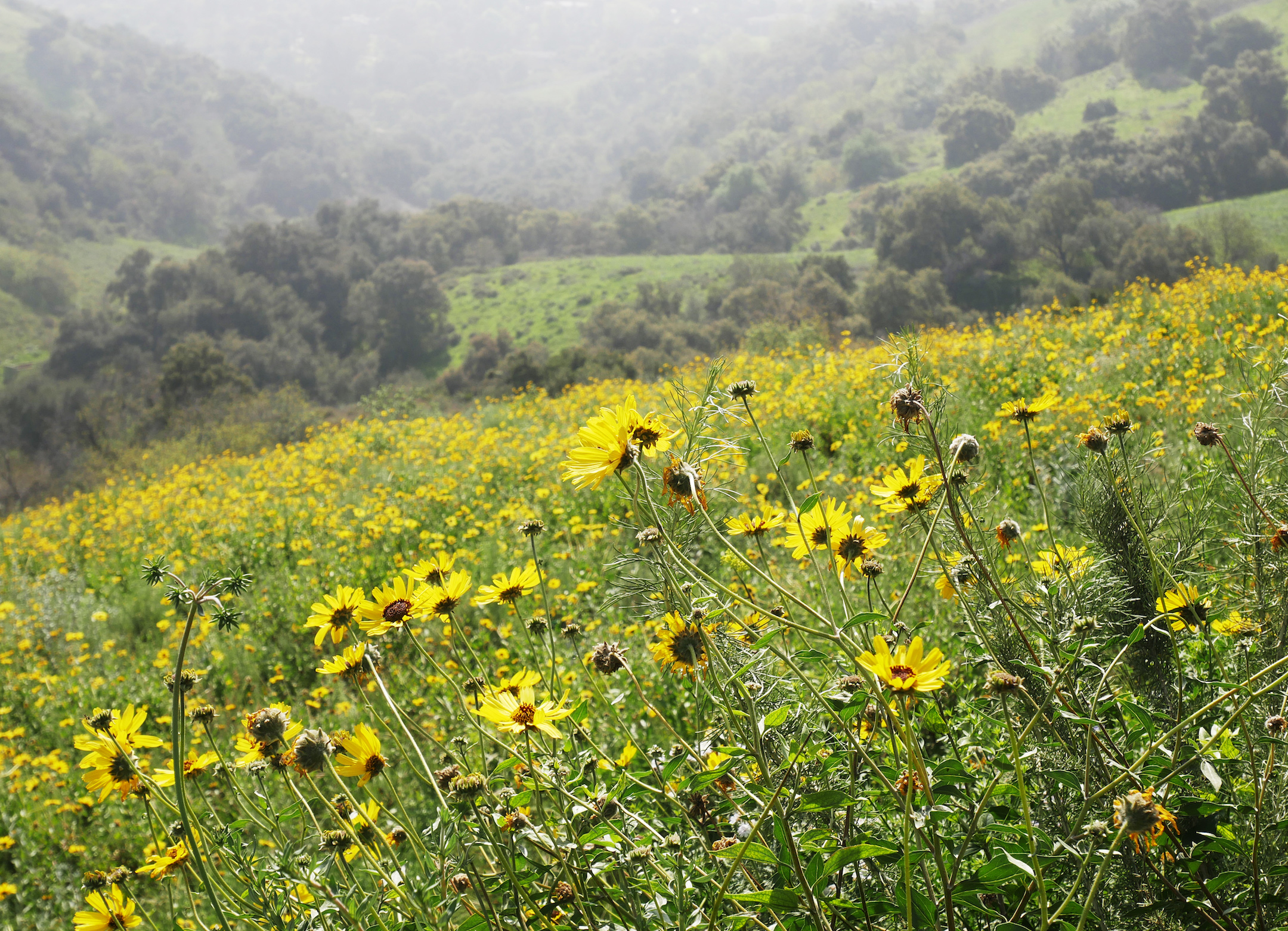 The dirt road led me through a grove of trees and eventually ended up in a large dirt parking lot next to an equestrian area and a couple of portable bathrooms. Walking around a white fence, I came across a sign telling visitors what to do in case a mountain lion or a bobcat is spotted. The difference between the two is that the mountain lion has a long tail, while the bobcat has a short tail. Bobcats don’t pose a threat to humans because they’re shy and only a little bigger than a housecat, while attacks upon humans by mountain lions are extremely rare since they prefer to hunt for deer in the preserve and are not commonly seen.

The trail began on a gravel fire road just to the north of the equestrian ring. The gravel didn’t last past the ring and the trail became a fairly even dirt pathway. I heard a dog barking in the distance, which reminded me of my encounter with a pit-bull from last spring. In fact, it’s important to keep your dog on a leash and under control at all times on trails that allow for dogs. Dogs running off leash may result in adverse impacts on wildlife and degrade the outdoor experience of other trail users.

After an amount of time spent in the mid-morning sun, I found myself stepping through a small shaded collection of California Live Oaks, which added a lovely canopy overhead. If visitors happen to be hiking on a bright sunny day, this is the area where they will really be able to cool down. In this area, I spotted yellow wildflowers and purple Lupine sprouting up on the sides of the path. At about 0.35 miles, I found myself at a junction. The Gray Squirrel Trail continued above the pathway I had previously been following. I went a little ways on that trail, but stopped after I heard some rustling from a big animal in the bushes. I turned back around and continued on the main Powder Canyon Trail, which turned north. 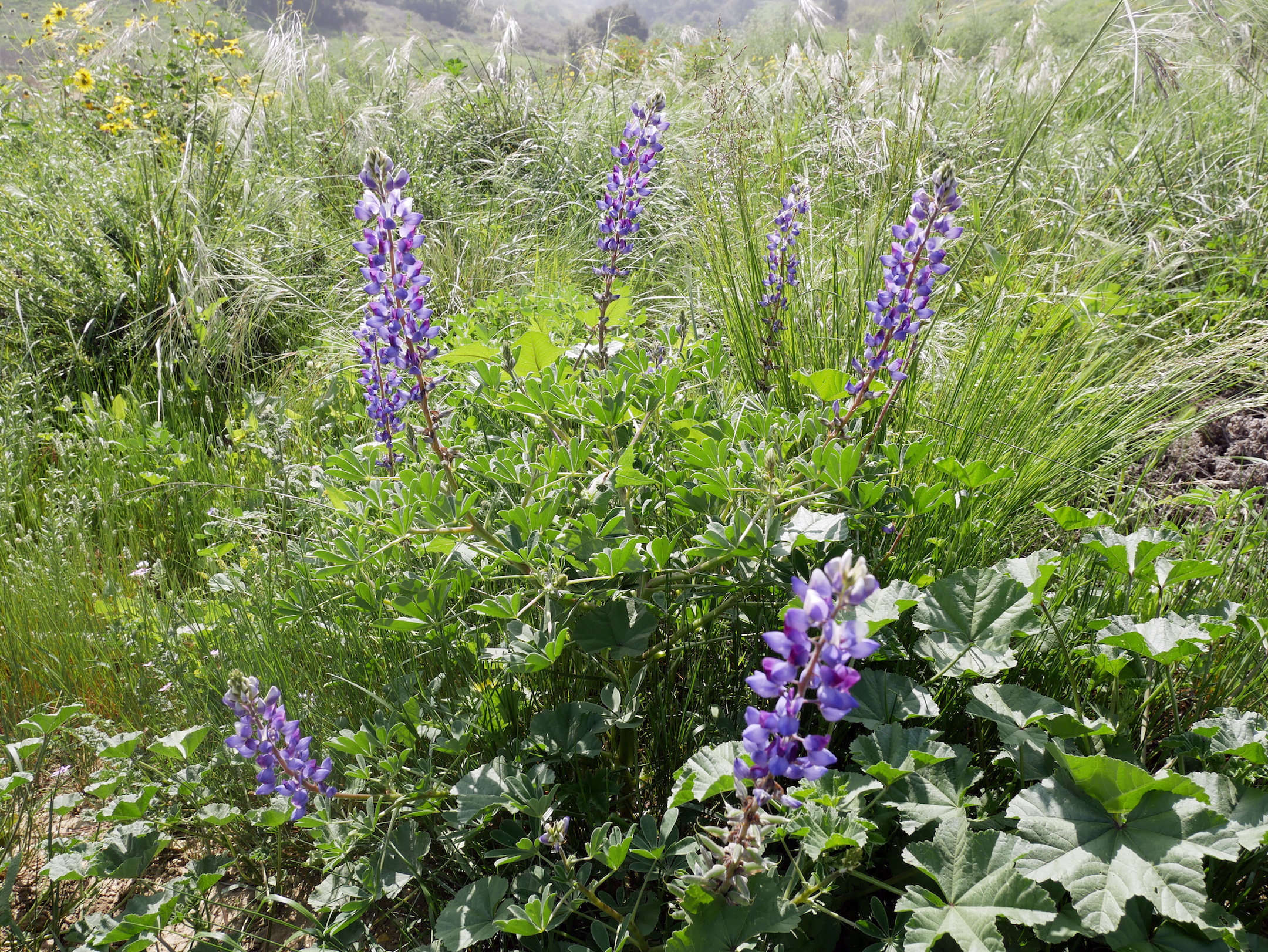 By this point in the trail, the shaded woodland was limited to one side of the path instead of providing a pleasant archway of shade. Gradually, the forest began to fall behind me and by the time I reached a junction with a sign marking the Black Walnut Trail, I found myself under the sun again. I continued straight on the Powder Canyon Trail and encountered some hikers and a bicyclist. I stopped to admire the sounds around me, listening to the chirping of the birds mixed with the buzzing of electricity coming from the power lines overhead. Eventually these sounds were drowned out by the loud noise of an airplane passing by. In fact, the trail happened to fall under a flight path, so planes were coming and going quite often.

As I climbed to the top of a very short hill, I could see a larger hillside in the distance covered by yellow wildflowers. It was there that I reached a three way junction with no signage marking the way. I turned left and followed the Purple Sage Trail, a fire road which led up to the hill with the flowers. From there, I saw a grand view looking out at the surrounding hills. As I hiked higher and higher, I could look down on the trail that I had been walking on. Up until that point, I didn’t realize how far I had really walked. Most of the wildflowers were behind a yellow rope with a red sign that read, “Native Habitat Restoration Area – Keep Out.” However, at a curve in the path, I was able to get a better view of all the flowers blossoming in the green grass. I spotted what looked like a California poppy next to another Lupine. By that time, it was getting closer to noon and the sun was directly overhead, making everything warmer. I took a long drink from the water bottle I had brought along with me. Please make sure to stay hydrated along this trail. 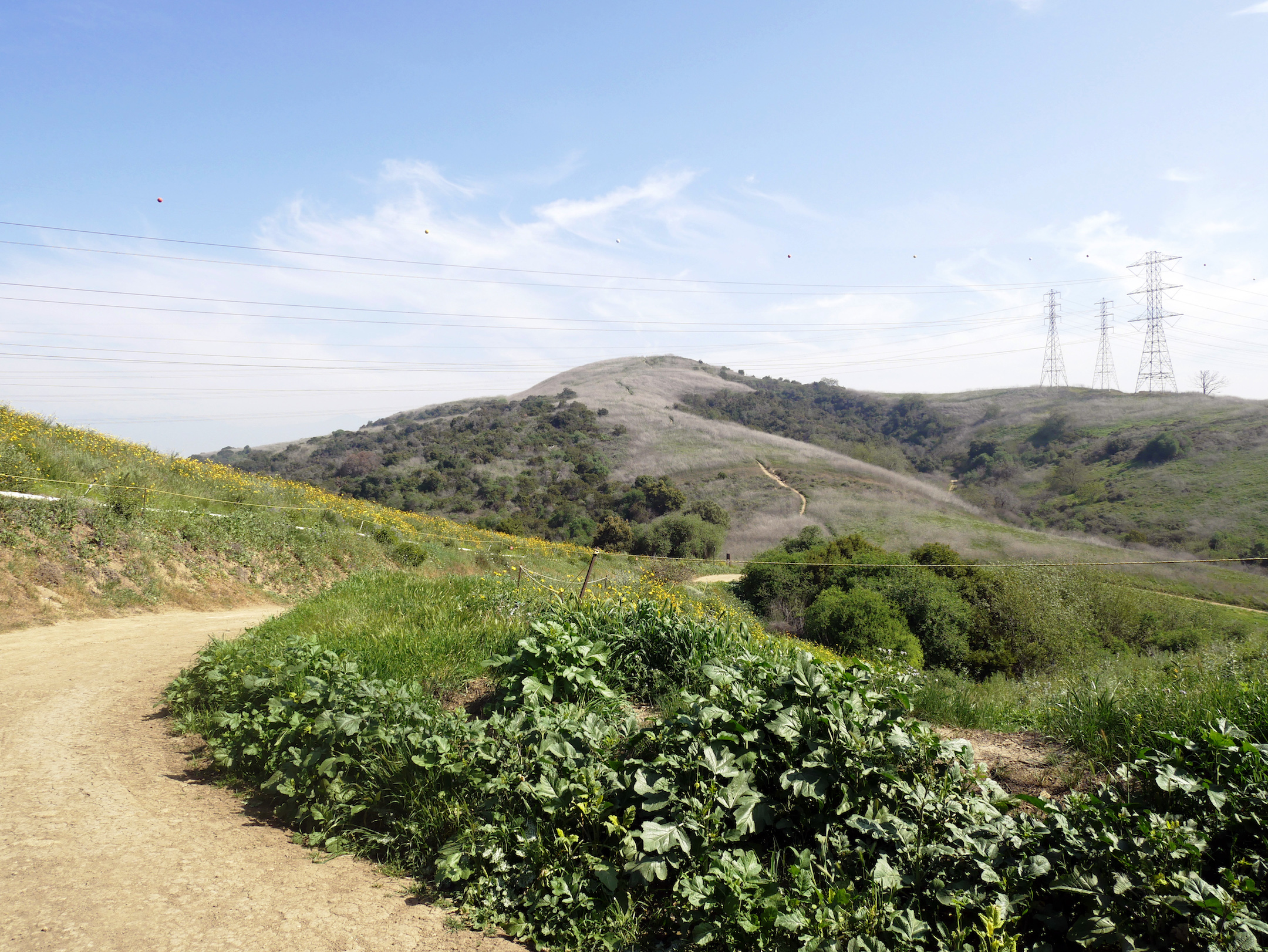 I turned back the way I had come, but the Powder Canyon Trail continued straight from that unmarked three-way junction. According to the Modern Hiker website, “once you start descending into Powder Canyon, the fire road narrows a bit and you’ll start to see some views of the San Gabriels through the end of the canyon. You cross into the boundary of Schabarum Regional Park just past the 0.9 mile marker and begin a slow descent inside the canyon. The Schabarum Trail Extension joins the Powder Canyon Trail at 1.2 miles.”

On my way back, I saw two horse riders on their way to the equestrian ring. I also noticed an interesting hole in a tree that made for a good photograph. At the junction by the Black Walnut Trail, there was a white sign reading, “Native habitat restoration in progress. You are within a preserved wilderness area.” From this sign, I learned that there was a total of 60 acres of native habitat being restored (53 of which is being created to benefit the coastal California gnatcatcher, a Federally Threatened songbird). Restoring this preserved area improves the health of the ecosystem, which also increases our benefit and enjoyment of the area. The County’s restoration activities include grazing, weed control, installation and removal of a temporary irrigation system, planting of native container plants, the application of native seed, and ongoing maintenance. The expected timeframe to establish this self-sustaining habitat will last until fall 2024. 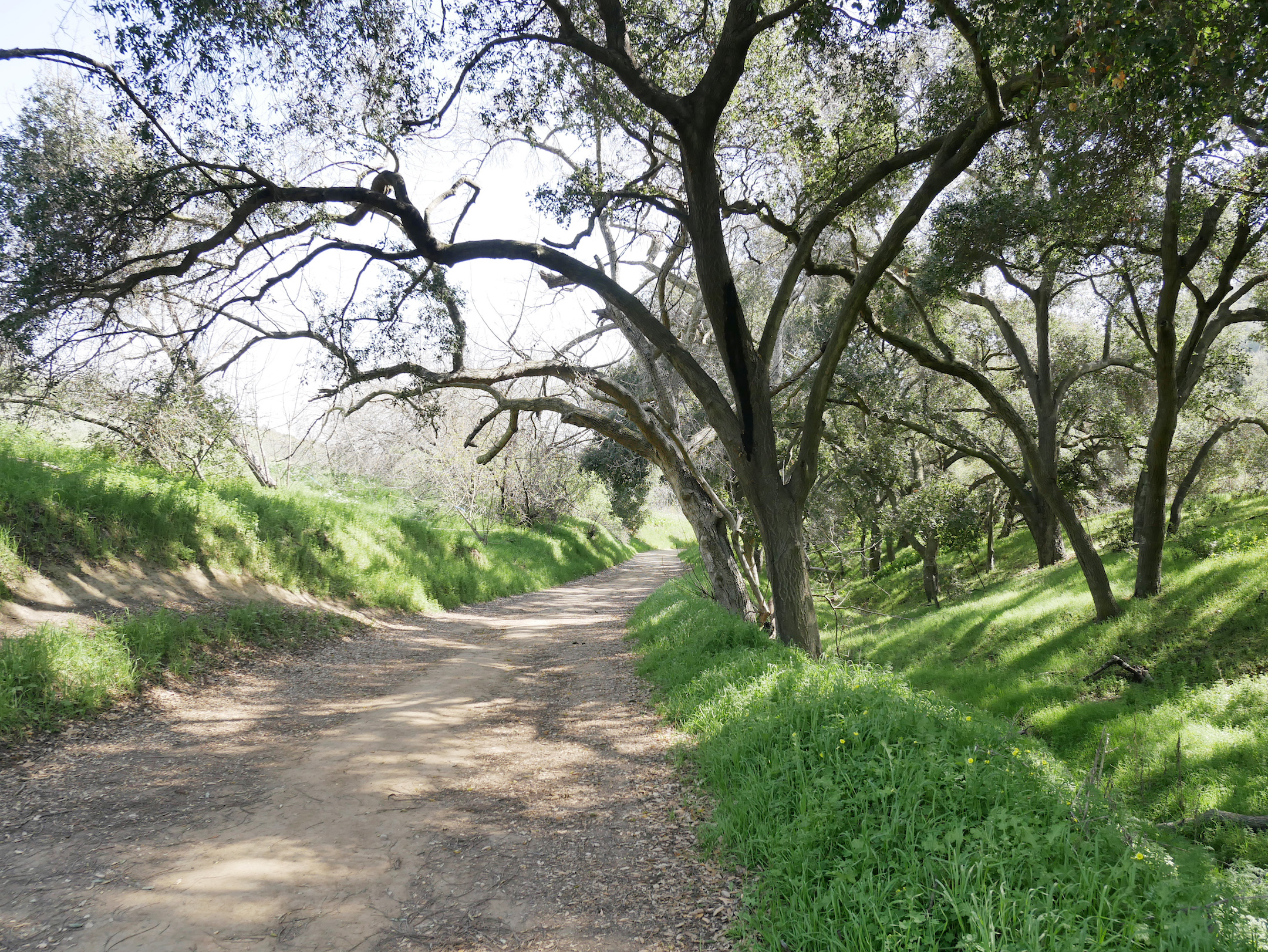 Also, as I got closer to the grove of California Live Oaks, I noticed a small box that had been locked up. There was a “Do Not Disturb” sign placed on it because a camera had been placed by a local government agency called the Habitat Authority. They had put that camera in that position to record and document the movement and activity of wildlife, such as coyotes, and bobcats. Overall, the Powder Canyon Trailhead seemed to be less traveled by hikers than others in the hills, which explained why at certain times along the path, I ended up having the place entirely to myself.

The trailhead is currently open from 9 am to 5 pm and from June 1st to September 30th, it’s open until 6 pm. To see what the trails through the mountains currently look like, see the video below.