A representative of FM3, a firm that specializes in public-policy oriented opinion research, gave the results of a community survey conducted with 515 residents who are likely voters, at the March 3 city council meeting.

According to the staff report, “The results of the survey indicated that respondents have mixed opinions about the City. They mostly consider it a good place to live and a safe community. But there is concern about the direction of the City and increased crime. Based on the responses, there is a strong sense that the City needs additional funding to address key priorities such as: homelessness, condition of streets and infrastructure and emergency response/public safety.”

Here are some of the results of the survey, along with more detailed slides from the presentation:

The City of Fullerton is going in the:

Your local neighborhood is going in the: 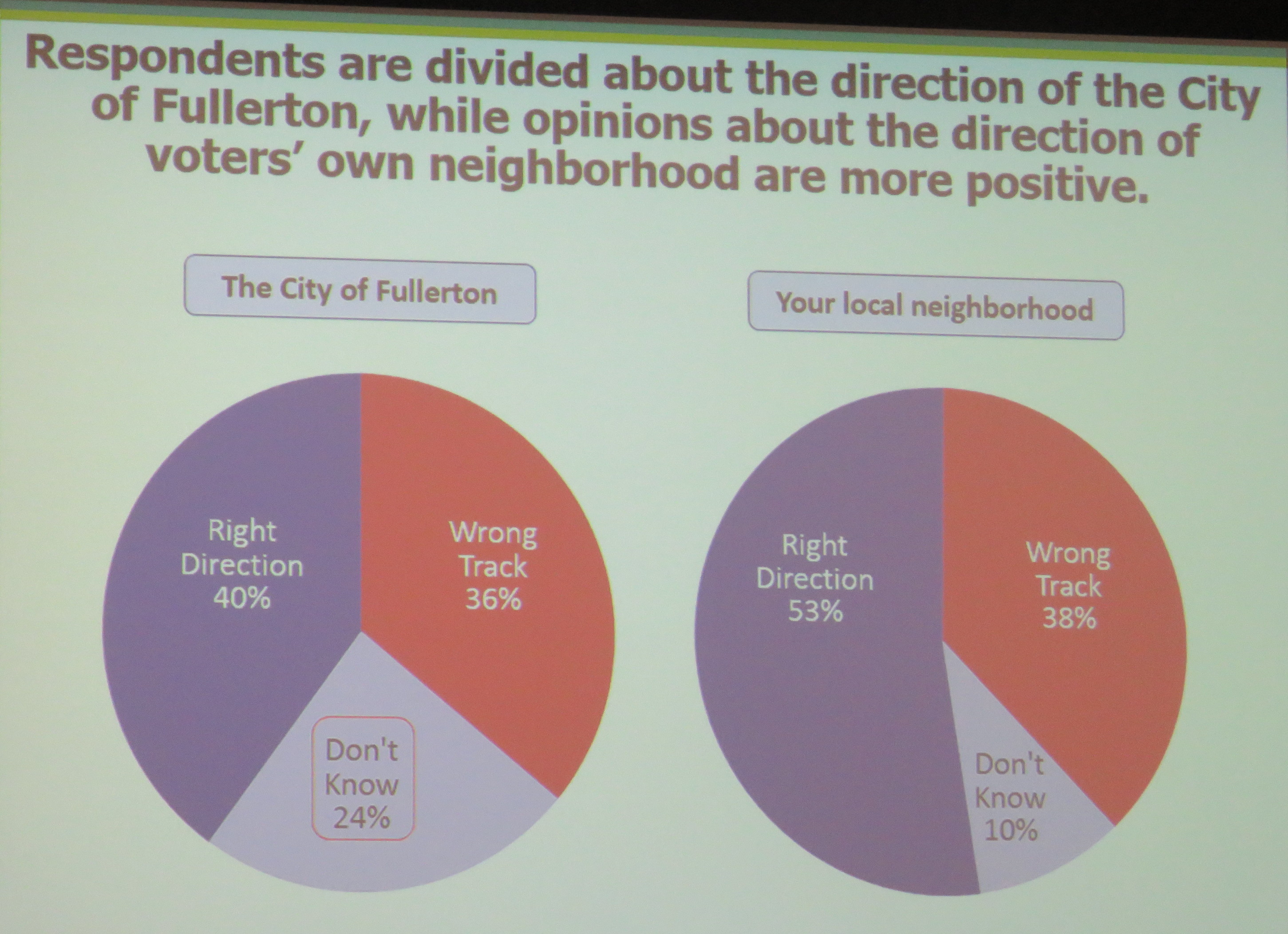 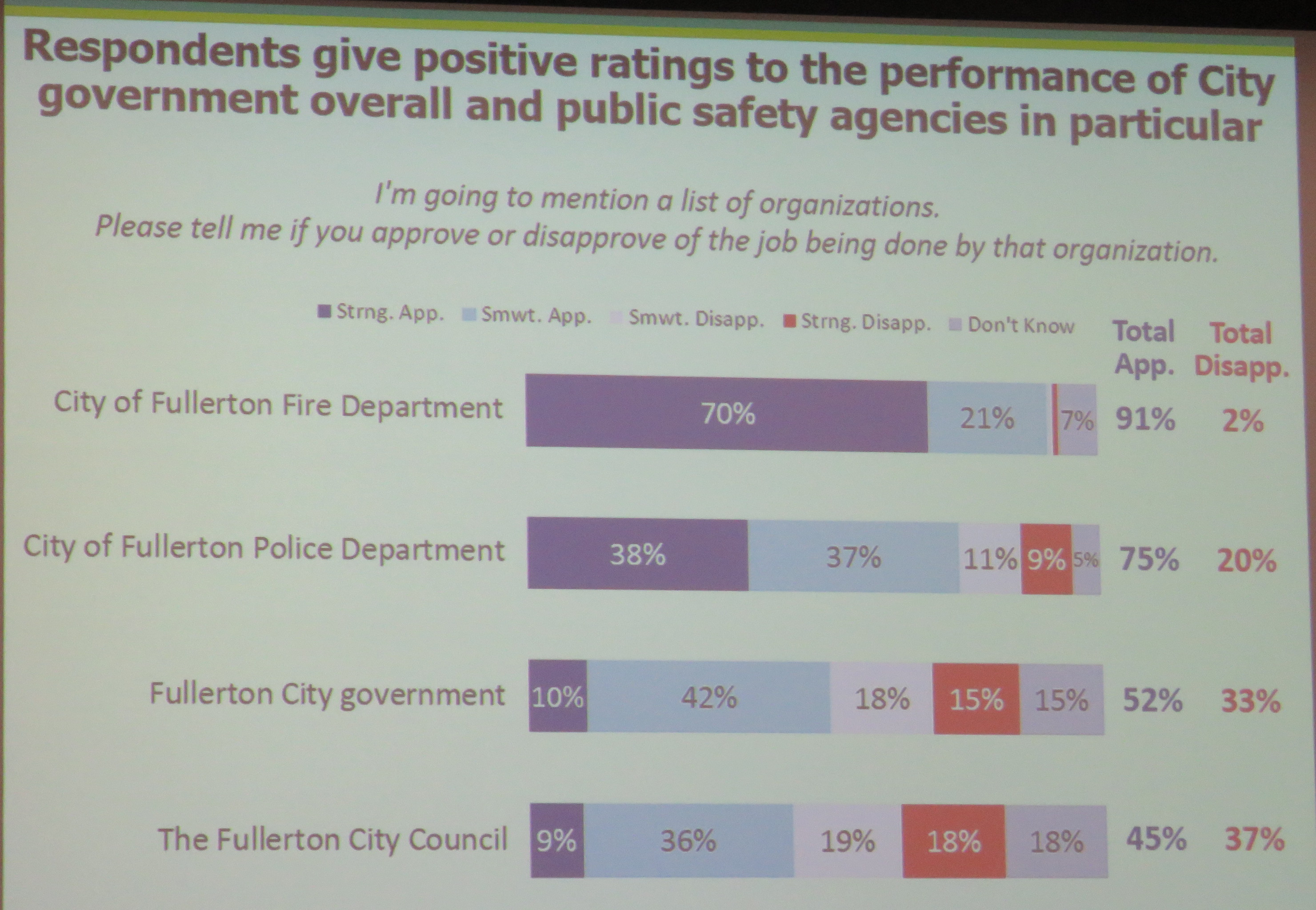 More than seven in ten respondents rate Fullerton as at least a “good” place to live.

A majority of respondents perceive that crime has increased in recent years, but Fullerton is still generally considered to be safe.

The city of Fullerton is a safe place to live, work, and raise a family:

Homelessness, the cost of housing and the condition of local streets are considered to be the most serious problems:

The number of homeless residents in the city: 78%

The condition of city streets and sidewalks: 64%

Property crimes such as home and auto break-ins: 42%

Waste and inefficiency in city government: 40% 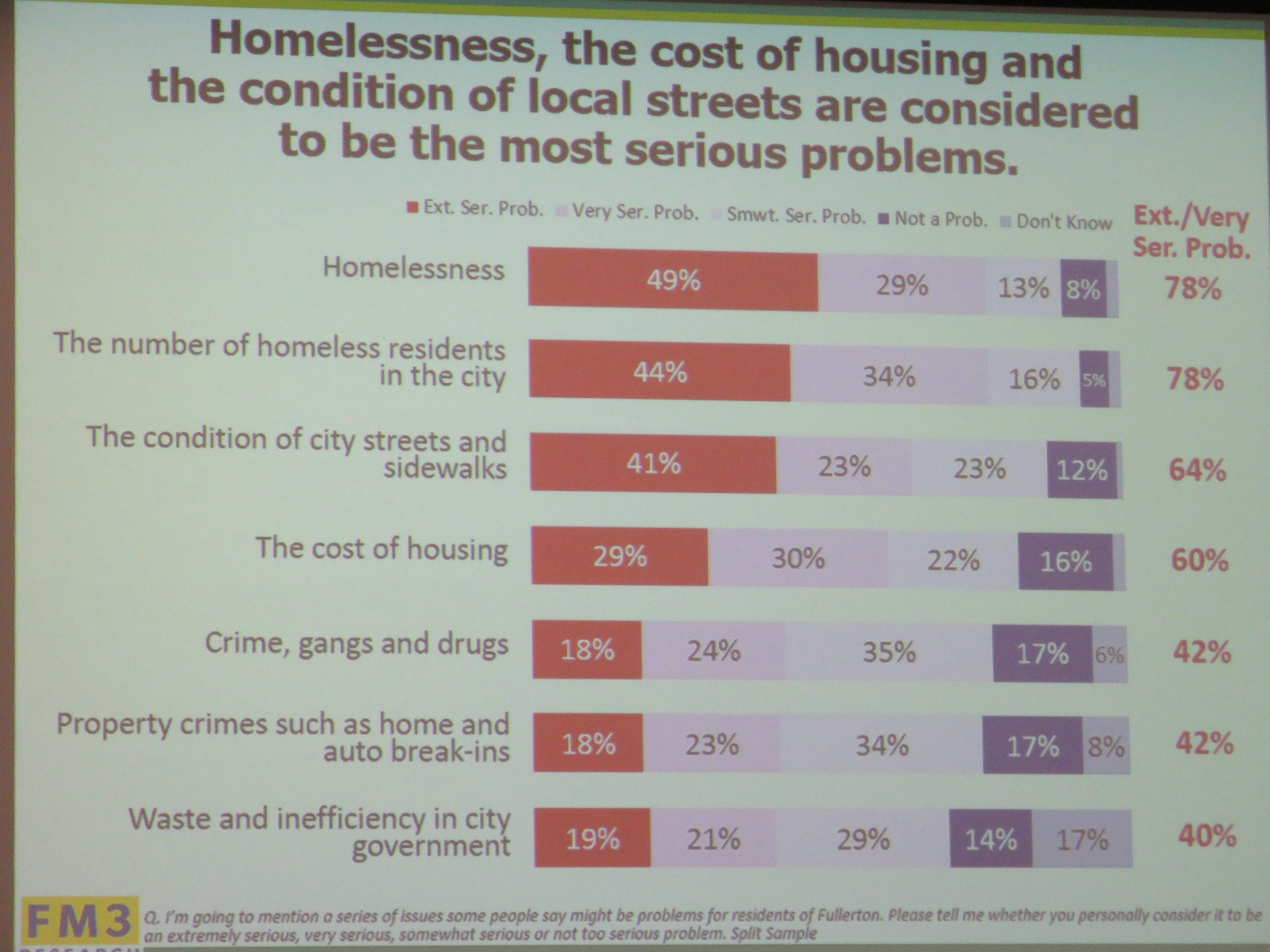 Seven in ten respondents believe the city has at least “some” need for additional funding to provide City Services.

The survey also polled residents about their likelihood to support new taxes (sales, parcel, and cannabis) to address city issues like infrastructure. Less than a majority of respondents support a streets-only parcel (property) tax that requires a two-thirds vote for passage. 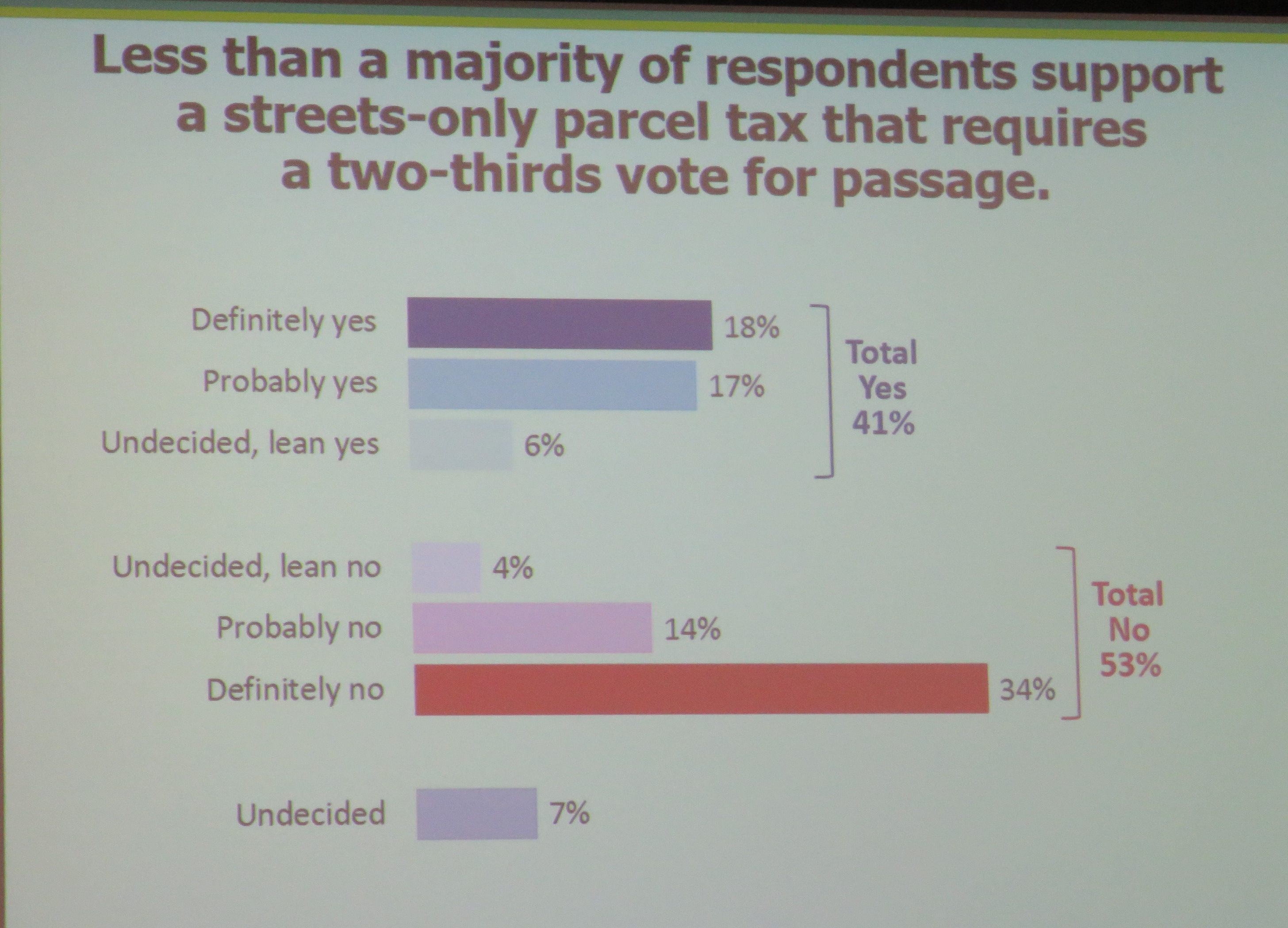 Nearly three-quarters of respondents believe it is appropriate for Fullerton City government to fund City services by taxing marijuana sales. 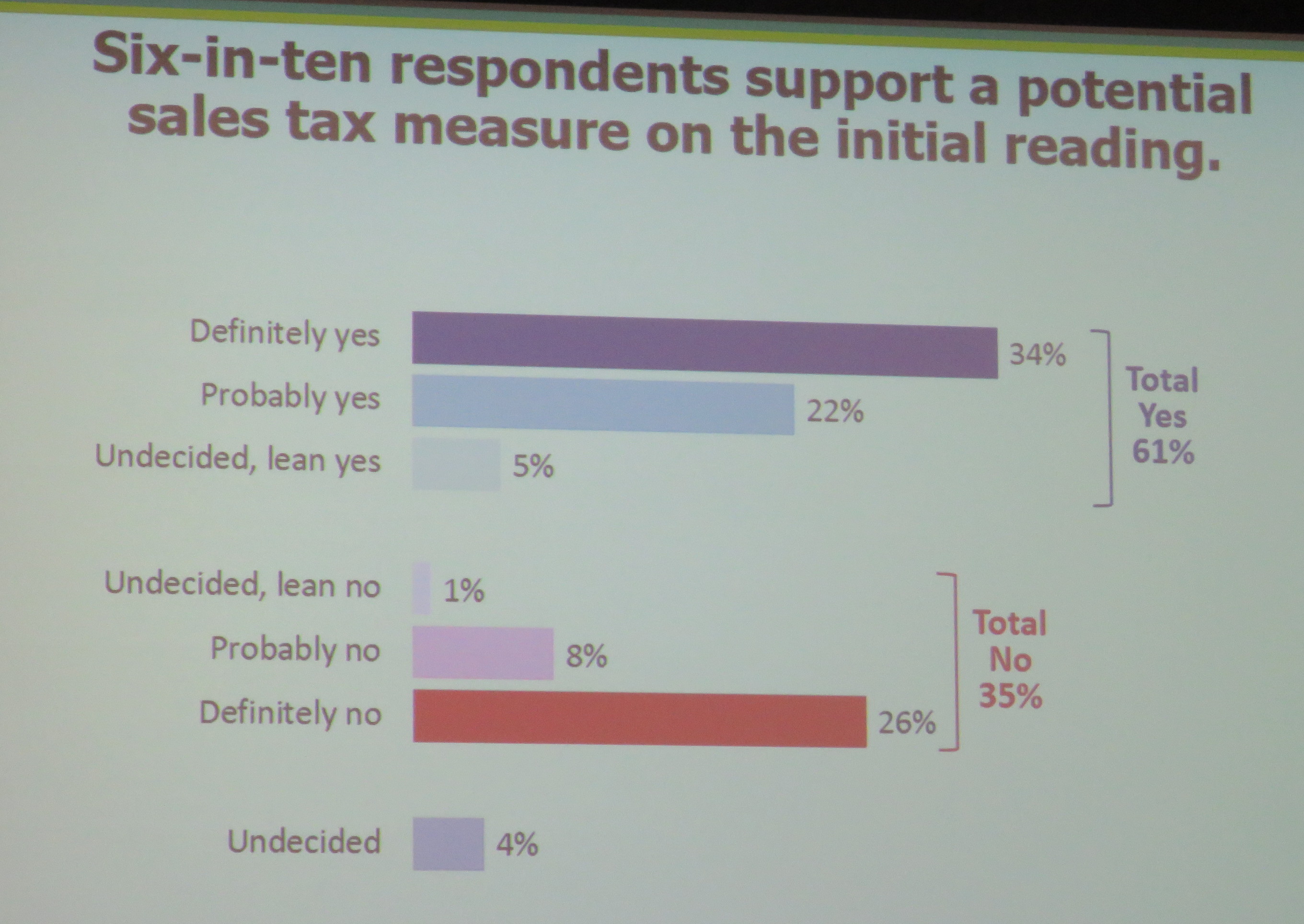 Respondents have mixed opinions about the city: they mostly consider it a good place to live and a safe community. But there is concern about the direction of the City and homelessness.

There is a strong sense that the City needs additional funding.

With that background, a potential one percent, general purpose sales tax ballot measure is clearly viable for further planning, according to FM3. 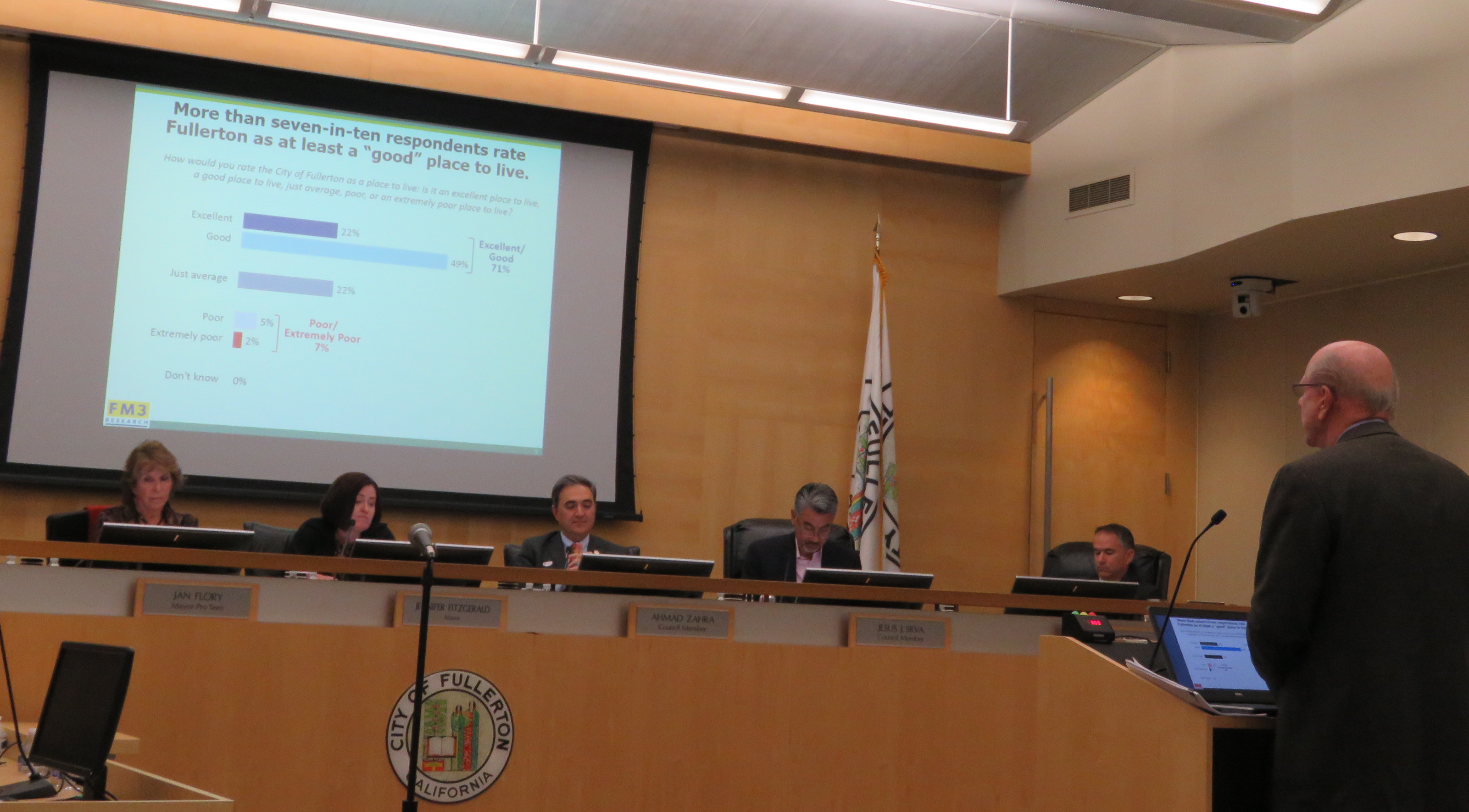 A representative of FM3 presents the community survey results to city council.