According to Orange County’s new Health Care Agency Director, Dr. Clayton Chau, Orange County is experiencing a slight uptick in numbers of COVID-19 infectious cases. Each day, the County’s Health Care Agency’s website (occovid19.ochealthinfo.com) updates the numbers of infections, deaths, and hospitalizations broken down by ICU cases, as well as the cumulative counts for each statistic, and other figures related to the ongoing pandemic.

On May 14, during the County HCA’s weekly live-streamed update, Dr. Chau attributed the rise in infections not to increased testing, but to infections and hospitalizations of congregate populations, namely those in skilled nursing facilities and jails, both sites of alarming spread of the virus. 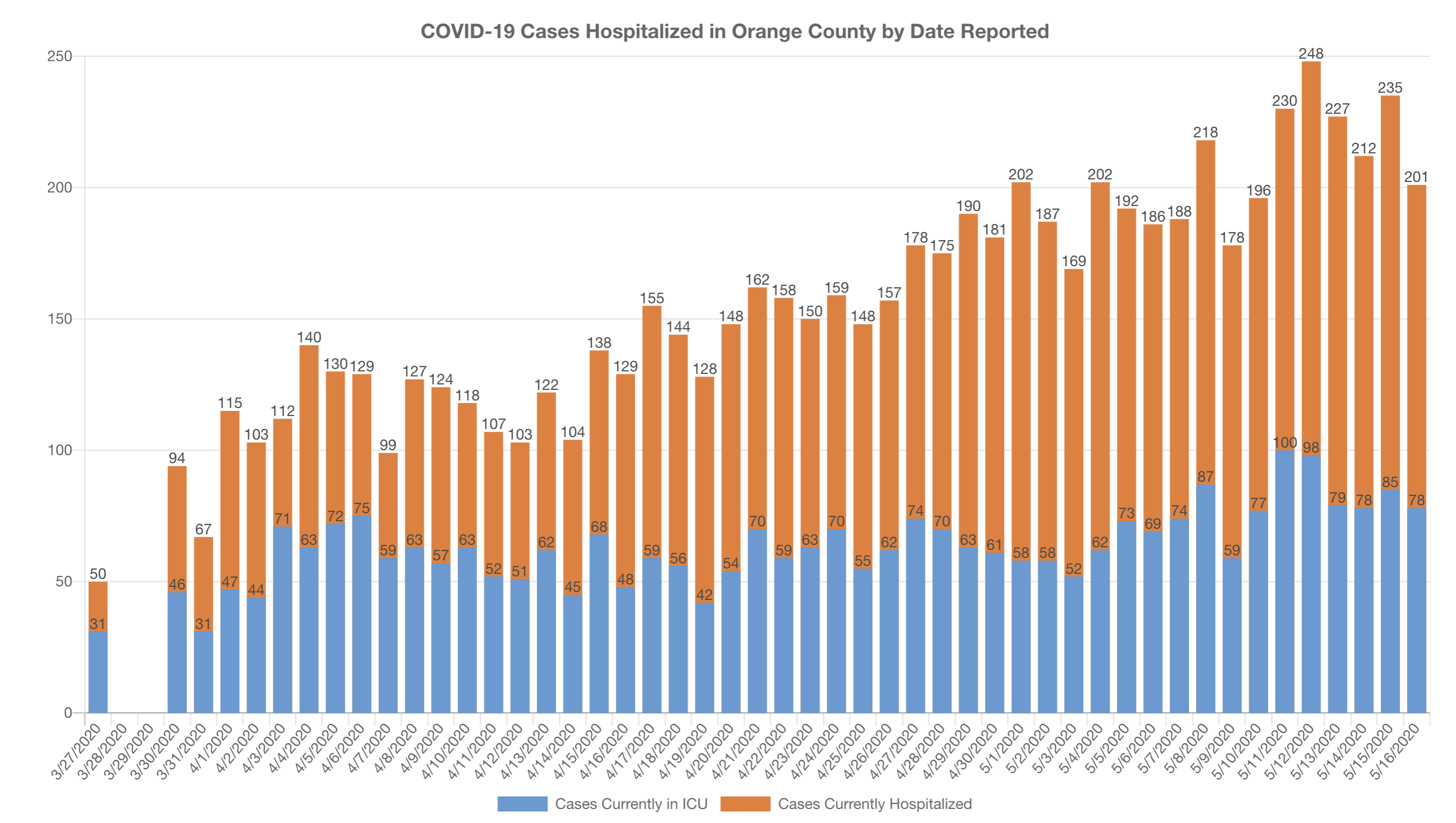 During the same May 14 briefing, Board of Supervisors Chair Michelle Steel announced 229 new cases, a sharp increase from 156 new cases the previous day, and the first day to top 200 since the County began reporting in March. In all, over 4,000 people in the County are known to have been infected. More than 80 have died from it. Rates of hospitalization have steadily risen standing currently at just below 250, with fewer than half in ICUs. Recovery rates are still not being reported.

Latinos account for just under 35% of OC’s population, but represent an outsized 52% of known infections. 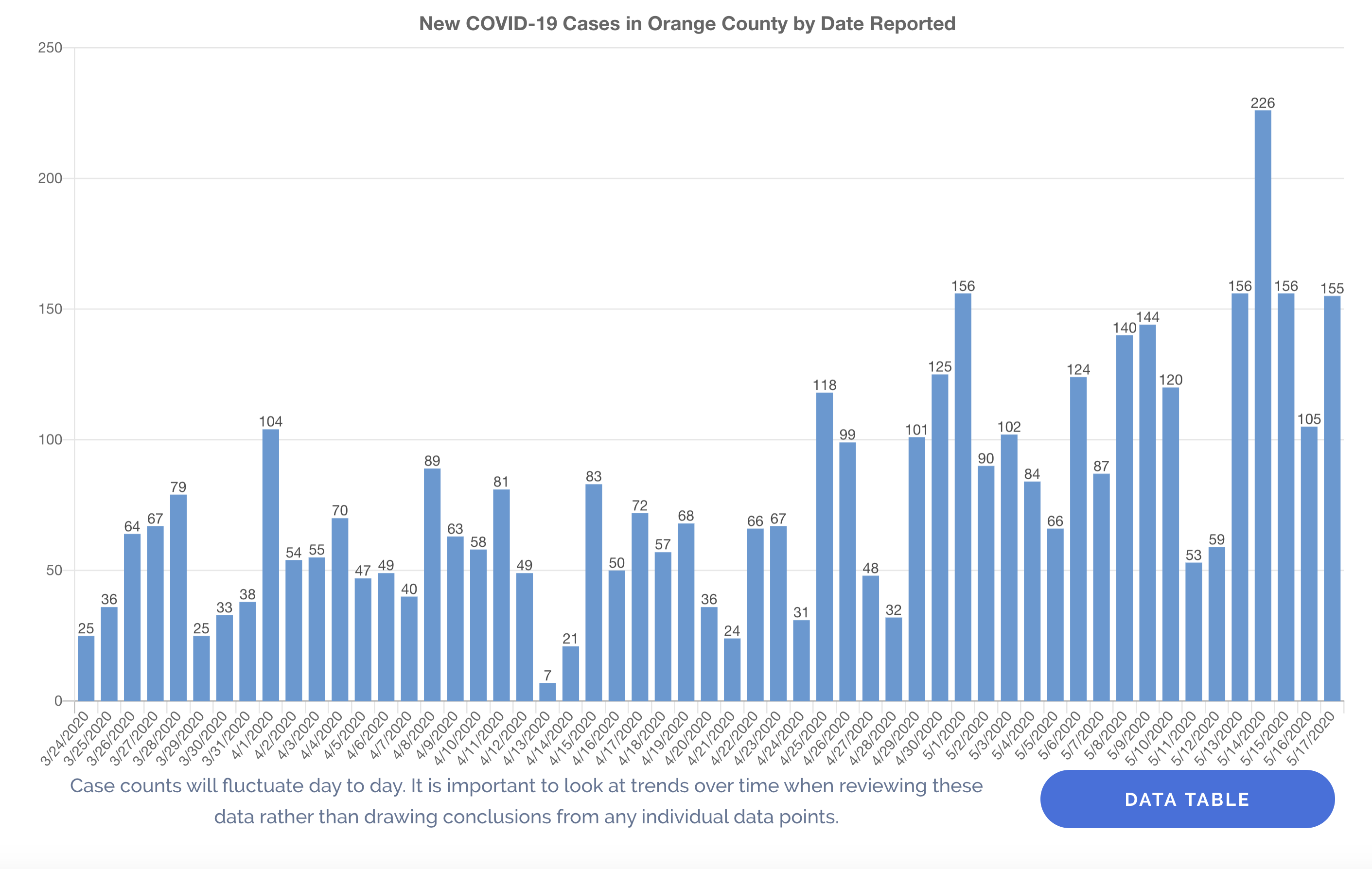 Testing for COVOID-19 in OC

Orange County lags behind the much less populous Riverside and nearly equally populous San Diego County in its overall tests performed. Alarmed by the disparity, OC’s congressional delegation has collectively expressed concerns about OC’s low testing rate. A May 13 letter addressed to Dr. Chau and signed by seven members of the U.S. Congress whose districts are in Orange County wrote that “a significant portion of individuals with COVID-19 are asymptomatic, especially critical to quickly identify and contain small outbreaks and strengthen public confidence as the state gradually relaxes its Stay-at-Home order.”

The OC’s Healthcare Agency (OCHCA) continues to cite a shortage of supplies needed for more testing. “Testing for COVID-19 remains a high priority for the county of Orange and provides critical information to inform response efforts. The scarcity of supplies, however, is a challenge as the demand for testing is high throughout the Country,” reads its website. Testing is seen not only as a way to identify and treat those suffering from the virus, but also as crucial to tracking its progress. 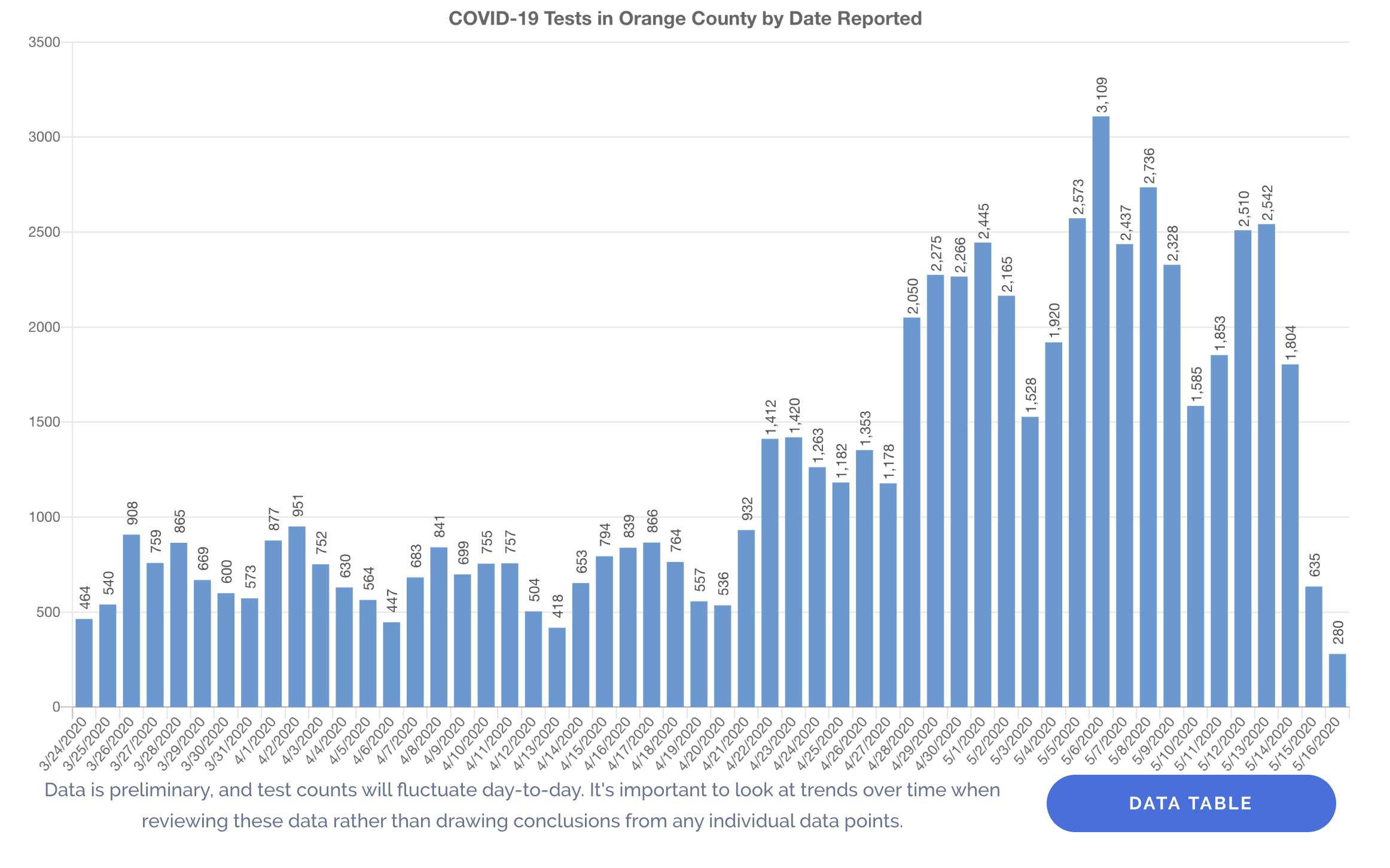 Responding to the Congressional letter two days later, Michelle Steel insisted that OC does not have a testing shortage, and that the County has the capacity to conduct 9,000 tests per day. The California Department of Public Health issued new guidelines the prior week that expand testing into new categories, under which counties are permitted to test more, she said, leading the County to begin testing asymptomatic people in the highest risk categories, including frontline health workers and first responders.

OCHCA has also been testing more staff and residents of senior housing facilities in recent days, and all jail staff are reported to have been tested. The State, which licenses senior housing facilities, does not currently require staff to be tested, although County health officials insist that they are strongly encouraging management to avail themselves of testing opportunities. According to Dr. Chau, the County is partnering with the CDPH to establish new testing centers in Buena Park, Orange, Santa Ana, and San Juan Capistrano. The County expects to increase its testing by 2,640 per week.

Since the pandemic began, over 66,000 COVID-19 tests have been administered in the county. Currently 6.3% of the tests are positive for the virus. Steel predicted that the rate would slowly decrease over time as more testing occurs. “A decreasing positive test percentage is a good sign,” Steel said, although Dr. Chau acknowledged that testing more asymptomatic people would be expected to show a lower positive rate, leaving open the question of whether the rate of infections was on the decrease or the lower positive rate touted by Steel is simply a statistical result of testing a larger number of residents who don’t exhibit symptoms, and might be less likely to have the virus. Chau did note, however, that the “vast majority” of people with symptoms either have a flu, cold, or some other non-COVID condition.

Financial Toll of the Pandemic

The pandemic’s financial toll continues to cascade downward from State to county level. Governor Gavin Newsom released a revised budget estimate on May 14 that reflects a deficit of $54 million, reflecting lost tax revenues caused by mandated closures. Newsom, along with all of OC’s Supervisors and Mayors, is asking the U.S. Congress to include direct funding of cities in its current federal relief legislation. That same day President Donald Trump characterized the Pelosi-backed HEROES Act, which many OC mayors are counting on to help bail out their cities, as “Dead on arrival.”

The steep reversal of the State’s financial condition, expected to wipe out its $21 billion reserve fund, will be felt in counties across California. County CEO Frank Kim anticipated a struggle to meet even basic needs by the OC Sheriff Department and the OC District Attorney in the face of an anticipated combined loss of over $140 million to the two agencies. The County’s social safety net will lose administrative staff who facilitate the delivery of crucial services to residents during a period when there has been a 100% increase in food assistance requests and a 20% rise in demand for Medi-Cal health coverage.

The State government has provided a 4-phased template for the reopening of businesses and facilities throughout the State. The current stage, 2, allows for some non-essential businesses to open with modified conditions to accommodate social distancing and other virus-related precautions. The State guidelines allow for “regional variance criteria” in recognition of different conditions existing between counties. The OC Board of Supervisors has been presented with what Dr. Chau called a dynamic plan to meet reopening goals. It was developed by OCHCA and designed to change as circumstances dictate.

Members of the Board of Supervisors, as well as Fullerton’s Mayor Jennifer Fitzgerald, have chafed at what they consider unduly strict guidelines for counties to reopen, including a requirement of no deaths for a period of 14 days, and no more than 1 infection per 10,000 residents for the same period of time. The criteria also included a minimum daily testing capacity of 1.5 per 1,000 residents, putting further pressure on the County to make more testing available. 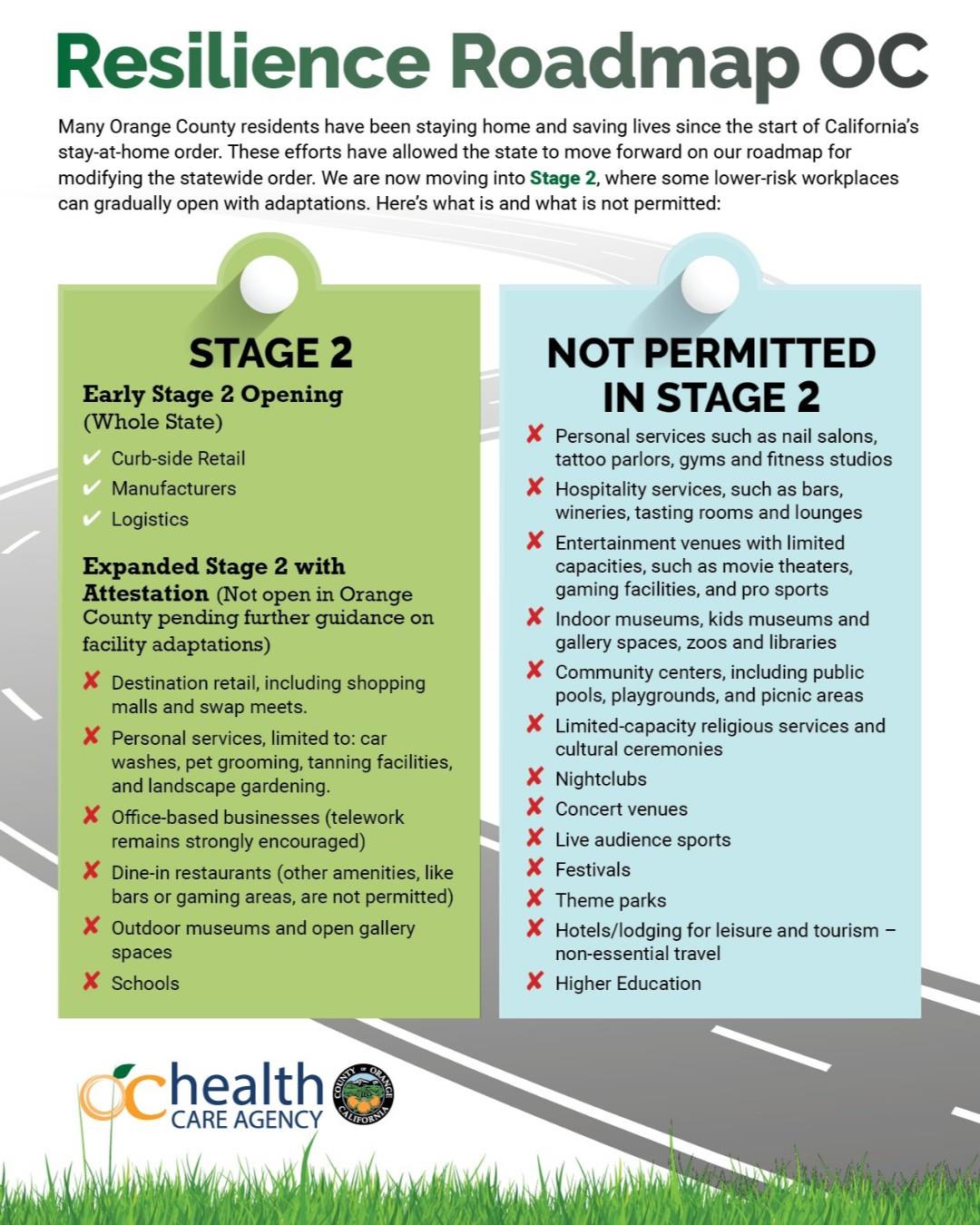 How the County is Spending CARES Act Funds

On May 19, the County Board of Supervisors is expected to discuss how to spend the $544 million it received from the federal government’s CARES Act. The Act contained no direct funding to cities with populations under 500,000, effectively excluding any city

in Orange County. CEO Frank Kim indicated that at least some of the funding could be used for additional contract tracing (another requirement of the variance criteria), hotel rooms, serology tests, and to bridge gaps in safety net funding. He said his office is waiting for more guidance from the federal government, and expressed a preference for more flexibility in spending the money.

Chair Steel and Supervisor Donald Wagner support directing $75 million of the funds to OC cities to assist businesses with economic recovery. Their motion to do so was defeated 3-2 in the last meeting of the Supervisors, with 4th District Supervisor Doug Chaffee voting against it.