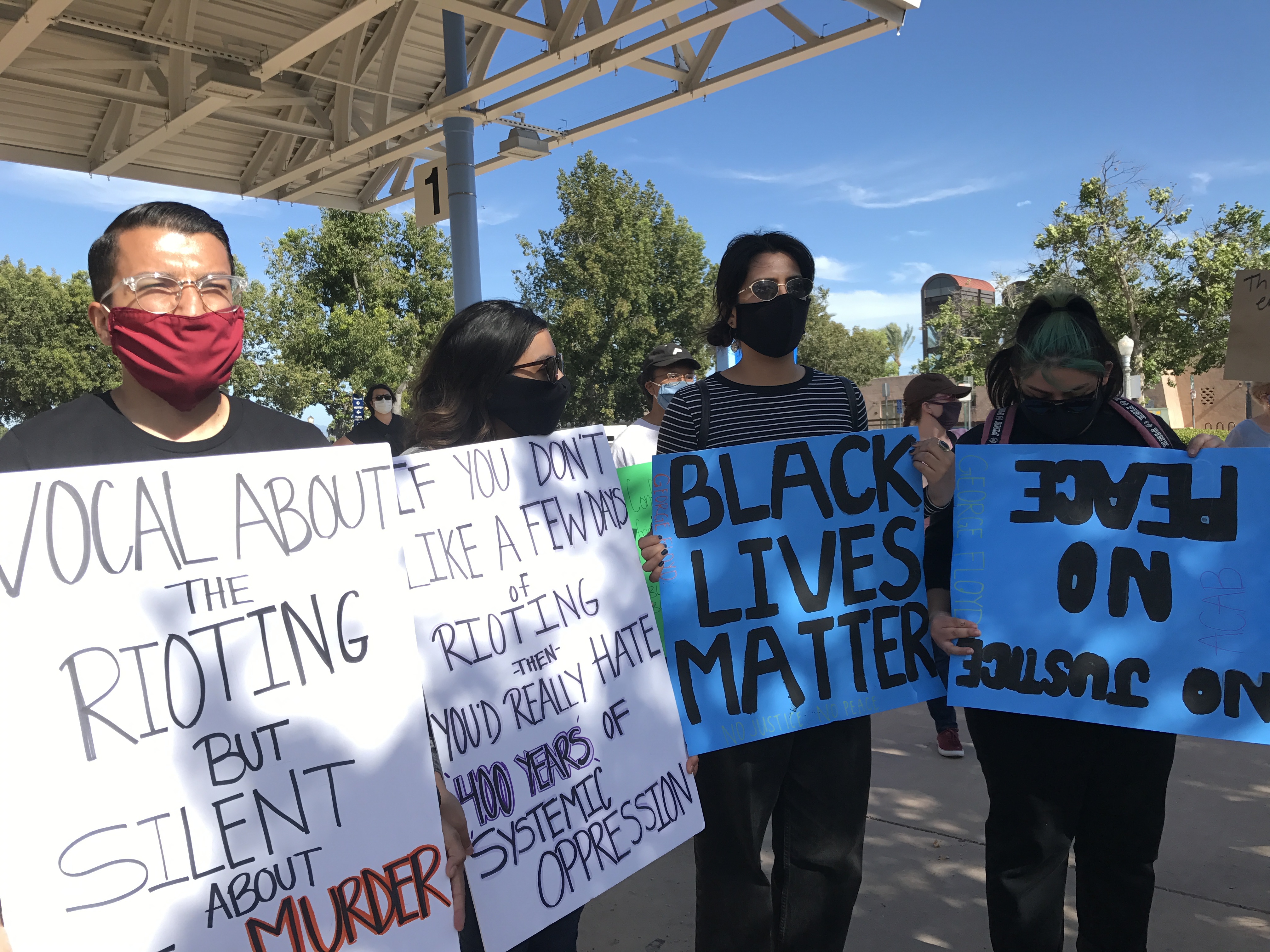 Demonstrators gather to protest the police killing of George Floyd

About 150 people carrying signs gathered and listened to families whose loved ones were killed by police, some still awaiting answers, all awaiting justice. Youth, activists, and community members, many who knew each other from the weekly protests demanding justice for the murder of Kelly Thomas rallied together.

The day prior, Fullerton Police Chief Dunn had alerted local restaurants in the area and told residents to stay away from the area to avoid the protest. Police handed out pamphlets to demonstrators as they arrived to alert them that, while the Fullerton PD supports peaceful protest, participants should not block driveways, sidewalks, or traffic, nor should they “disrupt or terrorize” the community. A drone flew overhead to surveil the crowd’s actions. 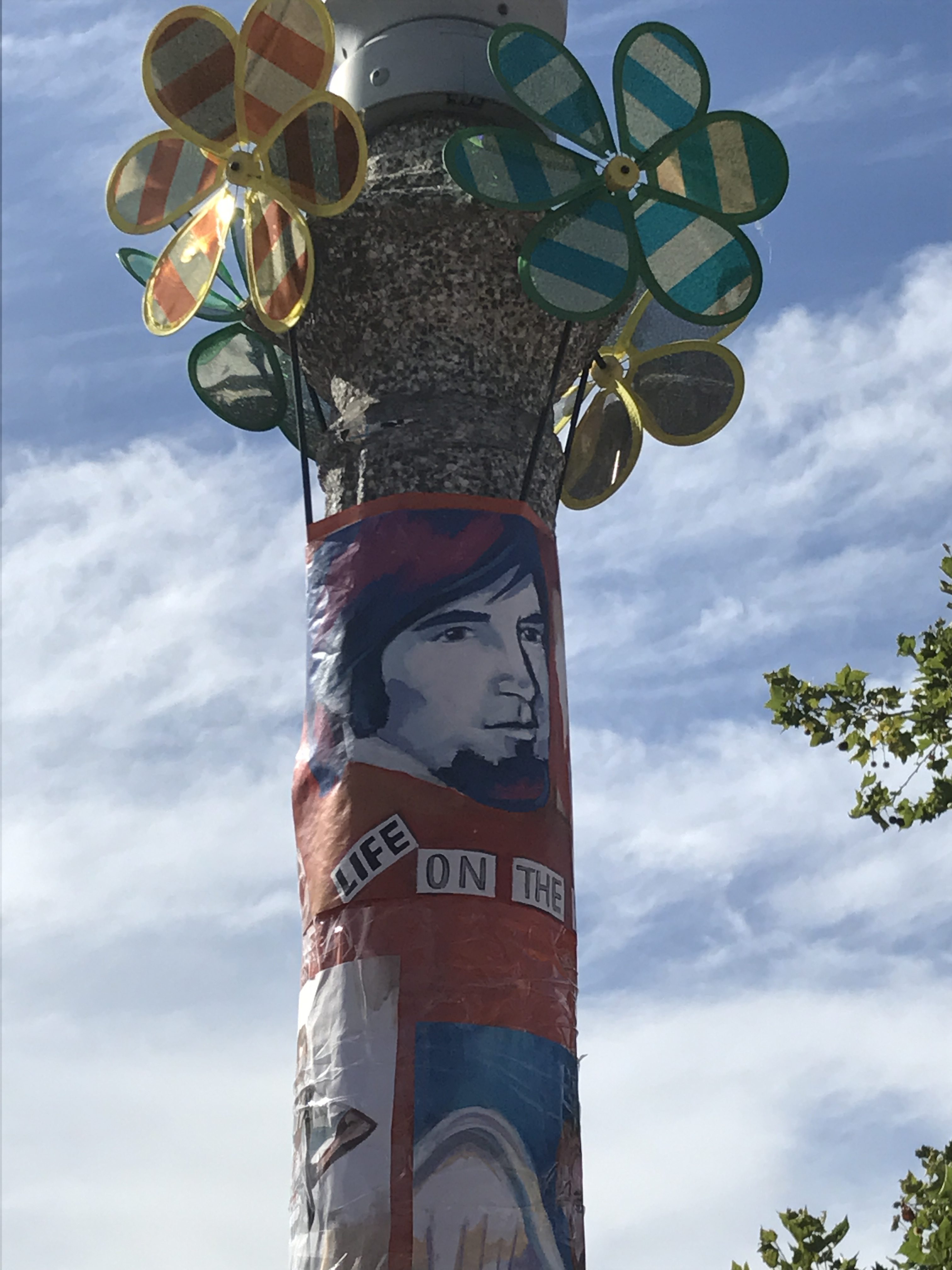 Demonstrators gathered at the memorial to Kelly Thomas

About 5pm the group took to the street, marching on Commonwealth, impeding westbound traffic. As they neared the police station, police cars blockaded the street  east of the marchers. 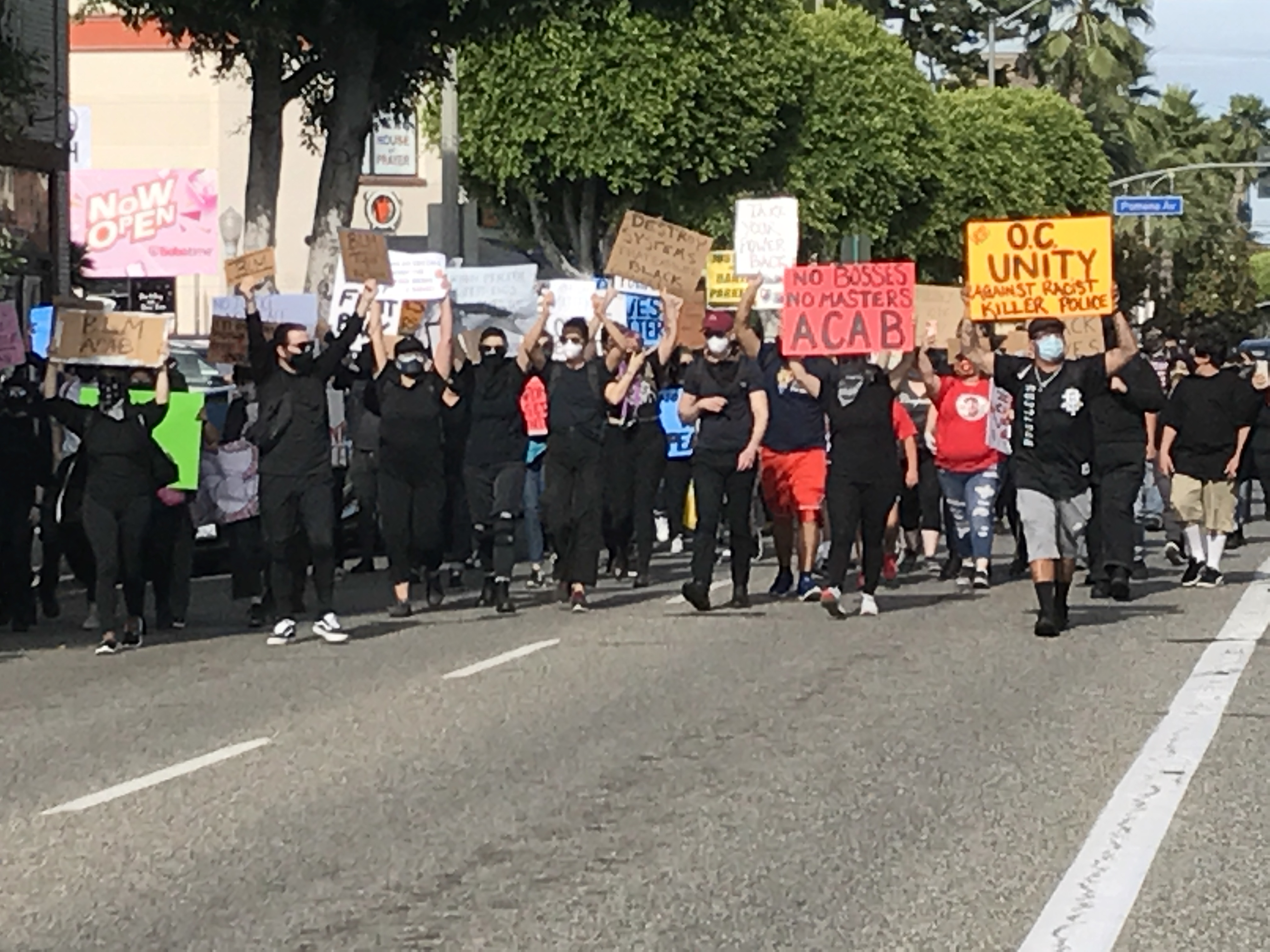 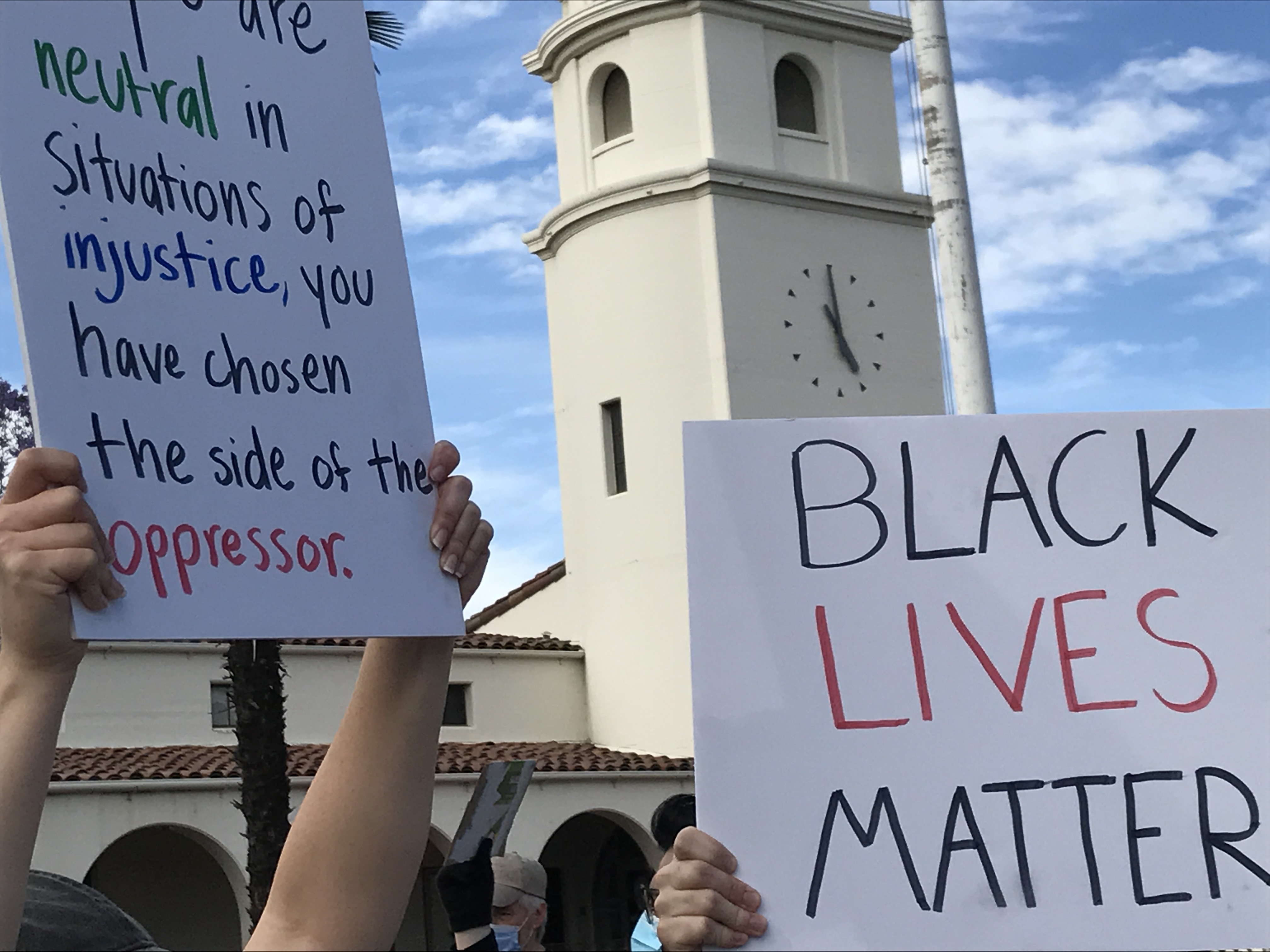 A young man in a gold SUV attempted to drive through the crowd. The driver accelerated into a man who had his belly against the hood. The man jumped back to avoid being injured. Another man opened the passenger door but was pulled back by others as the car lunged forward repeatedly. A woman then stood in front of the car until she was pulled away by bystanders while the driver continued to lunge his car into the crowd until they parted. 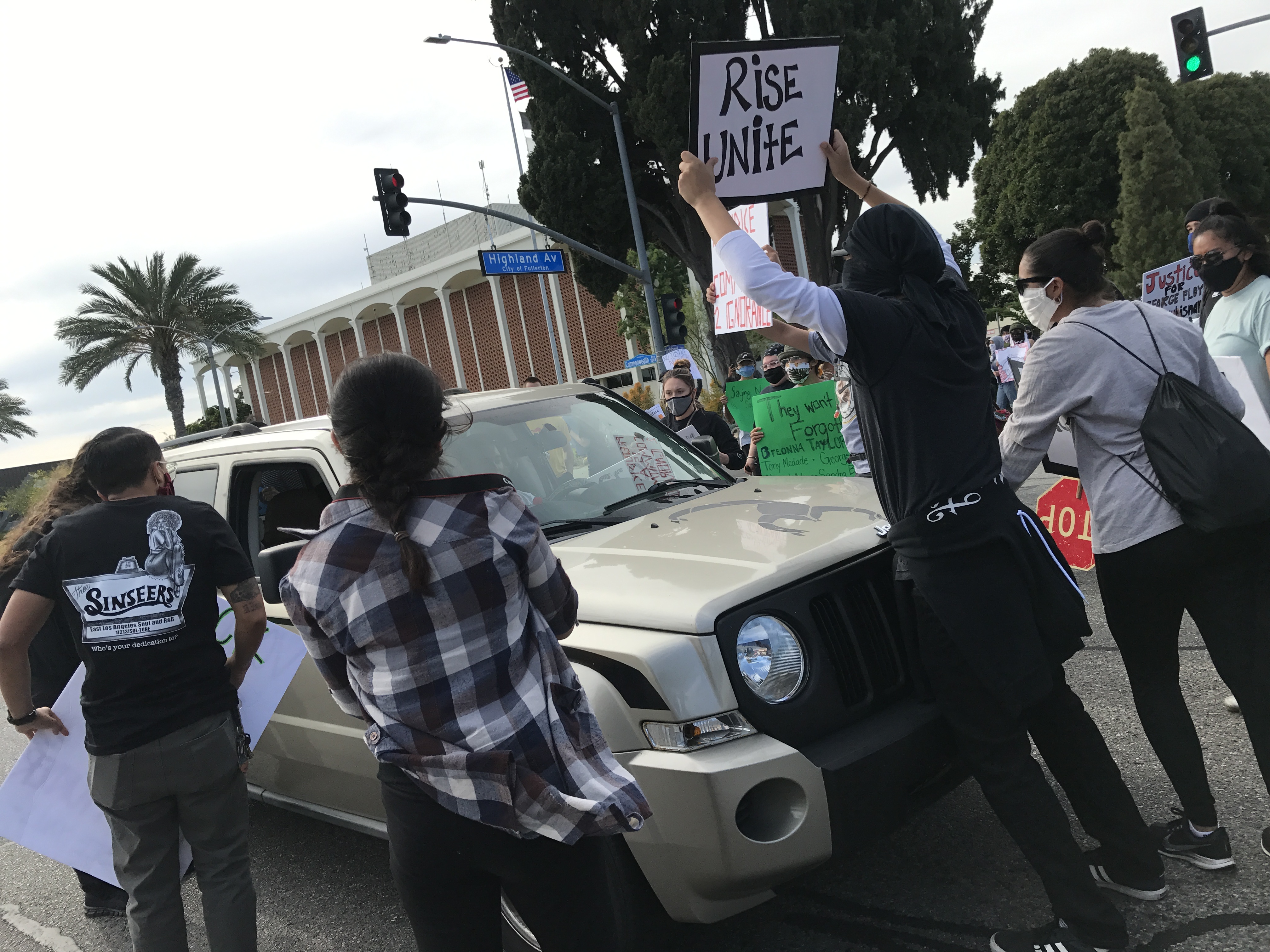 Driver attempts to push through crowd

Demonstrators took a knee and raised a fist in solidarity with the Black Lives Matter movement and in remembrance of George Floyd. They stood and chanted in the intersection blocking all directions of traffic. 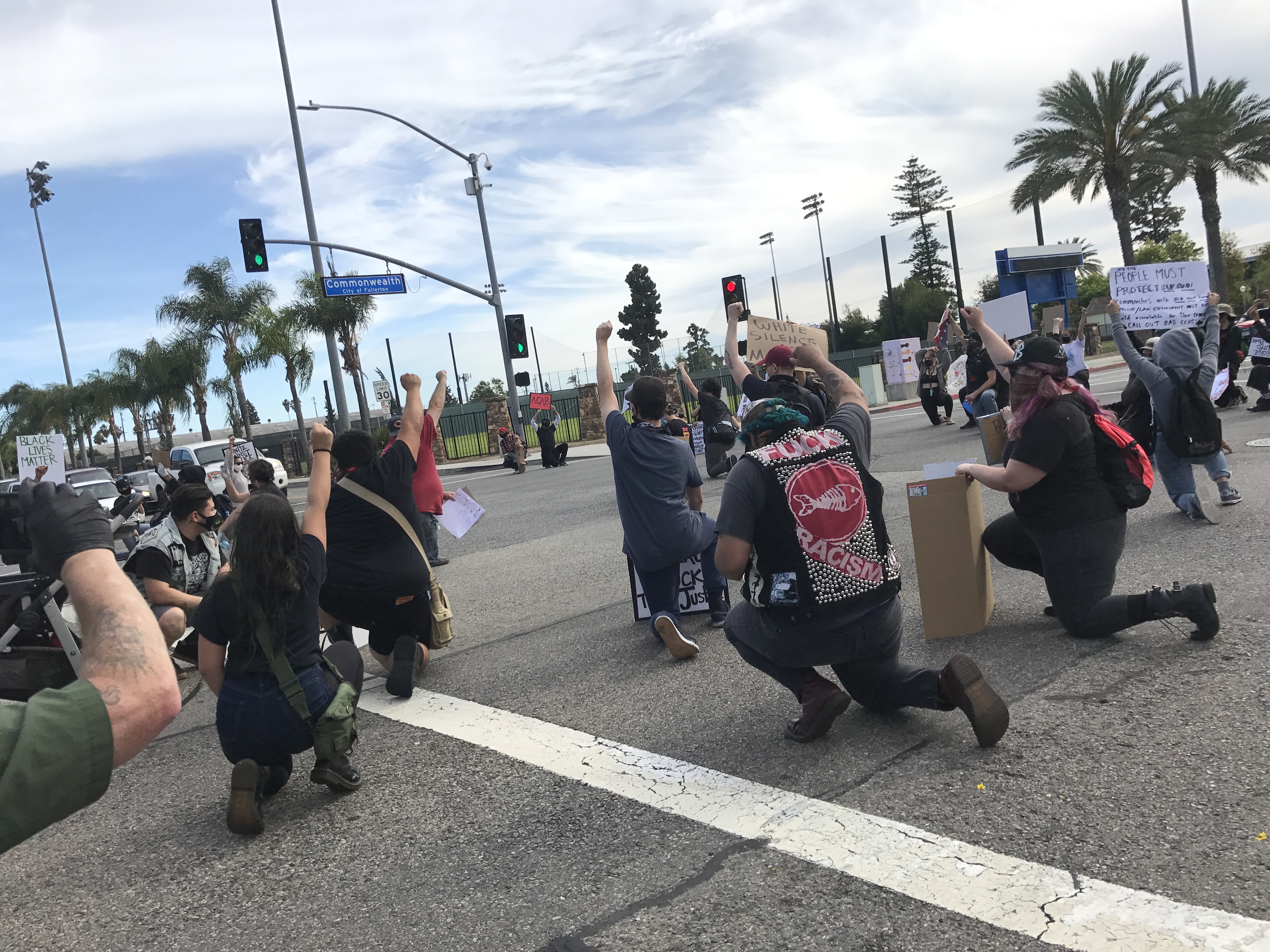 Taking a knee in the street for Black Lives 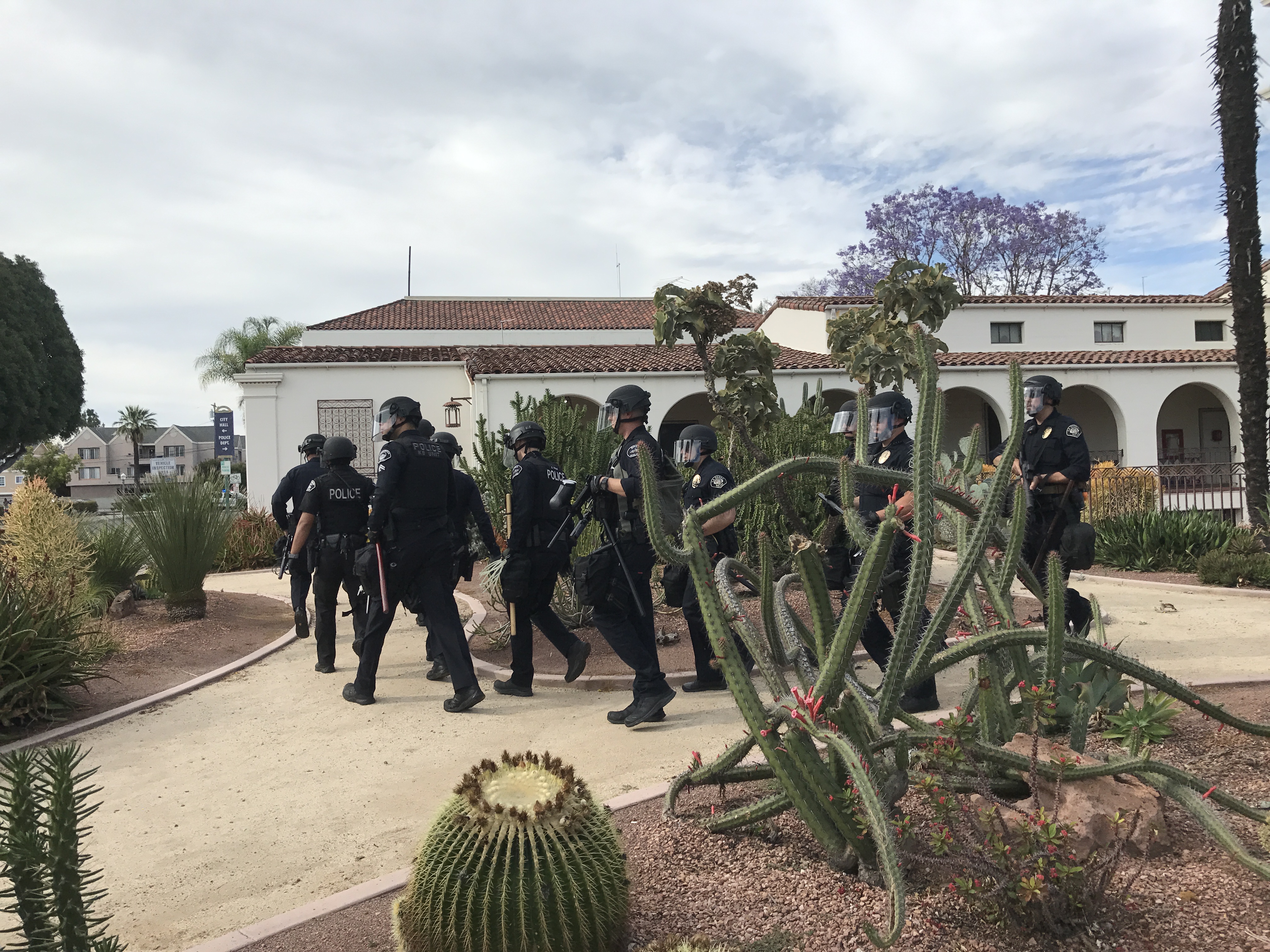 The crowd moved west of Highland on Commonwealth. As police ordered them to disperse, many moved onto the sidewalks and began to leave. The remainder continued their march south onto Highland and then returned to where they began at the Transportation Center. 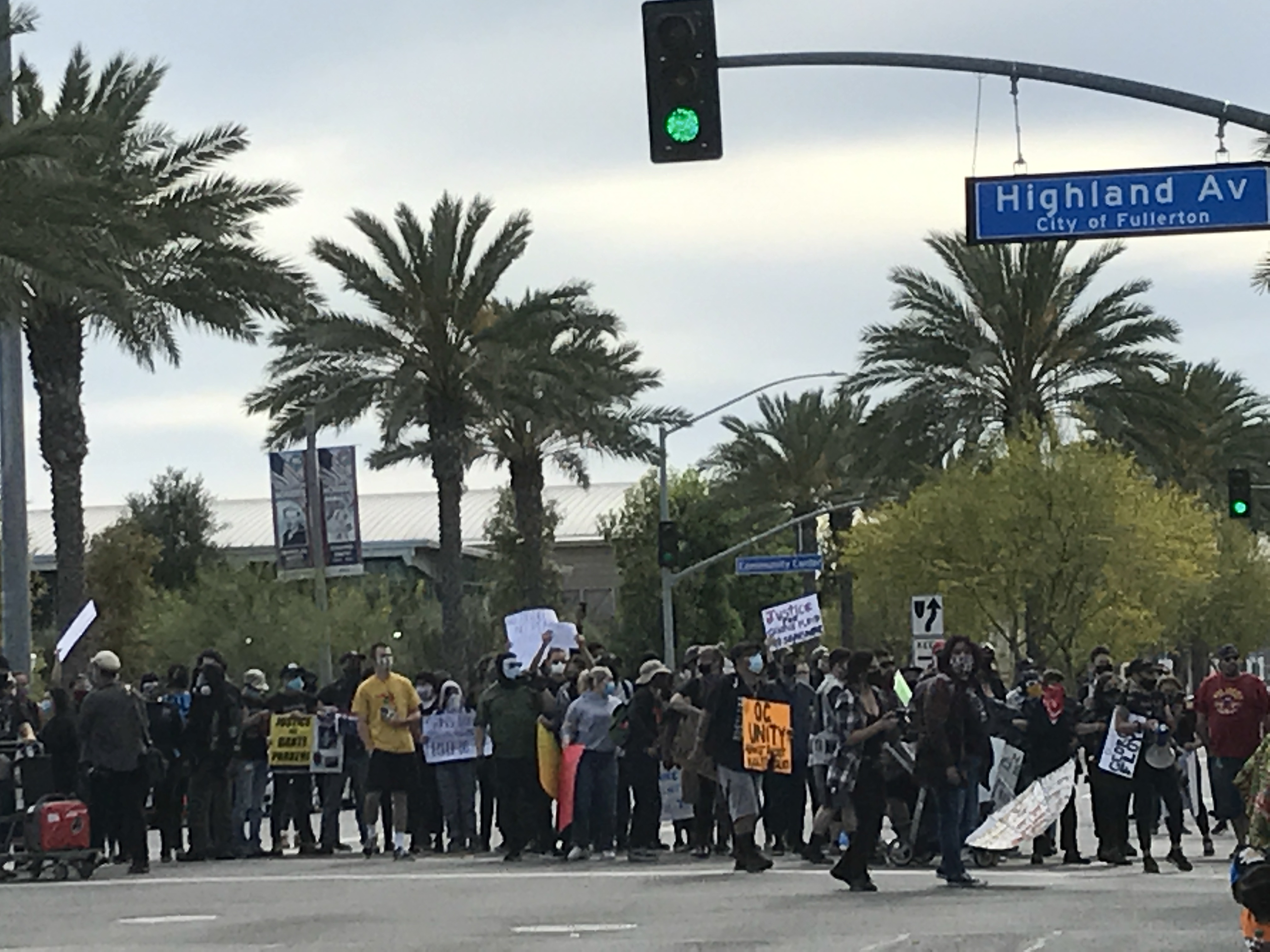 After another rally, some demonstrators left. But others took to the street again, marching west on Commonwealth back to the police station at Highland. The Fullerton PD in riot gear and the SWAT vehicle were lined up waiting on Highland north of Commonwealth. Police cars blockaded Commonwealth from both the east and the west. 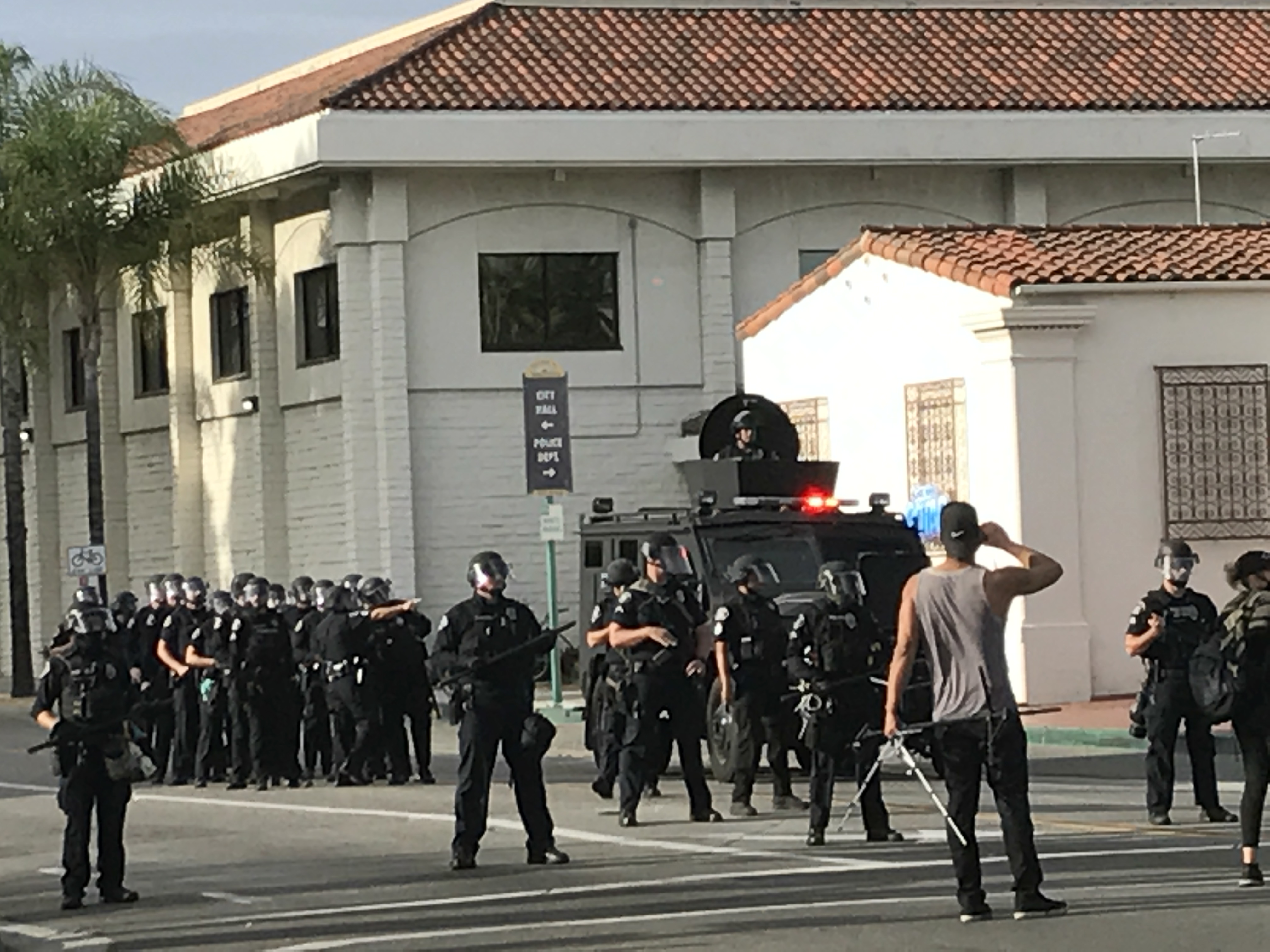 The crowd was ordered to disperse and then the front line of officers advanced. The demonstrators retreated to south of Commonwealth on Highland where one woman kneeled and then sat in the street. Other women appeared to attempt to dialogue with police. 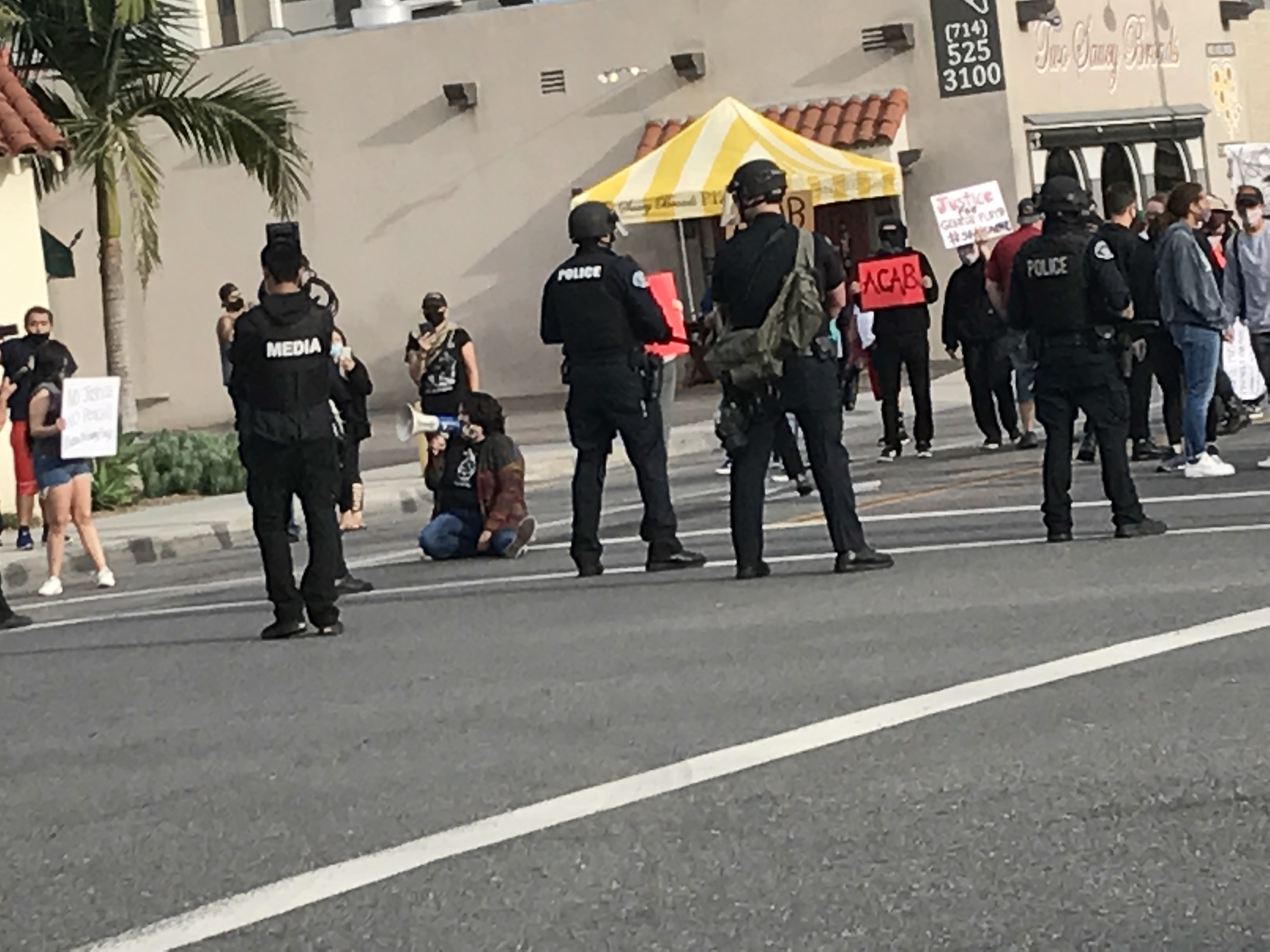 Passive protestor remains in street after order to disperse 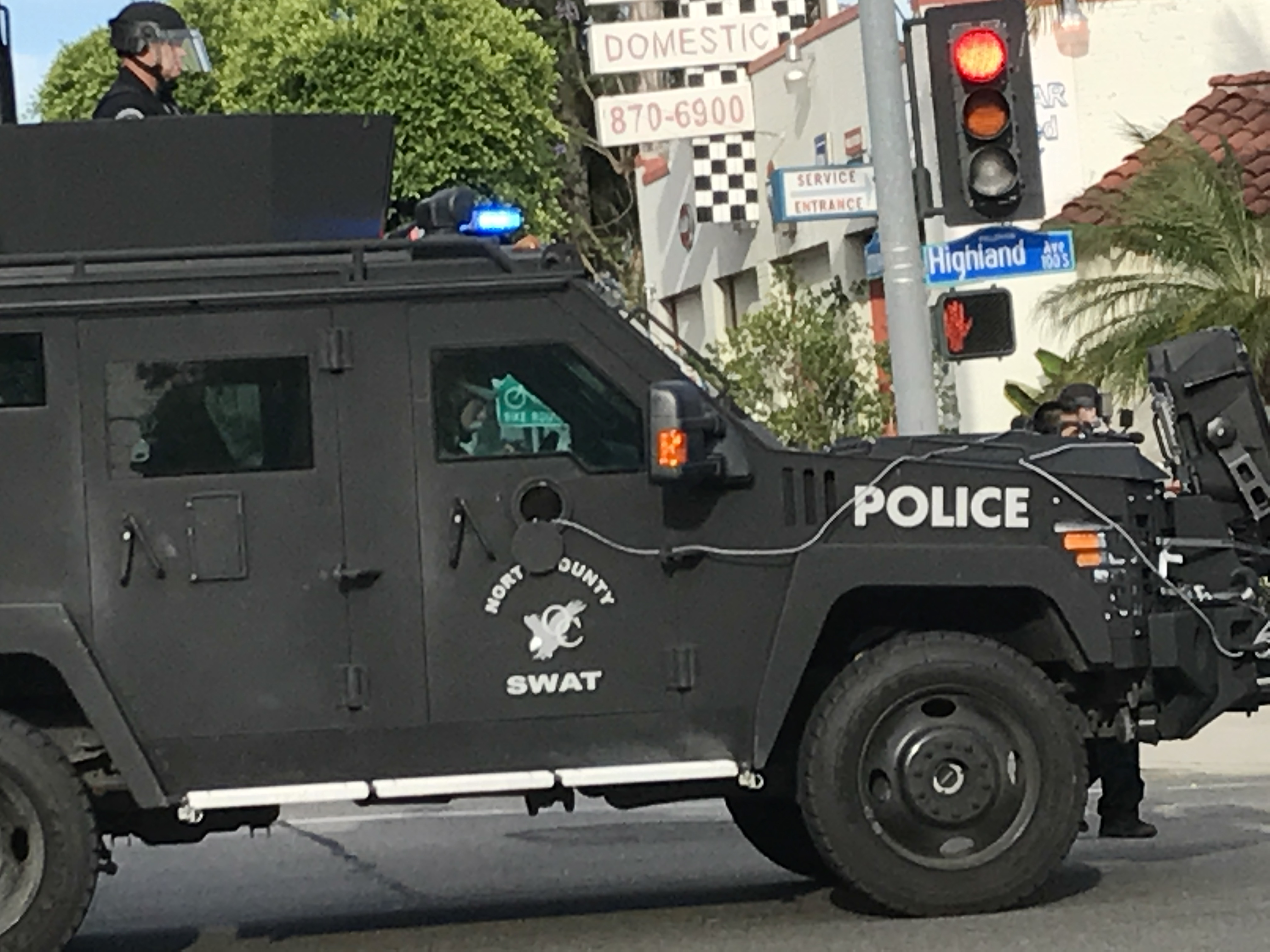 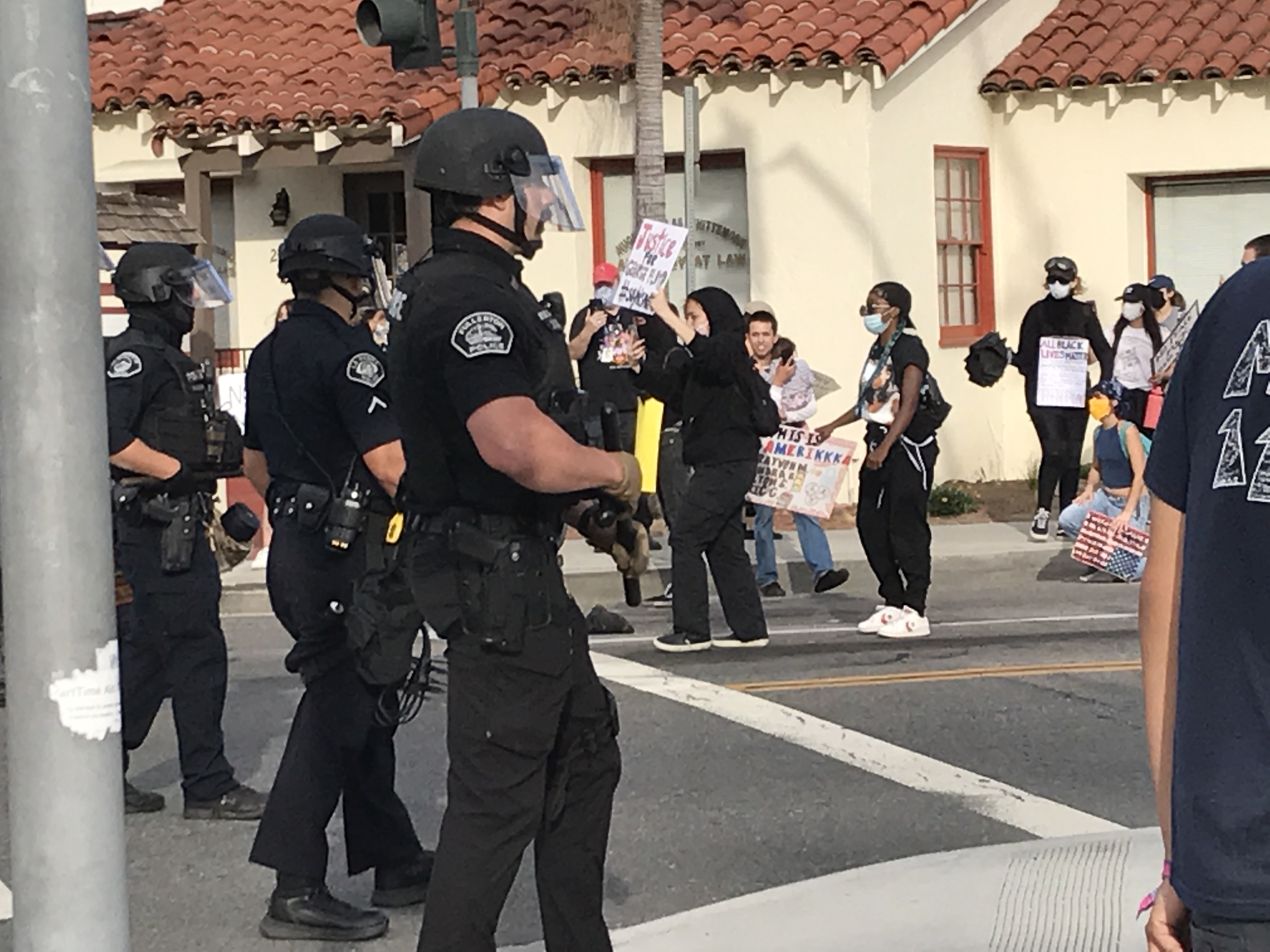 Two officers from the back flank ran forward of the SWAT vehicle to apprehend the passive protestor sitting in the street. 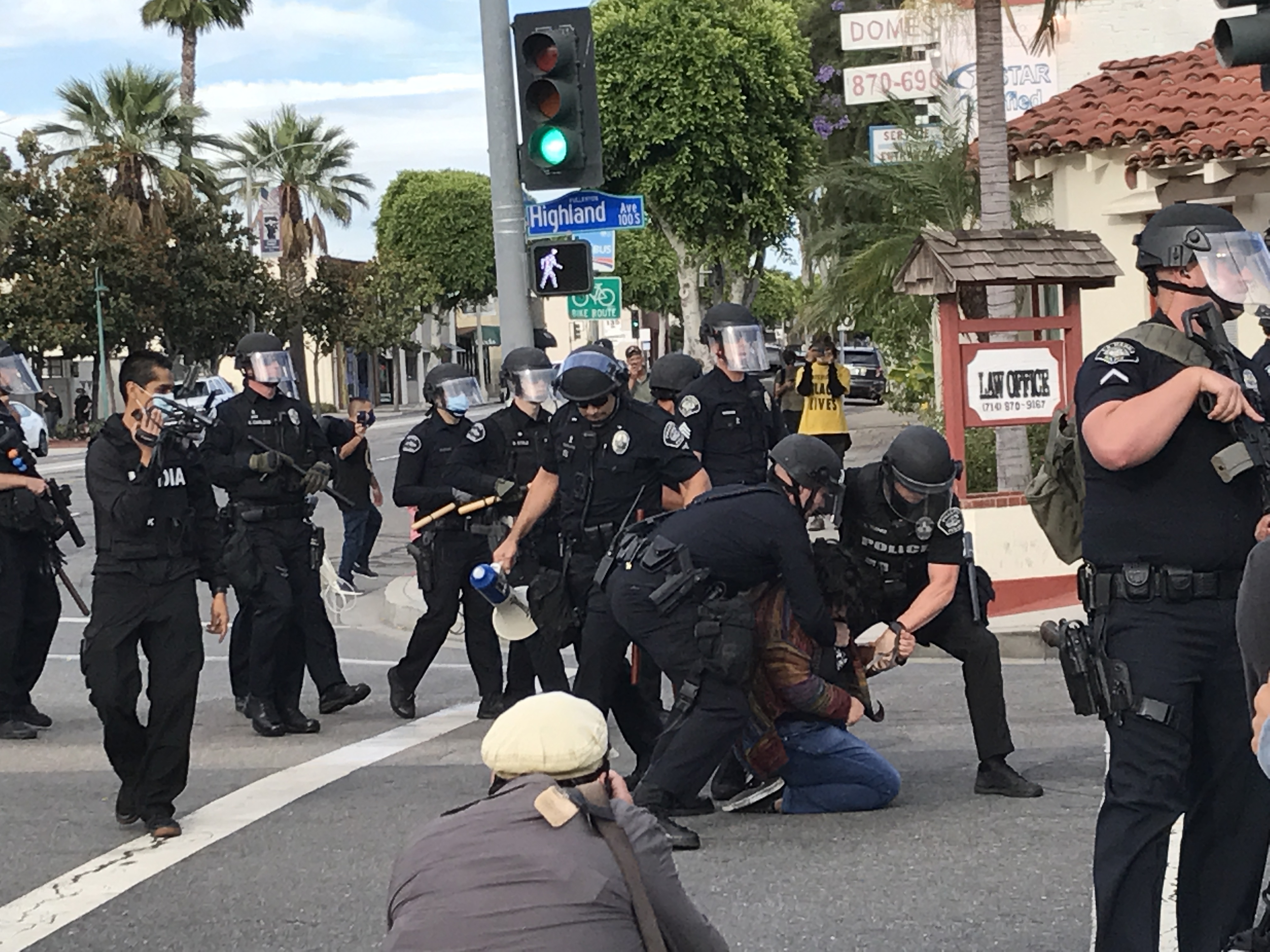 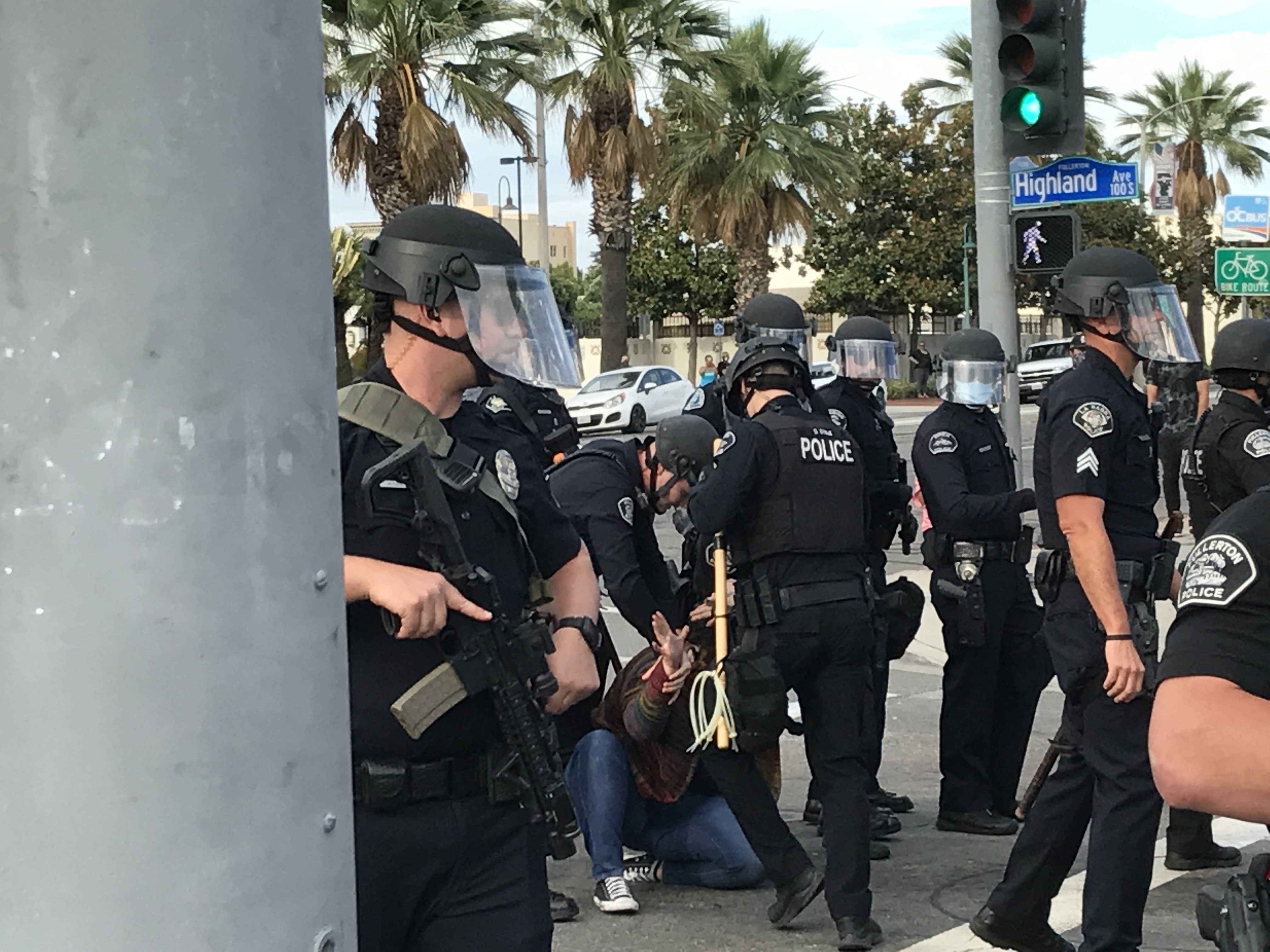 An officer joined in the fracas. They forced her face down on the pavement. One officer’s knee was on her right shoulder while another appeared to pull up on her left. 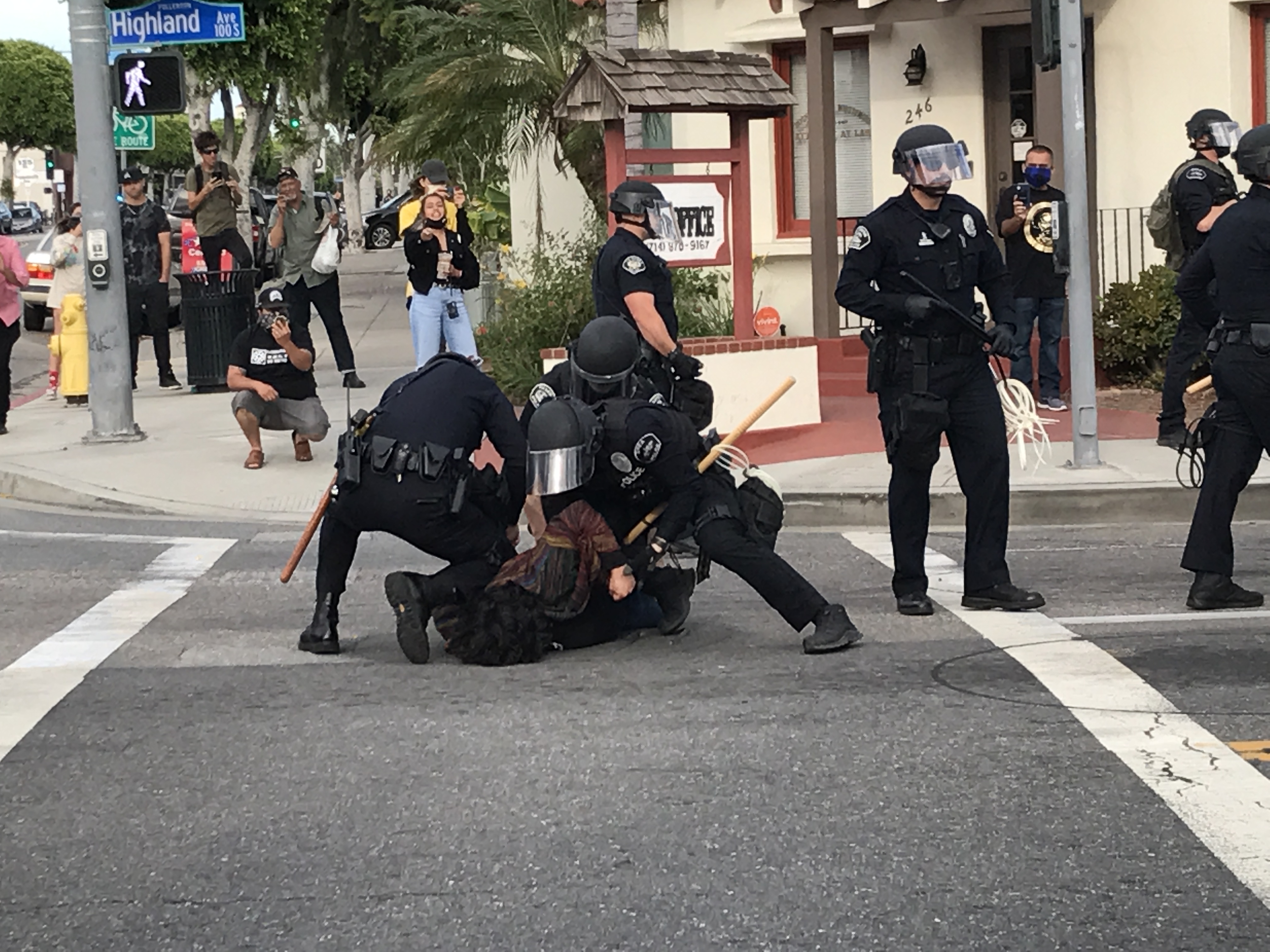 Officers kneel on protester in street 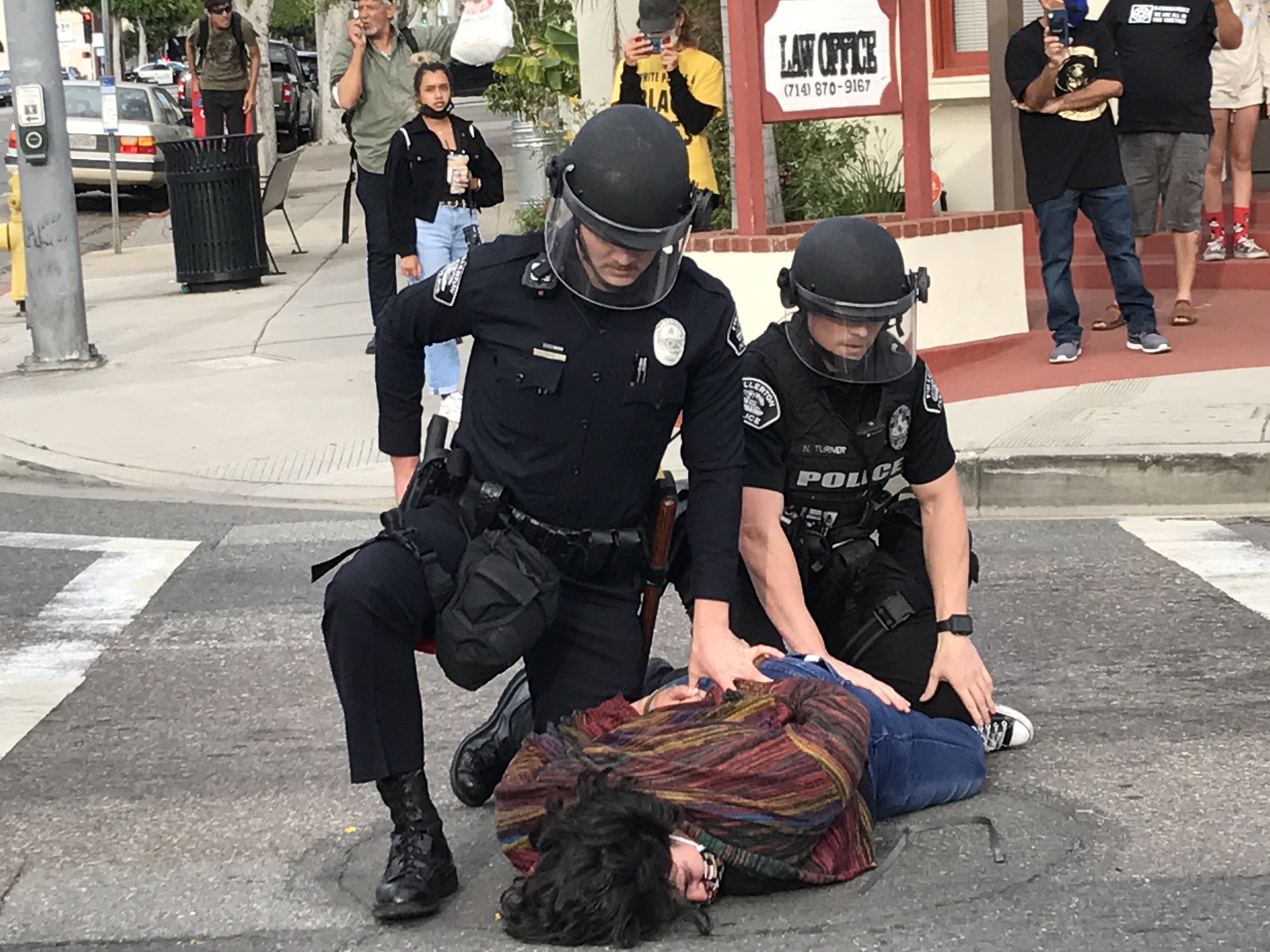 Protester bound and prostrate in street

She was walked to a police van and whisked away into the bowels of the police building. 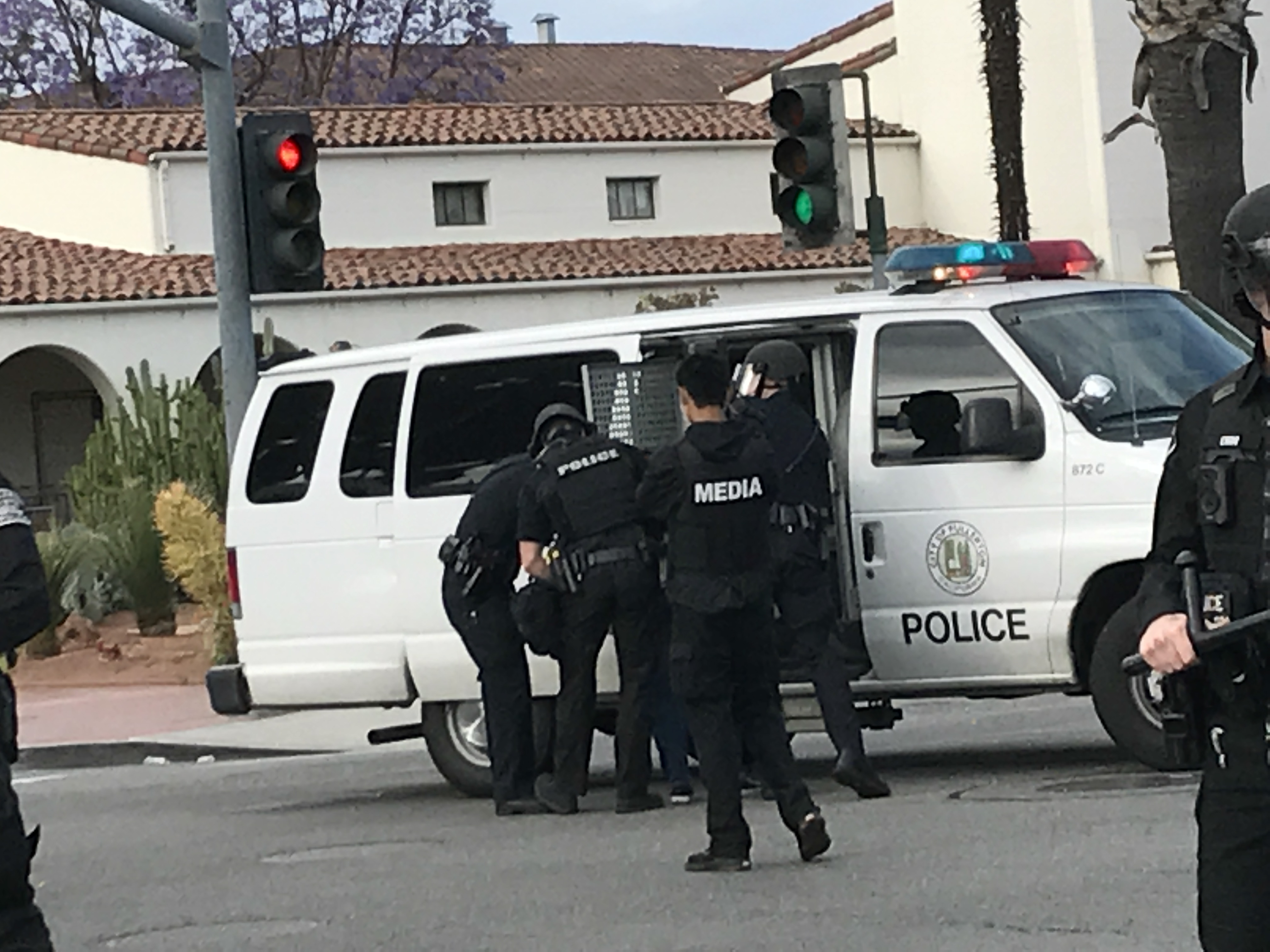 The police continued to advance, pushing the demonstrators down an alley. They emerged from the alley and onto the sidewalk and then walked east along Commonwealth back to Kelly’s Corner. 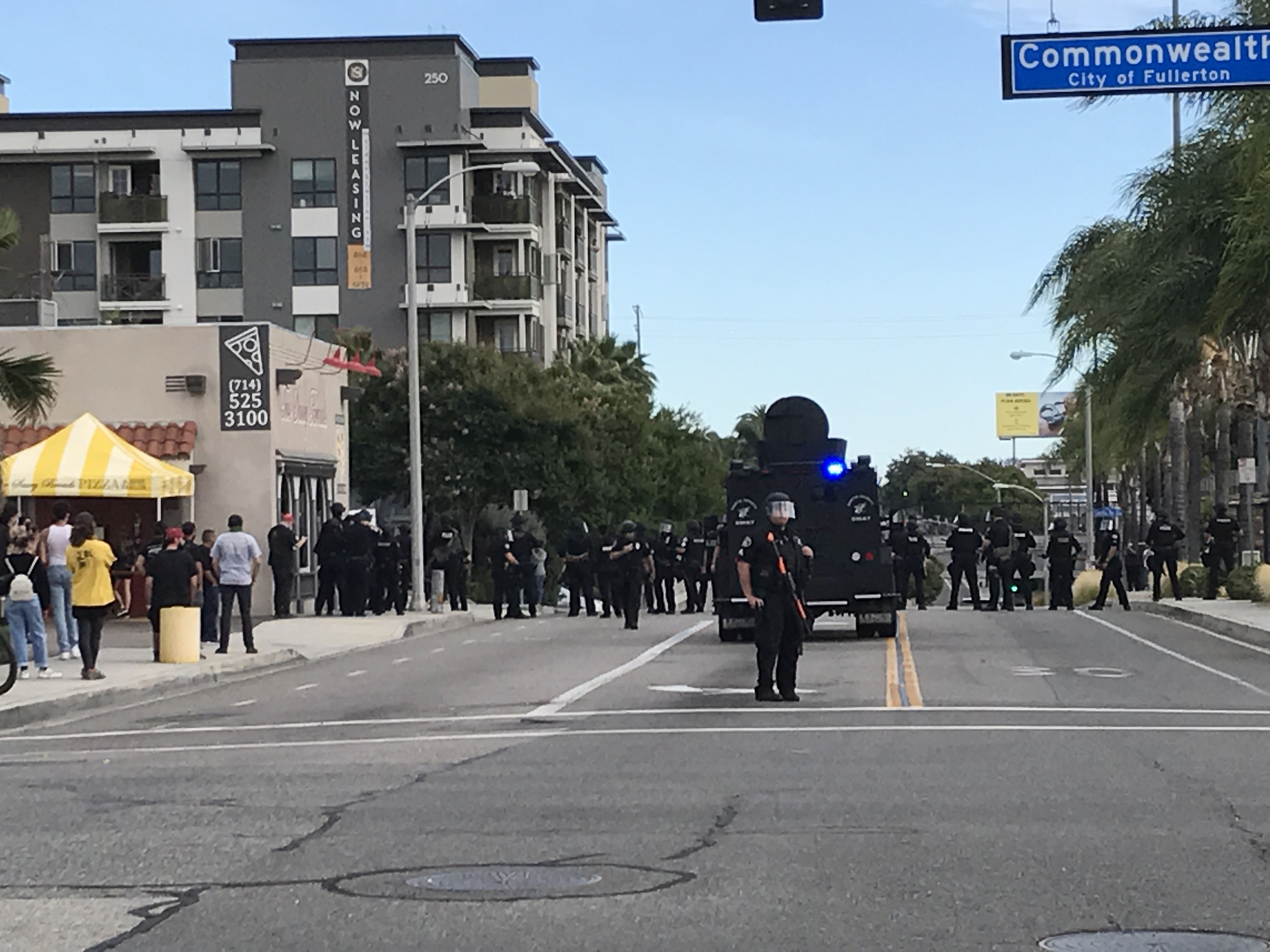