It is likely the Fullerton Museum Center will remain closed through at least the end of 2020.

At the Tuesday, June 2 meeting, Fullerton City Council voted 5-0 to adopt the 2020-21 budget. Included in this is a “temporary” cut of $305,493 in operating costs for the Fullerton Museum Center. This was part of a series of budget balancing measures adopted to help offset a $7.9 million deficit caused by revenue losses due to the COVID-19 pandemic. 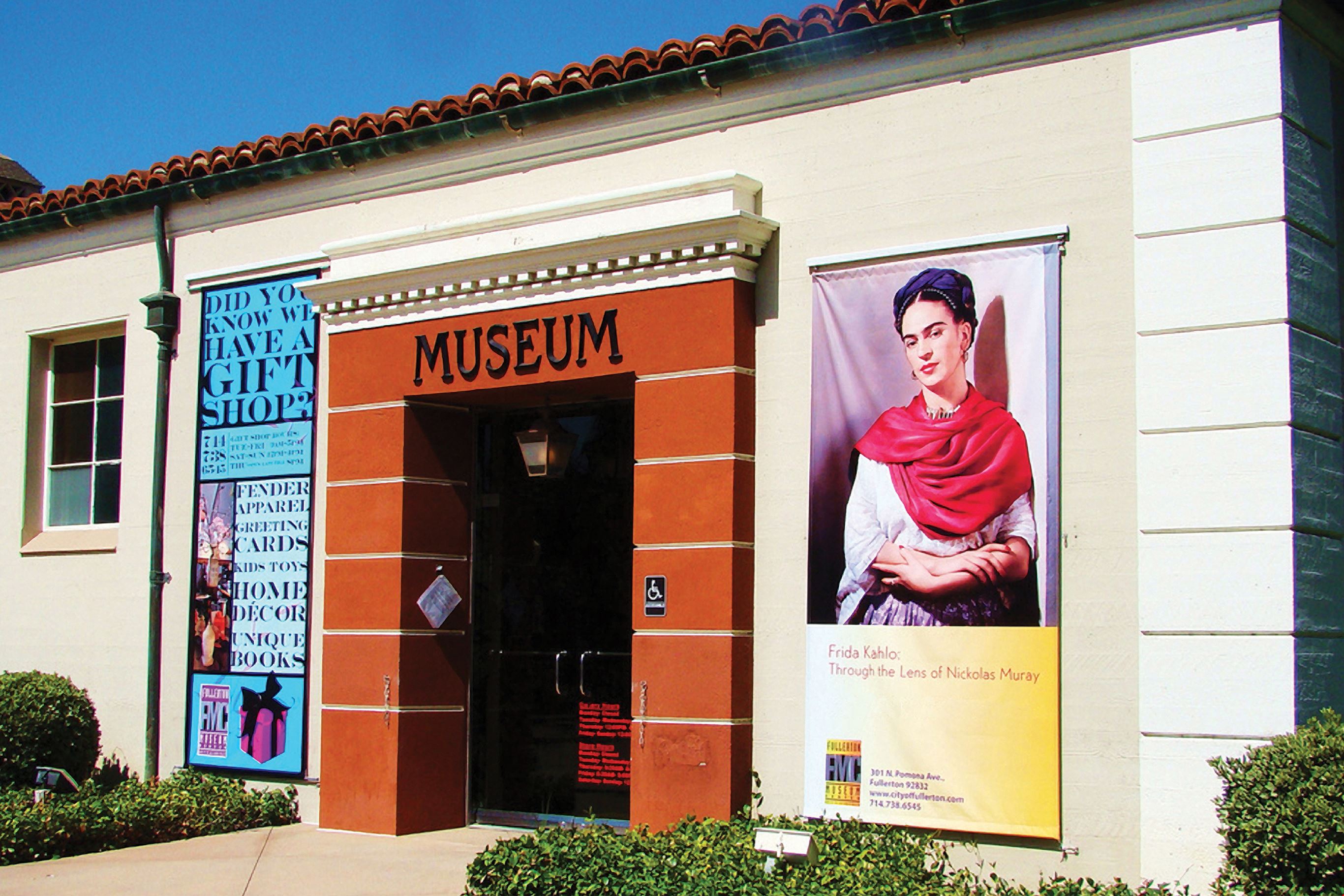 The original budget balancing proposal included also firing the Museum Center’s three full-time employees, though under a revised proposal these employees have been retained for now to work with the Parks and Recreation Department. All of the Museum’s part time employees were laid off in April.

According to City Manager Ken Domer, “All 3 [employees] will be retained during what I term a transition time as we review how to position the Museum to be more financially independent and sound going forward.”

City Treasurer Ellis Chang, who presented the budget, explained that these employees may be able to continue remote Museum programs such as kids art kits, “as well as support other Parks and Recreation activities as opportunities for re-opening summer recreation is allowed.”

Councilmember Jesus Silva asked if keeping the 3 staff members “will give us the flexibility to perhaps open the Museum on a limited basis as we move forward with this COVID-19 situation?” To which both Chang and Domer replied, “Correct.”

When asked whether the Museum would be able to re-open without program funding, FMC Board President Kirk San Roman said that, as things stand now, the Museum “is essentially shuttered until at least 2021.”

San Roman said that there is currently no set date to re-open the Museum. “For the sake of our members, for those who support the museum, I wish they would set a date, to give them some optimistic hope of when that would happen.”

San Roman said that the Museum’s normal fundraising activities, such as the Thursday Market, the Beer Garden, and Rotary Club event were all cancelled due to COVID-19. “Our fundraising opportunities at this time are very few unless we can find some grants, which we are pursuing.”

The Fullerton Museum Center is currently closed, as is required under Stage 2 of the Governor’s Pandemic Roadmap.

During public comments at the June 2 meeting, members of the community spoke in support of retaining the funding of the Museum Center.

Suzanne Benet said, “Not only do they produce fantastic quarterly exhibits, but they bring art, live performances, music, culture, and much needed diversity to our community. But probably the most important contribution the Museum gives our community is the opportunity to bring us all together. It allows strangers to become friends, and neighbors to become a community. If you end funding for the museum, you’ll be shutting down a beloved social and cultural hub of the downtown area.”

Benet suggested that Council consider postponing their decision “to allow the Museum members and the public in general to express how devastating this loss will be for the residents of Fullerton—This is too important an institution in our community to eliminate major funding without even sharing this conversation with all of your constituents.”

Fullerton resident Andrea Freeman said, “Our city is facing uncertainty. Let’s not let our uncertainty dictate making crucial decisions that will take away the most precious things in our community. This Museum has been part of the fabric of our community for over 40 years.”

Freeman read the mission statement of the FMC, which is “to present the best in diverse exhibitions and education programs. Our Center provides a vibrant central gathering place for the community, stimulates dialogue, and promotes critical and creative thinking.”

“When so many schools have cut funding for arts education, the Museum Center offers this to our community,” Freeman said.

Susie Dittmar, who is a member of Museum Center Board, said, “I’m going to give you one last pitch why we need to remain open or open to the public very soon.”

She said that cutting funding to the museum would mean cutting funding to children’s education, and discussed some of the education programs the Museum offers. For example, every year at least 7,000 Fullerton school children participate in FMC’s education program that includes a docent-led tour of the Museum’s exhibits, a critical thinking conversation, and a hands-on learning activity.

“We completely understand that cutting services is never simple, but what is deemed essential goes further than financial,” Dittmar said. “It is the hub of downtown. Keeping it open and operating will definitely guide normalcy and bring joy back to our citizens’ everyday lives.”

During Council discussion of the item, Mayor Protem Jan Flory said that keeping the 3 full time employees who are currently making the museum run, “gives me great confidence that we are going to have our Fullerton Museum Center funded after the first of the year.”

“It’s sad but where public works and public safety comprise 77% of our general fund, there isn’t much wiggle room,” Flory said. “And so when cuts have to be made, they are made in the discretionary services. That’s Parks and Rec, that’s the Library, that’s the Museum.” 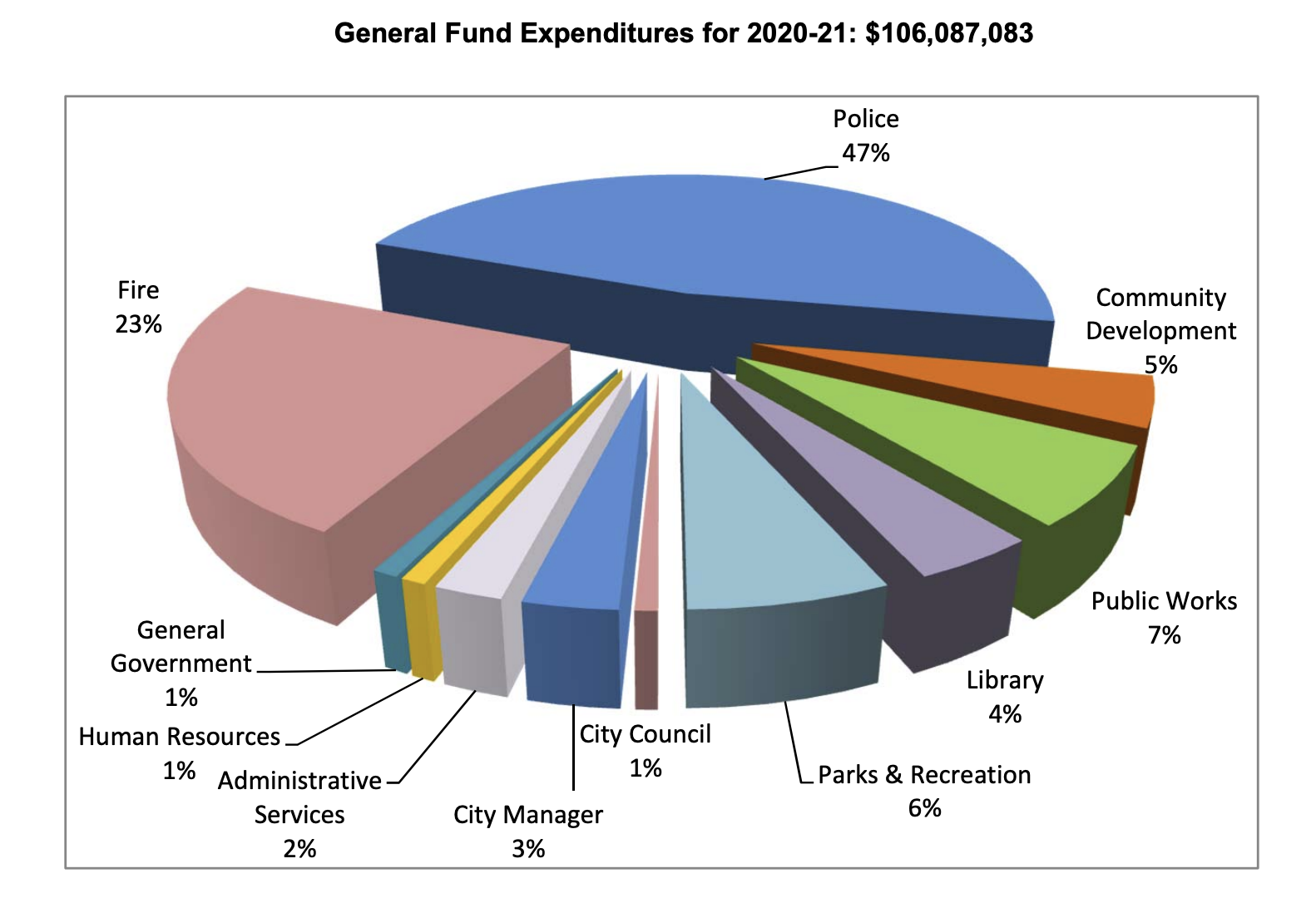 Pie chart of general fund expenditures for the 2020-21 budget.

Councilmember Ahmad Zahra said that in order to keep continuity, “I would be in favor of keeping the Museum at least partly open, maybe 1 or 2 days a week, so that the exhibits that have already been curated can be viewed, once the COVID-19 situation allows us to do that.”

“Instead of a closure, a scaling back,” Zahra said. He made a motion to give direction to City staff to “look into only partial opening of the Museum at the earliest convenience.” This motion passed 4-1 (Whitaker “no”), though it is only direction and not yet funded policy.

Zahra later told the Observer that because Council had to pass a budget this month by state law, “many factors remain variable with labor negotiations still underway and State and Federal COVID-19 relief funding still pending.” He said that this budget will be revised periodically throughout the course of the fiscal year “to restore some of the cuts that were made to our staffing levels, salaries, and community services, including our Museum.”

“As a staunch supporter of the arts, my hope is that we can find creative ways and work with community partners to keep the museum partially open until such time of a full recovery,” Zahra said.

In an Observer article posted on June 1, we reported that, while these cuts are being made to the Museum, the approved budget contains negotiated salary increases of $420,000 effective July 2020 for the Fullerton Police Officers’ Association Public Safety and Dispatcher Units (FPOA) and the Fullerton Firefighters’ Association (FFA) employees.

Zahra clarified that this is a contract that was negotiated last year and therefore legally must be honored.

City Manager Domer then said, “There is no item for a police raise or anything like that. Police raises are not part of this action and there’s actually nothing proposed at this time.”

Domer later clarified to the Observer that “Any personnel cost increases as part of the budget were already approved prior by the City Council. In trying to be as transparent as possible about increases in the personnel area we were highlighting those previously negotiated raises as part of the overall personnel increases…We also continue to work with the units to actually defer some of the $420k in increases and I am hopeful that one of the next actions we bring to the Council will be the deferral of about $181,000 until July 1, 2021 as a means to help us out through the next Fiscal Year.”

Regarding the Museum temporary closure, council member Jesus Silva said, “I know the majority of us would not dare shut it down completely, but these are tough times and we have to make tough decisions. But I’m confident that as we get back to somewhat normal, funding will increase and we’ll be able to go back and make whole some of these programs.”

Mayor Jennifer Fitzgerald, who made the motion to approve the budget, including the Museum cuts, said “None of us wants to shut down the Museum. We’re not going to turn the lock and not think about it again. The cuts to library hours and the museum closure are temporary and during that temporary time it will give us a chance, I hope, as a community to talk about how do these things operate and whether there are other ways that they can operate? Is there a way that the community can be more invested and more of an active partner in how those services are provided?”

Domer said, “It’s our intent to work with the Museum staff, and it was my commitment to the Museum Association that we don’t want to close it down. But we cannot afford the $550,000 City subsidy of the museum right now, so we’ve got to look at doing things differently.”

He said that the City is applying for a CARES Act grant for the museum.

The Fullerton Museum Center, housed in a historic WPA building in downtown Fullerton, is home to the Leo Fender Gallery and has provided the city of Fullerton with decades of art exhibits, children’s art programs, as well as being the hub for the popular Fullerton Market, Art Walk, and many other community events.