Recognizing the History Behind the Bernal House

I recently learned that, earlier this year, before the stay-at-home order, Fullerton City Councilmember Jesus Silva was thinking of giving historical recognition to the Bernal house. I wanted to find out more about the history behind the Bernal house, so I decided to research an interesting and important anti-discrimination case involving Mr. Bernal from 1943, known as Doss v. Bernal. “It was one of the leading cases the Supreme Court used to outlaw racial covenants,” Councilman Silva said over the phone. 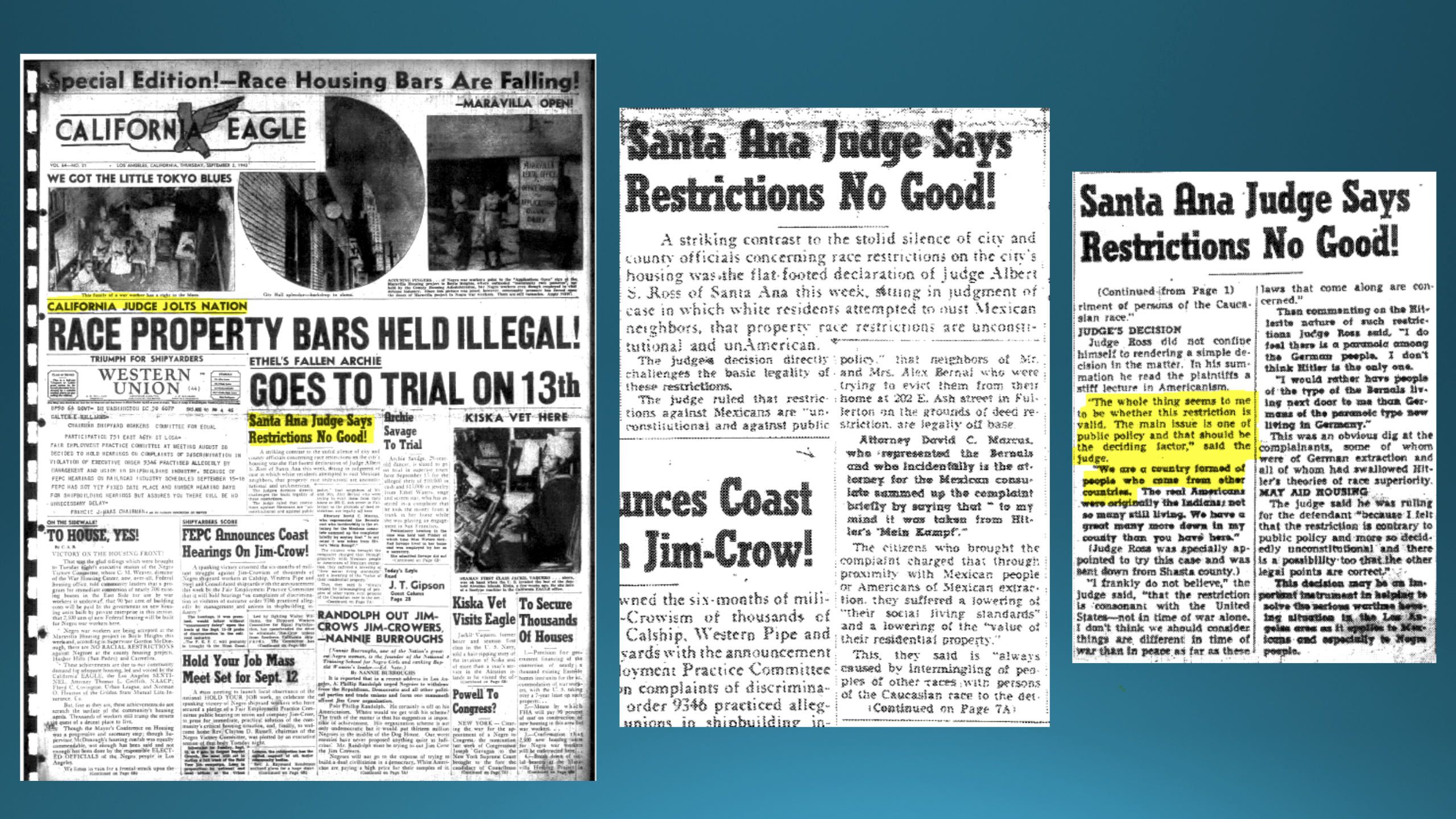 Pages from a 1943 issue of the California Eagle regarding the Bernal case.

Fullerton hasn’t always been a welcoming place. In fact, according to old Fullerton planning commission minutes, back in 1915, residents insisted that the city’s police department block Mexicans from leaving their houses after an outbreak of scarlet fever. Four years later, hundreds of residents protested at a city council meeting after they learned that the Santa Fe Railroad planned to build housing for its Mexican workers near the company’s tracks.

Alejandro Bernal, whose mother was from the Mexican state of Aguascalientes and whose father was from Arizona with Spanish heritage, moved to Fullerton with his family. At the time, it wasn’t easy for Mexican children to get the education they deserved. According to “Mi Casa es Mi Casa,” a 2010 OC Weekly article written by Gustavo Arellano, “in those days, Mexican children were actively discouraged from attending school by white teachers and administrators.” Bernal did not benefit from this system. He went to St. Mary’s Catholic Church’s elementary school for several years, but never advanced past that. This eventually led him to work in the fields while a teenager, which in turn allowed him to save up enough money to purchase a truck that led him to become a produce truck driver.

After reading a UCLA Chicano Studies Research Center report by Robert Chao Romero and Luis Fernando Fernandez, titled, “Doss V. Bernal: Ending Mexican Apartheid in Orange County,” I learned that until 1937, Bernal lived in a segregated section of Fullerton called the Truslow Barrio. He married Mexican national Esther Munoz De Anda, and together, they had two children, Irene and Maria Teresa. At first, the family lived in an apartment in La Habra.

But in 1943, according to OC Human Relations, “Alejandro Bernal and his family moved to a house on Ash Avenue in the Sunnyside neighborhood of Fullerton.” The Sunnyside Addition was established in 1923 and by the time the Bernals moved in, it had become a predominantly lower middle class community occupied exclusively by whites. Interestingly, the white stucco home at East Ash where they had moved just happened to be a street away from the segregated neighborhood where Mr. Bernal was raised. 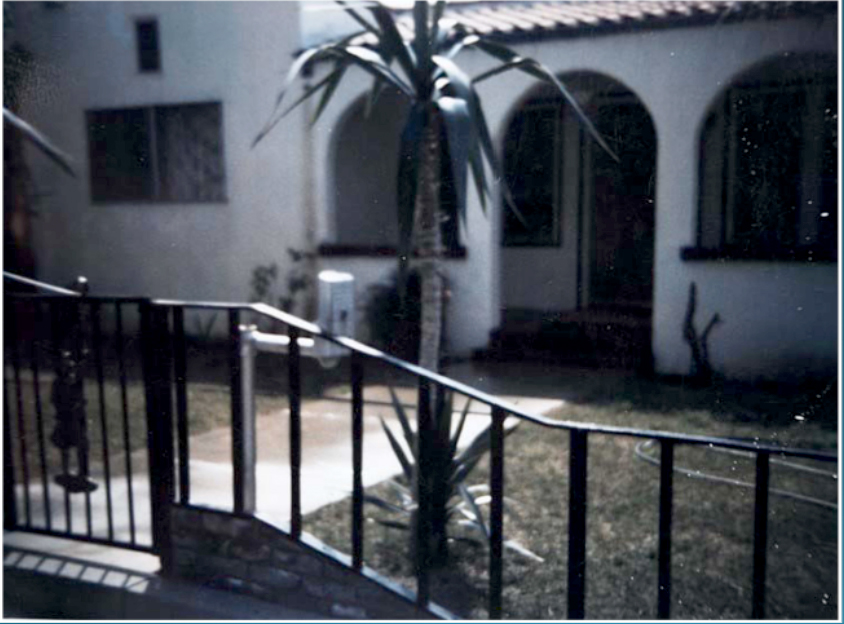 The owners of the property, Joe and Velda Johnson, agreed to sell for $4,250, and the Bernals secured a mortgage for the home from the First National Trust Bank of Fullerton. According to Gustavo Arellano in the OC Weekly, the bankers thought Esther Bernal “was the new homeowner’s maid, so they didn’t think twice of selling it.” However, three days after the Bernals moved in, the former owners told them that they “might have a little trouble” because of a deed restriction that was attached to the house. The restriction said that “no portion of the said property shall at any time be used, leased, owned, or occupied by any Mexicans or persons other than of the Caucasian race.”

The Bernal’s neighbors in this predominantly white community feared that the presence of Mexicans in their neighborhood would lower their property values. Failing to prevent the Bernals from moving in, the white residents of the community hired a lawyer to file an injunction against the family, requesting their removal from the house. According to OC Human Relations, “they were relying on a clause written into the deeds of lots for sale in Fullerton neighborhoods that supported residential segregation in housing covenants.”

Barely a month later, the Bernals received a summons from an Orange County sheriff’s deputy to appear in Orange County Superior Court. The lawsuit was filed “on behalf of a majority of all the other lot owners” of the Sunnyside Addition and it requested judicial enforcement of the racial restriction, while also asking that the court ban the Bernals from living in their own home.

The Bernals refused to leave, and refused to give up without defending their rights, instead hiring Los Angeles attorney David C. Marcus, who would later serve as lead counsel in the well-known 1946 Mendez v. Westminster case, which ended the educational segregation of Mexican youth. In Doss et al v. Bernal et al, Marcus was able to successfully make a legal argument that argued that Mexicans were subject to the equal protection clause of the 14th Amendment of the United States Constitution. He also argued that housing covenants violated both the 14th Amendment and the due-process clause of the Fifth Amendment. The court case lasted for four days in August of 1943 and ended when Judge Albert A. Ross of the OC Superior Court made a decision that ensured the Bernals’ right to keep their home.

The case didn’t officially end until a few months later. On September 20th, Guss Hagenstein, the lawyer hired by the white neighbors of the Sunnyside Addition, filed a motion objecting to Judge Ross’ ruling. Hagenstein argued that the 14th Amendment didn’t apply to the Bernals, as they were Mexican. A few weeks after that, Hagenstein filed a different motion “seeking to vacate Ross’ decision.” He cited case precedents in his argument for the housing covenants. However, the judge was not persuaded and issued a final ruling on November 15th, 1943, where he wrote that he was concerned Hagenstein’s argument went against the philosophy “of the United States and of the state of California to enforce a restriction on occupancy based solely on nationality of the persons against whom the restrictions are sought. This is especially true when the nationality affected is that of a friendly neighbor and when one particular nationality is named.”

In Orange County, the headlines from local newspapers were dramatic: “Race Housing Bars are Falling!”; “Santa Ana Judge Says Restrictions No Good!”; “Mexican Land Rights Upheld.” Nationally, the ruling in favor of the Bernals was more positively received. In fact, the September 6th, 1943 edition of Time magazine included an article on the decision, titled “California-Across the Tracks,” which discussed the court case and how Alex Bernal literally and successfully “moved across the [train] tracks to stay.” Some of the greatest support came in the form of letters the Bernals received from people across the United States. According to the OC Weekly, most of the letters came from military personnel. One read, “If enough cases such as yours are brought to light for all America to ponder, racial prejudice in time may reach the vanishing point.” Another read, “Please be sure that unthinking prejudice does not prevail anywhere. Ambition and personal worth must always have a place in America, or our country will decay.”

However, it seems as though the fight against the lawsuit took a toll on the Bernal family. Even though he persevered with courage and ultimately won his court case, Mr. Bernal didn’t discuss it very often. He kept the Time magazine article, the letters he received and all other documents and photographs related to the case buried away in a box in his garage, which wasn’t discovered by his family until after his death in 1999.

The importance of the 1943 anti-discrimination case is what convinced Councilman Silva to recognize the historical significance of the Bernal house. “I learned about it in the spring of the 2017-2018 school year,” said Silva. “One of his grandkids was a student of mine in the spring. She was in the classroom and mentioned that Bernal was her grandfather.”

Councilman Silva is currently in the early stages of the process to recognize the house. He was planning to bring up this idea with the Fullerton City Council at the end of May and work with Fullerton Heritage to maybe put up a plaque and work with the current owners of the house. He still hopes to work on making sure the house is recognized for its important role in fighting against race-based residential segregation.

I hope that this look back at local history will empower us to own our past and use it as a source of inspiration to continue the struggle to make this a country where everyone lives free from violence and discrimination. Even though other cases, such as the Sugar Hill case and Shelley v. Kraemer, may have received more attention, it’s important to remember Doss v. Bernal was the first case to hold that racially restrictive covenants violated equal protection.

To see my video containing historical photographs and documents from Doss v. Bernal, visit http://www.fullertonobserver.com and click the tab labeled “Local.” Underneath that tab, click on “Emerson Little YouTube Channel,” which will take you directly to my page.