Fullerton City Council voted 5-0 to approve the 2020/21 budget at their June 2 meeting.

“Based on our funding ability and our employee count, we are at a lower level [of service],” City Manager Ken Domer said. “Given the COVID situation we’re basically looking at a lower level of service for our parks, medians landscaping areas, and city hall. That’s the reality of it right now.”

The total city budget, including grants and the Capital Improvement Program is $240 million.

The General Fund budget is $106 million in expenditures, supported by revenues (taxes, fees, etc.) of $98 million, and $7.9 million in “budget reduction measures.”

These include Vacancy Savings (hiring freeze), Temporary Closure of the Museum, Reducing the Library’s Hours open to the public from 61 to 34 Hours, negotiated “labor savings,” and executive team salary reduction of 10%. 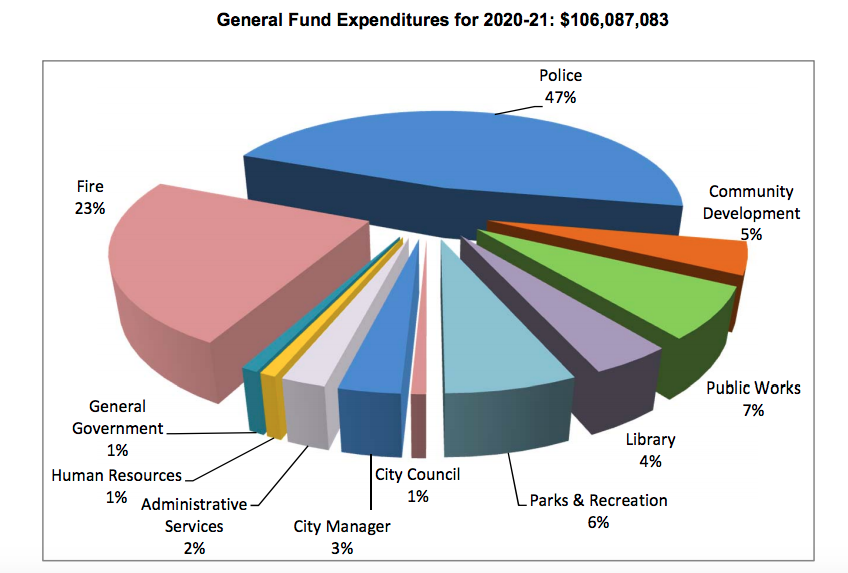 And here’s a breakdown of where general fund revenue comes from: 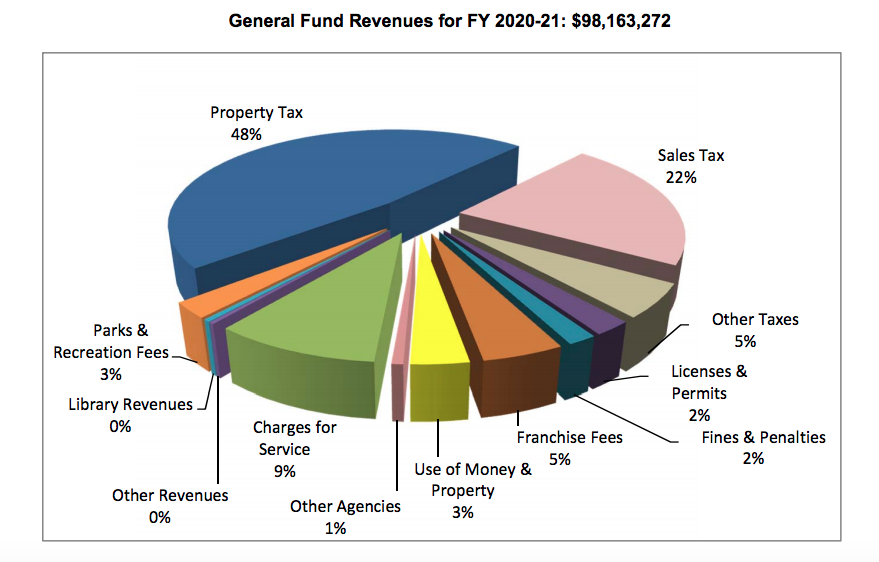 It should be noted that while other departments are being cut, the police department is seeing a budget increase, including some previously-negotiated pay raises.

According to a staff report, “The City’s fiscal issues existed prior to the national pandemic. The loss of revenue due to the health crisis highlights that service and programming levels the City has historically provided is no longer sustainable, even in a post-COVID era…As we now live in a new reality and way of doing business as a result of COVID-19, and as the national and local climate continue to change throughout the year, it is likely Staff will bring forth amended budget projections and corresponding budget adjustments regularly as needed and through its quarterly Financial Updates during the new fiscal year.”

After a presentation of the budget by city treasurer Ellis Chang, council members gave their thoughts.

A major point of discussion was the temporary closure of the Fullerton Museum Center, which we reported on HERE.

“It’s sad but where public works and public safety comprise 77% of our general fund, there isn’t much wiggle room,” Mayor Pro tem Jan Flory said. “And so when cuts have to be made they are made in the discretionary services. That’s parks and rec, that’s the library, that’s the museum.”

Councilmember Bruce Whitaker asked about a 23% increase in charges for services. Staff said that the primary reason for the increase is in our water fees.

Fiscal year 20/21 includes a 14% water rate increase that was approved last year, which translates on paper to about a $10 million increase.

“That’s largely what is eating into what would be reserves,” Whitaker said. “In an era where our revenues are increasing 1 or 2%, to have a 16 or 17% jump in a core cost is what also is contributing to the difficulties that we’re having in trying to get this budget to balance.”

“I know this is a living document in a way,” Councilmember Ahmad Zahra said. “It’s going to come back in many forms. I hope that as funds come in, and I know there will be some funds coming in, that we prioritize our services, especially our public works, our salaries, our employees.”

Councilmember Jesus Silva said, “As a schoolteacher, our district is going through some of the same scenarios of budget cuts and how to balance the budget.”

Mayor Jennifer Fitzgerald made the motion to approve the budget, which Council unanimously supported.

“When the City Manager says we have to go to a level ‘C’ of service, none of us is going to like that,” Fitzgerald said. “And so how can we all pitch in to keep our community beautiful like we want to? We simply don’t have the money to do that right now. None of us will rest as we try to figure out how to operate this City in this new paradigm. We’re all hoping, as all of you are, that the economy gets back running as quickly as possible, and that our situation brightens here. But we do have to make some hard decisions now.”

To read the City budget and supporting documents click HERE.