The county of Orange announced on Monday, June 8 that Dr. Nichole Quick had unexpectedly resigned her position as County Health Officer. A prominent figure in the County’s strategic efforts to combat the spread of COVID-19, Dr. Quick had faced pressure from the County’s Board of Supervisors (BOS), most prominently from Chair Michelle Steel and 3rd District Supervisor Don Wagner, to relax a face-covering order put into place just prior to the County’s partial reopening two weeks ago. The order was seen as one measure intended to help reduce the spread of the virus as County residents came into closer contact with one another when some businesses were given permission by the state of California to reopen.

Because Dr. Quick’s position derived its authority directly from the state of California, the BOS lacked the statuary power to modify or eliminate the order. OC Sheriff Don Barnes had announced earlier that his department would not enforce the order, further undercutting its effectiveness.

Members of the BOS like Wagner stridently complained to the media about the mandatory nature of the order, sometimes not pointing out that it was put in place to mitigate the possible dangers of reopening. He and other Supervisors found ready allies in County residents who insisted during the public speaking portion of the BOS meetings that they had the right not to wear a face covering meant to keep them from spreading the sometimes deadly disease to others. One speaker threatened Dr. Quick, and a group of people eventually protested outside of her home. During the Board’s latest meeting, Vice Chair Andrew Do, who represents the 1st District, attempted to mollify people shouting from the audience by saying he was “trying to make their case for them.”

Fullerton, like some other OC cities, had already adopted their own rules requiring customers in businesses as well as workers who come in to contact with them to wear face coverings.

According to County CEO Frank Kim, he and Dr. Quick conversed on Saturday, June 6 about anticipated questions from the BOS, but her resignation two days later took him by surprise. Dr. Quick is the third high-ranking member of the County Health Care Agency to leave during the pandemic. Dr. Clayton Chau, who was only hired last month to fill the vacant Health Care Director position, was hastily appointed Acting Health Officer by the BOS two days after Dr. Quick’s resignation. The dual positions now held by Dr. Chau could be seen as potentially coming into conflict with one another as each draws its authority from different levels of government.

Just two days later, Dr. Chau announced that the face-covering order issued by Dr. Quick had been downgraded to one that no longer required, but still strongly recommended, the wearing of them to help stop the spread of the virus. He cited the need to be consistent with State standards as a reason for the change, and explained that in the prior two days he had had more time to examine State criteria. According to a press release from the County, “The County Health Officer’s previous Order requiring most residents to wear cloth face coverings outside their home when unable to physically distance themselves by at least six feet can now be safely modified to a strong SHOULD instead of a MUST.”

In the same press release Dr. Chau wrote, “This change ensures the OC Health Care Agency is acting consistently with our partners at the California Department of Public Health and is based on Orange County’s measures against State-mandated COVID-19 metrics. That said, I stand with Public Health experts and believe strongly that face-coverings help slow the spread of COVID-19 and save lives.”

Fourth District Supervisor Doug Chaffee (Fullerton) appeared to easily accept the amended order, saying of Dr. Quick that she “stood by her conservative opinion and took a lot of abuse for it,” but then questioned the efficacy of the mandate she issued given that no one was enforcing it.

Coming less than a week prior to a further move toward opening the County’s economy, Dr. Quick’s sudden departure gave the impression that she was perhaps unwilling to relax the face-covering mandate as the State allows for bars, restaurants, gyms, and public swimming pools to open, even as the numbers of infections, deaths, and hospitalizations continue to rise in the County. Chair Steel continues to emphasize that Orange County’s COVID-19 rates are low compared to neighboring counties, and claimed during a June 11 briefing that the County was on its way out of the pandemic. This despite a recent uptick in numbers that Dr. Chau associated directly with Memorial Day weekend crowds.

Answering questions posed by reporters during a June 11 update, BOS Chair Michelle Steel announced that she had sent a letter to Gov. Newsom requesting permission for Orange County to move into Stage 3 of the reopening process. BOS Vice Chair Do, Dr. Chau, and CEO Kim all emphasized that if the rate of infections begins to spike, the County would work on a remediation plan with the State that could, at the extreme, require another shut down. Dr. Chau even characterized another mandatory face-covering order as a measure to have at the ready should it be necessary.

The County’s COVID-19 website, www.ochealthinfo.com/novelcoronavirus, posts daily updates to numbers of infections, deaths, and hospitalizations. Daily hospitalization rates have steadily risen since the late April inception of the web statistics. The most recent figure available is 291 countywide, but the County relies on voluntary reporting by hospitals, and continually explains that daily counts depend on the number reporting that day as well as the time of day reports are made. The County used to show the number of reporting hospitals, but no longer does. The state of California’s own website shows the higher number of 325 for the same day. The County does not divulge hospitalizations or deaths by city, but a State website displays a graphic that represents clusters of hospitalizations by locations that correspond to the locations of hospitals. A cluster seeming to correspond with the location of Fullerton’s St. Jude shows 15 patients, as seen below: 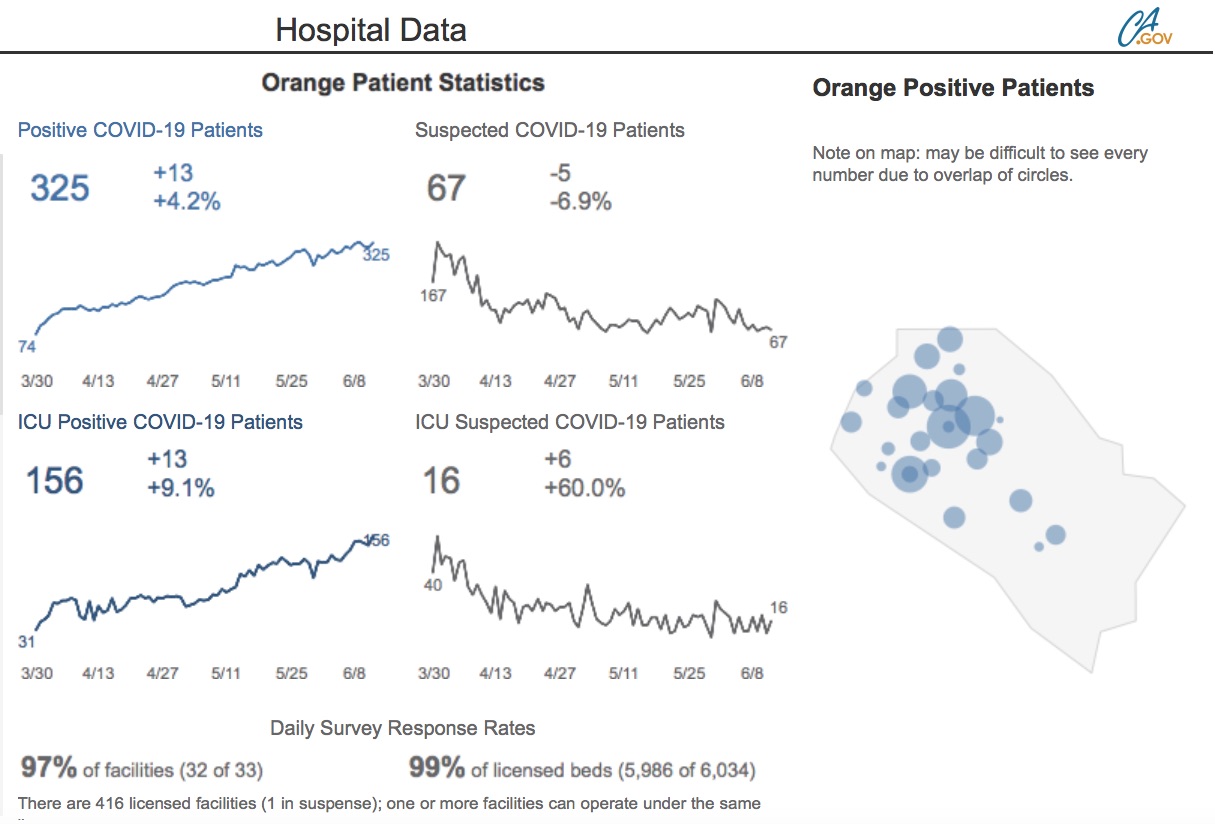 The County does not list deaths by city, although CEO Kim stated that mayors have been asking for that data. On June 6, however, the Huntington Beach news site Surf City Voice published a count of COVID-19 deaths by city. According to those figures, Fullerton has so far recorded 8 deaths from the virus. Citing privacy concerns, the HCA had previously resisted publishing city-by-city death rates, but promises to do so soon on a revamped County website. The new site will also separate out infections occurring in congregate living situations such as skilled nursing facilities, so those statistics do not “muddy the waters,” in Dr. Chau’s words. County officials take pains to point out that vulnerable populations, such as the elderly and medically compromised, who live in these facilities skew the County’s overall numbers upward when they contract and die from the virus.

As rates of COVID-19 infections, hospitalizations, and deaths steadily rise, County officials are relaxing restrictions, effective June 12, on some private and public sector operations, including, according to the County press release cited above, movie theaters and family entertainment centers, restaurants, wineries and bars, zoos and museums, gyms and fitness centers, hotels (for tourism and individual travel), card rooms and racetracks, and public and HOA swimming pools. The city of Fullerton has not yet announced what public facilities, if any, it plans to reopen. On June 10, the County Clerk Recorder resumed in-person service for marriage licenses, death certificates, and other transactions.