Family members of a Fullerton man shot to death by police in May are considering filing a wrongful death lawsuit against the City. A Fullerton police officer fired 2 shots into Hector Hernandez, 34, killing him in front of his residence on the 3600 block of West Ave. on May 27 at approximately 10:13 p.m.

Relatives had earlier called 911, reporting that an intoxicated Hernandez was involved in a physical altercation with his stepsons in his home before firing a gun. Police later reported that “it was relayed” that Hernandez had assaulted his girlfriend on the way home from a family party before and when they arrived at home. Later confronted by Fullerton police officers, Hernandez stabbed a police dog while trying to fend it off before being fatally shot by the dog’s FPD K9 officer/handler. 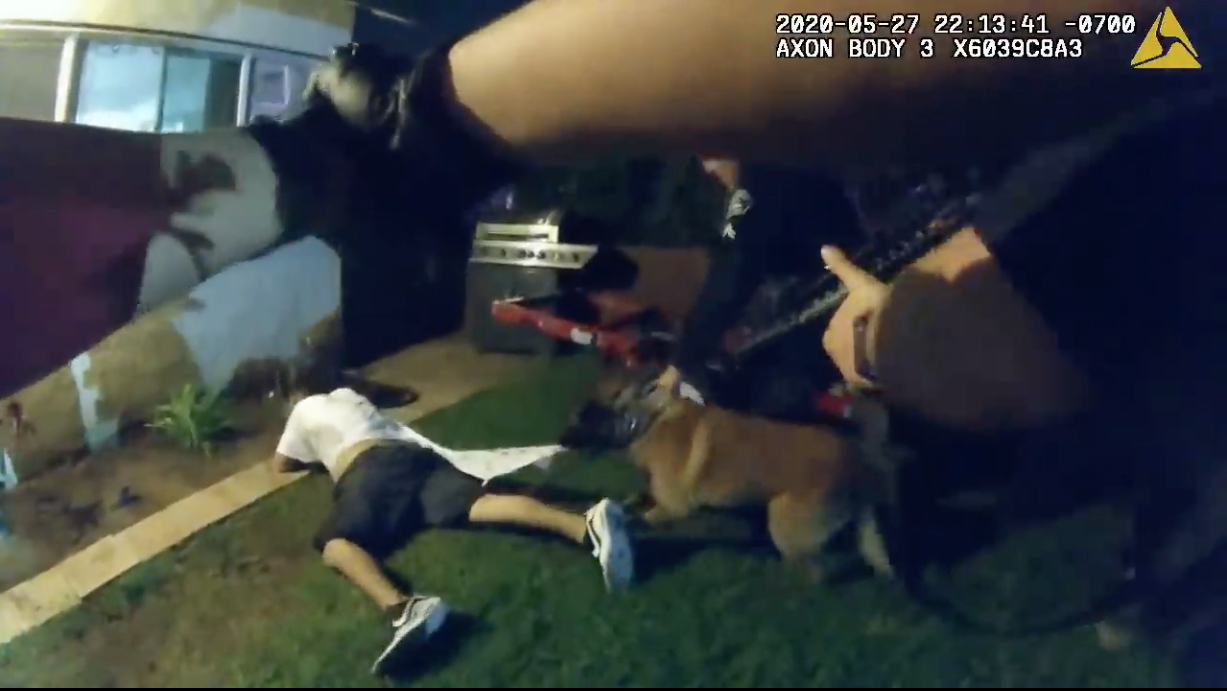 Bodycam footage from the police shooting of Hector Hernandez.

It was the second fatal shooting by Fullerton police officers that month.

The family is represented by the law firm of Garo Mardirossian and Associates, who also represented the father of Kelly Thomas, who was beaten until brain dead by Fullerton police in 2011, and other clients with complaints against law enforcement officers. The Los Angeles-based attorney contends that Hernandez was trying to comply with police commands at the time of his killing and did not represent a threat to anyone.

Fullerton police initially released a minimum of information about the shooting, citing an investigation by the office of Orange County’s District Attorney, which is standard in such cases. The FPD press release in May included an image of a foldable knife recovered at the scene, but not the gun Hernandez is alleged to have fired. According to Mardirossian, Hernandez carried the knife during his normal course of work in a U-Haul warehouse. Police later released an image of a handgun reported to have been recovered from the scene.

A month after the shooting, the Fullerton Police Department released a Critical Incident Community video, which can be found on Youtube (HERE). Introduced and narrated by Chief Robert Dunn and Lt. Jon Radus, the Critical Incident video follows a standard format instituted by the department to comply with state law requiring the release of video and audio of police involved shootings. The video presents audio of 911 calls as well as video and audio from body cameras worn by officers.

Mardirossian has complained that the department has only released some of the video, although they are required by law to release all of it no later than 45 days after the date of the incident. He first contacted Fullerton police on July 14 after the 45-day period expired, requesting all video and audio, but was told the next day by police that the department needed more time to redact files for privacy reasons. By July 28, FPD, according to Public Information Officer Sgt. Eric Bridges, was “working with our City Attorney’s Office to respond to that request as quickly as possible.”

Fullerton police declined to comment on the possible lawsuit and referred questions about the shooting to the office of the OC District Attorney. A neighbor of Hernandez, Bob Brown, said investigators from the D.A. visited his house during the second week of July.

The family is also requesting the official autopsy report from the County coroner because they want to know the location of the entrance wounds from the gunshots that killed Hernandez as he lay on his driveway.

Mardirossian described Hector Hernandez as a man loved by his neighbors, employers, and co-workers. He said that the “neighborhood was very, very upset” by the killing. Six neighbors spoke during the open public comments period of the meeting of the Fullerton City Council on July 21. Bob Brown said he knew Hernandez for 18 years, and described him as someone who would “give you his last dollar if you needed it.” He later claimed that it was Hernandez who was assaulted by the stepsons when he returned from a party, and Hernandez brandished a knife to drive them out of the house.

Brown said at the council meeting that he witnessed the shooting from no more than 40 feet away. He criticized the police for exhibiting “no leadership or coordination on the scene that night,” and questioned why the K9 officer deployed his dog to attack when Hernandez had his arms in the air, as police had commanded him to do.

In the FPD Critical Incident video, which has been viewed over 5,200 times on Youtube, Hector Hernandez can indeed be seen with his hands raised before the veteran police dog, Rotar, is released. His hands stay in the air until the dog approaches, at which point he lowers his right hand, which the police claim held a knife, indicated in the Critical Incident video by a police-added red arrow graphic. A small grey or silver object can be seen in his hand. Brown and Mardirossian say that Hernandez only lowered his arm to fend off an attack by Rotar, who he stabbed as the dog attacked him.

Bob Brown and other neighbors of Hernandez accuse the police of needlessly escalating the situation with the deployment of Rotar, and by multiple officers shouting commands, which Brown says intimidated Hernandez.

Yolanda Escobido, another neighbor, made the second 911 call heard in the Critical Incident video released by FPD. Speaking before the City Council on July 21, she said, “I regret making that call. If I had known that the Fullerton Police Department was going to react the way they did, I would have never made that phone call.” She called for an independent investigation, describing the situation that night as “chaotic,” and criticizing police for being unprofessional for not deescalating the situation. “[On the video] All you hear is screaming and yelling.” 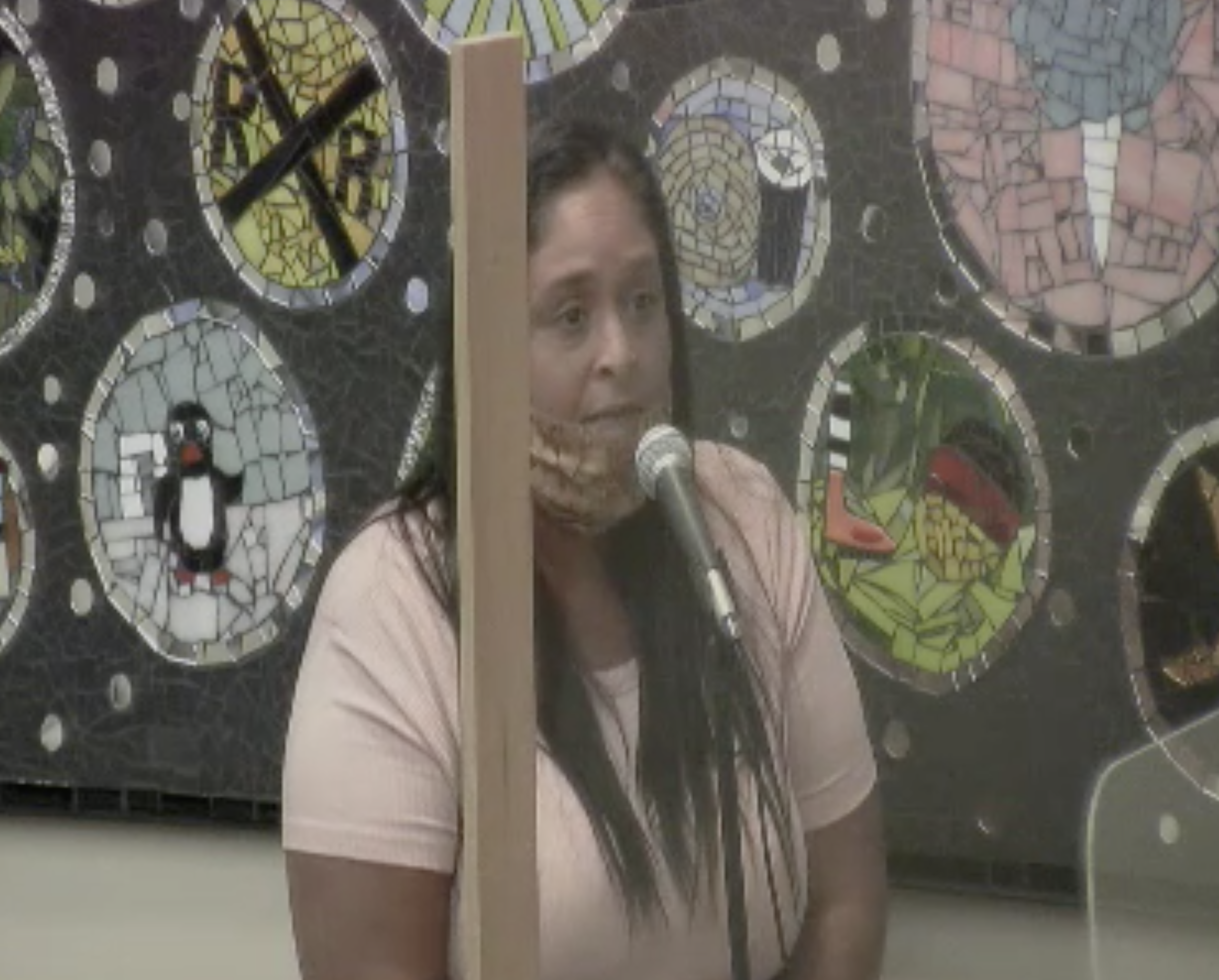 Yolanda Escobido told Fullerton City Council she regrets calling 911, given the outcome of what happened.

Two 911 calls were placed that night, the first from inside the house by Hernandez’s relatives, the second by Ms. Escobido. Both recordings are incorporated into the police department’s Critical Incident video. During the first call at least one gunshot can be heard in the background.

Multiple police units were contacted by the dispatcher and responded to the scene within minutes. The K9 officer handling Rotar, the police dog, was the first officer to arrive on the scene that night. According to police, he was there for several minutes before Hernandez exited his house.

Separate residential surveillance footage included in the Critical Incident video shows several individuals running from the residence, followed by Hernandez walking slowly in the same direction. A red arrow pointing at his hand and word “gun” have been added to the video by FPD, but the resolution is not sharp enough to clearly distinguish a gun in his hand. Mardirossian, the lawyer, said that Hernandez re-entered the house to stow the gun there, then exited again out the front door.

Bodycam video from the scene records multiple officers issuing commands, including for Hernandez to keep his hands up. According to police “he initially complied,” but then began to walk backwards toward his front door. Supporters say he did so to place himself in the brightest lit area of his driveway so that he would be better visible to police. At the time, police say that they had reason to believe a child was inside the residence. Rotar was “deployed” by his K9 handler to “prevent Mr. Hernandez from re-entering the residence,” according to the Critical Incident video narration.

Video from the K9 officer’s bodycam shows an agitated Rotar barking and straining at his leash prior to his deployment. It is even unclear whether the dog was released by the officer or broke from his grip. FPD’s Sgt. Bridges declined to comment on the suggestion that the officer might have lost control of the dog, referring that question to the D.A. Once free, Rotar can be seen running down the sidewalk away from the residence as the K9 officer repeatedly calls “here!” to direct him instead to Hernandez, who standing in front of his house. Mardirossian suggested that Rotar initially ran the wrong direction because he didn’t perceive Hernandez to be a suspect.

Rotar’s charge at Hernandez and the ensuing shooting is seen from two different bodycam views in the police Critical Incident video. Hernandez can be seen standing with his hands in the air, as the dog approaches him. “Hands up” commands can be heard, but as officers approach Hernandez he lowers his right hand to waist level. At this point, according to police, Rotar “began to apprehend Mr. Hernandez, and Mr. Hernandez fell to the ground.” And then, “at some point Mr. Hernandez produced a knife and an officer involved shooting occurred.”

The K9 officer’s own upraised gun in the foreground of the video footage partially obscures the view of Rotar pulling Hernandez to the ground. The K9 officer shouted, “Hey let me see your” and then, in evident surprise, “Hey!” again. At this point, Hernandez is on the ground trying to fend off Rotar, who can be heard to suddenly yelp. The K9 officer then fires twice at Hernandez from close range, shouting, “He’s got a knife!” Hernandez can be heard groaning after the first shot. He rolls over on to his stomach after the second shot. The shadows of several officers can be seen against the house behind the unmoving Hernandez as several continue to shout, “Let me see your hands.”

Calling “watch out” several times, the K9 officer pulls Rotar off Hernandez. The dog tears the prone man’s shirt as he is dragged away by his handler. In the other officer bodycam footage included in the Critical Incident video, the K9 officer can be heard to say about Rotar that, “He was stabbed and he started going after me.” According to police, shortly after the shooting, officers saw blood on Rotar, and, “It was learned that Mr. Hernandez had stabbed K9 Rotar near his shoulder blades.” Rotar was taken to a nearby emergency pet hospital where he was treated.

Mardirossian asserts that Hernandez was “absolutely” shot because he had stabbed Rotar, and that officers on the scene had already made a determination that he wasn’t carrying a gun. He, and others, question why non-lethal weapons like bean bag rounds, rubber bullets, or tasers weren’t tried before shooting Hernandez dead from close range, and why Rotar was deployed in the first place when Hernandez was complying with the commands of officers.

During the same meeting of the City Council on July 21, Rotar was officially retired, having served with police since 2013, a “common service period,” according to FPD’s Sgt. Eric Bridges. Mardirossian called it “adding insult to injury” to accord Rotar “hero status,” questioning the seriousness of the stab wound and the necessity to shoot and kill Hernandez, who, he said, had every right to defend himself against the dog’s attack. Police dogs, he said, are “trained attack tools,” bred for that purpose, and it is a “danger to have such a dog in the community.”

Bob Brown, the neighbor who witnessed the killing, questions whether it is FPD policy to send dogs to attack suspects whose hands are raised in the air, shoot suspects who are in a fetal position on the ground while being attacked by a police dog, and “scream chaotically the same command over and over to create a confusing and intimidating situation” for a person trying to surrender. Brown also contends that the K9 officer shot Hernandez because Hernandez stabbed his dog in self-defense.

Santiago Sanchez, a neighbor who did not witness the killing, also spoke before the City Council on July 21. Sanchez said he looked up to Hernandez who had taught him how to be a father. “I miss him and I pray for justice for what happened to him. It wasn’t right. I still hurt to this day.” 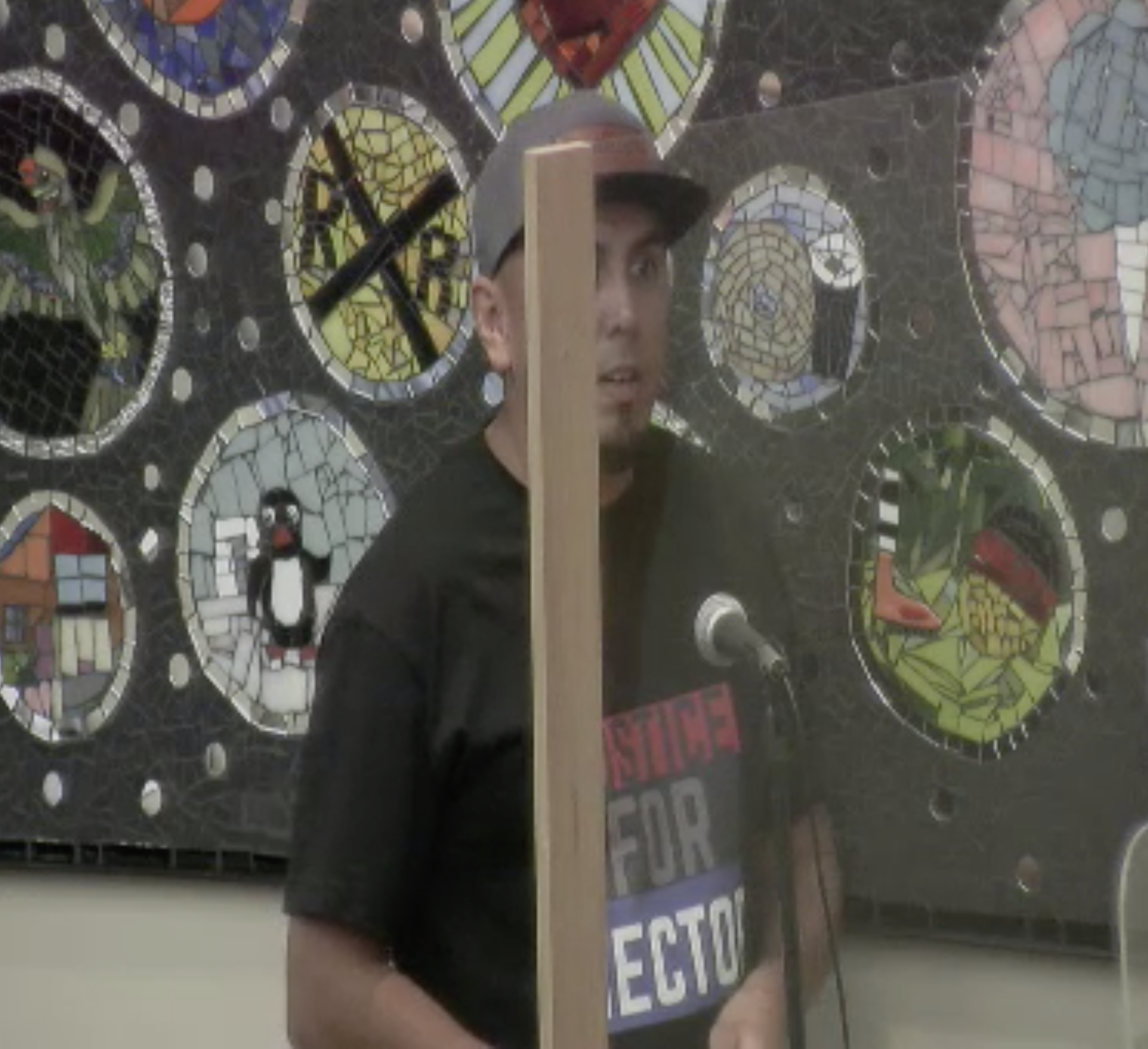 Santiago Sanchez, a neighbor who did not witness the killing, speaks before the City Council on July 21.