Approximately one hundred people gathered in the parking lot of the North Justice Center on Saturday evening, Sept. 19 to mourn the passing of United States Supreme Court Justice Ruth Bader Ginsburg. Memorials were held at courthouses nationwide, including on the steps of the Supreme Court itself, promoted with the slogan, “May Her Memory be a Revolution.” Justice Ginsburg, who died the previous day at the age of 87, had survived cancer for many years, and had previously stated that she planned to serve on the court until she turned 90. 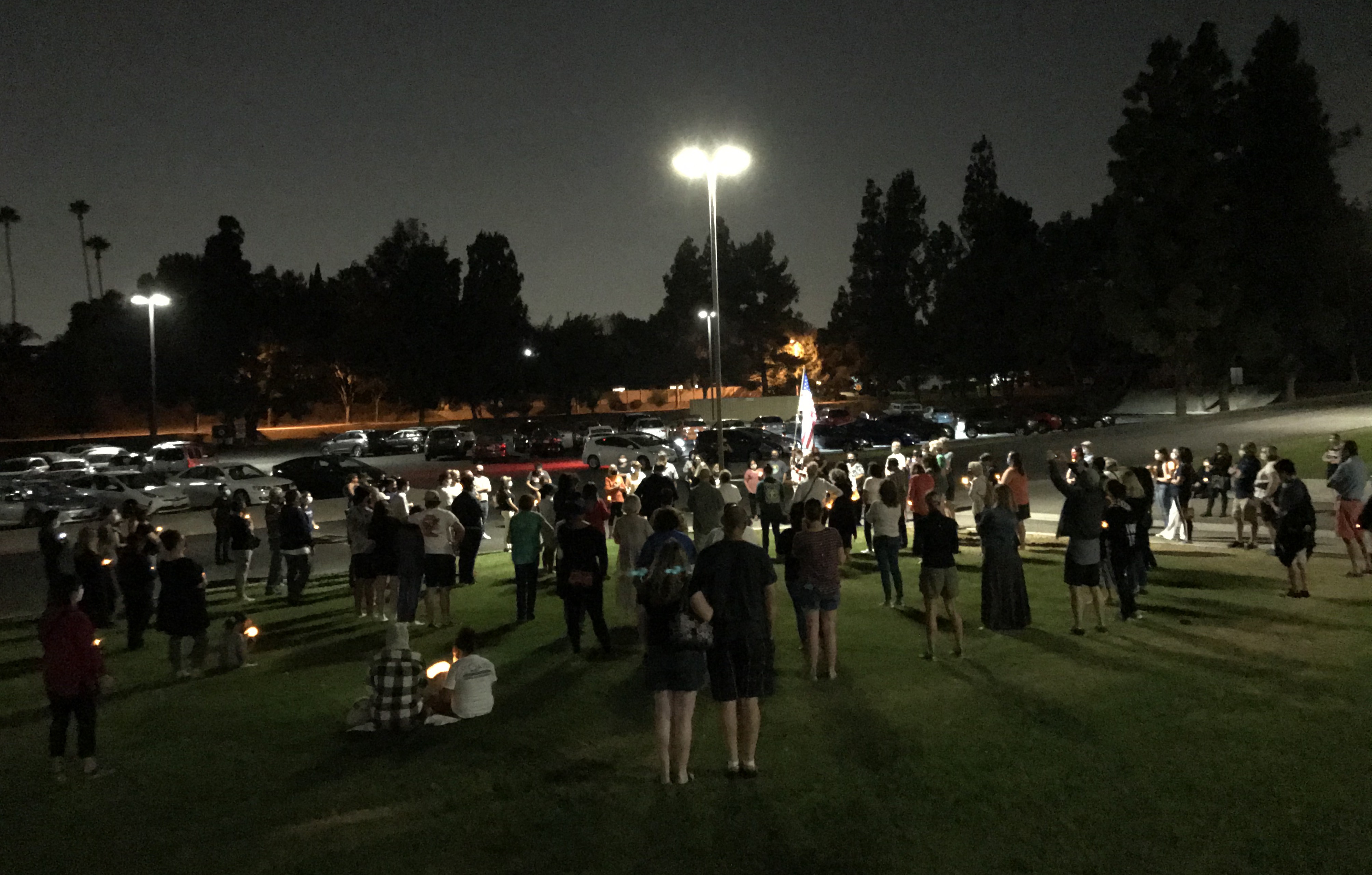 Several attendees remarked that they were surprised at the size of the crowd gathered on a spacious lawn beside the large lot given the short notice of the event. Many carried electric candles or other small lights in tribute to the fallen jurist, and at least one RBG votive candle was observed helping to illuminate the warm late summer night.

Speakers gathered beneath a bright parking lot light, which also shone on a large American flag held aloft throughout the proceedings by local resident Harry Langenbacher, who supplied the standard for the purpose.

Representative Gil Cisneros of the 39th District began the proceedings, paying tribute to the jurist who was just the second woman to serve on the Supreme Court, having been appointed by President Bill Clinton in 1993.

Cisneros was followed by Assembly Member and former Fullerton Mayor Sharon Quirk-Silva, who attended with her husband, current Fullerton City Council Member Jesus Silva. Sharon Quirk-Silva spoke of Justice Ginsburg’s pioneering presence on the high court and the importance of her work there and what an inspiring figure she was for the whole country.

Brea Olinda Unified School District Board Member Keri Kropke recalled a meeting with Justice Ginsburg in an elevator and spoke of how, when she told her she was considering a run for office, Ginsburg encouraged her to do it. 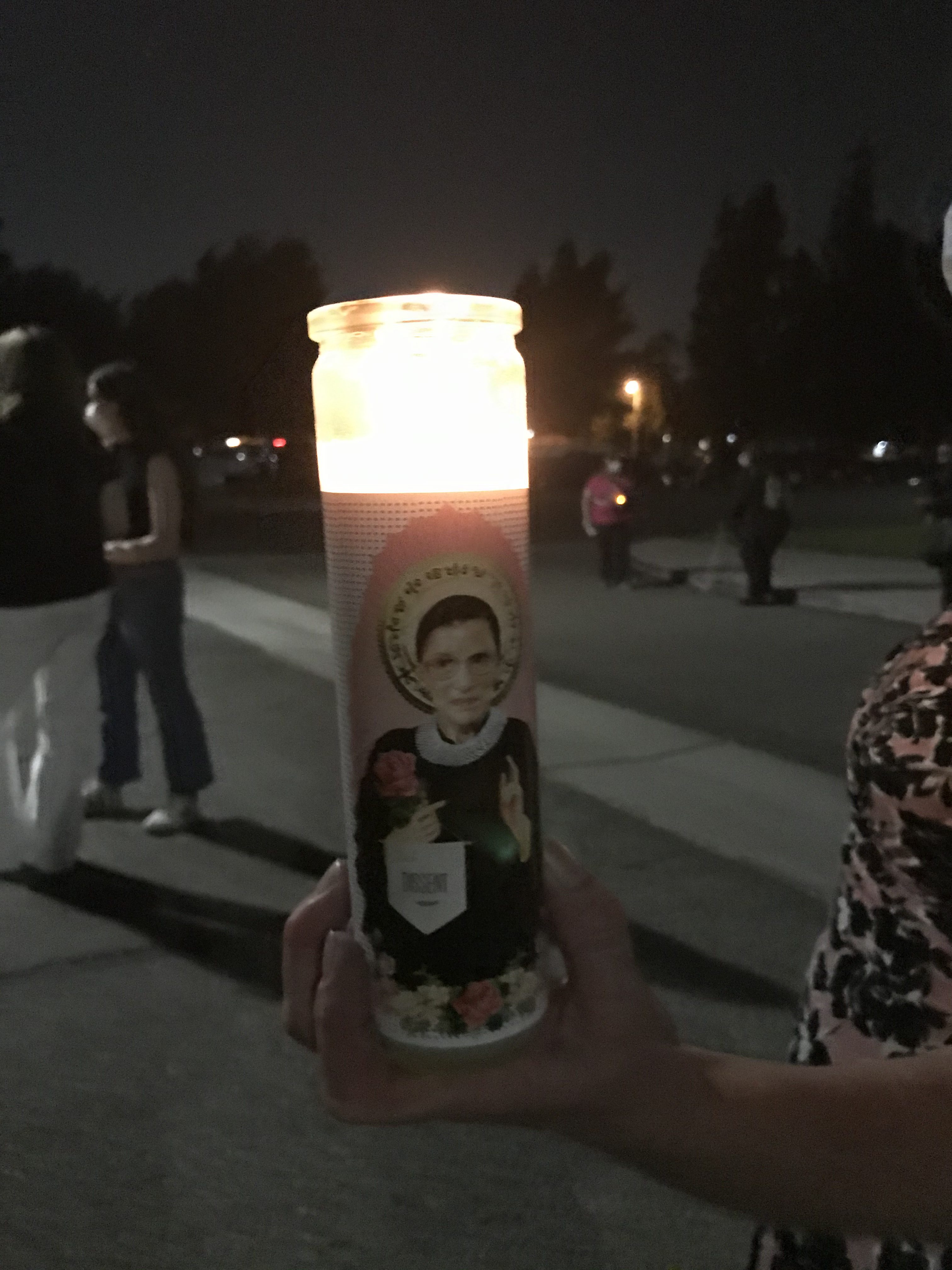 Local resident Sheila Silber said she grew up in Anaheim and spoke about the Brooklyn-born Ginsburg’s Jewish heritage. She said that dying on the eve of Rosh Hashanah, the Jewish New Year, celebrated that very evening, was an honor reserved for the most auspicious. She led the crowd in chanting “Justice, Justice, thou shalt pursue” in Hebrew. Ginsburg was the first Jewish woman to serve on the Supreme Court, and, although raised in a secular household, cited “the demand for justice, for peace and for enlightenment” present in the history of Jewish people as an influence on her life’s work.

Before her appointment as a jurist, Ruth Bader Ginsburg argued several important gender discrimination cases before the Supreme Court, prevailing in all but one of them. She is credited with helping to eliminate discrimination based on gender in federal laws, including a social security rule that had previously reserved death benefits only for mothers, and not fathers. While serving on the court, she helped to strike down an exclusionary policy that prevented female cadets from being accepted to the Virginia Military Institute.