With Sales Tax Measure on the Ballot, City Manager and Mayor Give Dire Financial Assessment

Partially due to the impact of COVID-19, the City is facing a $7.9 million budget shortfall for the current year, and a projected $5 million deficit per year moving forward.

The Observer spoke to City Manager Domer to determine how much of this deficit is directly related to COVID-19, considering property values (and thus property taxes) are up. Mr. Domer has not yet provided this information. Presumably, most of the shortfalls are due to less sales tax revenues. Property and sales taxes are the two main sources of city revenues.

At a study session with City Council on September 15, Domer and City Treasurer Ellis Chang gave an overview of the City’s current financial situation.

Aside from the impact of COVID-19, Domer cited Fullerton’s lack of a strong commercial/retail base (as compared to other cities), the limits that Prop 13 (passed in 1978) placed on property tax revenues, and a large pension obligation for retired City employees (particularly police and fire).

“The City has been forced to resort to holding numerous positions vacant, institute pay cuts, separate non-regular (part-time) positions, issue notices of layoffs to 7 full-time employees, reduce service levels across all departments, and identify use of limited contingency reserves to deal with the health crises’ fiscal impact,” Domer stated in a staff report.

Domer said that if Measure S does not pass, there would likely be further cuts to City services and departments, such as the Fullerton Museum Center, the Library, and other departments. 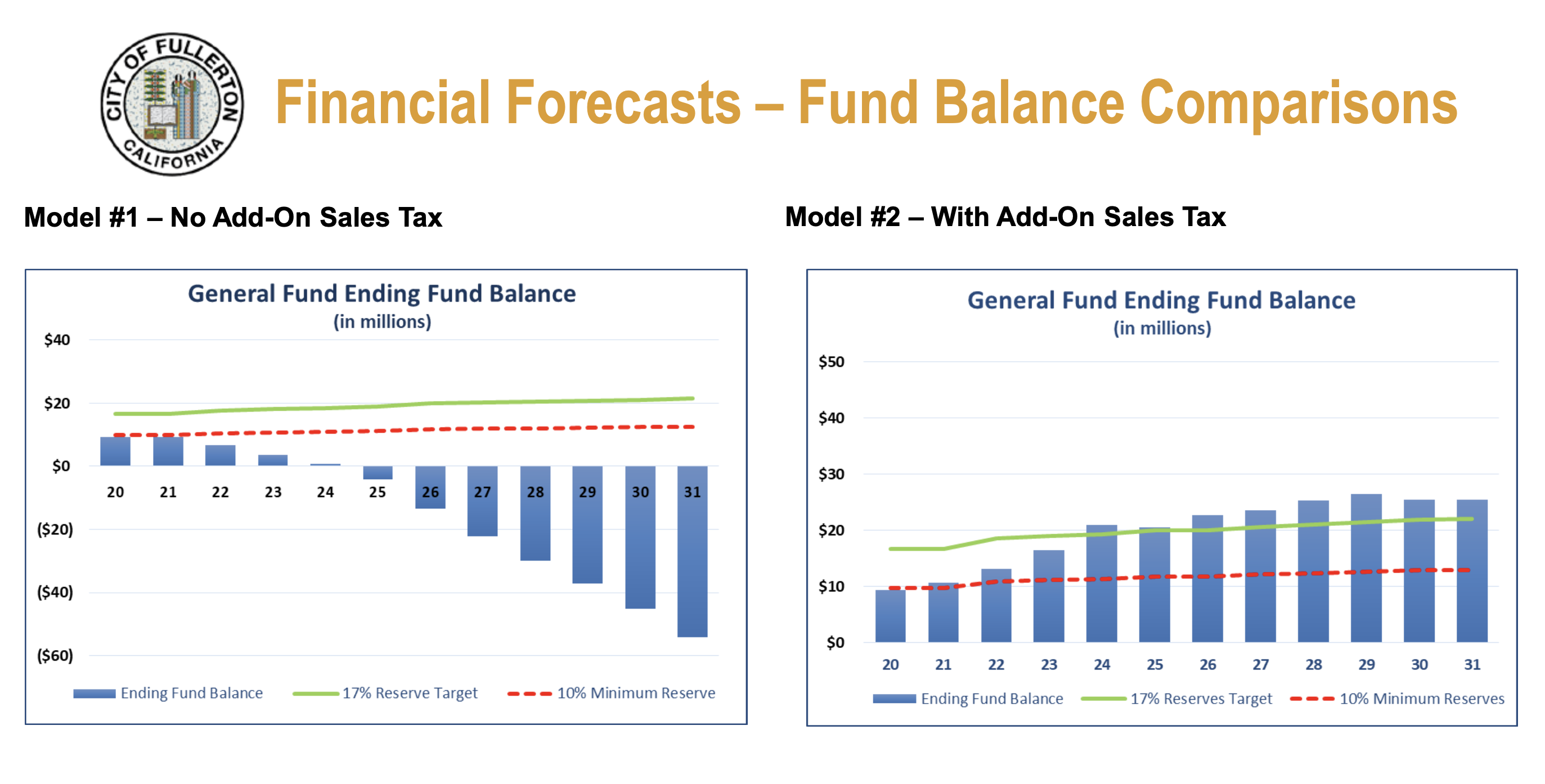 Slide from a powerpoint presentation given by City Treasurer Ellis Chang on September 15 showing vastly different financial projections with vs. without the add-on sales tax.

Councilmember Bruce Whitaker, who had voted against placing the sales tax increase on the ballot, criticized the study session calling it “a campaign event…trying to sell the sales tax.”

State law prevents government agencies from using taxpayer dollars to advocate for such a measure, though they are allowed to “educate” voters.

Critics of Measure S have asserted that the new revenue obtained from the tax would not go to infrastructure, but to maintaining City salaries and pensions.

Mayor Fitzgerald hosted a virtual Town Hall with City Manager Domer, on City Finances and Budgeting on September 24, which featured much of the same information given during the study session on the 15th.

Fitzgerald discussed cuts the City has made to address budget shortfalls, such as laying off 153 part-time employees and 7 full-time employees, and reducing salaries by 5% for all city workers.

“Even with all of those cuts, the revenue levels are inadequate to sustain services that Fullerton residents expect,” Fitzgerald said.

She asked Domer, “What are the most expensive things that we do?”

“Most certainly police and fire—public protection,” Domer said. “Really those are the core elements of what a city does.”

Fitzgerald stated that one police officer costs a total of about $250,000, including benefits.

The Mayor and City Manager discussed Fullerton’s aging infrastructure and the lack of funding to improve, or even adequately maintain it.

It was infrastructure needs that prompted the City’s Infrastructure and Natural Resource Committee to recommend earlier this year that Council place a special sales tax measure on the ballot that was dedicated to infrastructure.

Ironically, it is the open-ended aspect of a general sales tax that has critics concerned that the increased revenue will not go toward much-needed infrastructure repairs, but will be used primarily to maintain the salaries of City employees.

Domer said that part of Measure S mandates the creation of a citizen’s oversight committee to make sure funds are being used mainly for infrastructure. However, Fitzgerald acknowledged that, having served on a school bond oversight committee, “that structure is ineffective as far as keeping governments accountable for how they promised the voters they would spend the money.”

To learn more about Measure S, including the official analysis and arguments for and against, visit the City Clerk’s web site HERE.