Longtime residents are concerned that a massive new 65-acre warehouse project will remove extensive orange, avocado, pecan, and persimmon orchards, many specimen trees such as oaks, and a rare, large Japanese black pine. As open space, the trees and orchards provide habitat for bees and diverse local wildlife. Even a fox and a roadrunner were observed on the property within the past few years.

The developer, Goodman Logistics, has plans to build 4 large warehouse buildings side-by-side with parking between each building. Their current plans envision the removal of all trees, and all onsite structures except for the City’s well facility. As part of their project, they will be adding sidewalks where none now exist, repairing adjacent streets, upgrading traffic signals, and contributing $750,000 to the purchase of a fire engine for the City.

Local group Friends for a Livable Fullerton (FFLF) welcomes this exciting new business, but is hopeful that the City can develop a plan that is favorable to both the community and the applicant, especially in an area in the southeast part of the City, which has almost no parks or open space, and has a deficient parks-to-people ratio. A first step would be an assessment of the trees, the wildlife, including bees, bats, owls, and raptors, and a history of the Selinger family, an important early pioneer family who were the original grove owners. These reports should be done before any decision is made to eliminate the groves. 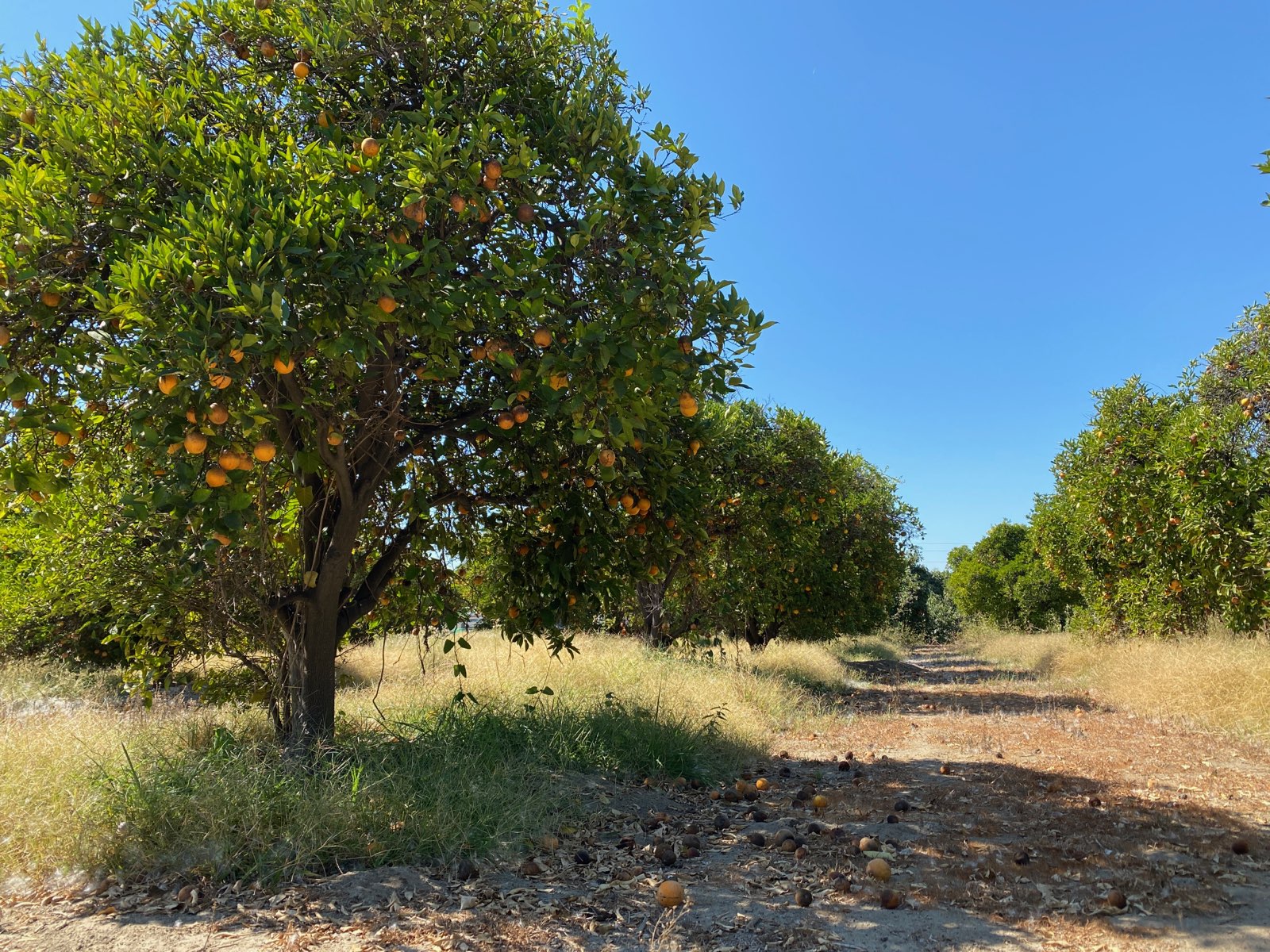 Is this picture in Fallbrook, Vista, or Escondido? No, it’s in Fullerton, a half mile away from two freeways! Drone photo by Jensen Hallstrom.

The Project’s Environmental Impact Report (EIR) missed crucial data. The groves are more extensive and robust than the EIR indicates and contain more than just oranges. There are about 10 acres comprising over 500 mature trees on the property, including oranges, heirloom avocados, persimmons, pecans, pines, and oaks, as well as several additional types that were not able to be identified. A proper tree survey needs to be done before any decision is made as to their destruction.      The report also repeatedly refers to the orchards as “remnant” and “ornamental” and, while stating correctly that the fruit is not sold, it is incorrect that it is not harvested. The consistent use of these terms may be a way to discount the impact of the conversion of farmland to non-agricultural use.

Agriculture was the predominant business and land use in this area and these orchards exemplify an important period in the City’s history. FFLF has photos showing the groves as early as 1927, a decade earlier than the EIR indicates. It’s possible the groves are older still. The pioneer Selinger family purchased the property in 1919 and owned it for 35 years before it was sold to developers and then to Kimberly Clark. They were an important family in their own right, and were friends with other important Fullerton, Placentia, and Anaheim families such as the Tuffrees, Porters, Crowthers, and Melroses, as well as being married into other important families, such as the McWiIliams, Schultes, Athertons, Kellenbergers, Chandlers, and Betz families.

At the recent Planning Commission public hearing, the Commissioners questioned City Staff at length about the City agreeing not to charge the Developer the normal Traffic Impact Fee, that would have amounted to about $600,000. The Developer will be paying it in the form of road and traffic signal improvements. The Development Agreement was released just a few hours before the meeting, so the Commissioners felt they didn’t have enough time to review it properly. There was even some discussion about the potential for this site to be used under the new cannabis ordinance, but the applicant said that, although things could change, some of their funders are in the public pension sector and object to being involved with cannabis businesses.

There was extensive discussion about the trees but most of it was dismissive of the value, with one Commissioner saying that they didn’t understand people letting fruit rot on the ground for years and now acting like the grove is some prized possession. Several Commissioners mistakenly referenced Fullerton Heritage as part of their dismissal of preserving the orchards, but the comment from Fullerton Heritage was specifically about the 1963 vintage building no longer being a viable candidate as a Local Landmark. Fullerton Heritage did not submit a comment on the groves.

In the end, the developer offered to plant a dwarf orange tree near the plaque that they will be installing to commemorate Kimberly Clark as a long-time Fullerton business, and the Commissioners voted unanimously to recommend that the City Council approve the project.

Due to COVID-19, public comments had to be submitted by email to the public hearing, but the 3 commenters who did were frustrated as they had expected to have their emailed comments read in lieu of the normal 3 minutes usually allowed for in-person public hearings.

FFLF believes that the orchards meet the criteria for designation as a Fullerton Local Landmark:

City Criterion 1: Character, interest, or value as part of the heritage of the City

The orchards at Kimberly Clark do not need to be the first or largest to be eligible for listing under this Criterion. These orchards certainly contributed to Fullerton’s agricultural heritage.

City Criterion 3: They are identified with a person or persons or groups who significantly contributed to the culture and development of the City, as above.

City Criterion 9: They seem to have a physical characteristic representing an established and familiar visual feature of a neighborhood.

Residents welcome the new business but hope that a compromise can be reached that provides a win-win for the developer, the future business tenants, and the community at large.

Comments may be sent to the City Council contacts above, or for more info, you can watch the Planning Commission meeting at: http://fullerton.granicus.com/MediaPlayer.php?view_id=2&clip_id=1215.