Date change: The Public Hearing was originally estimated to be in mid-November but has been moved to Monday, November 2. Attend in-person or watch and eComment at https://fullerton.legistar.com/Calendar.aspx.

Everything on the property will be removed, including all trees, vegetation, and buildings, except the City well easement, which is proposed to be expanded at a cost of $600,000 to the City. The well is considered vital for maintaining adequate ground water supply. The existing easement was dedicated to the city of Fullerton for the installation, operations, and maintenance of the City’s Kimberly Well 2. The adjacent easement will be used to remove per- and polyfluoroalkyl substances (PFAS) from both the Kimberly Well 2 groundwater discharge and nearby Kimberly Well 10 groundwater discharge to non-detect levels. If the discharge of these wells is not treated to acceptable levels, the City could lose approximately 3,815 acre-feet per year of groundwater production. 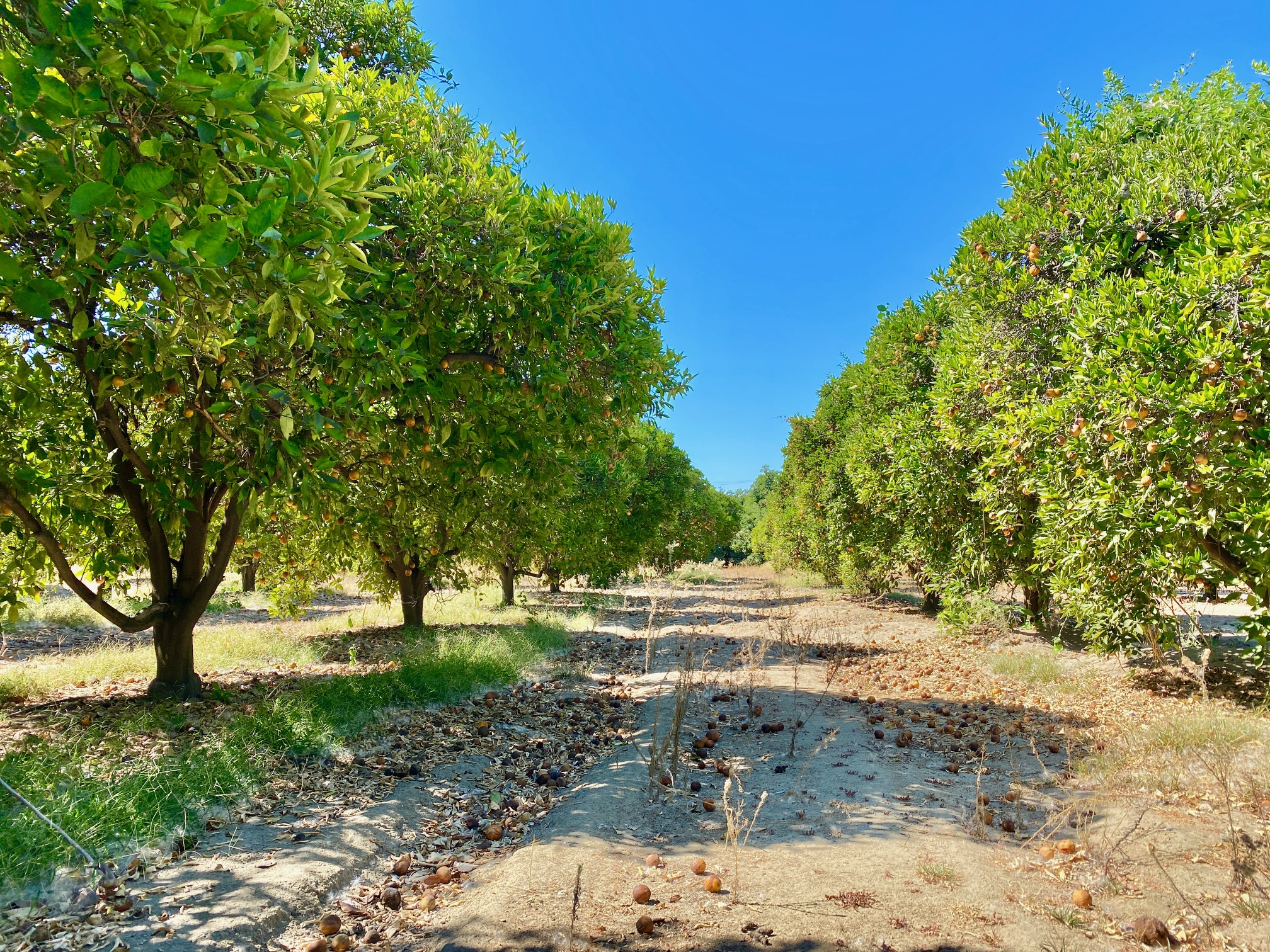 While the new project plans to plant 678 new trees, the existing groves date back 101 years, have aesthetic, cultural, and biological value and should be saved as a unique feature of the current project. The groves have been mischaracterized as “remnant,” but are more extensive (9 acres) and robust than the studies indicate, and contain more than just oranges. There are over 500 mature trees on the property, including oranges, heirloom avocados, persimmons, pecans, box pines, and oaks, as well as several additional types that were not able to be identified.

Local group Friends for a Livable Fullerton (FFLF) is promoting a plan that saves some of the orchards in a way that is favorable to both the community and the developer. They feel it’s especially important in the southeast part of the City, which has almost no parks or open space, and leads to a deficient parks-to-people ratio. Destruction of the groves also significantly increases the impervious area of the site and will lead to an increased heat island effect.

Because the project’s Environmental Impact Report (EIR) missed crucial data, they did not account for the value of the groves as cultural resources or biological habitat. The EIR states, “The Project site is within an urban area and is covered by manmade structures, impervious surfaces, and ornamental landscaping (including the remnant orange orchard). No natural biological habitats, riparian habitats, or other sensitive habitats are present on the Project site.” Because of this misinterpretation, a Biological Resources analysis was not done. While the Developer plans to abide by the Migratory Bird Treaty Act (MBTA), they will not be following any plans to protect non-migratory birds or local wildlife. Local wildlife has adapted to this area, and the groves are home to coyotes, skunk, possums, herons, egrets and lizards.  Killdeer, roadrunners and a fox have all been viewed on the property. A survey should also be done of bees, and potential bats, owls and raptors. 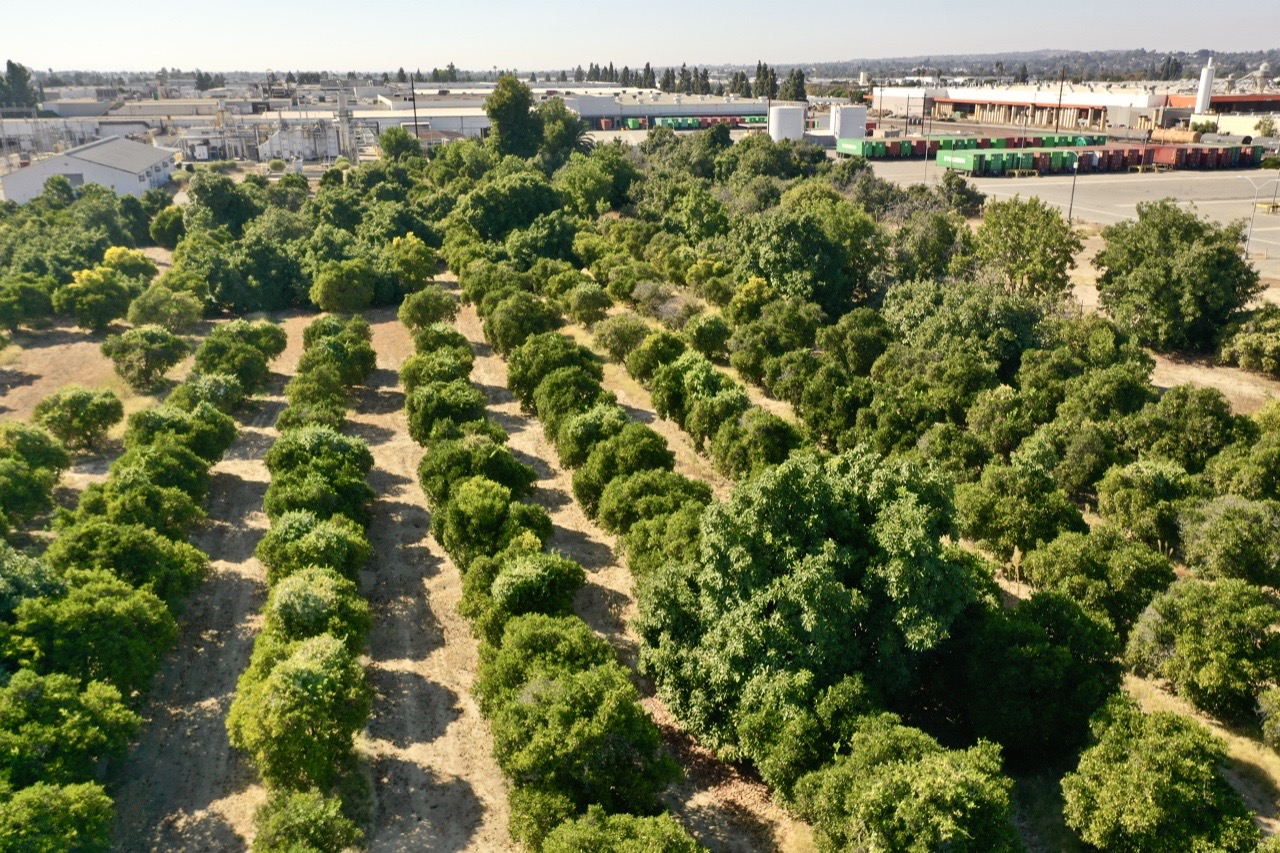 A drone aerial view of the main orchard, looking west from State College. These groves contain hundreds of mature trees including orange, avocado, pecan, and persimmons. Photo by Jensen Hallstrom.

Further, the property has not been thoroughly researched for its cultural and historic value. The orchard was owned by the Selinger family for over 30 years before it was sold to developers and then to Kimberly Clark. They were an important family in their own right, were friends with well-known families such as the Tuffrees, Porters, Crowthers,  and married into other important families such as the McWilliams, Kellenbergers, Athertons, Shultes, Betts, and Chandlers. Friends for a Livable Fullerton believe that the groves are eligible for the California Register of Historic Resources for designation as a City of Fullerton Historical Landmark, and that protection of the orchards is warranted under several criteria.

Due to COVID-19, public comments at the October 14 Planning Commission meeting had to be submitted by email to the public hearing, but the 3 commenters who did were frustrated as they had expected to have their emailed comments read in lieu of the normal 3 minutes allowed for in-person public hearings. While included in the public record, the comments were not read aloud nor summarized as the Planning Commission materials indicated.

Comments may be sent to the City Council contacts below, or, for more info, you can watch the 10/14 Planning Commission meeting at: http://fullerton.granicus.com/MediaPlayer.php?view_id=2&clip_id=1215.