Fullerton Loses a Local Icon, a Friend to Many 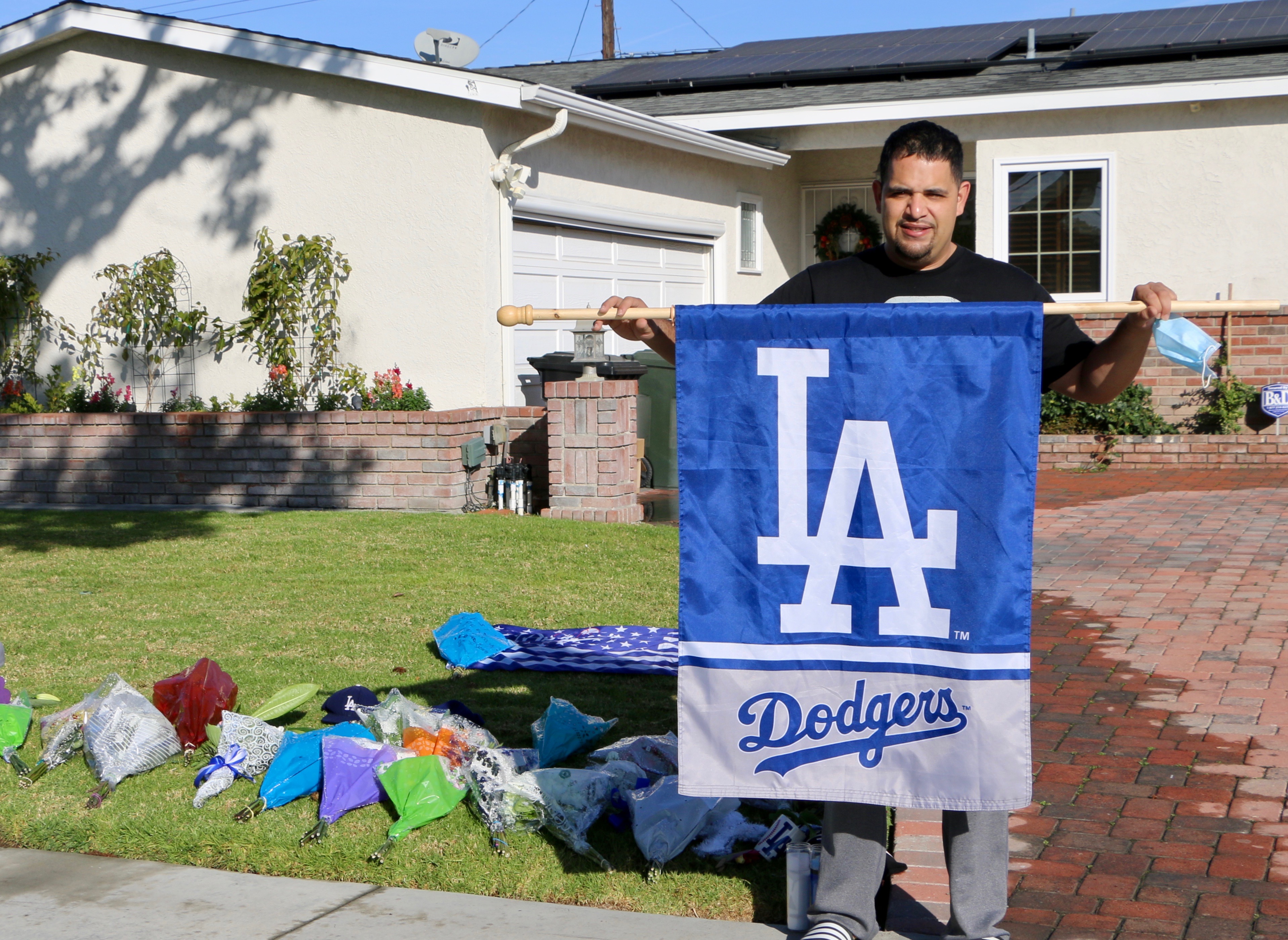 Felipe Ruiz, who was Tommy Lasorda’s assistant for the past 5 years, stands on Lasorda’s lawn with flowers left by local residents.

Not wanting to intrude but wanting to get a photo of some kind, I parked across the street from the Lasorda home and waited until a car left. As I walked up, I figured it was OK to ask the person in the driveway if he could hold a Dodger flag, which I had mounted on a pole at half-mast. Felipe was very friendly and accommodating, in fact, immediately offering me a donut. I noticed a maple bar, which for some silly reason reminded me of a maple baseball bat. I accepted the offer, of course. Above is the photo showing just a small section of the many flowers and mementos left to honor the Fullerton man who will never be forgotten.

Felipe Ruiz had been Tommy Lasorda’s assistant for over 5 years and he told me that Tommy had had a tough year last year not being able to do all of the things he always had, and the inactivity may have been an issue is his declining health. Tommy wanted to live to be 100, and he came close, but as you all learned a few weeks ago, he passed away at the age of 93 from heart failure. You have heard a lot of accolades and accounts of his amazing successes. Here are some thoughts from those who knew him as much more than the Hall of Fame Dodgers manager.

Charlie Pecoraro: “When my family and I got the chance to meet Tommy and his wife Jo at an Angelo’s and Vinci’s wine event, he was everything I was hoping he’d be— personable, irascible, an unfailingly authentic paisan. Tommy was one of baseball’s, and the Italian-American community’s greatest characters. He’ll be greatly missed.”

Tom Elliott: “After being away from home for an extended period of time with his Dodgers, his wife Jo said, “Tommy, I think you love baseball more than you love me.” Tommy’s reply was “But honey, I love you more than I love football and basketball.” Tom Elliott again: “When I reflect back on Tommy’s legacy, maybe his most enduring imprint will be as the Chief Ambassador of our National Pastime, the game of baseball.” 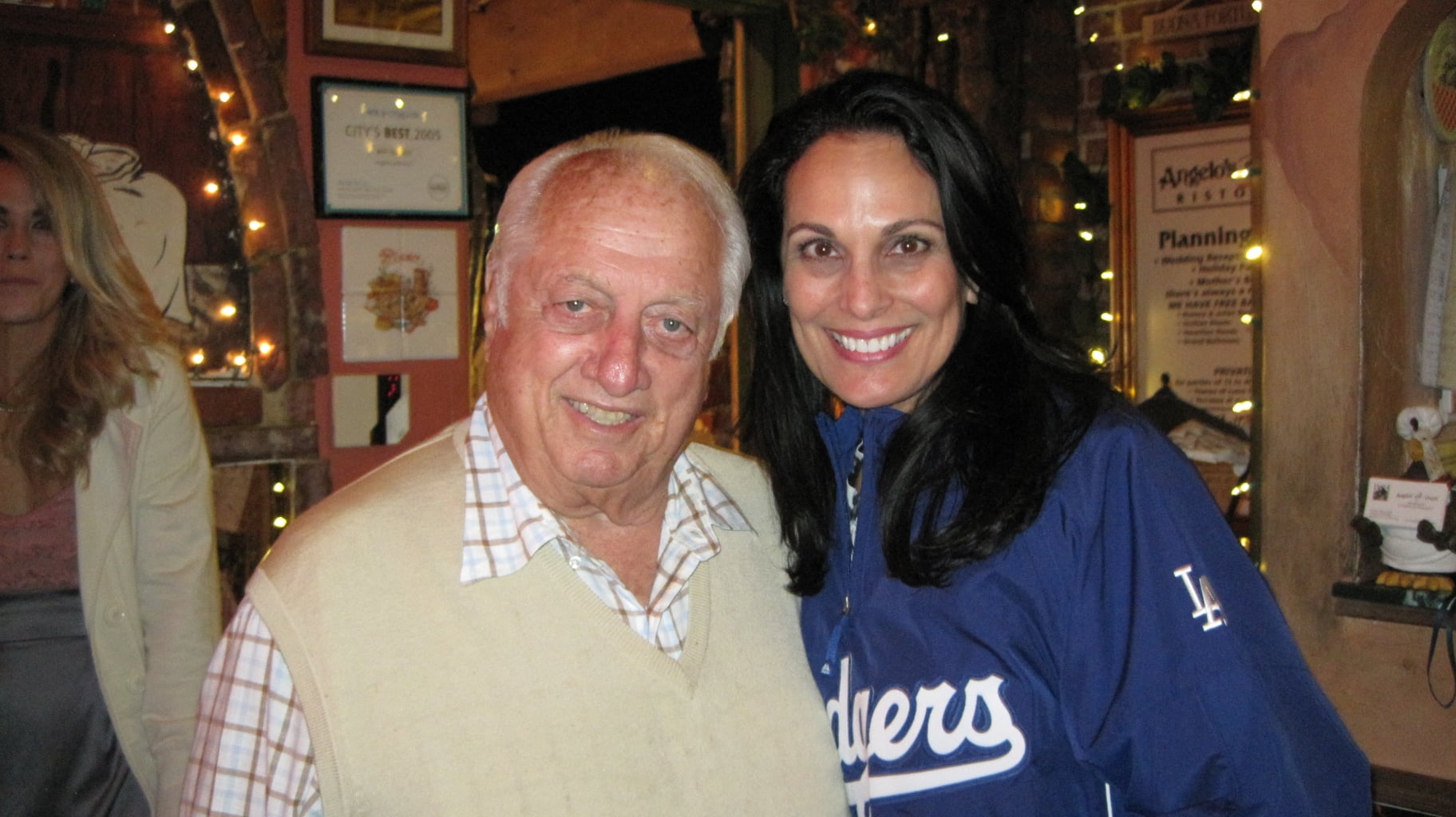 Tommy Lasorda with Cynthia Peck, owner of Angelo’s and Vinci’s restaurant in Fullerton.

Cynthia Peck, owner of Angelo’s and Vinci’s, where Tommy was often found: “Tommy would never refuse an autograph or photo request, no matter how many times his dinner was interrupted. He said, ‘If any of my players were to refuse an autograph they shouldn’t be in the game.’ But he did demand Dodger loyalty from even the youngest baseball enthusiasts.  One night, one of our young customers came up to Tommy with a ball to autograph. The little guy was wearing a Yankee hat and shirt. Tommy said, ‘Take off that hat and cover that shirt!’ He did, and Tommy said, ‘Now that’s good’ and he autographed the ball and offered it back to the kid. Don’t worry, he loved it!”

Daniel Minamide, caricature artist: ”I saw Jo at Past Times Collectibles and at Heroes, but my encounters with Tommy were all at the Stadium when I did gigs for the team at civic functions… The best one I can relate was once a year at the team Christmas Party we were in the buffet line and I remarked to him, ‘I’m glad I’m ahead of you.’ Not sure how he took that, but the fact that it was Christmas may have saved me from taking a Louisville Slugger upside the head.”

Peter Fong, who has written for The Observer, given tours of Dodger Stadium, and took me to an amazing presentation by official Dodger photographer Jon Soohoo: “I have been a Dodger fan since they played at the Coliseum. I liked Tommy’s fire, bleeding Dodger Blue, and his handling of pitchers. He passionately fought for his players on and off the field. He found Mike Piazza in the 62nd round and pitched poorly in the minors to give Sandy Koufax a chance. We’ll miss seeing you around Downtown Fullerton eateries.”

Mike Carlucci, personal friend who knew Tommy well, Dodger Stadium PA announcer from ‘93 to ‘02, Olympics and MLB The Show Stadium Voice: ‘Hey Carlucci, come down here (his clubhouse office) and get some pasta and gravy in your belly NOW.’ “That’s when Tommy used to call up the press box sometimes after a game at Chavez while I was waiting for traffic to die down…On Fan Appreciation Day we were giving away a Toyota Tercel and Tommy asked me, ‘Mike, how do you say this car?’ It is pronounced Terr-Sell, so he hits the mic and blurts, ‘OK Dodger fans, we are giving away a Terkull,’ not once but twice. Fans had a good laugh but it never bothered Tommy, he had more important things to think about. So sad to hear of his passing, his legend and memory will live on.”

Debbie Curtis Bolda, also my friend: “Growing up in West Fullerton, I was good friends with Tom Lasorda Jr. I spent a lot of time hanging out at his house.  His Father was gone quite a bit as he worked for the Dodger’s Farm team in Santa Domingo. When he would come home, he always had time for us. One day, the three of us were sitting on the front porch steps talking. I referred to him as ‘Mr. Lasorda.’ He looked at me and then put his hand on my shoulder and said, ‘Deb, call me Tommy. You’re my friend.’ He will be missed, our neighbor and my friend.”