Since the beginning of the pandemic, hate incidents targeting Asian Americans have surged as a result of the negative stigma linking the coronavirus with China. Over 600,000 Asian Americans make up the residents of Orange County and the community has struggled to grapple with the fear that has risen alongside the Anti-Asian sentiment. 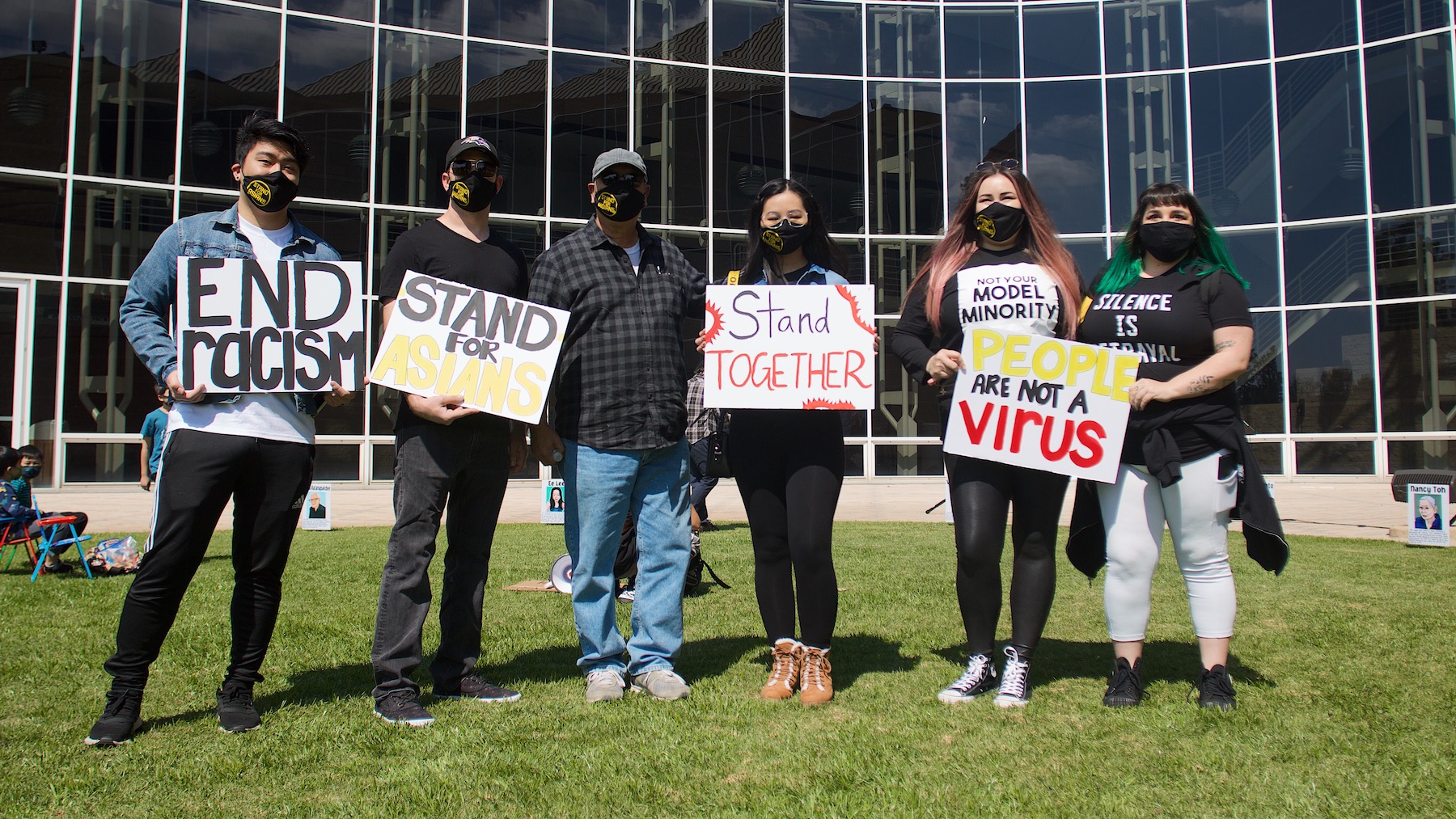 Attendees at a March 13 Rally for Unity at Irvine City Hall brought signs to show solidarity. Photo by Grace Widyatmadja.

Orange County has seen this prevalence of xenophobia dating back to as early as the 1880s when a federal law known as the Chinese Exclusion Act of 1882 forbade China’s immigrants from legally entering the United States or ever becoming citizens.

This Anti-Asian sentiment was carried into 1906 when a Santa Ana resident named Wong Wah Yeh was diagnosed with leprosy and was forced to quarantine in the city’s Chinatown. Using his disease to justify their actions, the citizens of Santa Ana left Yeh to die as they burned Chinatown to ash.

February 19 marked the anniversary of Executive Order 9066 passed by President Franklin D. Roosevelt after the bombing of Pearl Harbor, which authorized the removal of residents deemed a threat to national security. Over 100,000 American residents of Japanese ancestry were moved into detention centers. This is considered one of the most vicious violations of American civil rights in history.

Anti-Asian discrimination still occurs in 2021. On Jan. 28, security footage surfaced online of 84-year-old Vicha Ratanapakdee being shoved to the ground while taking a walk through his neighborhood in San Francisco. The attack resulted in life-threatening injuries and his death two days later. Another video shows a 91-year-old man being pushed down into the cement sidewalk of Oakland’s Chinatown. In Ladera Ranch, the Si family has been the victim of harassment from neighborhood teenagers who yell and pound at their door nightly. 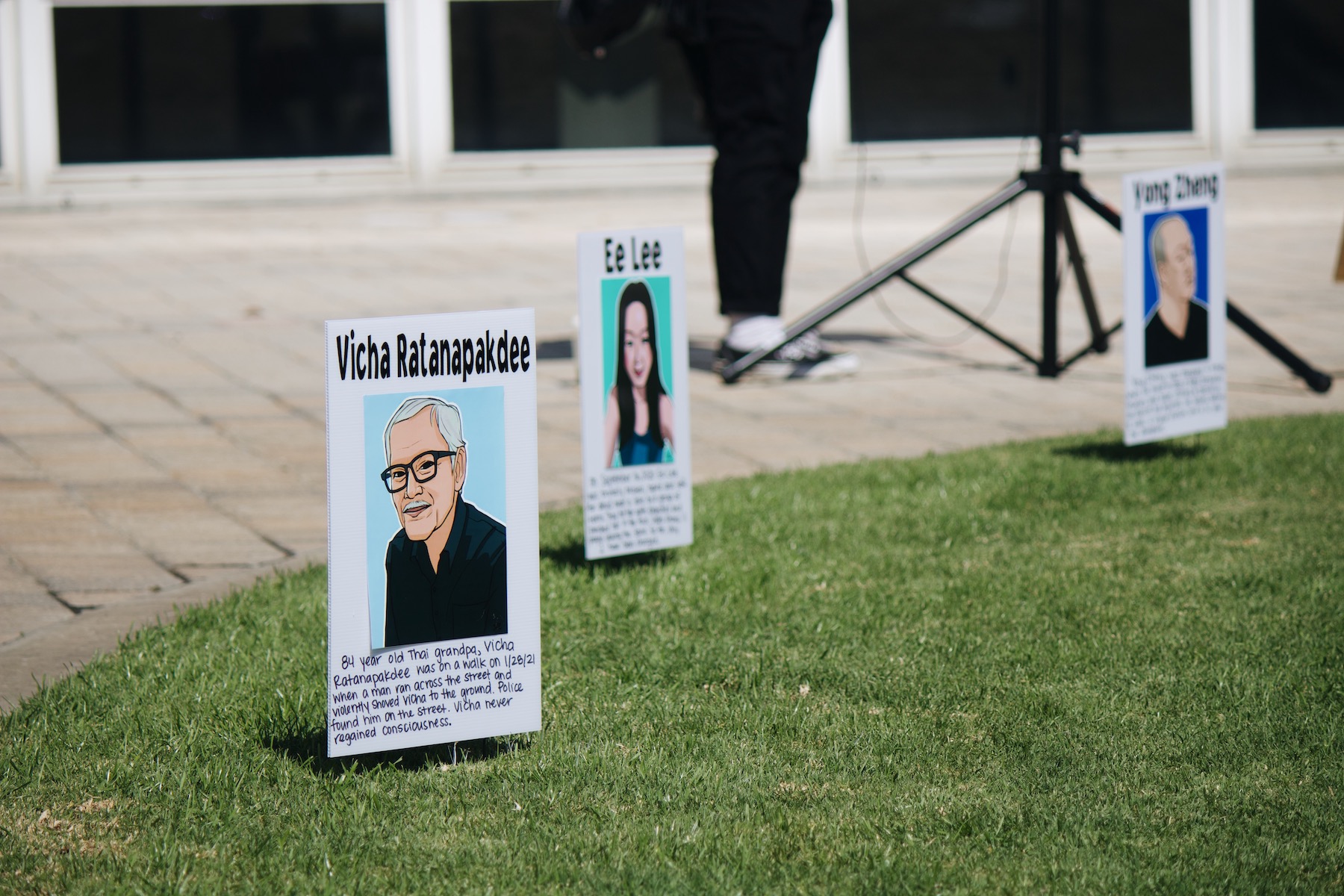 Posters with the names and biographies of victims of Anti-Asian hate crimes were lined up in front of the speakers at the March 13 Rally for Unity. Photo by Grace Widyatmadja.

According to an analysis of official preliminary police data gathered by the Center for the Study of Hate & Extremism at California State University, San Bernardino, Anti-Asian hate crimes increased 149% during 2020 in 16 of America’s largest cities. The first spike occurred in March 2020 when the United States began to see a rise in coronavirus cases.

The Orange County Human Relations Council has been serving Orange County since 1991 by collaborating with and implementing programs into the community that work to eliminate intolerance and discrimination. Resources on how to prevent and report hate crimes can be found at www.ochumanrelations.org.

“In 2020, the Orange County Human Relations Council received about 40 reports that targeted Asian Americans,” Alison Edwards, CEO of OC Human Relations, said. “Historically, hate incidents and crimes are underreported and while the 2020 figures are in the  process of being collected from partners across the County, it shows a 10-fold increase in hate incidents from the last published report from 2019.” 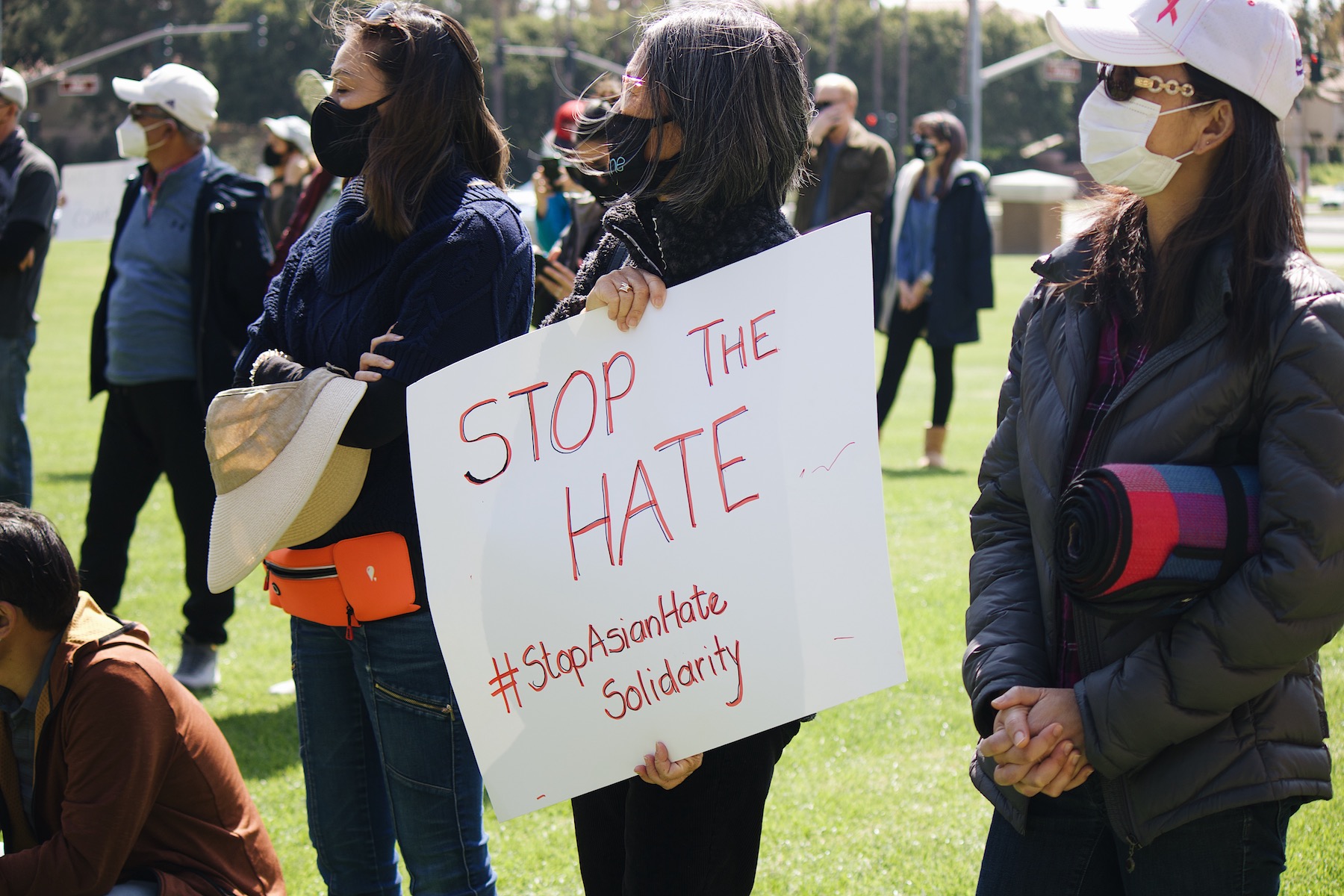 Attendees of the Rally for Unity bring signs to show solidarity. Photo by Grace Widyatmadja.

“Very early on when the pandemic became the focal point of the news, the Administration in Washington and the head of it, really believed in racial dogma,” Fullerton City Councilmember Fred Jung said. “At every opportunity he was calling it the ‘Chinese virus’ and ‘kung flu.’”

Jung was elected last November to the Fullerton City Council representing District 1. He said that the former president’s use of harmful Anti-Asian rhetoric legitimized the negative sentiments as an acceptable action for others to partake in. The city of Fullerton has not addressed these hate incidents but Jung plans to use his position as an Asian American City Councilmember to bring awareness to these issues and advocate for justice.

“Nothing has been done short of me speaking about it. They didn’t put forth a resolution of any kind; nothing’s been done. Nobody even comments on it,” Jung said. “Asian American attacks are happening and no one talks about it. I expect better.”

Tammy Kim and Priscilla Huang are the co-founders of Asian Americans in Action (AAIA), an advocacy organization based in Orange County. They are two leaders who have been fore-fronting the calls for justice within the Asian American Pacific Islander community. Their work focuses on advocacy, political education, and civic engagement.

Last April, AAIA submitted a letter to the Orange County Board of Supervisors requesting a resolution specifically condemning xenophobia and Anti-Asian discrimination to be passed, but a declaration celebrating diversity was issued instead.

Kim is also the Vice Mayor of Irvine and she has implemented a system for Irvine to track and report the City’s hate incidents.

“What I’m hoping is that the City itself recognizes that [by] collecting their own data, the City can be knowledgeable and we can act,” Kim said. “Right now, if you don’t have data, you know nothing. We have to have a culture within the City that is accountable to all of our residents. Issuing resolutions right now is not enough.”

Huang said that it’s important to enact a coordinated community response that begins with educating people to understand what constitutes a hate crime and how they can help when they see one.

“I think one of the things that I’ve been struck by reading all of the different stories that have come out about Asians being attacked in public is that nobody helps them. They ask for help and that just breaks my heart every time,” Huang said. “We need to create a culture that really promotes inclusivity and really also promotes and fosters active intervention by other people.”

On March 13, a Rally for Unity hosted by a group called Stand for Asians Solidarity was held at Irvine City Hall with guests like State Assemblyman Steven Choi, State Senator Dave Min, and Congresswoman Katie Porter scheduled to speak. The inclusive event was open to all with the hopes of elevating awareness of Anti-Asian hate and shedding light on struggles experienced within the community. 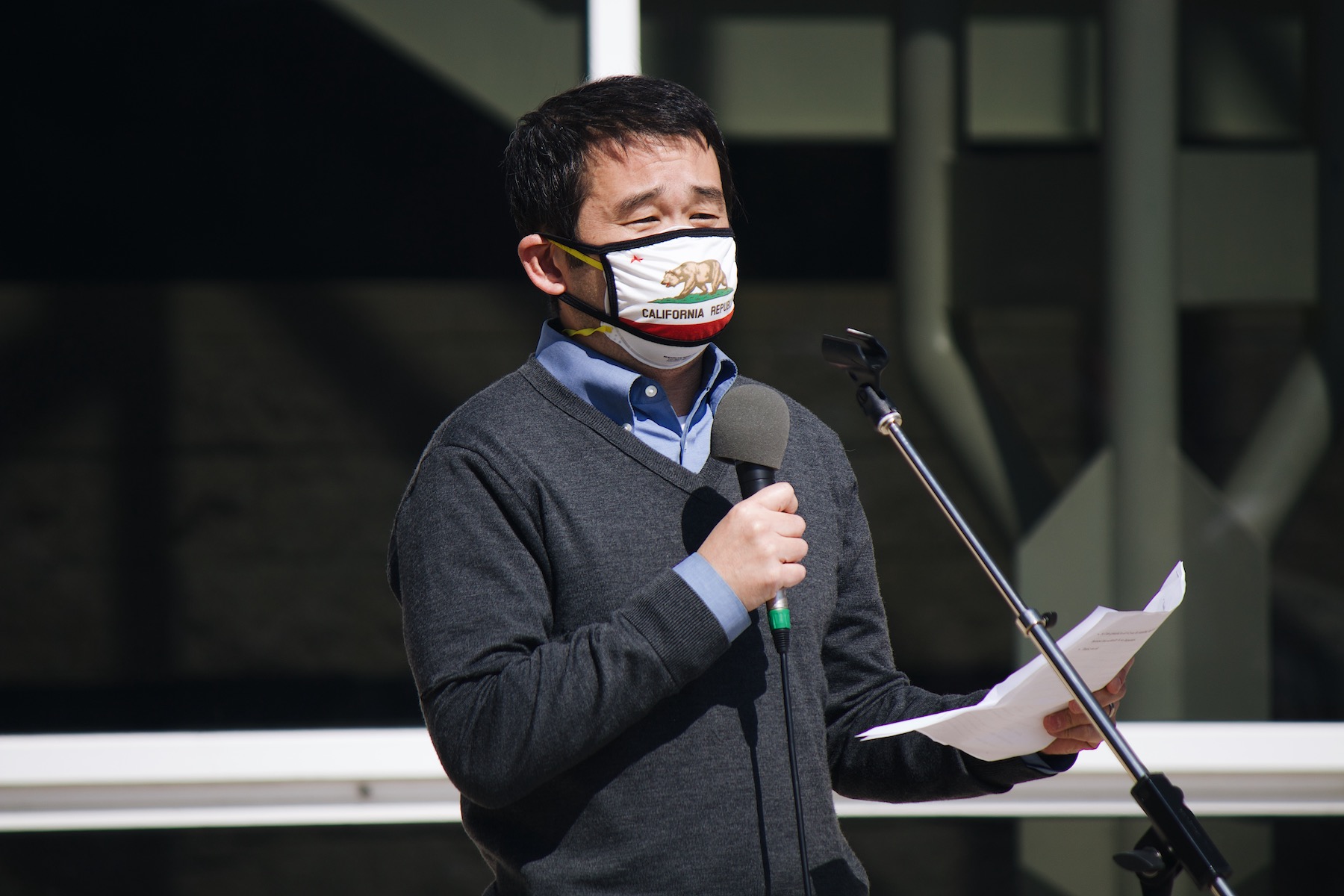 “We need to step up and fulfill the American promise of freedom and equality for the Asian American community,” Congresswoman Porter said. “We are here today to celebrate our vibrant community, not only for Asian Americans and Pacific Islanders, but for every single Orange County family. In solidarity, we will defeat hate.” 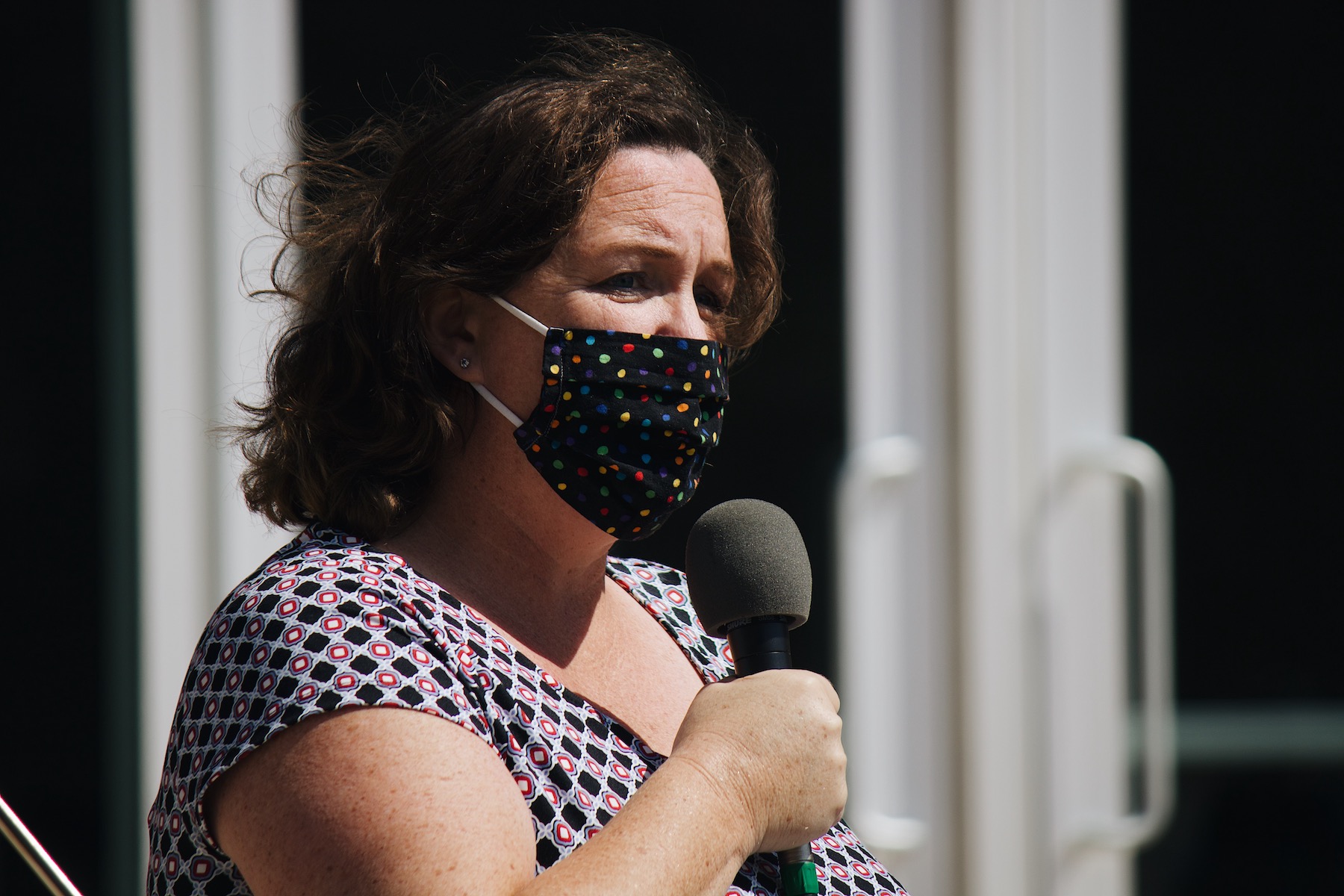 Congresswoman Katie Porter speaks at the Rally for Unity. Photo by Grace Widyatmadja.