Fullerton’s City Council has approved an amendment to the City ordinance governing Short Term Rentals (STRs) that limits the practice to “home sharing,” where the property owner is present during the rental period, and bans “whole house” rentals where the owner is not present. The same amendment had been rejected by the Planning Commission the previous month. 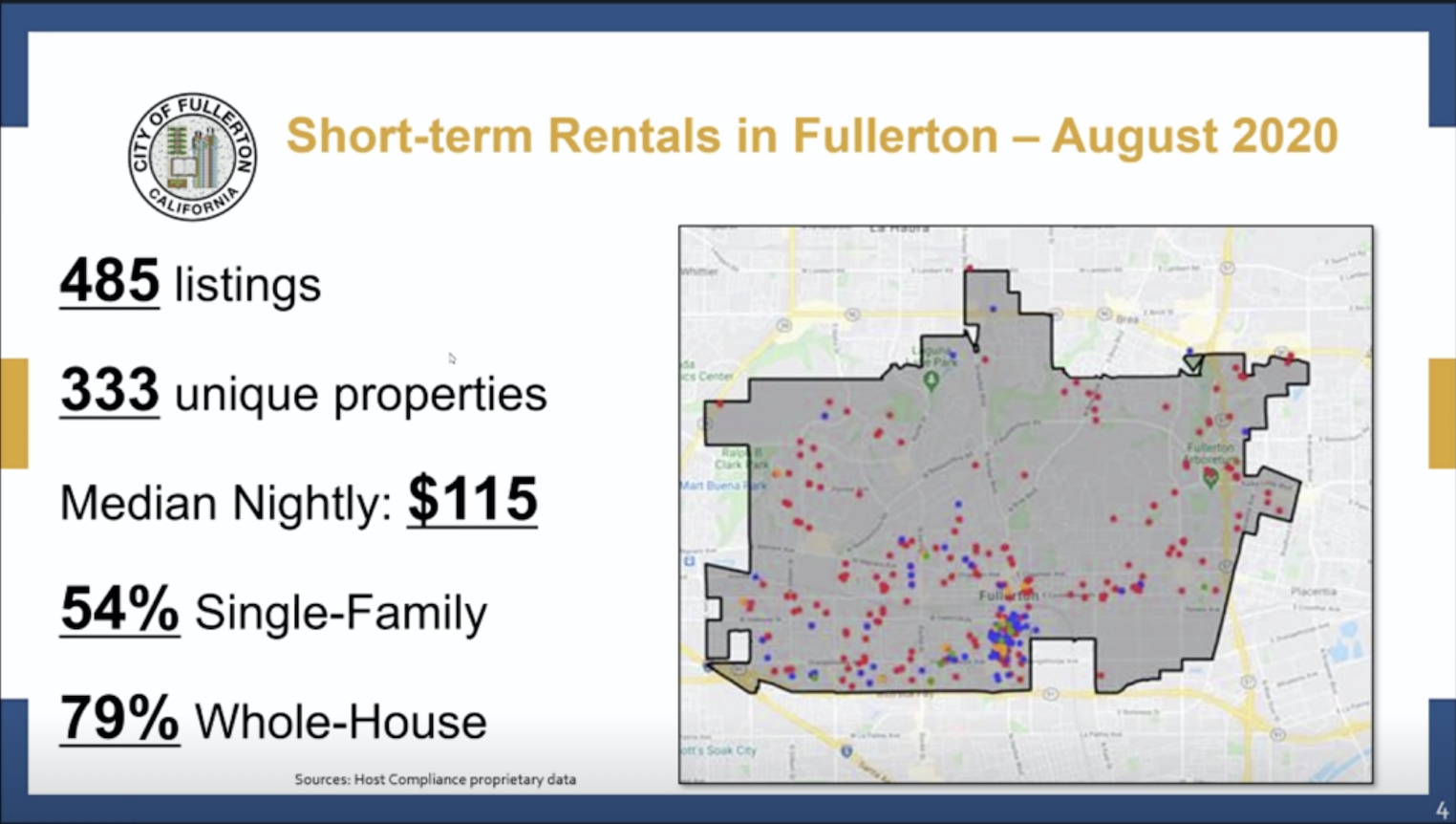 STRs are defined as rentals of less than 30 days and are often used for short vacation stays in Southern California for families visiting nearby tourist attractions and beaches. They are an attractive alternative to hotels for many people and have become more financially lucrative for owners who advertise their properties on well-known internet sites such as Airbnb and VRBO. Some OC cities allow the practice, while others, like neighboring Anaheim, banned them outright in 2016.

Many City residents object to STRs altogether, arguing that they are an incompatible use of residential properties, and fearing that streets and even entire neighborhoods might be transformed into de facto hotel districts. Others contend that most STRs have not been a problem, and that homeowners should have the freedom to capitalize on the value of their homes as rentals.

In October 2020 the City Council voted to officially allow STRs but require the owners to obtain permits before they can rent their properties. Council also set limits on total numbers of STRs as well as minimum distances between them to prevent over-concentrations of rentals in neighborhoods. The Council decision also required owners to submit applications and pay a fee for STR properties. These rentals are subject to the City’s Transient Occupancy Tax.

At the time, the Council did not, however, require that property owners be present during rentals, despite hearing from neighbors of some STR properties who complained that without an owner on site they had no one to notify about excess noise and other problems. Some STRs have no owner occupants at all, a situation preferred by many renters who enjoy having the homes to themselves.

During the April 20 meeting, Community and Economic Development Director Matt Foulkes said that shortly after the Council’s decision took effect last fall the City was informed that Local 11 of the hotel and restaurant workers union UNITE HERE threatened to sue the City for not properly following the California Environmental Quality Act (CEQA), in their October decision.

The City Council responded in a later closed session meeting by directing the staff to devise a compromise in the form of an amendment to the Municipal Code that would ban STRs where an owner is not present. The amendment first went before the Planning Commission on March 3 who rejected it on a 4 to 1 vote. Because of the threatened legal action, the City did not release the applications for STR permits following the Council’s approval of the process.

During the April 20 meeting, Mayor Bruce Whitaker said he didn’t want to see Fullerton become known for bans and restrictions. He acknowledged that fears about disruptive STRs in neighborhoods came from “a good place,” but was unconvinced that they represented a chronic problem in the City. But a local homeowner named Lupe said investors had purchased a home on her block and rented it out to students who held loud parties that impacted her property. Each time a group of renters damaged the rental home, the owners would simply repair it and rent it out again.

Lupe supported the amendment because she wanted her grandchildren to be able to grow up with neighbors they could trust, not strangers coming in and out of homes on her street.

Several other people spoke before Council during the public hearing, including local homeowner Tanya McCrory, who said that she and her husband rented out their home for two years and hadn’t experienced a single problem. She was concerned that lobbyists from Anaheim were present that night to influence the Council’s decision.  Austin Lynch of UNITE HERE objected, saying that union members who live in Fullerton should not be called “outsiders.”

An organizer and clergyman named Adam Overton said that unrestricted STRs had led to the “hollowing out and erosion of communities” across the country during a housing crisis.

CEQA attorney Jordan Sisson, representing UNITE HERE, said that STRs were clearly not residential, and that courts have upheld total bans of the practice.

Councilmember Fred Jung referred to STRs as a “product of our obsession with convenience and social media,” and “a short-sighted approach to property rights.”

“They’ve eroded our sense of community and our identity as a city,” Jung said. Following his comments, he moved to approve the amendment, and was immediately seconded by Councilmember Jesus Silva.

Mayor Pro Tem Nick Dunlap disagreed, saying that he considered the existing ordinance that restricts the total number of STRs to just 325 out of Fullerton’s approximately 40,000 housing units a reasonable one. He called UNITE HERE’s threatened lawsuit a “strong-arm tactic,” and a “shakedown,” stating that the union has had the opportunity to shape the policy around STRs in the City for the past five years.

Union members and other individuals had spoken before the Council on several occasions in the past, and to the Planning Commission on March 31, frequently casting STRs as a threat to their livelihoods, particularly this past year when many workers had hours reduced because of pandemic-related travel restrictions. UNITE HERE’s opposition is seen as an effort to prevent competition to hotels and motels in the Anaheim Resort area where many of the union’s members work. “The unions are there to advocate for working families, just like big businesses have their lobbyists that are advocating for them,” Councilmember Ahmad Zahra said. According to Zahra, a lot of the union’s members live in south Fullerton in the district he represents on the Council, over 100 in the City overall. “I believe they deserve a decent and dignified living,” he said.

Some public speakers, including a representative from LAANE, The Los Angeles Alliance for a New Economy, said that allowing short-term rentals was inappropriate in a time of housing shortages, an argument picked up by Zahra, who was the only member of the Council to point out that the owners of STRs were not necessarily Fullerton residents who might want to rent out their home for extra income, but rather outside corporate entities forming to buy housing stock to use as STR investments. He preferred to see such investments in hotels, he said.

Mayor Whitaker countered that low numbers of STRs allowed was not enough to impact property values, and that homeowners deserved to realize the highest and best uses of their properties, which would be impeded by amending the ordinance to ban whole house rentals.

The Council eventually voted 3 to 2 to adopt the amendment, with Whitaker and Dunlap dissenting. Owners of existing STRs will have one year from the date of the adoption of the ordinance to either convert their listings to home-sharing or cease to operate altogether.