Mother’s Day is a day of celebrating motherhood. Whether it means taking on chores you despise, making her breakfast in bed, or writing a simple poem that will warm her heart, many of us have our own ways of celebrating our moms. However, in our community we do not realize there are kids who are unable to view this day without feeling stressed. These are children who have gone through traumatic experiences that left them without their biological moms.  Despite being in the care of their foster mothers, they could still be wondering about their real moms, which not only hurts, but creates an awkward situation between themselves and their foster mothers during Mother’s Day. I learned about it when I volunteered to make Mother’s Day cards for foster moms during the 2021 Love Fullerton city-wide service day on April 24. 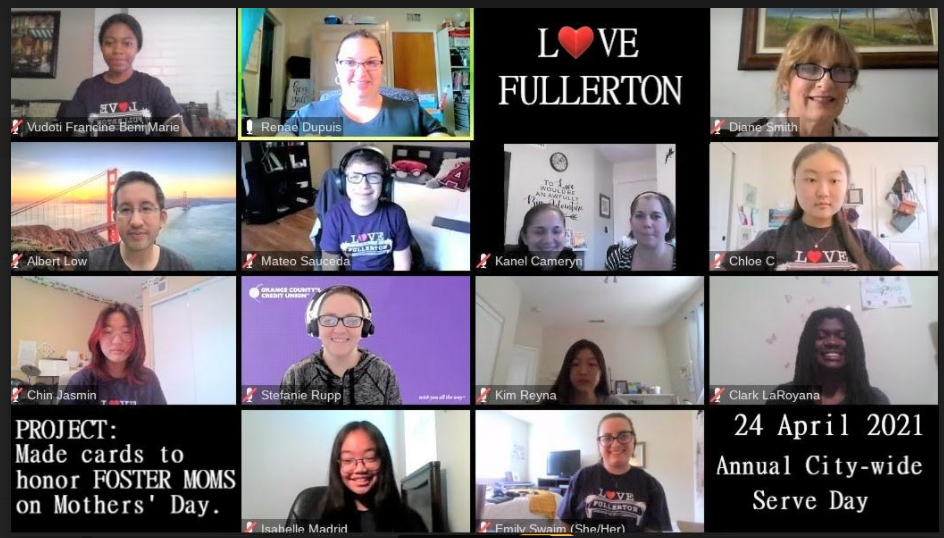 There are at least 480 Southern California moms who, out of the generosity of their hearts, are taking care of children aged infant to 18 years who are victims of trauma. Despite a harrowing experience in their young lives, these precious children have the opportunity to grow into remarkable citizens capable of making significant contributions to our society all because they are given a second chance at having someone they can call Mom.

I grew up knowing doctors, nurses, firemen, and police officers among the community heroes we celebrate in school. It is only recently that I realized these adoptive moms are also our community heroes, yet they barely receive the recognition they deserve. This inspired me to honor them by joining the virtual volunteer service through Zoom wherein the director of the Resources, Education, and Support for Parents Interventions for Trauma-Sensitive Environments (RESPITE) program, Renae Dupuis, who is a foster mom herself, shed light on the role of foster mothers in “healing children from hard places.” I invited my friends and my Young Observers team to join me in this quest to make the foster moms feel special.  Not everyone can be a foster mom.  It is meant for special people with great capacity for sacrifice, sensitivity, and the time to undergo training and close collaboration with the agency they are tied to.  After the Zoom meeting, we each created at least five cards for foster mothers. It was an eye-opening experience for all of us. We learned some hard realities through the eyes of foster moms and felt grateful we had the opportunity to honor them.  For more information on how you can become a foster mom or parent, or if you need support regarding foster care, check the OC United website: https://ocunited.org/initiatives/fostercare/respite/. 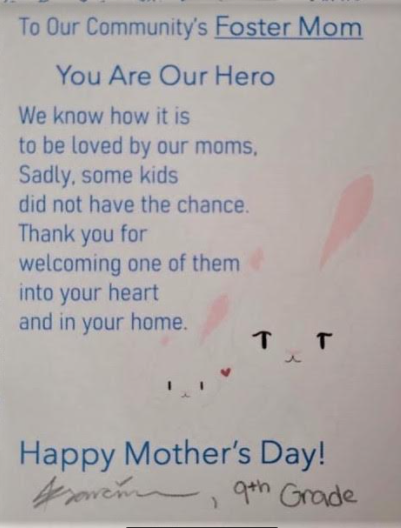 Marvel’s newest trailer for the upcoming film, “Shang-Chi and the Legend of the Ten Rings,” is making headlines across the globe. Expected to air in theaters this Sept. 3, this action movie features Marvel’s first Asian superhero protagonist played by actor Simu Liu, with an additional Asian-majority cast.

As an adaptation of the 1973 comics, Master of Kung Fu, this film highlights Asian culture and representation to create an enticing martial arts movie. And although skeptics fear a whitewashed or culturally inaccurate film, Marvel Productions fans eagerly anticipate this long-awaited, 21st-century rendition.

Cinco de Mayo, which means the fifth of May in Spanish, is a Mexican celebration held every year on, you guessed it, May 5th. Although it is generally a Mexican holiday, it is celebrated more in the US and is recognized by other nations around the globe. During this celebration, people pay tribute to Mexican heritage and culture, which involves singing, dancing, and most importantly in my opinion, excellent food.

The roots of Cinco de Mayo date back all the way to the Battle of Puebla, which occurred on May 5, 1862. The Mexican Army, led by General Ignacio Zaragoza, was fighting against the French army. The French were trying to get to Mexico City and had a much bigger and better-equipped army than that of the Mexicans, so hope was scarce. However, the Mexican army ultimately prevailed and came out victorious against the French. The victory at Puebla raised the Mexican army’s spirits and gave them hope as they spoiled the French’s plans for an invasion. This victory was so significant in Mexican history that, just four days later on May 9, President Benito Juárez declared it a national holiday; it was originally called Battle of Puebla Day. This battle may have also altered U.S. history as well. If the French army, who had not been defeated for almost 50 years at the time, had taken down the Mexican army, they would’ve most likely joined forces with the Confederate States of America and fought alongside them in the Civil War.  This would have drastically changed America, possibly splitting the US into two countries such as the United States of America and the Confederate States of America.  There are more possibilities but suffice it to say that Cinco de Mayo is worth celebrating by both Mexico and the USA.

Camping is a great idea when it comes to COVID. I will be camping a lot this year—Sequoia, Joshua Tree, Big Sur, Zion, and Bryce Canyon. The reason why I started to like camping is because it gives you a break from your problems and looking at a screen all day. Every time my family goes camping, I feel so grateful and happy that I’m there. Even though a 4-hour drive is long, it is totally worth it to see so many stars, nature, and views. We went to Death Valley a few weeks ago, and I’ve never seen so many stars in my life. If you’re interested in going camping, you can go to Recreation.gov or ReserveCalifornia.com to find your next adventure. But don’t forget, for popular places you should make reservations up to 6 months in advance.