For the past year and a half, a debate has raged in the Brea School Board chambers and on social media over whether to change the name of Fanning Elementary School, over allegations that the school’s namesake, William E. Fanning, was a member of the Ku Klux Klan in the 1920s. On January 28th, the Board voted 4-1 to retain the “Fanning” name, but change the school’s name to Fanning Academy of Science and Technology, to reflect the school’s new emphasis on computer science.

The primary source of the allegations against Mr. Fanning is a list of alleged Orange County Klan members (which Fanning’s name appears on) donated to the Anaheim Heritage Center in 1972 by local historian Leo J. Friis. Another piece of evidence is an oral history interview at Cal State Fullerton in which William’s son Karl remembers going to a Klan rally with his family in 1924.

The organizers of the “Re-Name Fanning” campaign have cited this evidence, as well as more general historical evidence that, in addition to having an active Ku Klux Klan in the 1920s, Brea was also a “Sundown Town,” in which African-Americans were not allowed in the city after sundown—a social reality described in sociologist James Louewen’s book Sundown Towns: A Hidden Dimension of American Racism. 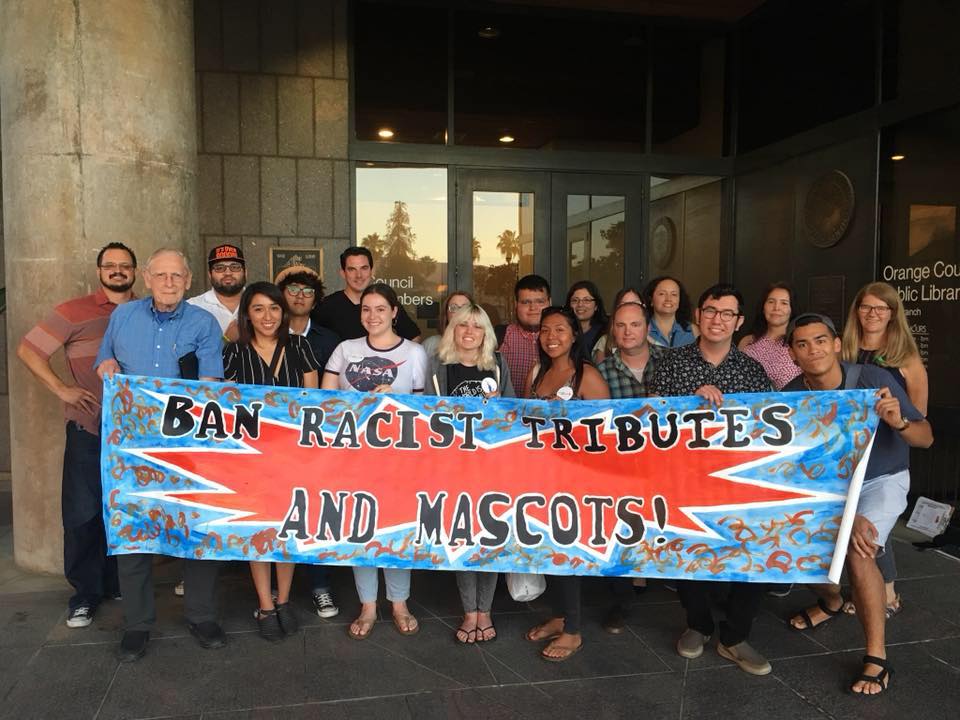 The Re-Name Fanning campaign began in 2017.

Opponents of the name change cite a study commissioned by the school board last year done by Linda Shay of the Brea Historical Society, which concluded that there is not sufficient evidence to know whether Fanning was indeed a Klan member, and questioned the validity of the list at the Anaheim Heritage Center.

On January 14th, Re-Name Fanning organizers hosted a press conference and invited local leaders, including Fred Calhoun, president of the Orange County chapter of the NAACP, who urged the school board to change the name.

“I’m here today because I don’t believe anything about the Klan that is good. I cannot support that. I cannot support a school with the name of Fanning…We’ve got to get rid of that name, and we’ll take any kind of action that we have to—national action, whatever we have to do. We want that name to come down,” said Calhoun.

Long time Brea resident Julie Ann Muzzall talked about how her grandfather had a tobacco stand on Brea Boulevard next to Neff Cox’s shoeshine stand. Cox was African-American.

“When they were finished with work, my grandfather could walk around the corner to his house…Neff, on the other hand, had to get on a bus at six o’clock and go home to Fullerton to his family. And why did he have to do that? Because Brea was an illegal, unspoken Sundown Town. Who enforced the laws of the Sundown Town? The silent enforcers were the KKK,” said Muzzall, “Our national and local history has not always been equitable or fair. We’ve not always treated all citizens fairly, people like Neff Cox and others…I hope that eventually Brea will learn from their past and change.”

At the school board meeting on the 28th, the chambers were full of people on both sides of the issue who spoke during “public comments.”

“We believe that our grandfather is innocent of these charges,” said William Fanning, the grandson of the school’s namesake, “The lack of proof would compel a reasonable person to deny the petition.”

Jim Bailey, PTA president at Fanning, agreed that the list of Klan members at the Anaheim Heritage Center “has no provenance” and that “the campaign to make Mr. Fanning’s name into a symbol of things outside of his control is unjust.”

Kris Percy, a family doctor in Brea, said that there is indeed evidence that Fanning was a KKK member.

“The list that bears William Fanning’s name has been cited in numerous books and scholarly works,” said Percy, who added that the list was donated by respected local historian Leo J. Friis.

Percy also cited numerous interviews at the CSUF Center for Oral and Public History which, including an interview with Fanning’s son Karl, which document that Brea was a “sundown town” in the 1920s and 1930s.

In fact, numerous speakers held up posters at the meeting with quotes from various CSUF oral histories hi-lighting Brea’s racist past.

Harry Langenbacher read a quote from Ralph Barnes, founder of the Brea Oilfields National Bank: “We had no Negroes, Orientals, or Jewish people.”

Mike Rodriguez, organizer of the Re-Name Fanning campaign, read a quote from Cruz Reynoso, former California Supreme Court Justice who grew up in Brea in the late 1930s and experienced discrimination: “In Brea there were very few Mexican families, 5 of us, so we spoke Spanish at home, but on our sidewalks, we fought in English, we played in English. I remember that in fist grade a teacher was trying to help a little girl who could not read a certain word because she could not speak English, and I improperly butted in and read it for her. That teacher was disturbed and sent me to the principal.”

“What do we know about William E. Fanning?” asked Rodriguez, “We know he was superintendent of schools during the ‘sundown’ era. We know that there were no black or Asian-Americans in those schools…We’re just trying to speak the truth.”

David This said, “It is undisputed by historians that the Klan thrived in north Orange County in the 20s and 30s. During that time, many prominent citizens and elected officials were associated with the KKK, and during that time some towns, like Brea, forced African Americans to leave by sundown. So it’s conceivable that some of our early civic leaders would have associated with the Klan.”

Brea City Council member Steven Vargas, urged the board to keep the Fanning name, and called the effort to remove it “revisionist history.”

One resident suggested putting the question of re-naming the school on the ballot, so the voters can decide.

After public comment, the board discussed the matter. At first, board members Nicole Colon and Keri Kropke said they wanted to change the name, while Carrie Flanders and Paul Ruiz were for keeping the name. Board President Gail Lyons seemed undecided.

Colon said that although she did not believe Mr. Fanning was a KKK member, she was in favor of removing the name for the sake of creating a better environment for the kids and to remove the controversy surrounding the school.

“This problem continues to spread in the papers and the media, and this is not how we want to be known. We want to be known as a city with a world-class school system, not one mired in controversy and problem,” said Keri Kropke, who was in favor of chaining the name, “this is about our children and our future, not our past.”

Carrie Flanders, who was in favor of keeping the Fanning name, said that changing the name would send a message to students that “facts don’t matter.” She said she doesn’t believe there is sufficient evidence that Fanning was a KKK member.

Paul Ruiz, who was also in favor of keeping the name, said that the internet is not the best place to find the truth, and that he has done his research on this issue, and he does not believe Fanning was a KKK member.

Board president Lyons said that this issue has become “about more than Mr. Fanning” and that it “has been used as a lightning rod or a flash point.”

Lyons said that there isn’t a clear solution, but that “our town has some history that we’re going to have to deal with.” She pointed out that the Brea Museum recently got a grant to develop educational exhibits about de facto segregation in the northern and western United States, including restrictive housing covenants and sundown towns.

Flanders nominated the new name Fanning Academy of Science and Technology, and this passed 4-1 (Kropke “no”).

In a statement following the meeting, Mike Rodriguez wrote, “The vote last night ensures that the sundown legacy is alive and well in Brea…The vote last night sends a clear message to students of color in Brea: Just as these communities were not welcome 100 years ago, today, their voices are still drowned out by the wealth and power of the dominant culture in this city.”

“We will continue to educate and equip the residents and students of Brea to address this legacy and the travesty that occurred last night,” wrote Rodriguez.