On President’s Day, February 18, around 200 people gathered at the busy intersection of State College and Imperial in Brea to protest President Trump’s declaration of a “State of Emergency” on our southern border and his attempt to use executive power to secure funds for his controversial border wall.

The Brea protestors joined thousands in cities across the nation who took to the streets to denounce Trump’s Feb. 15 declaration. 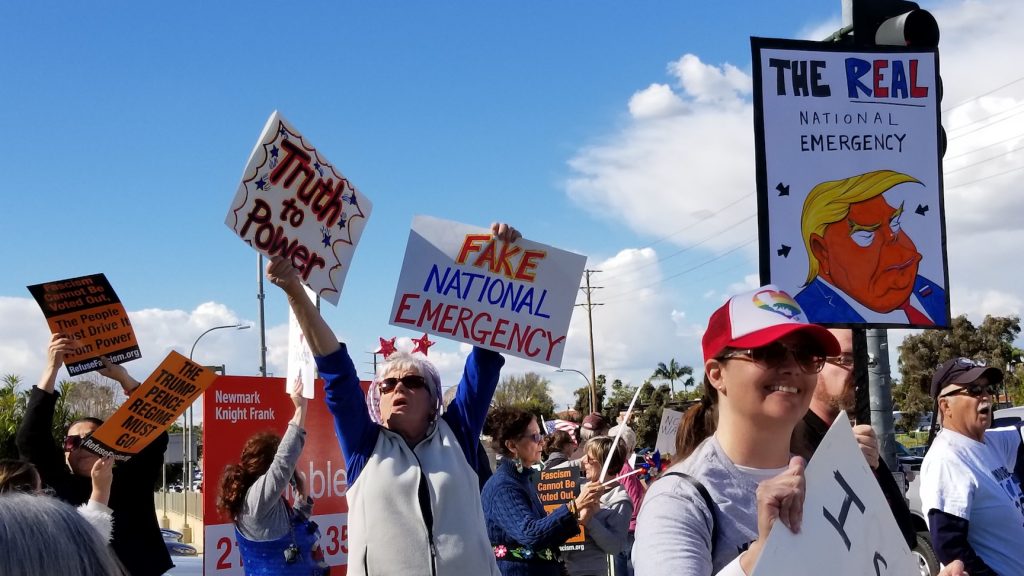 “We are here today in protest of abuse of power by this White House. Congress controls how money is spent—that’s the way it works, and we want to keep the separation of powers,” said Patricia Hanzo, from Indivisible CA-39, one of the organizers of the protest.

Barbara Johnson, from the First Congregational Church of Fullerton, said, “I totally disapprove of what our president is doing, declaring an emergency when it’s actually fake. And we know that he’s off playing golf or whatever he’s doing, so obviously it’s no big emergency to him.”

Johnson, and many of the other protestors, disputed Trump’s claims that building a wall would stop the flow of illegal drugs into the United States, or that illegal immigration is on the rise.

While it is true that a lot of illegal drugs do come into the United States through Mexico, the vast majority of dangerous drugs like heroin are smuggled through legal ports of entry, not in the areas that the wall would span, according to the DEA. You can read the report HERE (the relevant data is on pg. 19).

Regarding the numbers of undocumented immigrants, while it is true that border apprehensions rose from 2017-2018, these numbers are about half of what they were in 2005-2006, and numbers have been on a steady decline, according to the Department of Homeland Security. Check out that data HERE.

“Here’s what the wall will keep out: people who are fleeing extreme violence and extreme poverty in their homelands, trying to survive. The wall will kill them,” said Greg Frichle.

Frichle is not wrong. In the book Beyond Borders: A History of Mexican Migration to the United States, professor Timothy Henderson examines the effect of policies like 1994’s “Operation Gatekeeper,” which added more border fencing. This did not decrease border crossings. It did, however, increase one thing—deaths: “The average number of people who died trying to cross into the US roughly doubled after 1995,” writes Henderson. 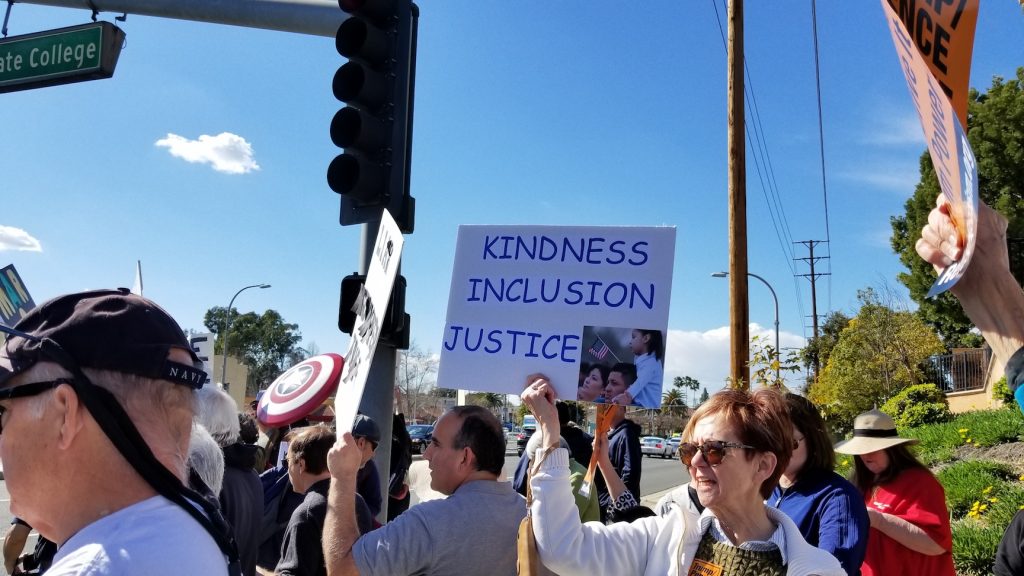 “A wall is not going to solve the problem. It’s just going to spend taxpayer’s money uselessly,” said Sharon Snyder.

This notion of spending taxpayer money on a wall, when the country faces other more pressing crises, was a theme of many of the protestors.

Sharon Speck, who is a nurse, said, “I’m against the wall. It’s a waste of money. The money could be better spend on feeding people, housing people, education, health care, a lot of things.” 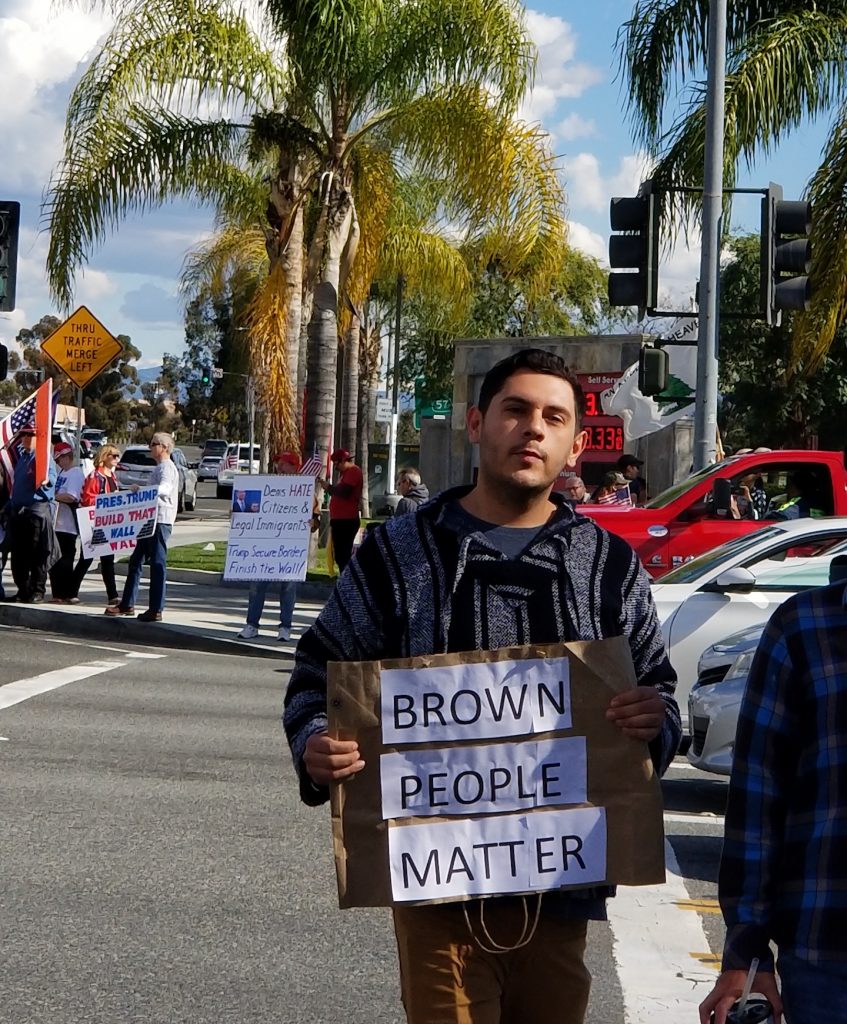 For other protestors, Trump’s rhetoric surrounding the wall smacks of racism.

“I’m Mexican. I’ve been here all my life, and this has been going on for a lot of years, this racism. And these racist policies are against people like me—I’m brown,” said Martha Delgado, who said she was happy that California Attorney General Xavier Becerra has filed a lawsuit against Trump’s emergency declaration.

Across the street from those protesting Trump’s declaration, a smaller counter protest gathered, with people chanting, “Build the Wall! Build the Wall! Keep Out the Drugs! Deport them all!”

It’s not just unacceptable. It’s also false. Also, according to a study by the CATO Institute in February of 2018, native-born citizens are more likely than immigrants, whether here legally or illegally, to be convicted of a crime. 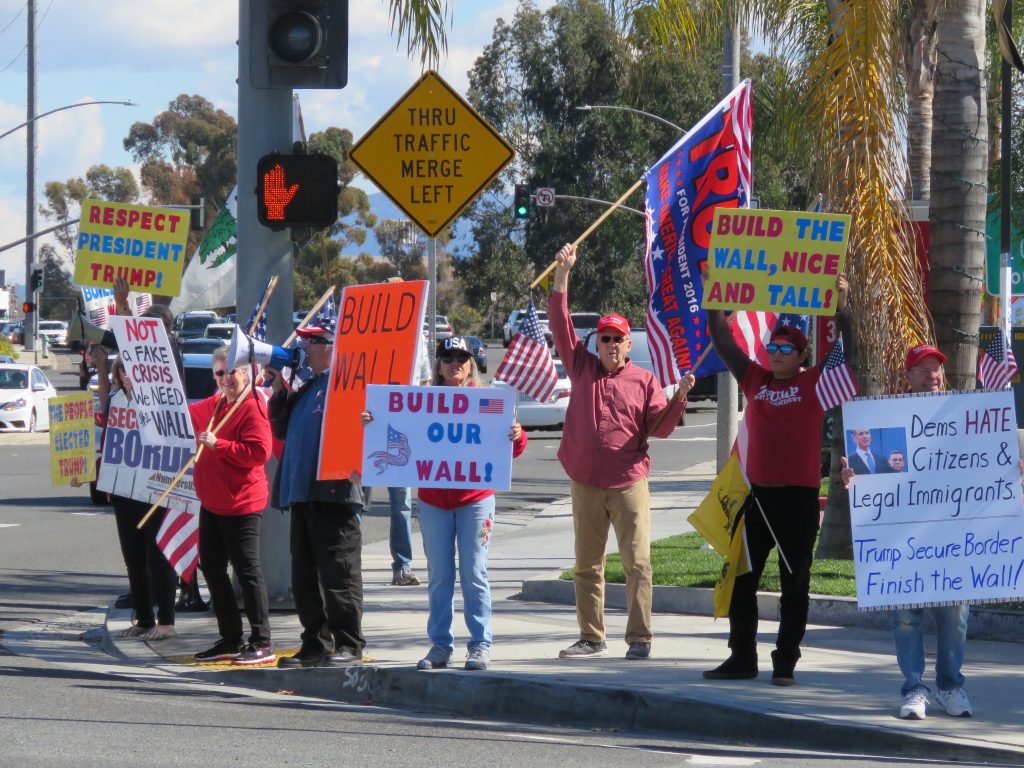 “We’re having an invasion, as you know,” said one counter-protestor, “And we would like the wall to be built.”

The large protest and smaller counter-protest continued throughout the afternoon with cars honking as they drove by, and the occasional argument.

“It’s President’s Day. Today we’re supposed to honor the Presidents who lead and serve us. This is not happening right now, and I wanted to be part of reminding him and everybody that we can do better,”  said Belle Sprague. 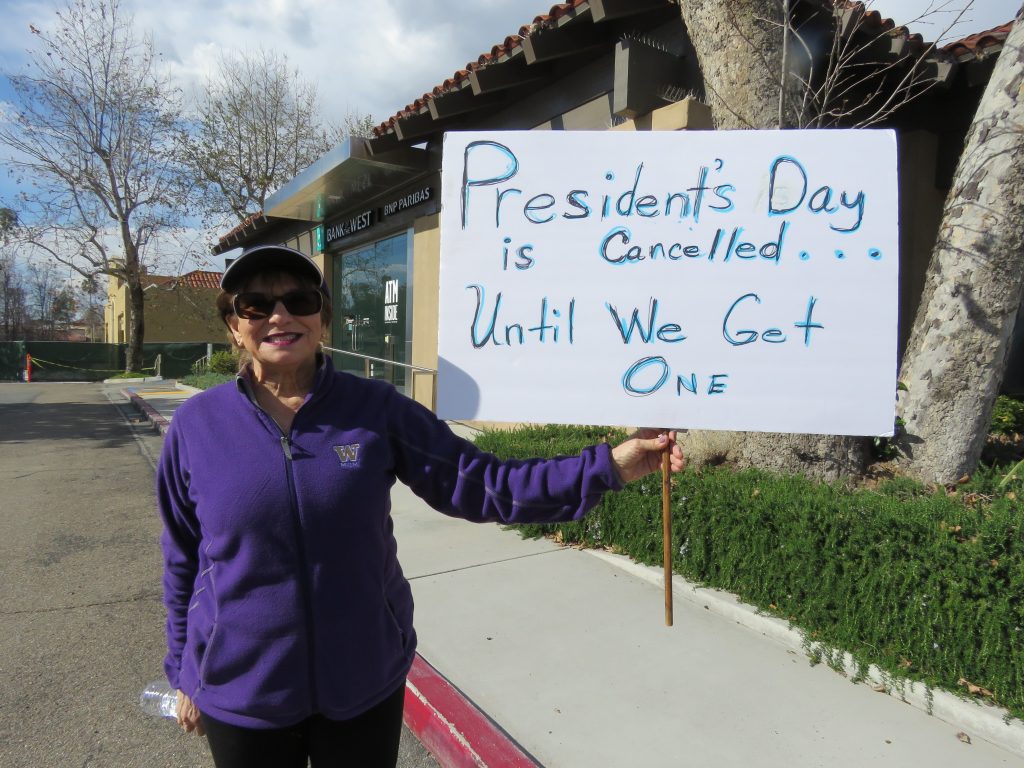