At the February 5th City Council meeting, Library Director Judy Booth presented council with the report created by the Library Ad Hoc Committee (LAHC) identifying and prioritizing future potential uses of the Hunt Branch Library.  Their report is meant to serve as a framework for the solicitation of a Request for Proposals (RFP) from programming partners.

Since 2013, the Hunt Branch Library has been closed as a library and is currently being rented out to Grace Ministries International. In recent years, councilmember Jennifer Fitzgerald and former Mayor (now OC Supervisor) Doug Chaffee supported selling the Hunt; however, community activism on the part of groups like Save the Hunt have revitalized efforts to re-open the Hunt as a public resource. 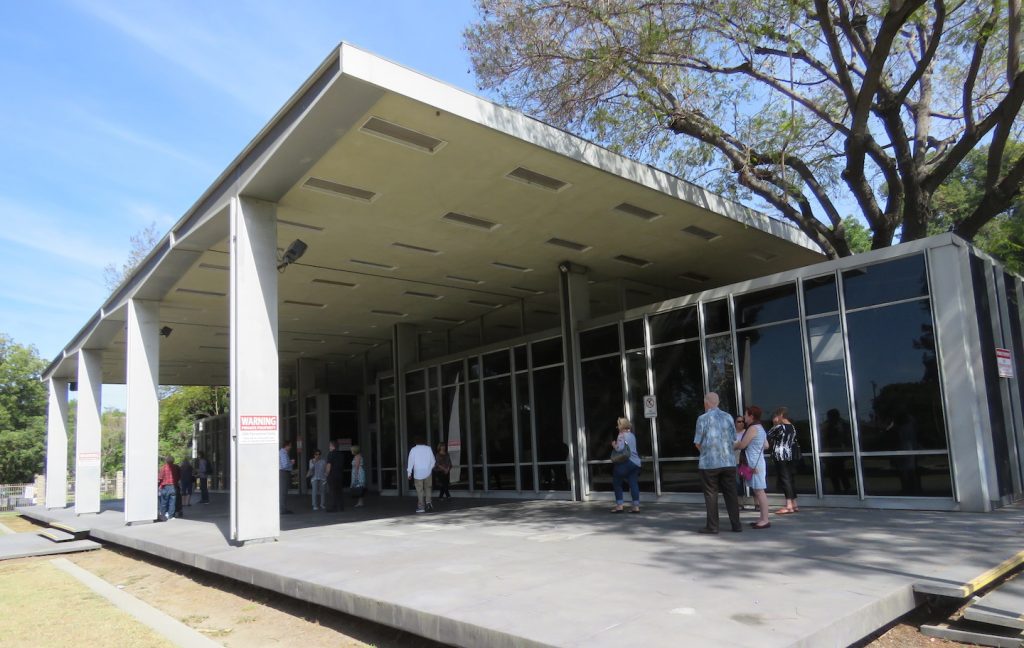 The Hunt Branch Library was donated to the city of Fullerton by Norton Simon’s Hunt Foods Foundation in 1962. The unique building was designed by famous mid-century architect William Pereira, whose other projects include the Transamerica building in San Francisco and the Geisel Library in San Diego.

The California State Historical Resources Commission recently approved the Hunt Library, declaring it eligible for listing on the National Register of Historic Places.

This was due to the careful research by Debra Chi of the group Fullerton Heritage. Also, the Save the Hunt group provided forums on the mid-century architecture of the Hunt Library with renowned architectural historian Alan Hess.

The LAHC report prioritizes future uses of the Hunt in the areas of:

The LAHC report also identified several funding-related questions and includes a list of potential grant opportunities as well as a list of organizations in which to distribute the RFP for possible partnership opportunities.

“The restoration and revitalization of this architectural treasure provides Fullerton with a unique opportunity to rebuild and strengthen a sense of community and belonging in our diverse and remarkable city. We envision the possibility of a renaissance of literacy in its broadest sense for Fullerton, our education community,” said Molly McClanahan, who was on the LAHC.

Egleth Nuncci, also a member of the LAHC, said that keeping the Hunt a cultural center is a great option.

“We can get grants, we can get foundations on board. Please listen to the community and give us that opportunity to create that for our children and our families,” said Nuncci.

Ellen Ballard, who is on the Library Board of Trustees, said, “We endorse the goals presented by the ad hoc committee and we agree with their first priorities emphasizing a broad spectrum of literacy programs. This priority would include art, culture, museum uses, events, activities, and classes which would benefit the Fullerton community. This vision is in perfect alignment with the mission, philosophy, and objectives of the Fullerton library and the donor’s original intent for this gifted library.”

Ballard also suggested, on behalf of the Library Board, that the council “select a preferred use from the broad spectrum of potential primary uses offered by the ad hoc committee.”

“Without the council weighing in to narrow the field of uses, the effort to rededicate the Hunt Branch library may stall or fail,” said Ballard.

Ballard added that the city needs to figure out a way to refurbish and enhance the bridge leading to the library’s front door: “This may need special attention, and we suggest the council encourage our state legislators to include such a project in potential funding requests from Sacramento.”

Jane Reifer, representing the group Save the Hunt, said “our mission is to keep that building in the public realm for community use” and thanked both Fullerton Heritage and the LAHC for their great work toward this effort.

“The key to any solution the city may have for the Hunt is going to be with Programming Partners and Funding Partners,” said Reifer.

Curtis Gamble, who is on the Continuum of Care Board (which has a $24 million per year budget to help the homeless) said that the Hunt Library should be used as a homeless shelter.

He pointed out that the Armory shelter is set to close soon, and people will soon have nowhere to go in Fullerton. He also cited federal Judge Carter’s desire for all cities to at least open up a 50-bed shelter.

“We have the money, but we’re still being ignored and not listened to, not listened to by the ad hoc committee, totally ignored, wouldn’t let me participate on the committee, and then wouldn’t even listen to our suggestion—very very mean to the homeless people,” said Gamble.

Council Member Jan Flory, who was also a member of the LAHC called the Hunt “an asset the city has that we cannot afford to lose.”

Flory made a motion to create a “study session” to fine tune the priorities for the Hunt. This was seconded by Mayor Silva.

Council Member Whitaker, who supported the motion, thanked the LAHC “who worked diligently in those four sessions and a lot of time in between to get us to this point.”

Whitaker said the Hunt “could be brought back to its former glory, or even better glory than it ever had. It would be a representation of historical significance that would only gain in value over time.”

Council member Zahra suggested that the city should also consider having an educational center for special needs at the Hunt.

Mayo Protem Fitzgerald, who has previously said she favored selling the Hunt, said “I’m hopeful that, however we end up writing that RFP, there can be a preference for service providers that can make a special effort for specifically the underprivileged neighborhoods in our city.”

Council voted 5-0 to schedule a study session on the Hunt Library in the coming months.