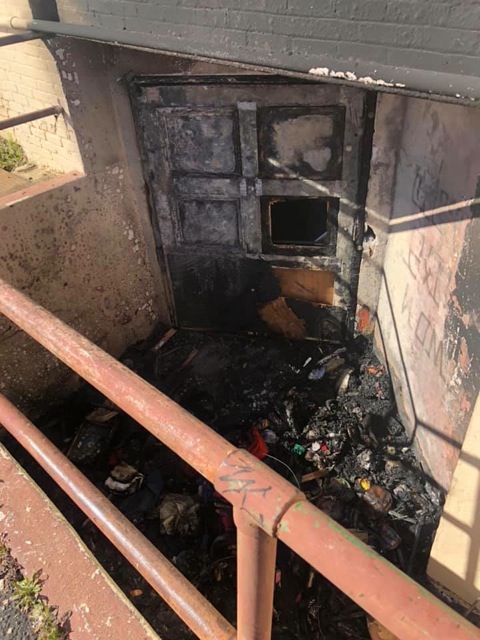 Above: photo of the exterior damage, in the stairwell just outside the east door of the Fox where a homeless person had been camping out.

Fullerton/Brea Fire Division Chief/Fire Marshal Kathy Schaefer said the initial call on the fire at the Fox Theater on Saturday, February 23rd was placed by people walking by the scene. The fire was up against the east side of the structure, next to the door by the stage. There were no homeless people on the scene at the time of the fire department’s arrival.

When Fire Engine #1 arrived on scene they reported heavy smoke showing from the rear of the structure. Additional fire crews were called in and FPD was requested for traffic control. Eventually 4 fire engines, 2 fire trucks, and two battalion chiefs were assigned to the incident (26 to 28 personnel in all).

The report reads “Fire Attack reported an external rubbish fire with no extension into the structure. A sprinkler had activated just inside the affected door and held the fire in check.”

Moderate smoke was reported inside the structure. Fire crews inspected the building to make sure the fire was completely out and the building owner arrived on the scene and was given a report. No one was injured in the fire.

According to the Fox Theatre Foundation it is thought that the fire was started by a homeless person camping out in the space just outside the east door at the back of the theater.

The Foundation was aware of the homeless man and the mess he had created in front of the door. Foundation Board President Leland Wilson said, “Bob
WInklemann on our board had been trying to get the FPD homeless liaison guys
to remove the homeless person and his mess at the door where the fire was
started for a couple days prior to the fire event. We were in the process of
locating a place to dump the stuff ourselves to get it cleaned up..but the
fire beat us to it.”

According to Wilson there have been at least a dozen break-ins at the theater. “One night I went in and there was a bed, a pile of charcoal lit with red potatoes
in it (and a pile of feces about 10 feet from that)” Wilson said.

“We seem to have gained the upper hand on break-ins,” Wilson said. “The fire was not a break in..it was a trespass for sure. But it was exterior as you know.”

These photos of the damage were posted on Feb 24 on the Fox Theatre  Fullerton Facebook page with a description of the damage. According to the post only one inside sprinkler went off and damage was minimal.

Wilson said that the damages are so slight that it is not worth filing for insurance. He says the crew can clean it up. Future renovation plans are expected to secure the building from any further intrusion.

“The building is alarmed and connected to the FPD. Windows have been boarded up after having literally been broken to enter. We are in the process of replacing the boards with new glass. In the next $2.6 million renovation phase new exterior doors will be installed that will protect against any smoke entering the building in the case of another fire like yesterdays,” said Wilson. 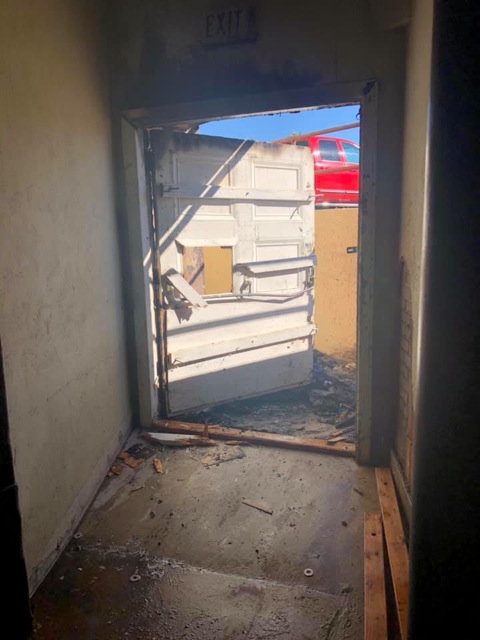 Above: Inside the east door back entrance where some smoke damage occurred.

Below: A scorch mark from the fire in the stairwell can be seen up the side of the building above the east door of the Fox Theatre. 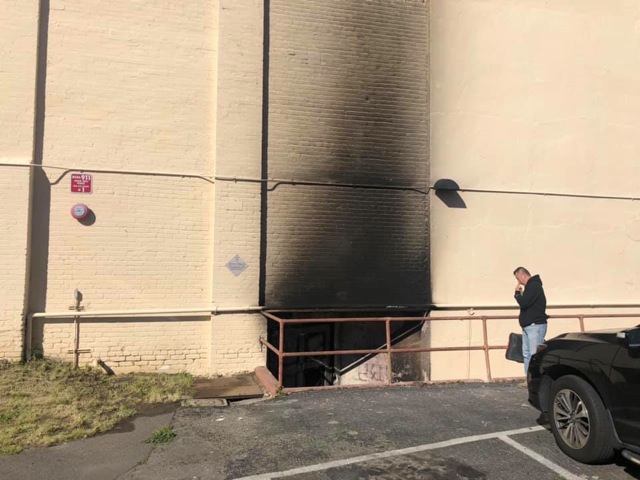 Police and Fire crews responded quickly and had the fire out within the hour.

The next phase of renovation of the Fox, located at the corner of Harbor and Chapman in downtown Fullerton, will include restrooms and other features gaining the theater “partial occupancy” which will allow for more events to be held there. While it won’t mean the theater will be open – hosting more special events at the Fox is expected to help boost funds for the final push to opening the theater.

(the originally posted version of this article incorrectly identified the photos of damages to be on the inside of the theater.)