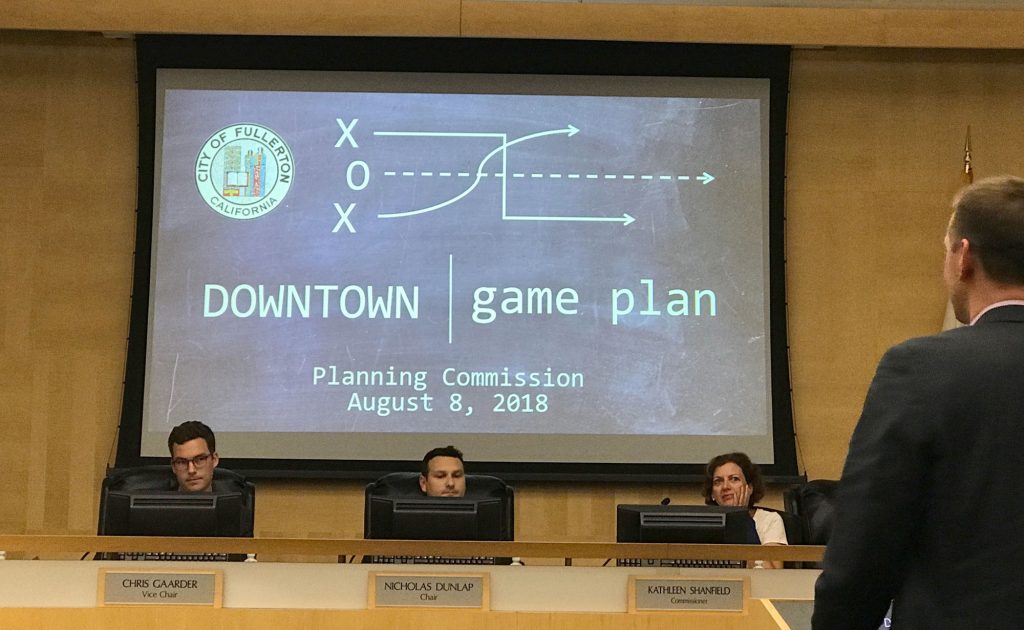 The City began working on the Downtown Game Plan last year with the first presentation before the Planning Commission in August.

In an effort to deal with the numerous problems created by the late night downtown scene Fullerton Community Development Director Ted White presented to the Planning Commission a series of proposed new regulations for downtown bars at the February 27, 2019 meeting.

White characterized the proposed regulations as “A reset of restaurant regulations, one component of the Downtown Game Plan.”

The new regulations apply to businesses that serve alcohol. The last revision of these regulations was in 2008, commonly known as “the alcohol ordinance” which was a reaction to a 2002 restaurant overlay district ordinance.

The proposed ordinance modifies both the applications for Conditional Use Permits (CUP) and Administrative Use Permits (ARUP) as well as some enforcement methods. All restaurants that serve alcohol and have entertainment must obtain a CUP as well as an Entertainment Permit.The proposed changes include requiring each restaurant to have a security operations plan approved by the Fullerton Police Department (FPD) and the Community Development Department (CDD); allowing ambient music on patios until midnight; banning promoters to operate events; permitting a cover charge after 10pm; eliminating the queuing restriction by a number – judging the restriction of the public right-of-way instead; requiring each server to have responsible beverage training; requiring the posting of a notice regarding limitations on serving alcohol to intoxicated persons; removal of graffiti within 24 hours; and clean-up of trash and debris within 25 feet of the premises as part of the closing process.

Further, restaurants shall not offer drink specials nor require a minimum number of drinks to be ordered. Rules for micro-breweries are also clarified.

Director White noted that ARUPs and CUPs are land-use permits, and once granted, may continue at each location. However, Entertainment permits are issued by FPD and must be renewed each year. Interim Police Chief Bob Dunn said that entertainment permits, per Chapter 3.08 of the Municipal Code, are for dancing, live music by three or more performers, disc jockey presentations and karaoke.

Chief Dunn explained the proposed three step enforcement process which will begin with a “remedy meeting” with the chief and other applicable departments. If necessary, step two is a restriction of entertainment hours, and step three is a more extreme limitation of hours. He said that in Long Beach, where this process is in force, the first step serves to cure the problems.

Adapting to the major changes will require a licensee to apply for a new CUP or ARUP, and the city will waive fees for such applications for the first year after adoption of the ordinance. If a new permit is not applied for, White said, “We will enforce the existing permit.”

White emphasized that “Enforcement is a large piece of any regulatory requirement. Proactive enforcement is the key to successful implementations of new regulations.” There has been a lack of enforcement downtown, he said. He recommended having a dedicated staff position in the FPD and a dedicated code enforcement officer for downtown to assure consistency in enforcement.

Commissioner Kathleen Shanfield questioned use of the word “may” in many regulations. “I want teeth in this,” she said. After discussion among commissioners and staff, it was agreed the language would be changed where appropriate.
The Planning Commission recommended passing the proposed ordinance by unanimous vote with some tightening of the language – replacing “may” with “will” in some instances, and excluding the portions relating to noise regulation.
The noise regulations portion of the draft ordinance was severed from consideration by the commission because of legal objections submitted by Sean Paden from Hammons & Baldino, LLP, representing Bushala Brothers, Inc., to notice CEQA requirements, Noise regulations will be considered at a yet-to-be scheduled hearing.

The owner of the Eighty Eight Cigar Lounge said enforcement is good. Cameron Irons, real estate agent, said owners should get together to figure out how to make more money selling food than selling alcohol.

Former planning commissioner Ryan Cantor cited 757 incidents of crime downtown including 92 DUI’s and 100 public urinations, stating that downtown Fullerton is “a public nuisance.” He noted that one establishment was the source of 15 DUI’s and 25 fights. He recommended it be shut down.

Joshua Ferguson said, “It’s a great plan for the bar owners, but not for other businesses or residents. There is no staff to enforce regulations. We already have to balance our budget by selling property or reducing staff.” He said there were 633 DUI arrests in 2018, an average of 1.7 per day.

Jack Franklin said, “I thank the boys. I think they’re going in the right direction. I talked to Ted today. A complaint I have is about the cleaning up.
Half the businesses on Santa Fe do not have trash pickup. And there are the homeless. Other than that, we support it,” Franklin said.

Craig Voorting said he likes the proposed ordinance “..because it has actual teeth in it. There are no teeth in the current rules.” He said his was the 13th restaurant downtown, that he makes money selling food, “…better than selling alcohol.”

Joe Florentine said “Ted and Matt put together a good plan. We provide you with food and drink and hospitality. Many of us do good. We donated 760 pounds of food last year, and have cooking classes for high school and Crittenden students. We donate a lot…we are normal people like you. This is what we do for a living.” He said there was drinking in cars, smoking “weed,”, that Fullerton is a college town with five universities. There is too much whining and complaining, he said. “You live in Fullerton. If you don’t like it, go to Podunk, go somewhere else.”

Christopher Gaarder, chair of the commission, said, “This isn’t going to solve the downtown’s problems. With a maximum two story downtown, no wonder we have only bars. When you only allow two stories you’re asking for that.” The city decided they want a lot of restaurants so we got a lot of restaurants. People don’t like it. I get it. It’s [the ordinance] probably not perfect but an improvement.”