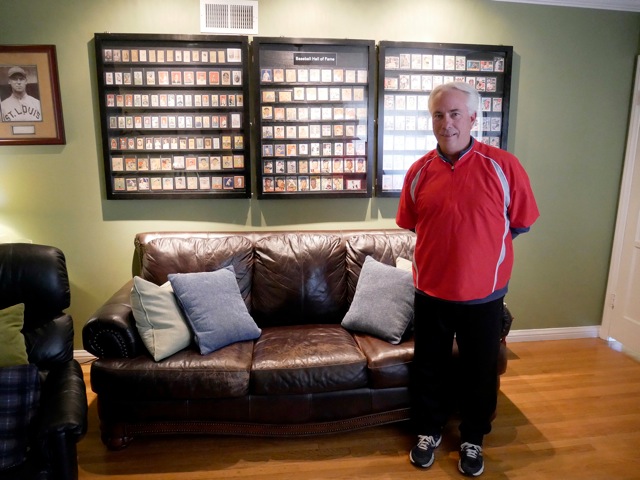 Before the 2019 baseball season began spring training, I received an email from David Brunelle, a long-time Fullerton resident with his very own Baseball Hall of Fame. Back in 1994, Mr. Brunelle and his oldest son, Sean, were playing at West Fullerton Little League. After one of their games, Sean asked his dad to take him to a local baseball card show so he could buy cards of his favorite player, Ken Griffey Jr.

“So we went to the show. While he was looking for his cards, filtering through a bunch of boxes, I wandered over to another table and noticed that there were some cards from when I was kid,” Mr. Brunelle said. He found familiar faces from the 60s and 70s and was once again enthralled with the cards from his youth. Little did he realize that this would be the start of a 25-year challenge to collect one card of every player in the Baseball Hall of Fame.

“I was just knocked over by how much I enjoyed my old baseball cards,” he said. “My son bought a Griffey Jr. and I bought a Ted Williams card from 1951. We went to a few more card shows. He picked up a few more cards. I picked up a few more cards. And it got to the point where I said, ‘Hey, a lot of these guys—Willie Mays, DiMaggio, all these great players—are in the hall of fame. Why don’t we start collecting one card of every player in the Baseball Hall of Fame? That was 1994 and I’ve been collecting ever since.”

Mr. Brunelle invited me to his house to see his collection in person. His den with the Baseball Hall of Fame almost seemed like a museum. Every baseball collectable occupied its own case and its own section of the room. “As a kid, most of us from the sixties and seventies collected baseball cards – when they weren’t being put on the spokes of our bikes to make the noise,” Mr. Brunelle said, “I wasn’t an avid collector at all. It was just fun to have them around.”

Mr. Brunelle’s collection, consisting of 230 cards, is still missing two cards: Ben McPhee and Deacon White. They’re two players from the 19th century who are very difficult to find. He said, “When you do find them, they’re really, really expensive.” Most of the other cards in the collection have been bought through auctions, Ebay, and local card shows and businesses.

The rarest and most expensive card he owns is the Ed Delahanty card from 1895. “A lot of these cards from the 1880s are getting more and more difficult to find,” he said, “They’re not all in perfect condition. The cards that I like are hard to find, but the price and the value has gone up substantially because baseball cards are not about who, they’re about the rarity. It’s about how many of those cards are left out there.”

Mr. Brunelle is the sole family member still collecting cards. “Nobody in the family is collecting cards, but everybody in the family wants to know where they’re going to go when I’m gone,” he said. “So, I’m hoping that my kids will see the value and the fun of continuing on with the project of every time there is a newly elected player, let’s put a card into the box.”

The card that means the most to Mr. Brunelle is the 1960 Roberto Clemente because his sons put their money together one Christmas about ten years ago and bought him a really great condition Roberto Clemente from 1960. His sons bought it from Tom Elliott at Past Times Collectables.

Along the walls are baseball memorabilia that all have a special place in Mr. Brunelle’s heart. In fact, he has a program from Fenway Park, July 20, 1969, the very first baseball game he ever went to. “This is a program that I searched ten years for on Ebay to try to find the program of the game I was at, my very first one when I was twelve-years-old,” he said.

“What’s significant about that? First man on the moon landed the day I was at that stadium, July 20, 1969. It was about the fifth or sixth inning and they stopped the game. The announcer said, ‘An American man has just landed on the moon.’ And everybody stood up in the stadium and they played the Star-Spangled Banner. That was my very first professional baseball game.”

All five of Mr. Brunelle’s kids and his wife have been to Fenway Park. He has photographs from when he took his kids to Fenway Park hanging on his wall. Sitting next to the photos is a picture of Babe Ruth with Babe Ruth’s actual signature on a two dollar bill. In the corner of the room, there is a Ted Williams piece that was given to Mr. Brunelle as a present from the folks at the company he worked at for twenty-five years and a photograph of one of his favorite players and hitters from the old days, George Sisler of the St. Louis Browns (before they were the Cardinals).

Hanging above his mantel is a photograph with a signature from Sandy Koufax, along with a pennant from the 1963 World Series and a Ty Cobb autograph. He said, “Ty Cobb signed a lot. There’s a lot of fakes out there, a lot of people fake autographs because they can make money. The best way to determine if something is real is to get a PSA graded item and a signed check is very authentic.”

There are three members in Mr. Brunelle’s Baseball Card Hall of Fame who are actually from Fullerton and have Fullerton roots. “One is the great Walter Johnson, who went to Fullerton High School,” he said. “Another one is a gentleman named Arky Vaughan, who also graduated from Fullerton High School and played in MLB in 30’s and 40’s. The other one is Gary Carter, who went to Sunny Hills High School, and played in the same Little League as my son and me–West Fullerton Little League, and he was a big star everywhere he went. And there’s a fourth. He’s not in my cage here because he’s a manager and I try not to put managers in here, but the other Fullerton resident is Tommy Lasorda, the Dodger manager who lived in Fullerton for years. So four Fullertonians are in the Baseball Hall of Fame.”

Every year, in January, the newest members of the Hall of Fame are announced. “I have cards of players who I believe someday will be in the Baseball Hall of Fame,” Mr. Brunelle said, “I’m collecting their cards now because what happens is that when they’re elected, their prices will go straight through the roof. So, buy those cards now. They’ll be worth money in the future and they’ll go into my wall someday.”