On Saturday afternoon, March 9, the Muckenthaler Cultural Center hosted an opening reception for its latest art exhibit, “Protecting Mother Earth.” Curated by artist Rowan Harrison, the show explores the protection and conservation of our natural environment from the perspective of Native American artists.

The show began with a blessing and song by Adelia Sandoval of Juaneno Band of Mission Indians, Acjachemen Nation, the original inhabitants of south Orange County.

“We honor our Mother Earth, and call her Tamáayawut, and may we all walk gently upon her this day,” Sandoval said, “And let us always remember that what we do this day we do for the generations to come.” 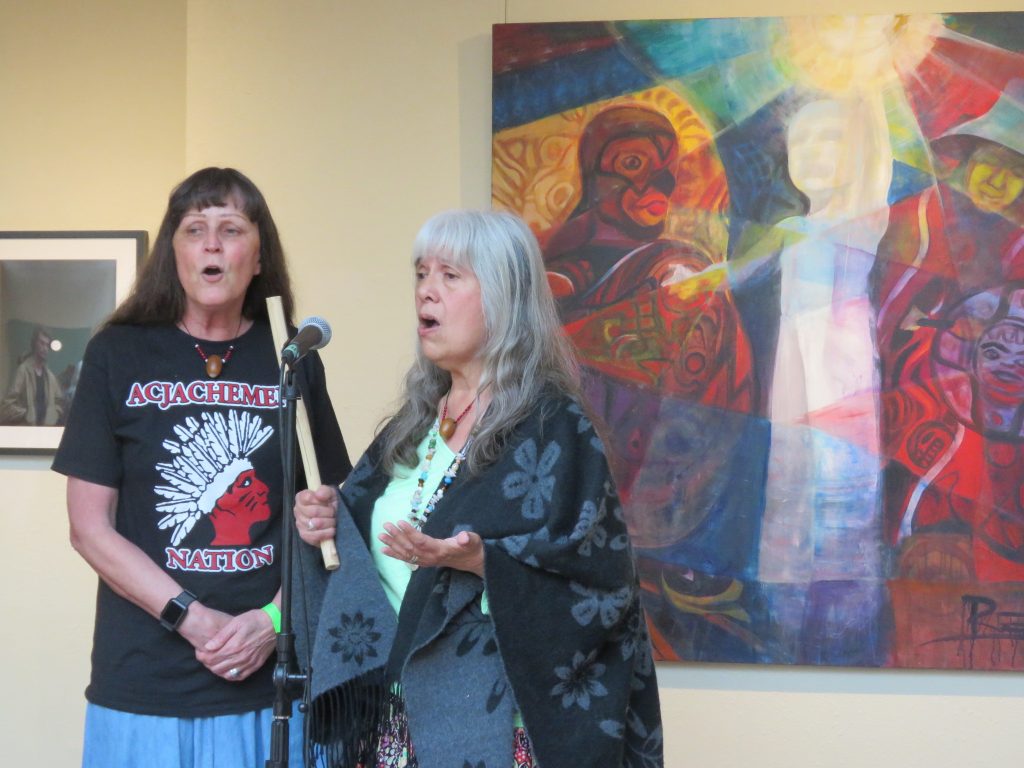 Members of the Acjachemen tribe sing songs in their native language.

Harrison, who is half Pueblo of Isleta and half Navajo, teaches Native American pottery at the Muckenthaler. He said he wanted to curate a contemporary Native American art show in Orange County because there haven’t been many.

He was also inspired by current environmental crises like climate change, and the unique perspective that native voices can bring to these discussions.

“Indigenous people, whether it be North, Central, or South America, we all have this unique relationship with nature, with Mother earth. The way we think, the way we feel, our religion, our heritage, our ideas, our way of life is all intertwined with Mother Earth. And I just felt it was really important to have an exhibition, an art show, that has imagery that reflects those ideas and images,” Harrison said. 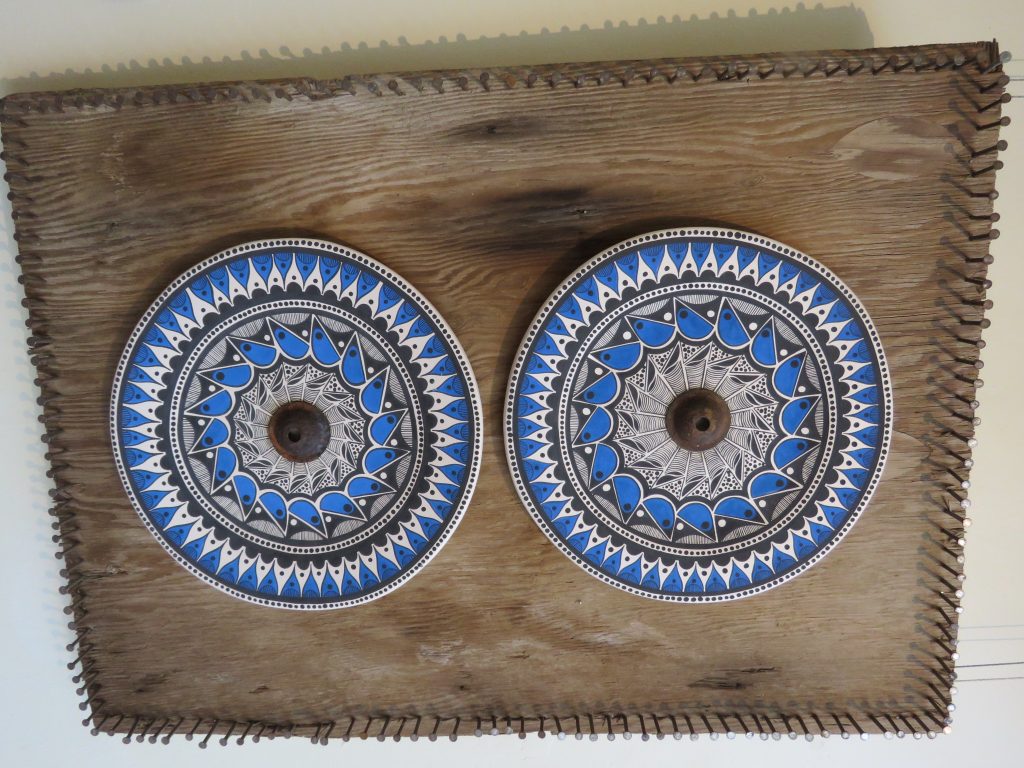 “Native American people now have to kind of make that balance between living in a very traditional way, which is living in accordance with the rhythms of Mother Earth, and also living with technology and industrialization,” Harrison explained.

Artist Corey Stein, whose ancestry is of the Tlingit people of the Pacific Northwest, also creates mixed media works which speak to humans’ tenuous relationship with nature.

She created a series of works relating to a forest fire around the Grand Coulee Dam in Washington, which is on an Indian reservation. Official sources claimed the fire was caused by a grasshopper who had been incinerated on an electrified fence.

Her humorous works, which incorporate imagery from a Smokey the Bear comic, poke fun at the notion of blaming nature for what was very likely a manmade disaster (What was really at fault—the grasshopper or the electric fence?) 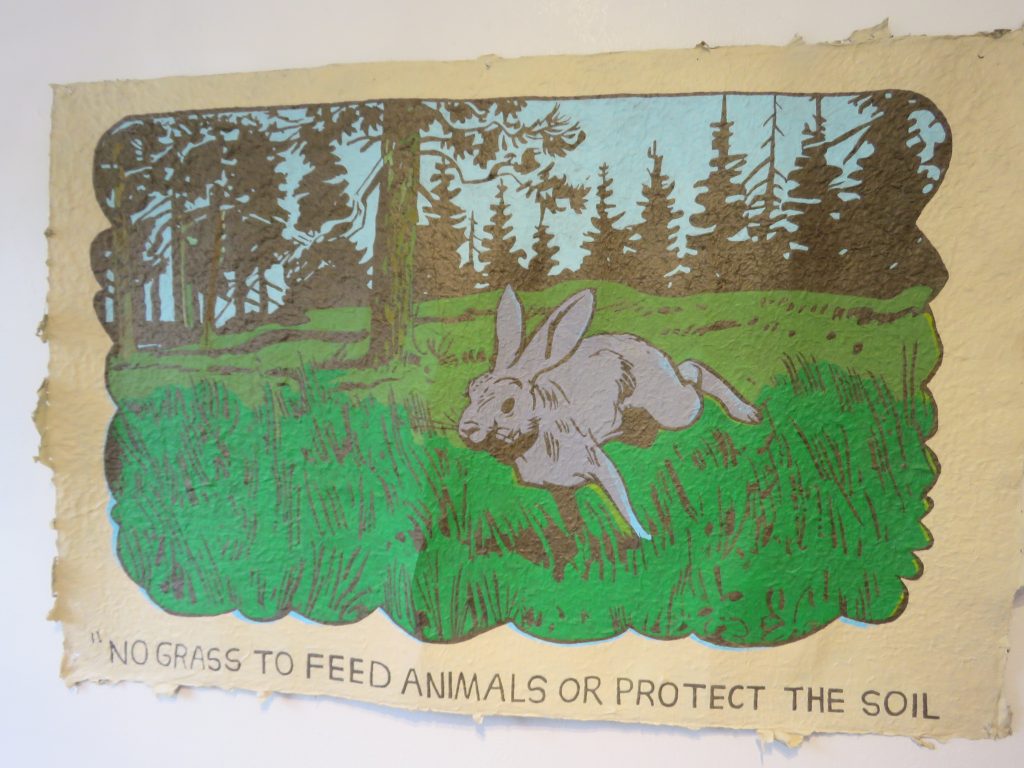 “The Grass is Very Dry in This Country” acrylic on rag paper by Corey Stein.

The lyrical paintings of Gail Werner, who is of Cupeno, Luiseno, and Kumeyaay ancestry, reflect the flora, fauna, and landscapes of her peoples ancestral homelands in Southern California, particularly the Anza-Borrego desert and Warner Hot Springs.

Werner’s paintings, like “Clam Shell Wash” reflect an evolving landscape. What is now a desert (Anza-Borrego) was once an ocean, as evidenced by the presence of the clam shells.

Speaking with Werner, I learned that the story of her people (one of California’s smaller tribes) is one of both beauty and loss. She is inspired by the “bird songs” in her peoples’ native language; however, the language itself, like many California native languages, is mostly lost. 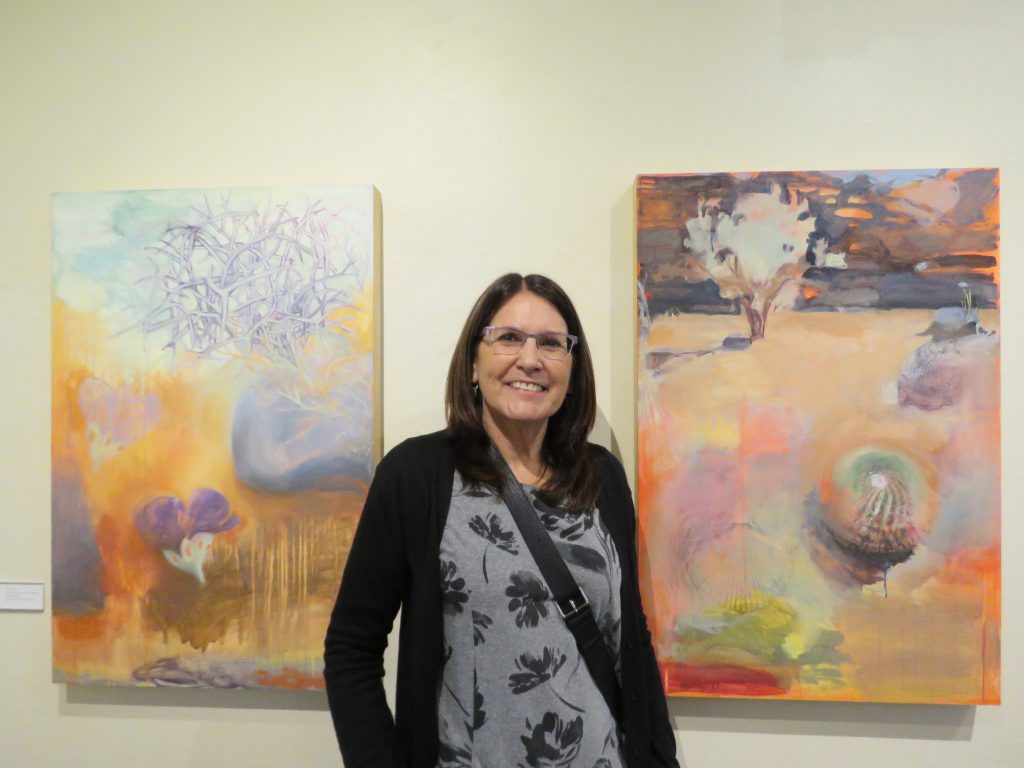 This was due, in part, to a particularly tragic chapter in American history in which native children, like Werner’s mother and grandmother, were forced to attend “Indian Boarding Schools” like the Sherman Institute in Riverside, where they were forbidden from speaking their native language. Because of policies and institutions like this, many native languages were lost. Now they survive only in certain songs, like the “bird songs.”

For artist Laurie Steelink, her work is a way for her to re-connect with a native identity that she’d been cut off from. Her birth mother from the Akimel O’otham (otherwise known as Pima) tribe, gave her up for adoption, and Steelink was raised by white parents.

She attended the San Francisco Art Institute and got “a very Euro-centric” art education. Then, at age 40, she met her birth mother and all of her native relatives, which put her on a path toward re-discovering her native roots, which is reflected in her artwork. 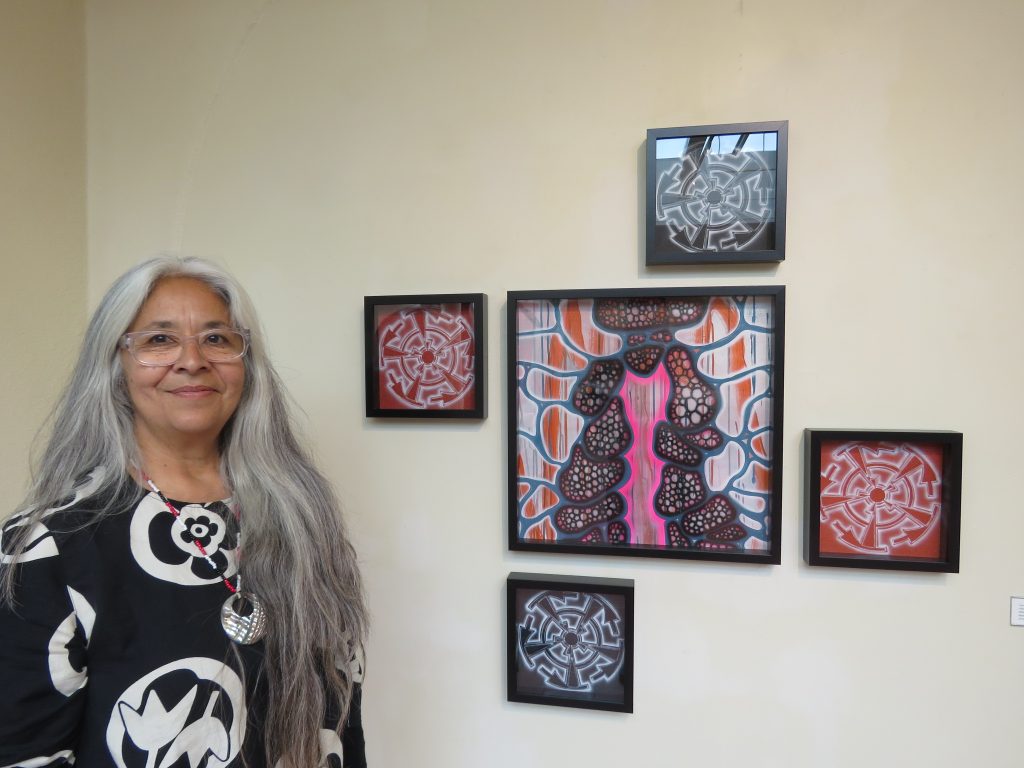 Steelink, who now runs an art space in San Pedro called Cornelius Projects, has used her space to help give voice to other native artists. She also helps organize the annual Many Winters Gathering of Elders in San Pedro, which brings native leaders from around the country  “to come and speak to LA’s indigenous population, to learn about what’s going on on their lands, what’s happening worldwide, and ways in which we can function better as human beings on Mother Earth,” said Steelink.

“Protecting Mother Earth” contains a nice balance between beautiful images and images of resistance and protest in defense of the land and the earth.

The photographs of Zoe Urness and Peggy Fontenot of the Standing Rock protests against the Dakota Access Pipeline strikingly demonstrate that the struggle by native people to protect Mother Earth continues to today. 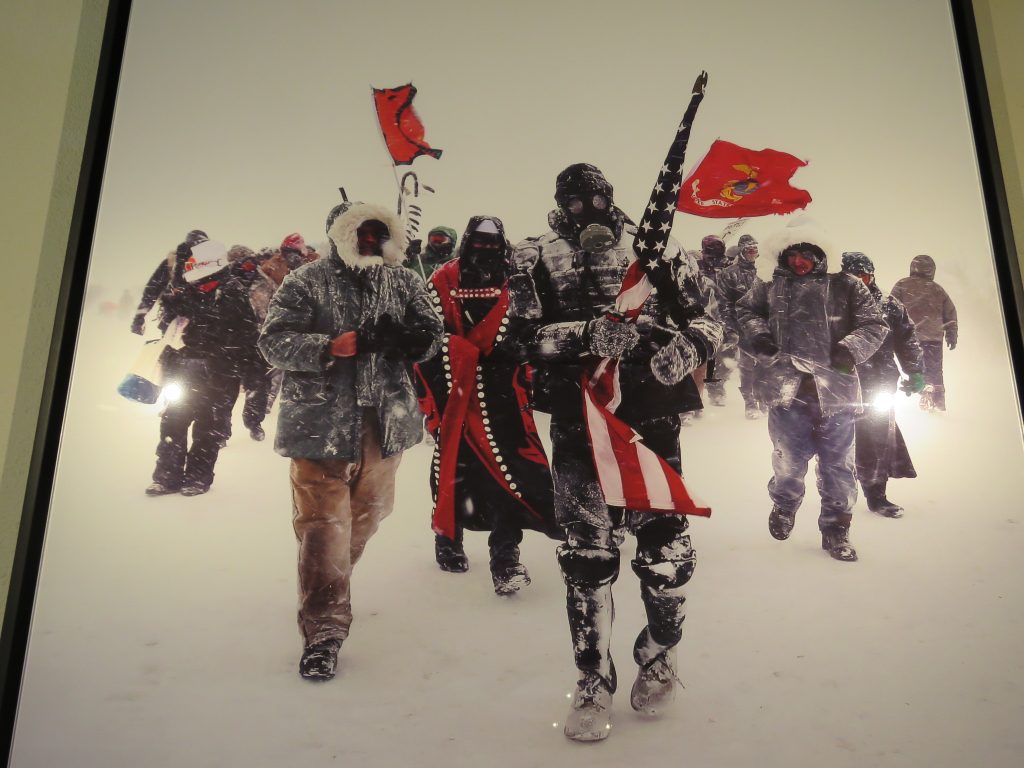 The illustrations of Amy Redfeather, who is a member of the Luseno Pechanga band of Indians, depict Tamáayawut, the earth goddess/mother of her people.

“This series of goddess/earth mother, who is pregnant, shows the connection of what it feels like to be a mother, to understand what it is to care for your young. And thinking about our planet, how we are a part of our mother, in the sense that we are her [mother earth’s] young,” said Redfeather. 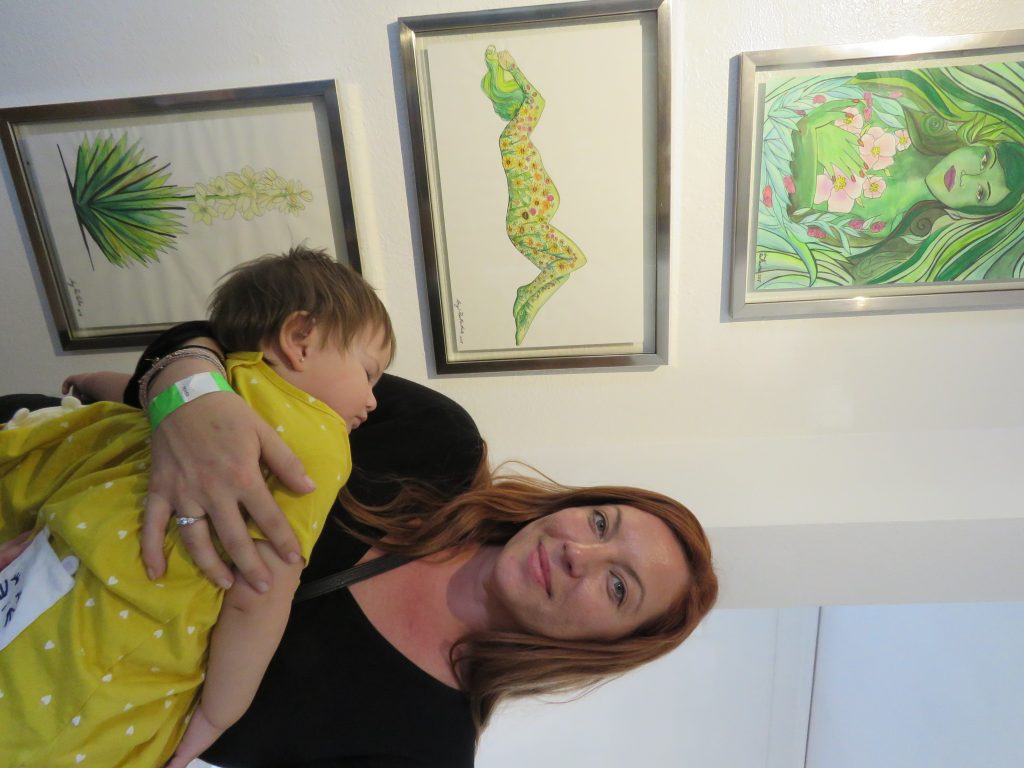 Upon entering and exiting the exhibit, visitors were greeted by artist Kat High, who helped create Neshkinukat—a network to help connect and support native artists in (mostly) Southern California.

She was passing out small “tobacco ties” which are often given as offerings and prayers. The ties came in four colors: green (for the earth), red (for the people), blue (for the water), and white (for the sky).

Leaving the exhibit, I took a blue tobacco tie.

“I want to take a blue one for water,” I said, “We have some water issues here in Fullerton, some contamination. So, I’ll take a prayer for the water.” 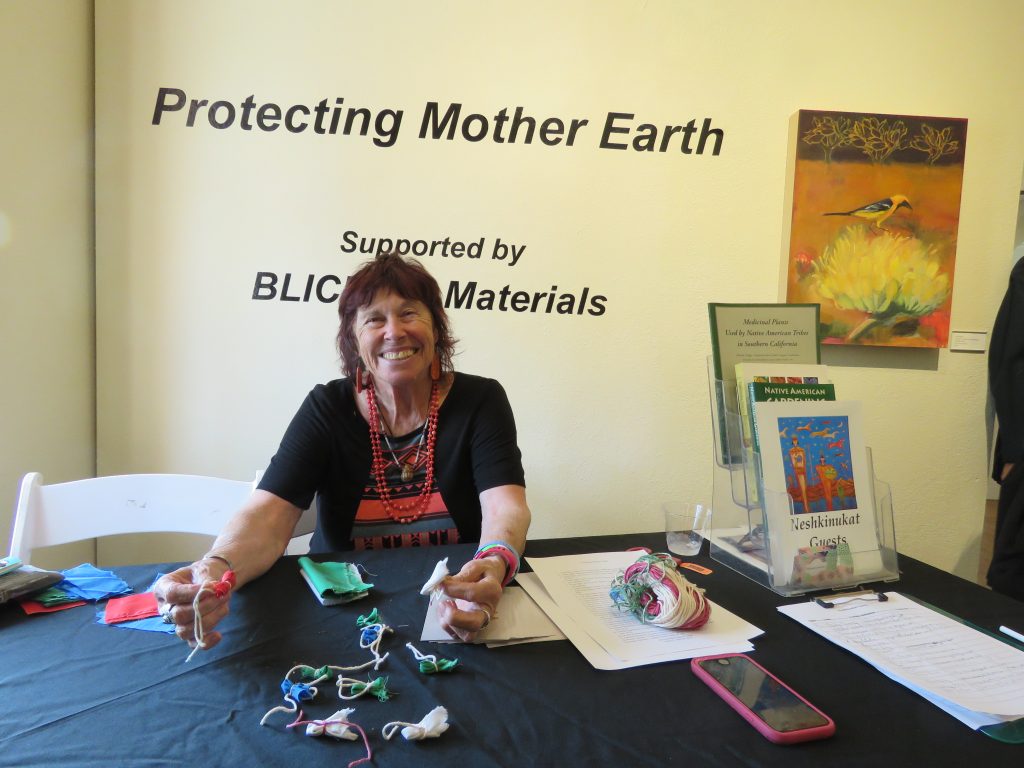 “Protecting Mother Earth” is on exhibit through April 28th. There will be a free gallery tour, Thursday, March 28 at 6:30pm.