Every time my family drove down Brea Boulevard, I always wondered about a white fenced path leading down a hill on the west side of the street, across from the Ashburn Terrace stoplight. This winding walkway, running from Brea Blvd. to the Brea Dam Trail, is known as “Lost Trail” because it laid virtually hidden until it was discovered by city landscape crew members. Beginning at Trail Rest Park, the Lost Trail takes hikers and bikers through a wide, serene undeveloped landscape that’s green and gorgeous in the Spring. 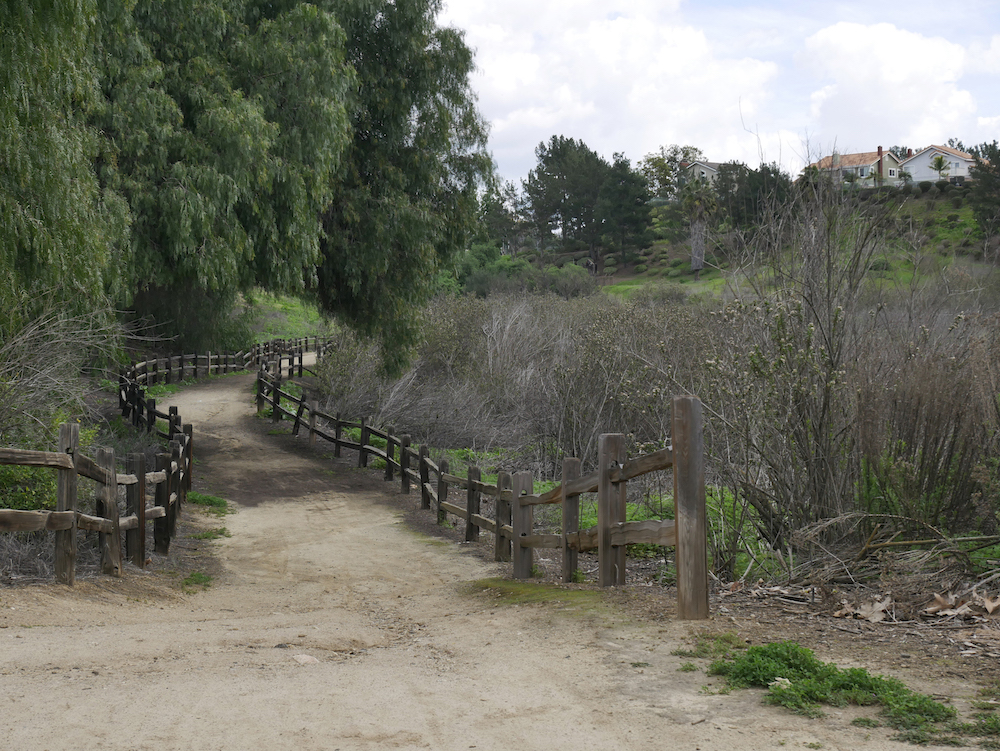 Parking in the Stater Brothers shopping center, I walked down the sidewalk that runs along Brea Boulevard until I reached the signal and crosswalk, which would have led me into a gated community called Ashford Terrace if I’d crossed the street.

From the crosswalk, the trail continues along the east side of Brea Boulevard and eventually turns into a much wider trail along Bastanchury, leading all the way to State College and the Summit House Restaurant. However, I turned the other way and went down the Lost Trail, which I’d never taken before.

Before heading down the relatively dry dirt trail, I noticed a gnarled tree standing against the green lawn looking out at the hills where undeveloped homes and private communities stood. In the distance, I saw St. Jude Hospital and the Brea Dam, which was where the Lost Trail would eventually lead me. 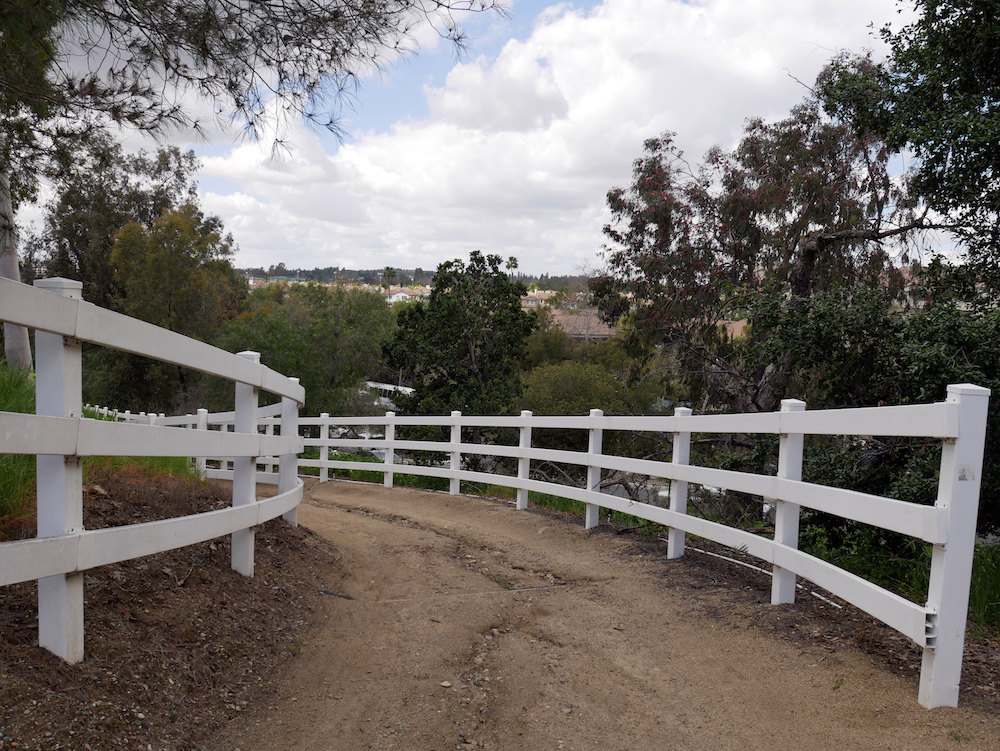 Since I’d visited on an overcast Saturday after a week of rain, the hills were very green. In fact, yellow wildflowers and purple Lupine were sprouting up on the sides of the path. The white fence guided me along a dirt path down the hillside, winding its way down into an undeveloped basin behind a gated community.

As I was following the path, I looked to my left and saw oil wells in a large patch of land that is part of the BreitBurn Energy Partners Oil Field. This is still an active field. One of the small trails that branched off the main path led up to the oil field, where fences surrounded the oil wells. One of them was the wreckage of a well with pipes coming out of the ground and going south into the hillside. According to the website, Fullerton Walks, “BreitBurn leases the field from Chevron.”

Continuing on the main trail, I came across a small marsh where little weeds were sticking out of stagnant water. Along the bottom of the white fence that surrounded that side of the trail, I saw green moss growing, probably due to the rain. According to the Natural Navigator, “moss does not care about north or south, but it requires a moist surface to thrive on. Moss needs moisture to reproduce. Moss thrives near the ground where moisture is always evaporating.” 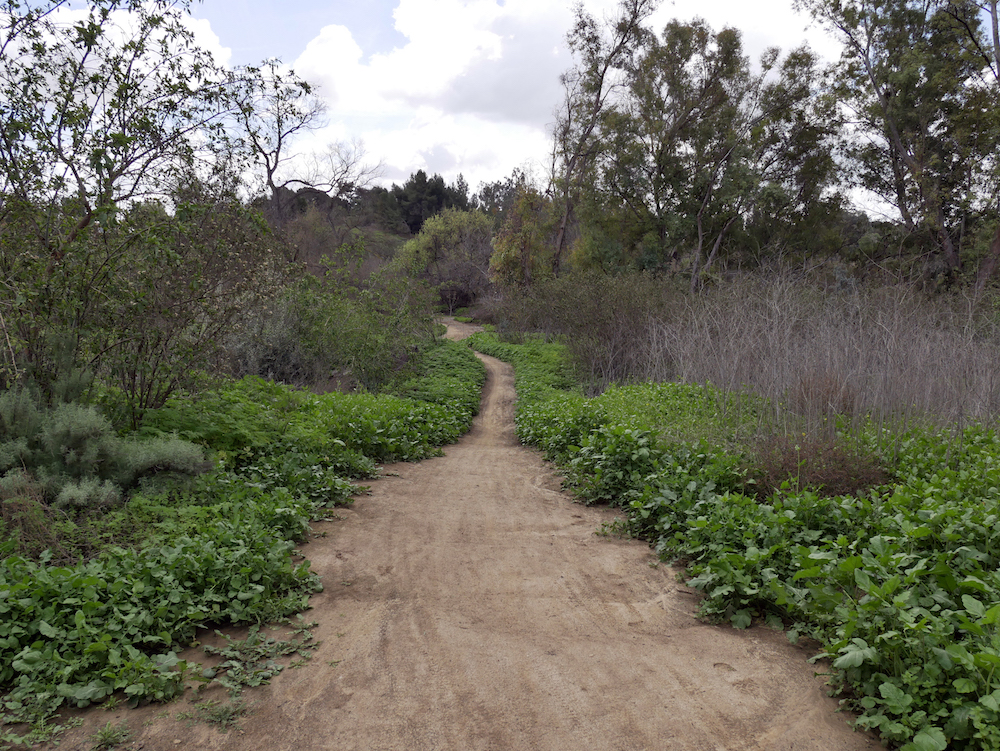 After a while, the white fence ended and turned into an older wooden fence. In some spots of the trail, the wooden boards had even fallen to the side. The trail passed over a concrete bridge over a creek where it looked like recent rains had deposited branches and natural debris. A couple of bicyclists cruised past me as I was walking, but there weren’t too many hikers on the trail.

Eventually, the wooden fence led me to the Fullerton Sports Complex, where a baseball game was taking place. This seemed like the official trailhead since there was a wooden bulletin board, which is common for trails like this. However, on one side there was nothing pinned on this one. There were no notices, warnings or maps, while the other side had a couple of old, faded flyers.

The Google Map name for this trail is “Lost Trail to Coyote Hills Ranch.” Small paths diverged from the Lost Trail. One of these paths led to a horse ranch which once offered horse rides to the public. According to the website Fullerton Walks, “the ranch is a stable for about twenty horses, and a donkey named Oliver. There’s several arenas for exercising the horses. It is a privately owned stable for boarding horses.”

Further down the path, I reached a crossroads, where the Lost Trail split in three different directions. I noticed a large yellow sign, reading, “Notice Dog Owners – Dog Nuisances Must Be Removed, All Dogs Must Be On A Leash At All Times.”

Immediately after reading the sign, two black and white dogs with leashes trailing behind them came rushing at me from the path that led toward Bastanchury. The dogs were way ahead of their owners and one of them began barking at me with his teeth bared.

The dog charged and chased me down the trail connecting with the curve of the Brea Dam Trail. Luckily, I’m a pretty fast runner, so I was able to pull ahead of the dog, running around a mud puddle and slowing it down before the owner called the animal back. I went farther along the path, admiring the yellow wildflowers and heading toward the dam.

When I came to a part where two of the trails met, the same dog appeared and chased me again, even though the owners called from a distance that the dog was friendly. It wasn’t, and it chased me back down the same path until it was called back again.

A few minutes later, a friendly bicyclist stopped and asked me if I was okay. He said, “Those pit bulls should really be kept on a leash.” I hadn’t realized that the dogs were pit bulls. As I ran into the Brea Dam Trail, I could’ve gone north to the Fullerton Municipal Golf Course or south to the Brea Dam Recreation Area, but I decided to turn around after that encounter.

On the way, I picked up a large stick as I made my way back to the Brea Boulevard entrance. So, if you plan to walk on any hiking trail in Fullerton, be sure to bring water and a stick or something to protect yourself in case you encounter an animal. To see what the Lost Trail looks like, check out my video HERE.