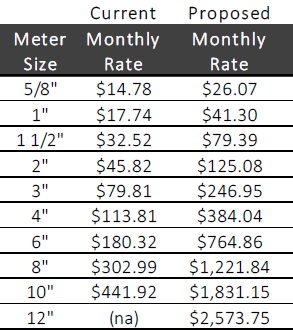 To make water meter charges more equitable, a Water Meter Equivalency Schedule would replace the current schedule. There is no known basis for the existing schedule. 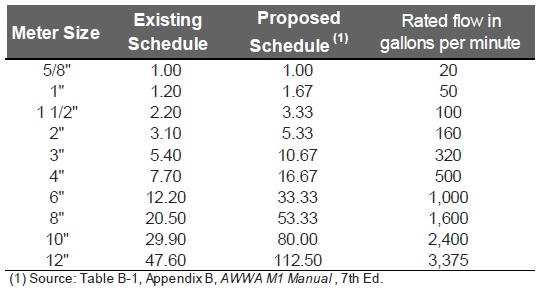 The proposed schedule would set water meter charge according to the diameter of the pipe connected to the meter. The pipe diameter determines how many gallons per minute can pass through the pipe. In general, the larger the pipe diameter, the bigger the water demand, and thus, the greater the charge. Regardless of how little water one might use, the water system infrastructure is built and maintained to support the potential highest demand of all water connections.

Under the proposed water usage rates, the price and amount of water billed at each of the three progressive rates will be proportionate to the cost and availability of the supply.

The Orange County Water District (OCWD) currently allows Fullerton to pump up to 75% of its water from the basin. The cost to produce that pumped water, including a relatively low fee paid to OCWD plus the cost of electricity for pumping, is nearly half the cost of water purchased from the Metropolitan Water District (MWD). Accordingly, the proposed lowest rate will be nearly $1 less per one thousand gallons (TGAL) than it currently is and apply to a greater portion of one’s bill (up to 12.8 TGAL compared to 7.5 TGAL per month for a single-family home).

Water usage above 25.6 TGAL (2 times the 12.8 TGAL per month) in a 2-month billing cycle for a single-family home, would be billed at the next highest rate of water sourced from MWD. Any water usage beyond that carries the additional cost of water conservation projects ($0.38 per TGAL) on top of the MWD price.

Coincidentily, the new pricing has a greater difference between the lowest and the next highest rate – a $2.3 difference per TGAL compared to $0.30 per TGAL previously – that may discourage some water customers from using excessive amount of water.

Increases over the Next 5 Years
While the initial impact of water increases on July 1, 2019 will vary among water customers, follow on increases in subsequent years of the five-year plan will apply equally to all meter charges and water rates.

Rate Increases over the Next 5 Years (FY 2020 Increase is already included in proposed July 1, 2019 rates)

The proposed meter and water usage rates discussed earlier for July 1, 2019 already reflect the first 15% rate revenue increase for FY 2020 shown in the chart above. From there on, each July 1 the proposed rate increases of 14%, 11%, 5%, and 4% will automatically apply if approved by City Council in 2019.

To level out the overall impact of the water rate increases, the number of miles of water mainlines that will be replaced each year will increase each year. By 2024 the water rates should support enough funding to replace 9 miles of water mainlines per year without debt financing, assuming water rates are revisited in 5 years to consider inflationary costs and reprioritization of water system infrastructure needs to maintain the funding required.

Other capital projects funded by the rate increases have been prioritized to maximize the amount of water pumped from the basin, ensure water quality, prepare for emergencies, provide greater safety at facility locations, and avoid more costly repairs at inflated prices in the future. The projects include rehabilitation of 2 wells, replacing 2 wells, rehabilitation of one reservoir, rehabilitating 2 booster pump stations, isolation valve replacements, emergency generators, and control upgrades.

Automatic Pass-Through Rate Increases
The 2013 Water Rate Study had the goal of replacing 6 miles of water mainlines per year but the rate increases implemented five years ago were dependent on water usage and did not anticipate the extreme reduction in water usage that occurred in response to drought and drought-related state mandated water reductions. The rate increases also did not account for the rising cost of water and electricity.

Each year OCWD and MWD revise the rates they charge the water agencies that pump or purchase water from them. The July 1, 2019 proposed rates discussed earlier include the pass-through increases from OCWD and MWD for FY 2020. In subsequent years, the OCWD and MWD rate changes could also be passed-through to water customers without an Prop 218 hearing in addition to the planned annual rate increases each July 1.

Revision 4/7/2019: Removed the statements about the inclusion of electricity cost for pumping ground water in the pass-through increases because electricity costs were removed prior to the study being approved by council on 4/2/2019.

Increased Oversight Proposed
The Water Rate Study Ad Hoc Committee supports the restructured water meter charges and usage rates and the proposed water rate increases to support the capital improvement projects as prioritized by staff. However, some committee members had concerns that the Water Enterprise reserve funds might get too large if the rate increases were to outpace the implementation of planned projects. As well some committee members wanted the City Council to consider other funding opportunities such as grants or low-cost loans that may become available over the next 5 years.

To alleviate committee members’ concerns, the committee agreed to inserted into the Water Study a recommendation for an annual review to compare completed projects against goals. Staff would provide a report to the Infrastructure and Natural Resources Advisory Committee (INRAC) each year showing Water Enterprise reserves, projected revenue, and projects planned for implementation in the next year.

Prop 218 Water Rate Hearing
On April 2 the City Council will be considering approval of the Water Rate Study and scheduling a Prop 218 Hearing for May 7, 2019 for the proposed water rate increases.