Facing drastic rent increases of 45-60%, senior residents of Rancho La Paz mobile home park in Fullerton and Anaheim asserted their voices and called upon their elected officials to intercede for them.

And, at least for now, their voices are being heard. After meeting with Anaheim Mayor and members of Anaheim City Council, the new mobile home park owner John Saunders decided to rescind the rent increases, and promised there would be no increases until at least September 1st.

How did this happen? The seniors organized. 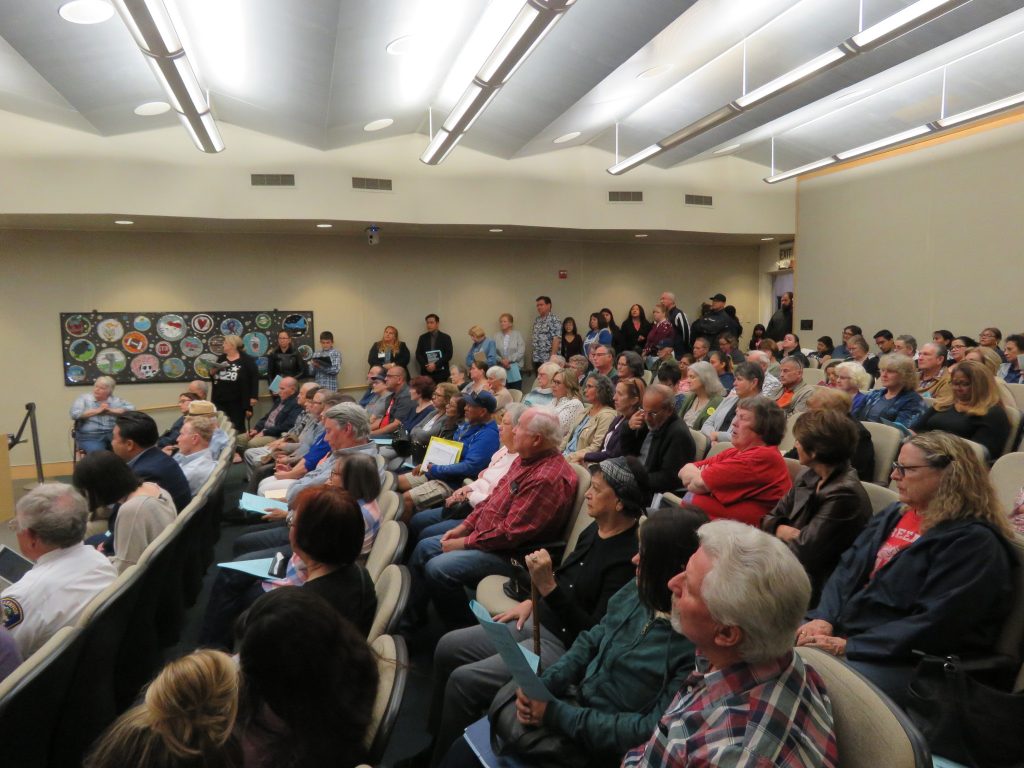 An overflow crowd of residents at the March 19th Fullerton City Council meeting.

They crowded into Fullerton and Anaheim city council meetings on March 19th to tell their stories, and to put a human face on a growing problem—the ability of property owners to increase rent as much as they want, with no protections for renters.

“I’m 93. I’m one of the veterans that made the invasion of Normandy on D-Day,” said one resident, “With this increase, a lot of people are going to be forced to leave…I implore you to do what you can for these wonderful people who have gone through so much and have so little.”

Eva Knight, who is disabled with multiple sclerosis, said that although the rent increase may be legal, “it’s certainly not moral.”

A young woman named Charlene spoke on behalf of her elderly parents: “With this $390 hike, it is forcing us to have to think about moving them out of state, away from their family, because they just can’t afford to live here anymore.” 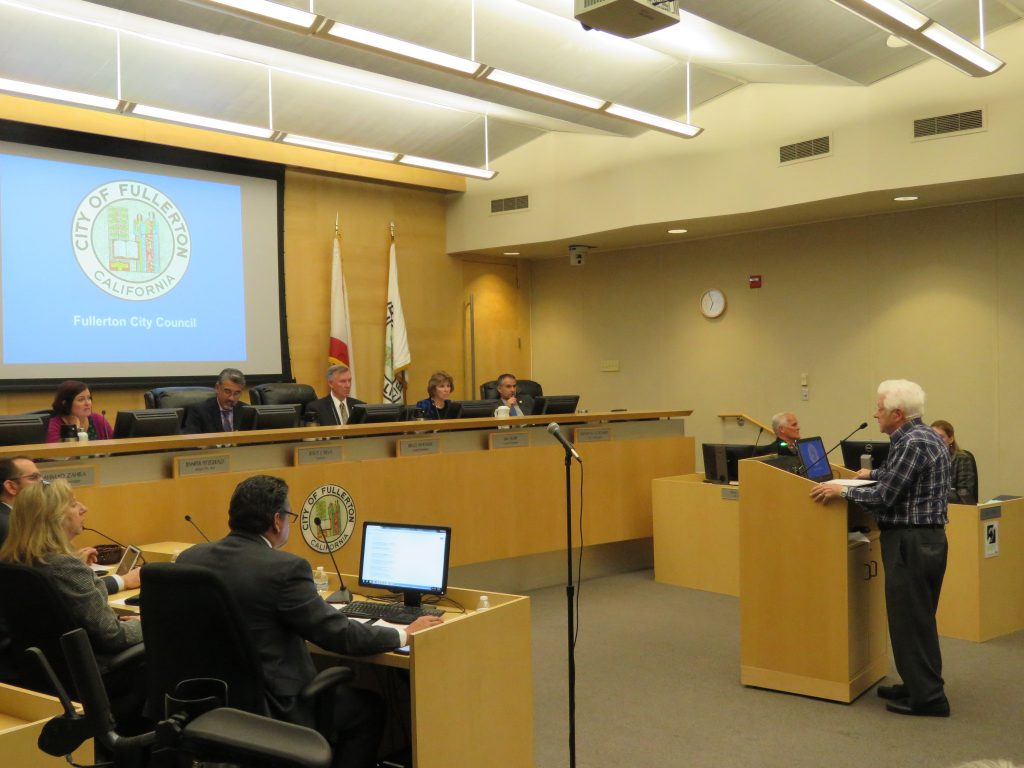 A 93-year old WWII veteran who was part of D-Day is facing severe rent increases at Rancho La Paz.

Dr. Richard Odegar, a retired educator who was wearing his shorts from his part-time job at Disneyland said, “There are 380 units, but that represents 600-700 people—600-700 lives that are being affected by a greedy group of people who want to make money. And I hope that the council will stand up to them and defend us. We vote for you—you vote for us.”

“I’m a cancer survivor, but I don’t think I’m gonna survive this,” said one resident, “You have the power to administer this life-saving treatment for me and my community. Protect your senior citizens. Be our City of Hope.”

Ruth Ann said, “The current increase of almost $400 will certainly take away from my quality of life. Do I eat or do I pay for my medication? I now have less money to move around to see my family, my grandchildren, and my doctors.”

There was one person who spoke against any kind of rent protections for the residents of Rancho La Paz: Julie Paule, who works for the Western Manufactured Communities Association, an industry/lobbying group that works for the interests of mobile home park owners.

“It is unrealistic to think that a new investor can continue with below market rents, or that a resident is entitled to low rents and they will never be corrected. Luckily the park owner has developed a rental assistance program that will assist qualified residents,” said Paule, who faced loud boos from the audience. 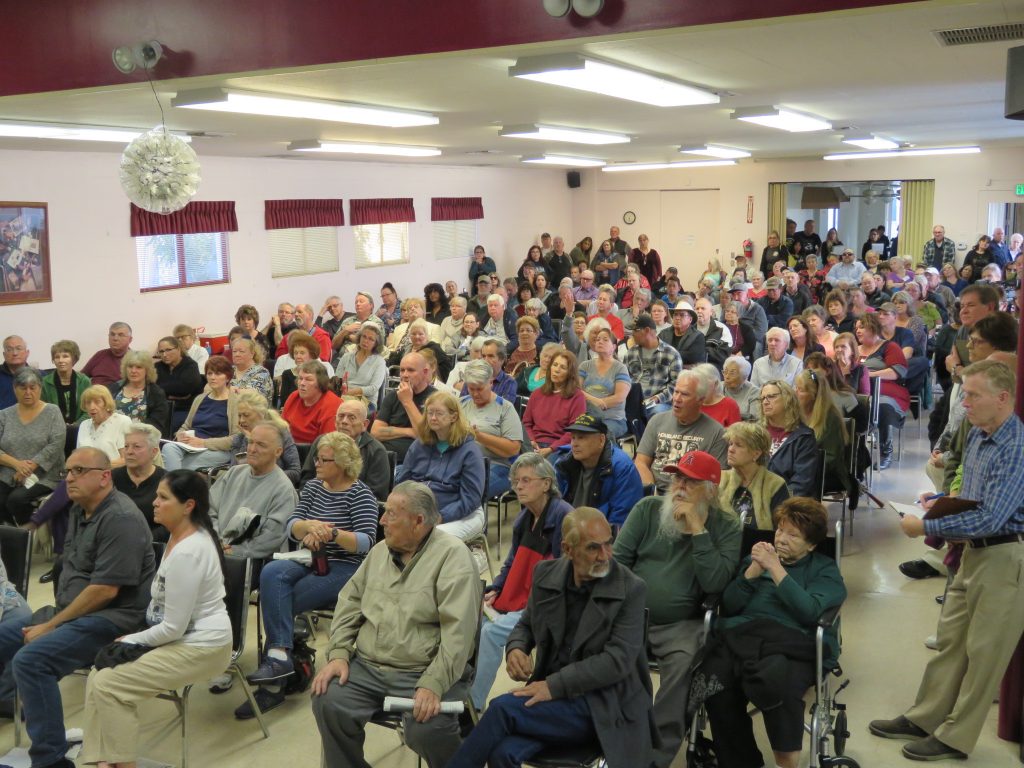 It was standing room only at the community meeting at the Rancho La Paz clubhouse on March 20.

After listening to residents, Mayor Jesus Silva asked the City Manager to draft and send a letter to the new mobile home park owners, “asking them if they would be willing to adjust the rates or meet with the residents, and at the very minimum if they’re going to provide those applications for those subsidies, to have some help filling them out.”

Council Member Ahmad Zahra, in whose district Rancho La Paz is situated, said “I am appalled by this and I can’t see why we can’t find something to do. We are the city of Fullerton and we should do better.”

The following day, March 20th, hundreds of Rancho La Paz residents gathered at the mobile home park clubhouse to learn about how they can organize and dialogue with local elected officials.

Lupe Ramirez, who organized the meeting, said, “The whole thing stands on one thing—unity! We have to get together on this. We’re gonna need a committee, we’re gonna need people involved.” 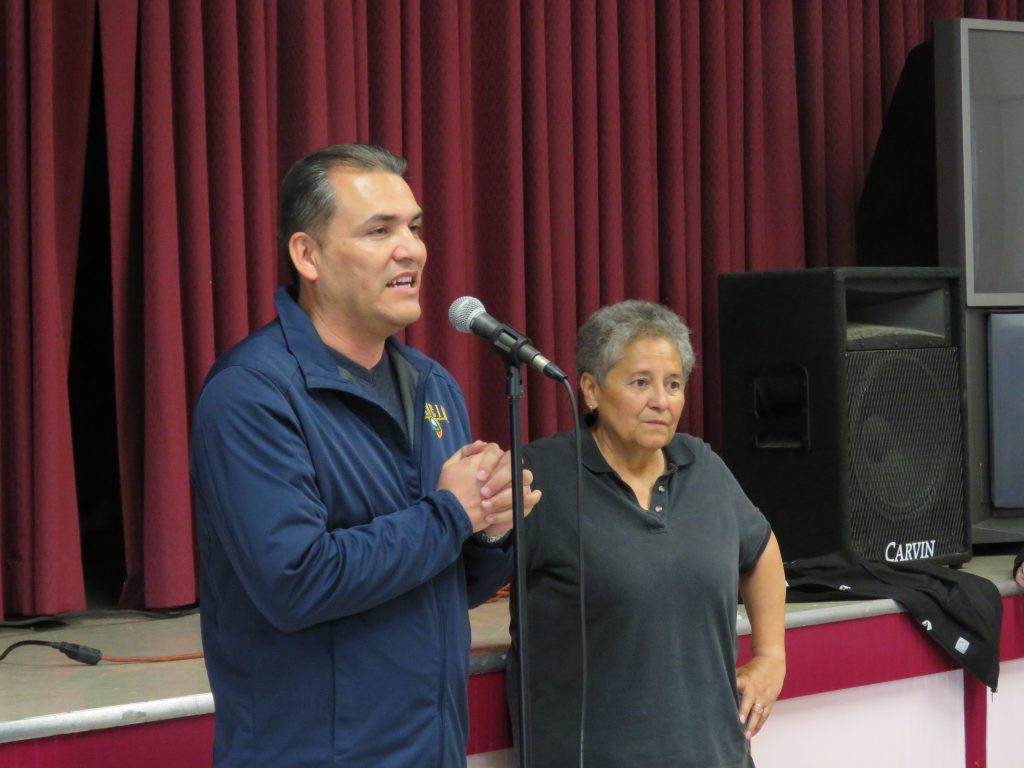 One resident gave some background information on the new owner of the park, John Saunders of Newport Beach.

Saunders’ company, Peace Ranch LLC, is affiliated with a company called Pacific Current Properties, whose executives include Michael Cirillo and Robert Coldren, a legal strategist who in March 2016 provided suggestions to owners of mobil home parks on how they can make them more profitable.

Here are some excerpts from Coldren’s report:

“Here are some ideas: If your park is designated as a ‘senior’ park, consider changing the status to ‘all age.’ I know this is sacrilege and counterintuitive but consider which tenant profile has more likely to generate income that grows rather than is fixed: senior, or working family? Who is more likely to have time to lobby for rent control: senior or working family? Acquire homes when they come up for sale in your park. It’s much easier to close a mobile home park and convert it to another use or sell it for a higher price to a developer when the park owns some or all of the units. Raise rents…Raise rents…Raise rents again.”

Ramirez introduced the Vice President of the Golden State Mobil Home Owners League (GSMOL), a statewide corporation established in 1962 to help homeowners who live in mobile home parks to know and protect their rights. It was this group that, beginning in the early 1970s, put together the Mobile Home Residency Law, which provides protections for mobile home owners.

If residents of Rancho La Paz organize and join GSMOL, they will have access to resources, advocacy, and legal aid.

Anaheim City Council member Jose Moreno showed up and spoke at the residents’ meeting, even though he normally had to work at that time.

“This gets right to the heart of our discussion of what can the city council do as it relates to rent hikes?” said Moreno.

“We know property owners are involved in property ownership as an investment, but when they begin to hike rents in a way that gouges people, that goes above what people can actually afford to pay—that creates a huge negative impact, not just on the city and the social health of the city, but on the psychology, the stress and the health of the residents themselves. This is a critical issue,” said Moreno. 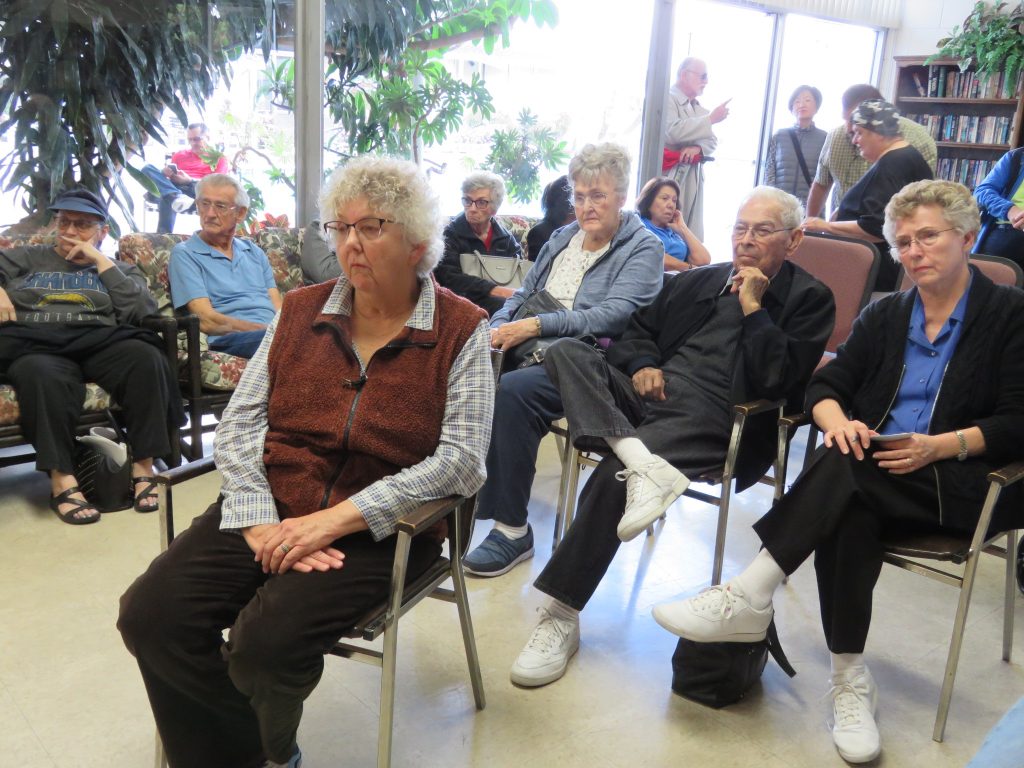 The crux of the problem is that, here in Orange County, there are no protections for renters from exorbitant rent increases.

“Our city has no law in place to prevent extreme rent hikes. We have no ability, under any one of our policies or ordinances to prevent this from happening,” said Moreno, “We’re seeing rent hikes in the most extreme way when a property is sold to a new owner.”

One rather obvious solution would be for the cities of Anaheim and Fullerton to pass a “rent stabilization” [aka rent control] ordinance. This would allow the city to place limits on the amount rents may be raised.

Unfortunately, this is a politically unpopular idea in Orange County.

“Some of our council members believe strongly that this is a question of ‘the market’ and that at some point it will correct itself once we build more housing for people,” explained Moreno, “But by the time we build that housing, many of you will be on the streets.”

Recently, the cities of Inglewood and Glendale have passed rent protections for residents. Glendale’s ordinance put a permanent cap of 7% rent increase. If property owners exceed that 7%, the property owner is required to pay the relocation fees of any tenant who cannot pay that increase.

There are 110 cities and counties in California that are covered by some form of rent stabilization, and LA County is in the process of creating a rent control/rent stabilization ordinance—capping rent increases at 3%, according to the representative from GSMOL. 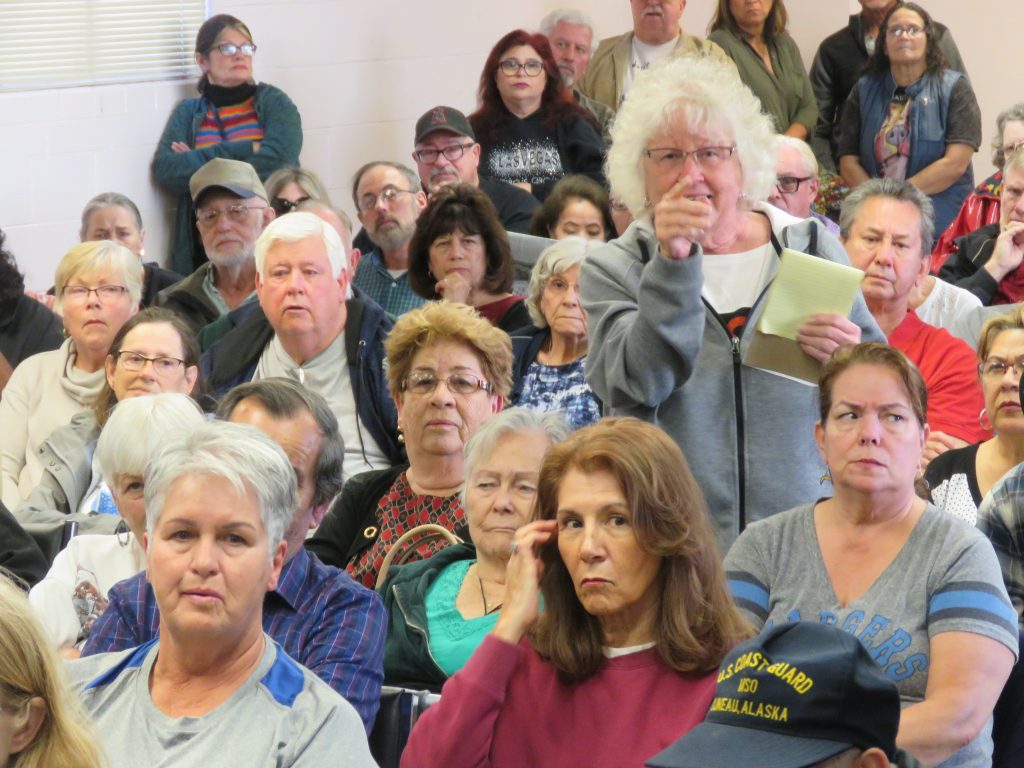 No Fullerton City Council members or staff showed up, except a young representative of Councilmember Ahmad Zahra, who said that Zahra “wants to work as hard as he can for all of you, to make sure that this solution comes to a resolution.”

On March 26, Saunders met with Rancho La Paz residents in a meeting called by Mayor Harry Sidhu and other council members.

“As a result of our meeting, I’m pleased to announce Rancho La Paz’s ownership has committed to rescind the proposed increases and to spend the coming months working with residents to find common ground,” Sidhu said in a press release.

“We will work with residents on a more gradual transition,” said Saunders, “I look forward to meeting with residents to talk about a way forward that allows time to adjust and also brings improvement to the community.” 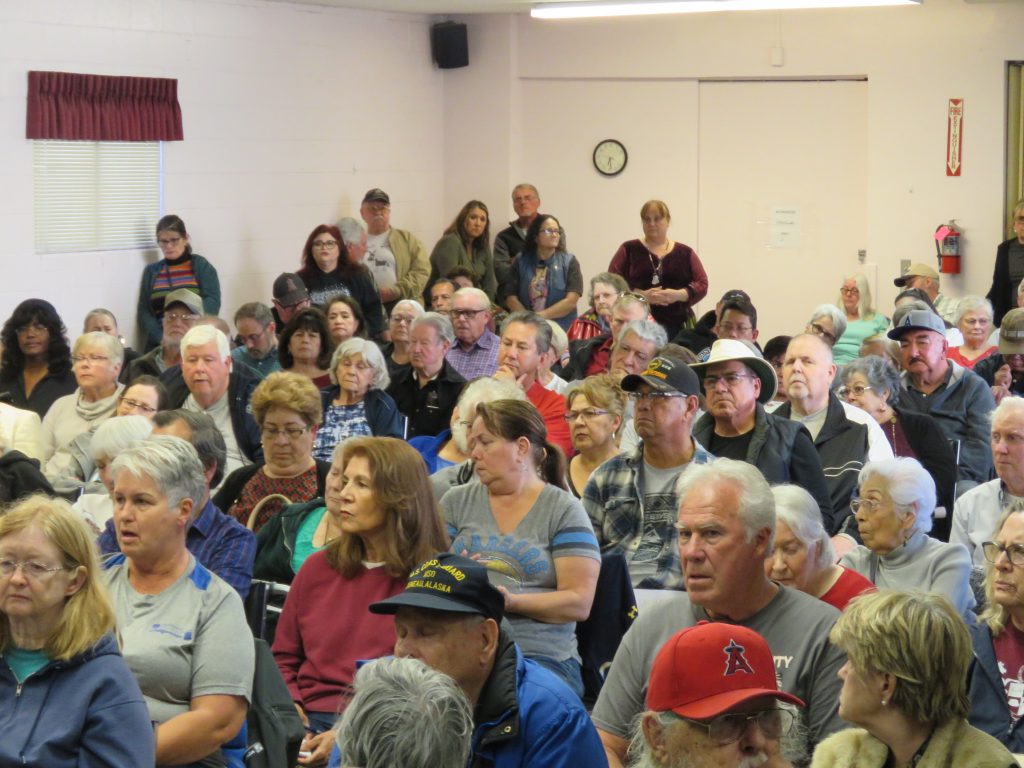 With the drastic rent increases, many residents of Rancho La Paz fear they will lose their mobile homes.