Myths About Muslims in Lecture by CSUF Professor at Fullerton Library 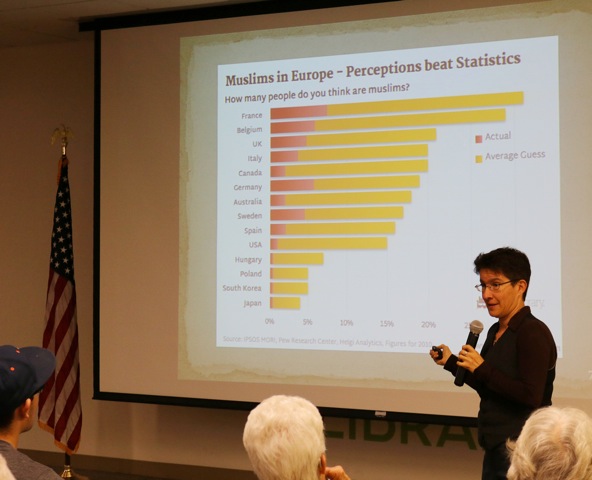 Dr. Guia delivered data showing that far from an “invasion” Muslims, immigrating over the last 200 years and their American-born descendants, make up only 1.1% of the US population.

On March 20, as a part of the Fullerton Public Library’s Town and Gown lecture series, CSUF History Professor Dr. Aitana Guia presented a very timely and important session on “‘The Muslim Question?’ The Current Struggle for Civil Rights and Belonging in Europe and America” to a full and diverse audience.

If you missed the event the video of this presentation is available to view on YouTube under the Fullerton Public Library at https://www.youtube.com/watch?v=OxSrvognjeo.

Dr. Guia, a social and political historian of modern Europe, is from Spain and has lived in Britain, Venezuela, Italy, and Canada. She holds dual Spanish and Canadian citizenships. She started her presentation by stating that she likes facts and that her lecture was based on facts.

Dr. Guia explained the significance of using “The Muslim Question?” in the title.  In the Nineteenth Century, many Europeans coined the term “The Jewish Question” to refer to what they perceived to be an unwillingness of European Jews to assimilate to the countries where they lived. European anti-Semitism kept growing until it led to the Holocaust. Understanding the dynamics and outcome of “the Jewish Question” gives new relevance to our current debates on the place of Muslims in the West.

Dr. Guia presented differing histories of Muslim immigration in Europe and the United States. In Europe, Muslim workers from countries such as Turkey, Morocco, Algeria, and Tunisia were invited and sought after as much needed guest workers in the rebuilding after WWII. Employers encouraged trained workers to overstay, as they were needed. These workers settled and their descendants go forward four generations to today.

The history of Muslims residing in the United States is much different. A quarter of American Muslims are African-Americans that converted to Islam at various times in the Twentieth Century. The rest are Muslims from all over the world that arrived in small numbers in the last two hundred years and their American-born descendants. Since it is more expensive and difficult to immigrate to the United States, American Muslims have a higher socioeconomic position and are more educated on average than European Muslims.

Dr. Guia contrasted the myths regarding Muslims in Europe and the United States with the facts to dispel them. Such myths include the extremely exaggerated estimates by current citizens of European countries and the United States regarding the percentage of their population that is Muslim as opposed to actual percentages. For example, only 1.1% of the American population is Muslim, but when asked, people think that 15% of the American population is Muslim (Pew Research Centre 2010 report). The facts dispelling myths about the actual number of Muslims and the projection of their numbers in the Twenty-First Century also dispel the myths of a Muslim invasion and of Muslims taking over European cultures.

The topics in Dr. Guia’s book, The Muslim Struggle for Civil Rights in Spain:  Promoting Democracy Through Migrant Engagement, 1985-2010, were used to expand the discussion and apply it to other countries.

Discussed were the barriers to integration, including the difficulty of gaining citizenship in some countries.  Dr. Guia showed what some of the faces of integrated and successful Muslims actually “look” like, including an actress, a talented author, the mayor of London, and the mayor of Calgary (Canada), who has been elected and re-elected three times. She importantly emphasized the waste of human talent when this kind of integration is prevented and the personal and national loss this represents for everyone and to democracy. Other additional barriers are nativism and populism. Also discussed is the necessity to evaluate news and its sources for accuracy because of the decline of investigative reporting and how differently news is sourced and reported today.

Adding to this important and relevant presentation were questions taken from the audience. One person asked about the myth that Muslims want to impose Sharia Law on Western countries. Dr. Guia explained that some Muslims have made demands that civil law incorporate religious law for voluntary family arbitration. But that countries like Canada have been reluctant to allow it. As for criminal law, most European and American Muslims embrace the constitutions and legal codes of their countries of citizenship or residence and have no desire to import other legal codes.

Dr. Guia concluded by saying that she likes to talk to people, all people, to get to know them. Everyone has a story. By doing this she learns. She advised to not just tolerate people, but to embrace pluralism. With plural views, sometimes one can get upset, but often one is surprised and always grows as a person.

With those concluding statements, Dr. Guia told us what we can do on a personal level to break down the barriers between us (both internally and externally) by not just tolerating those who differ from us, but by engaging and truly getting to know, learning from, and including those whose talents are needed by us, in our country and the world. Our own interpersonal actions can help to further the integration, inclusion, and engagement of others and by doing this, increasing and strengthening democracy.

More information on Dr. Guia’s publications and research can be found at http://www.aitanaguia.com