Both biopic and musical, “Rocketman” creates a genre of its own that invites the audience to immerse itself in the motivations, the moods and the magic that make for the genius that rocketed a shy Reginald Dwight into an outrageous rock-and-roll performer, achieving world-wide fame before he was thirty.

The road that got Elton John there and the demands that giftedness and hard work make on those able to create the distinctive persona that a rock star needs to command the world stage are the focus of “Rocketman.” Directed by Dexter Fletcher, who also brought us “Bohemian Rhapsody,” the two movies invite comparisons.  However, “Rocketman” requires and earns more from the audience as it occasionally lapses into metaphoric scenes of magical realism.

Fletcher and screenwriter Lee Hall begin the film with a plumed and feathered creature, sporting both angel wings and devil horns, as he makes his way down a nondescript hall. The startling creature joins a circle of ordinary-looking people gathered to tell about addictive behaviors that have taken over their lives. Wearing bejeweled glasses, Elton John begins his tale of addiction to alcohol, cocaine, and assorted drugs that resulted in his attempted suicide.

Through flashbacks, we next see Elton as the small boy, Reggie (Matthew Illesley), seated at a piano reproducing by ear difficult musical selections he has heard. Mostly ignored by his self-absorbed mother and his emotionally remote father, Reggie has a grandmother (Gemma Jones), who intercedes for him and insists that the boy be given piano lessons. Recognized as a true prodigy, Reggie’s talent earns him entry into the Royal Academy of Music, where he studies the classical masters. But it isn’t until he is a teenager and hears rock-and-roll music that he becomes engrossed and immersed in writing music of his own.

As the adult Reginald (Taron Egerton), he connects with music publisher Ray Williams (Charlie Rowe), who spots his potential and connects him with lyricist Bernie Taupin (Jamie Bell). The match is perfect as the unique talents of the two men blend perfectly. They become lifelong friends and collaborators. Williams soon signs them on for a three-album contract.

Fame then comes quickly. When the owner of the Troubadour in Hollywood offers him an on-stage performance opportunity, Williams and Taupin urge Reginald to change his name The three of them come up with “Elton John.” However, the old shyness remains until Elton decides that in order to go out in front of a live audience he must dress up in outrageous costumes and take on another persona.

This happens, as the on-stage Elton, dressed in sequins and winged boots, pounds the piano and belts out “Crocodile Rock” that electrifies the audience. Here a little magical realism takes place as Elton rises up from the piano bench and the cheering audience appears to levitate with him. At a party following the Troubadour performance, Elton is approached by manager John Reid  (Richard Madden), who recognizes his  talent and also his repressed homosexuality. They develop a relationship that later becomes fraught with emotional and professional difficulties. It is the early 1970s, and homosexuality has not yet become an acceptable lifestyle.

Beneath the bravado of his outrageous performances, Elton remains needy and insecure, Reid making it clear to him that they are not nor will ever be in an exclusive romantic relationship. However, the emotional insecurity does not affect Elton’s creativity. Dozens of songs, like “Your Song,” “Don’t Let the Sun Go Down on Me,” “Goodbye Yellow Brick Road” get written easily and quickly by Elton as he works with Taupin’s lyrics.

Nevertheless, Elton’s emotional and physical health spirals downhill, as he increases his use of drugs and alcohol. After an attempt to drown himself in his backyard swimming pool, he allows himself to be placed in rehab. And this is where we see him as the plumed and feathered creature in the opening scene. The rehab seems to have worked because a postscript at the end of the film tells us that he has been free of drugs and alcohol for the past 29 years. 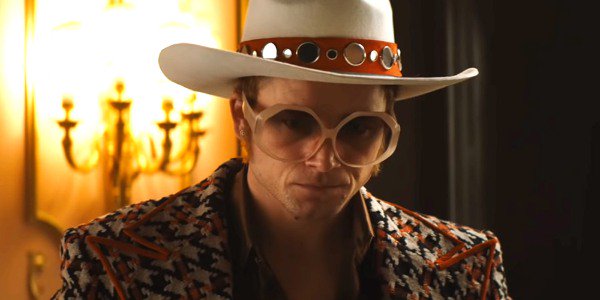