Rally to “Close the Camps” at Rep. Cisneros’ Fullerton Office

A crowd of people gathered outside Congressman Gil Cisneros’ Fullerton office on July 2 for a rally to “Close the Camps” at the U.S./Mexico border, where children who have been separated from their parents are being held in inhumane conditions. This rally was one of hundreds in cities across the US to #ClosetheCamps.

“We’re not alone. We know this is wrong. This is not what the United States of America stands for. It stands for helping those who need our assistance,” said Danny Torres, who organized the rally. “I could not see celebrating Independence Day two days from today knowing that some people have no independence.” 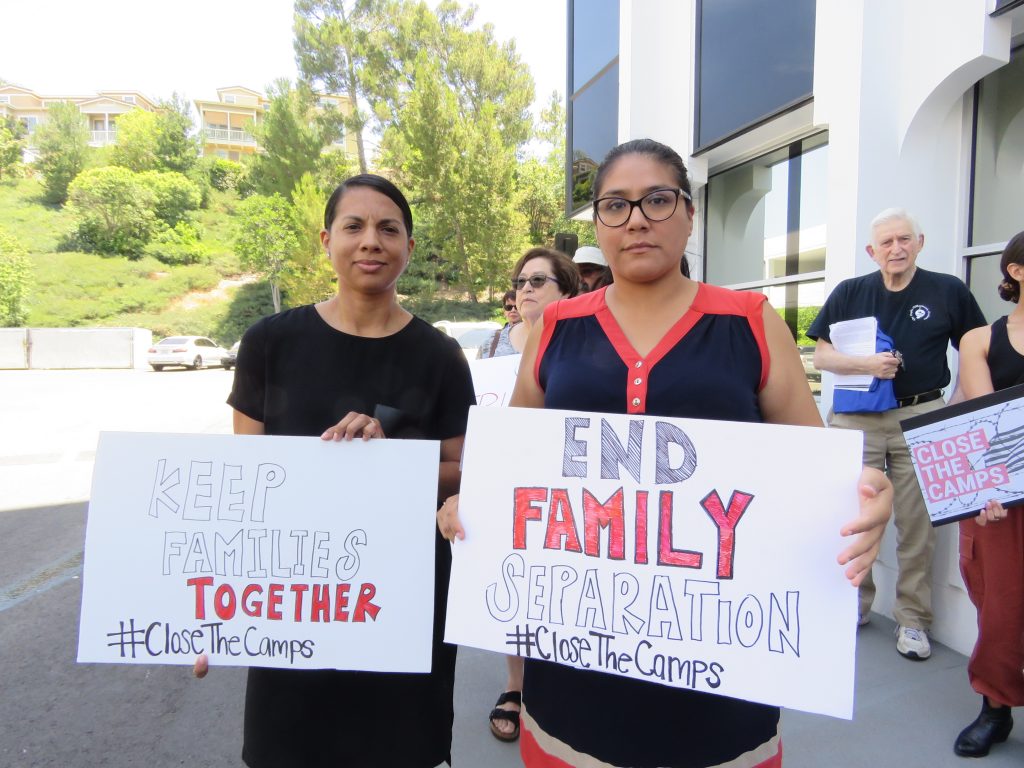 Attendees came from all corners of District 39, which Cisneros represents.

“I’m a librarian and he’s a math teacher,” said Celina Lee, who was in attendance with her husband Jordan. “We come from Whittier, and we’re here because we’re immigrants, and we’ve made a life here. We all come from some sort of immigrant descent, and this is a country that is great because of its diversity. I’ve just been sick to my heart seeing how children and people have been treated inhumanely, without dignity. This is not who we are.”

Barbara, a Jewish woman, came from the city of Orange to attend the rally.

“We say, ‘Never Again’ and it means ‘Never Again’ for anybody, not just Jews,” she said. “These are concentration camps. If these are the pictures we’re seeing [in the news] I can only imagine what we’re not seeing.”

Natalie, from Yorba Linda, said, “In high school, we learned about the Holocaust. And we asked, ‘What would we have done if we were there?’ So this is what I’m going to do, to make sure I do everything I can to shut this down.”

Attendees at the rally ranged in age from retirees to students, to young children. 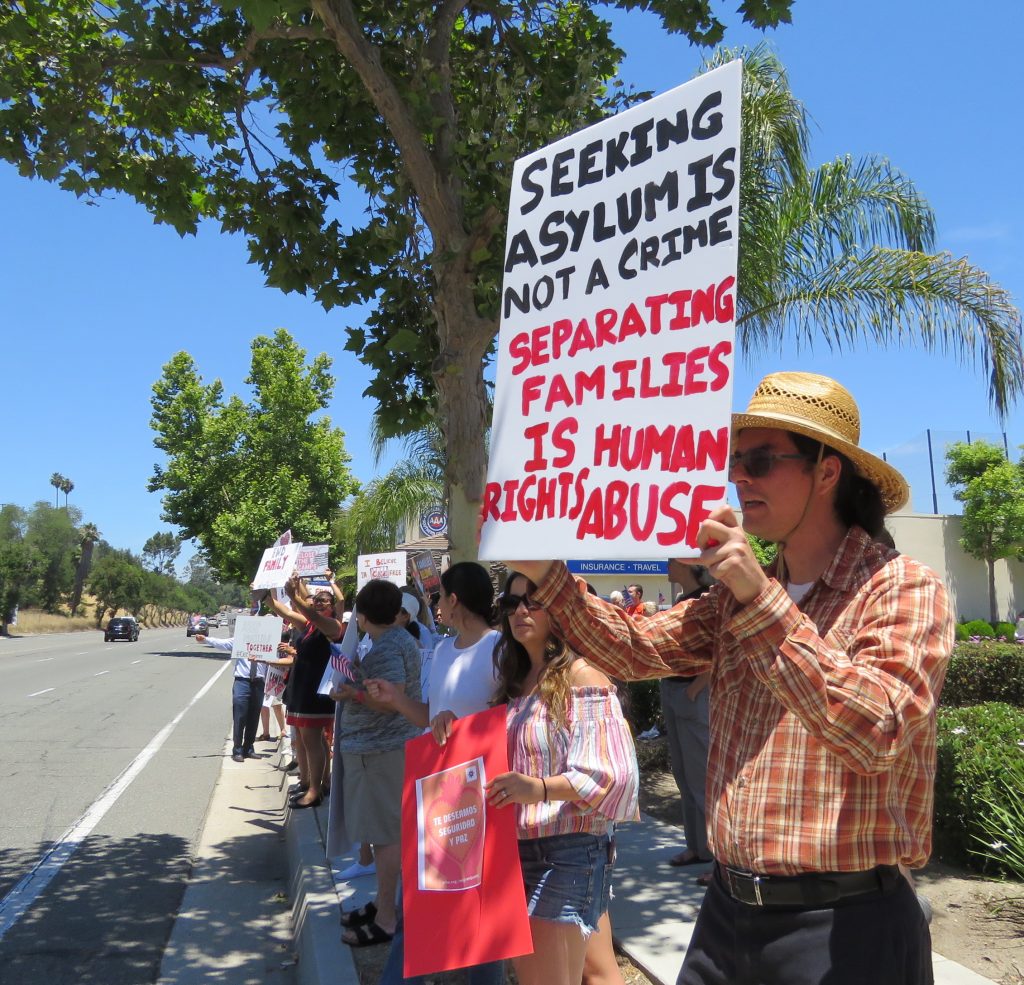 “I’m tired of sitting around feeling like I’m able to do nothing, but in reality I can do something by joining you all here today,” said a recent college graduate in attendance. “It could be your sister, your mother. It could have been your favorite person in the world who’s in these camps.”

“I’m outraged to see that babies are not being changed, are left in their own filth,” said  Kevin, a retired special education teacher. “We are all created equal, and we need to look out for them the same as everybody else.” 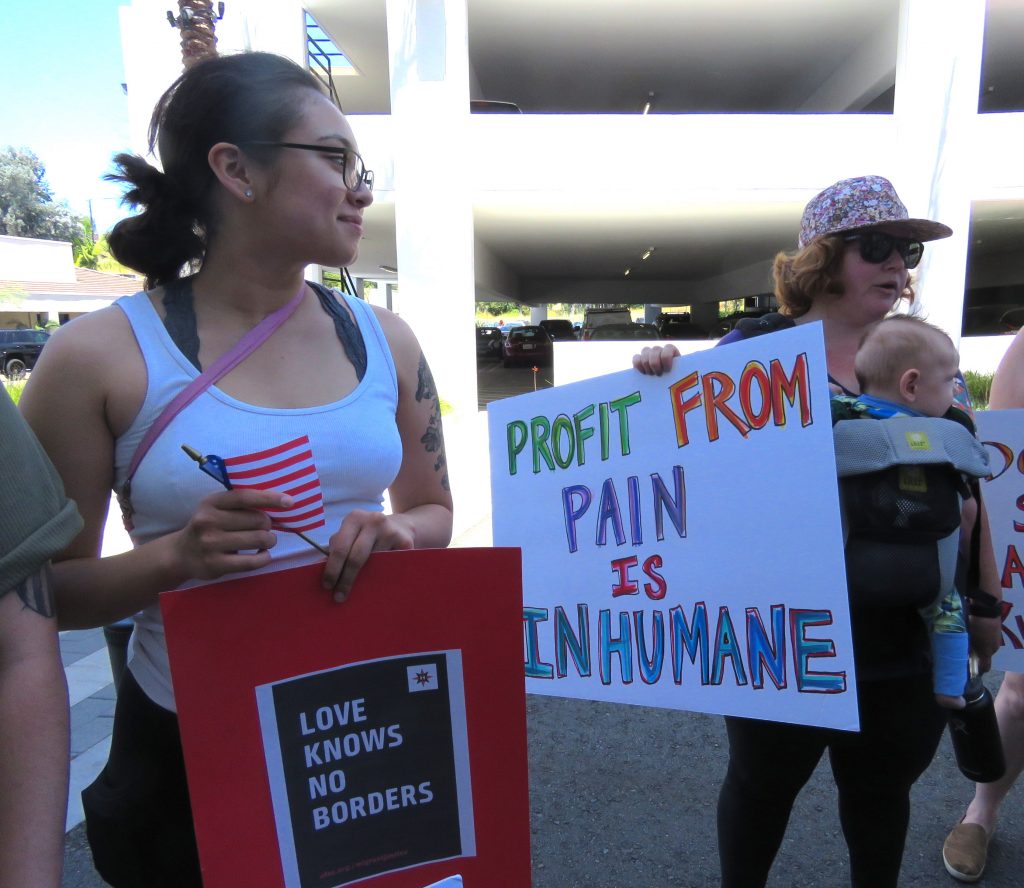 A preschool teacher named Joann carried a sign which addressed the ugly history of Fort Sill, which is being converted into a children’s detention center.

“Fort Sill has been a concentration camp for about 125 years,” she explained, “First, with the Native Americans, then during WWII with Japanese Americans, and now for babies.” 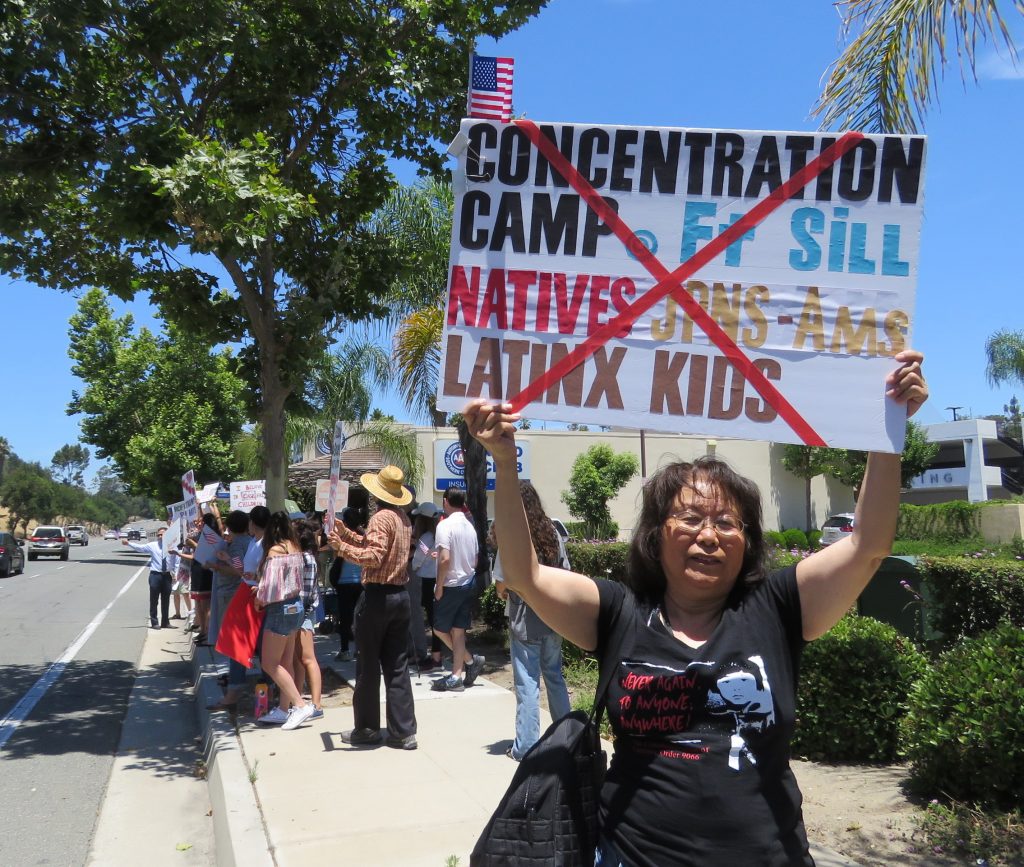 As attendees were gathered outside Fullerton Towers, where Cisneros’ office is located, an office manager walked out and said, “Sorry, I have to interrupt. You’re on private property, and you’re not allowed to stand here…You need to leave.”

An altercation followed in which attendees of the rally entered the building and tried to enter the elevator to Cisneros’ office. Security guards blocked entrance to the elevator. 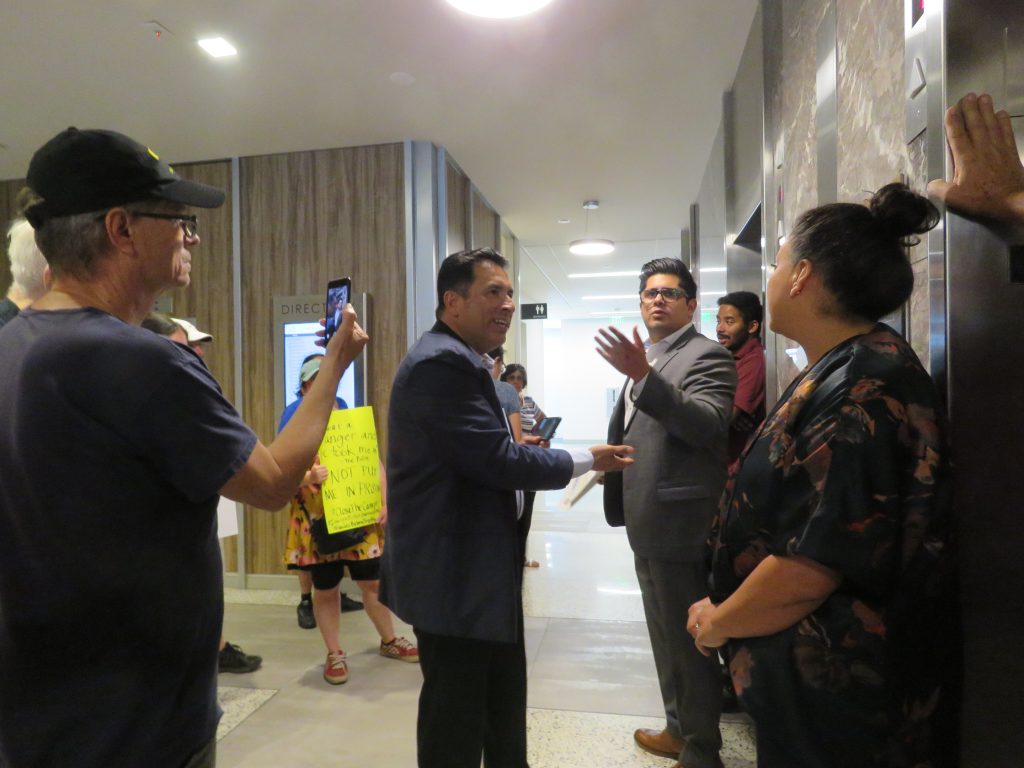 Security guards and the office manager blocked access to the elevators which led to Cisneros’ office at the Fullerton Towers.

Cisneros was not in his office, but a representative eventually came outside and read a statement from the congressman, specifically regarding his “no” vote on the senate appropriations bill on Jun 27:

“In good conscience, I could not vote for the Senate Supplemental bill when it does not sufficiently address the humanitarian crisis at our southern border. We have an urgent moral responsibly to protect the health, dignity, and lives of immigrant children and this bill does not adequately guarantee they are given the humanitarian aid and services they need. I could not support legislation that allows Senators to waive requirements for services, and does not provide for standards of medical care, food, water, and hygiene for these families. Proper oversight is needed to ensure that these children are not kept in inhumane conditions while they wait to be reunited with family members or sponsors. A comprehensive solution to address the fundamental problems with our immigration system is needed now more than ever. We need smart investments that address border security, but also put an end to the cruel and inhumane treatment of people because of their country of origin. I will continue to work with my colleagues on both sides of the aisle to strengthen our border security, protect our Dreamers, reunify families, and fight for American values.”

Meanwhile, the camps remain open, and reports are regularly released documenting the inadequate conditions there.

After this, the rally migrated to the sidewalk along Harbor Blvd. 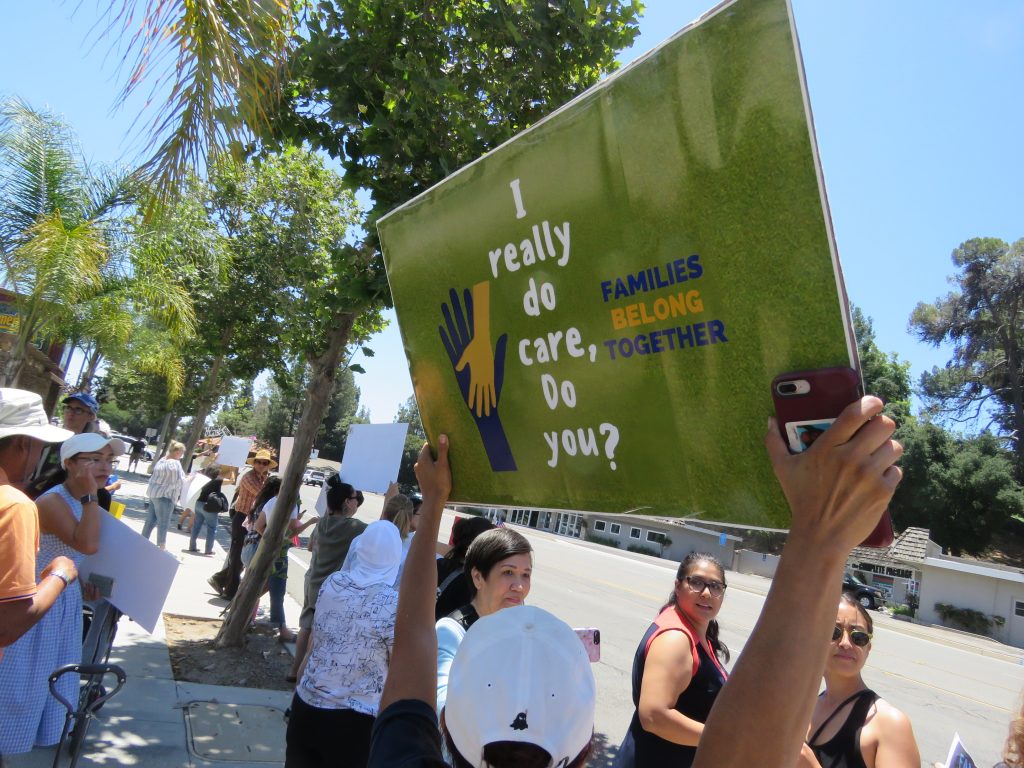 I spoke with Torres, asking, “It seems like Cisneros agrees with those who are rallying here. What message would you like to send to him?”

“I’m really happy to see that my congressman voted the right way,” Torres said. “I hope that Mr. Cisneros continues to fight for justice, and that he continues to follow the strong progressive wing of the Democrats, with those four strong women. Because this is where the United States is actually at. It’s not where the establishment Democrats are at. People are upset, people are mad, and rightfully so because this isn’t who we are.” 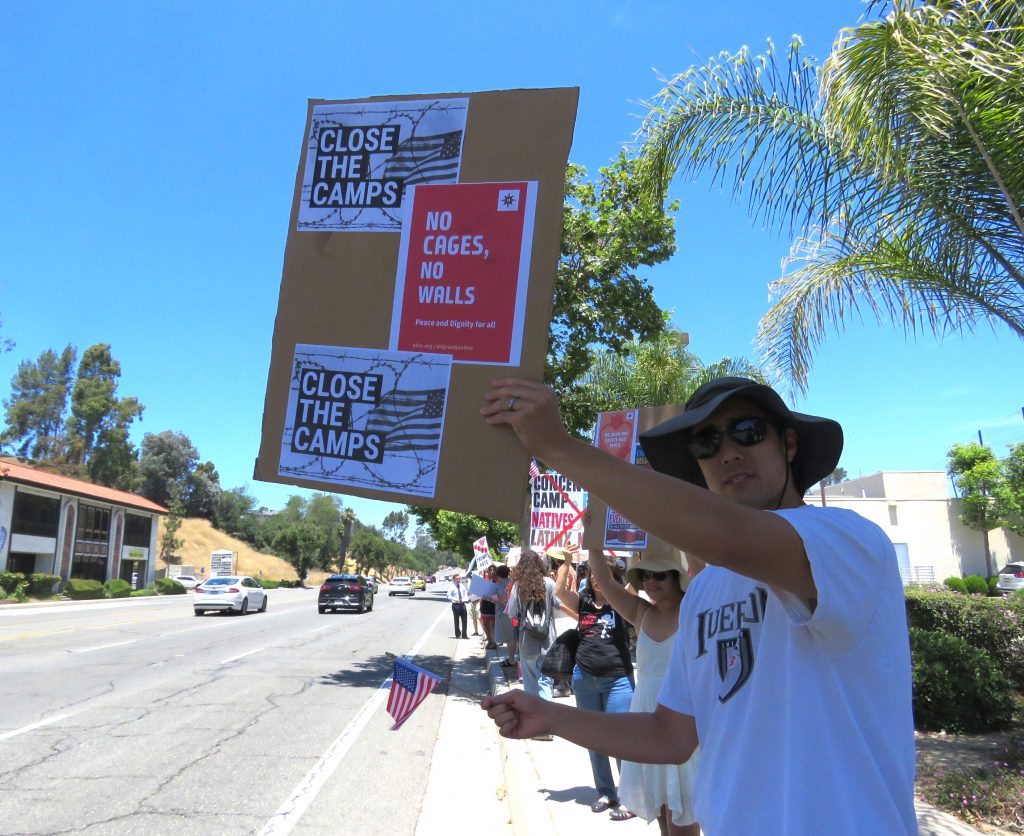 One lone counter protestor showed up, and got into a verbal altercation with some of the rally attendees. He said that the family separation/children in cages are former President Obama’s fault, that Jesus loves Donald Trump, and that God wants Donald Trump to be president, which is why he’s president.

Although president Trump has claimed many times that he inherited a family separation policy from Obama, according to FactCheck.org, “previous administrations did not have a blanket policy to prosecute parents and separate them from their children.”

USA Today reports, “It was after the Trump administration announced its ‘zero-tolerance’ immigration policy in April 2018, in which everyone who illegally entered the U.S. was referred for criminal prosecution, that thousands of migrant children were separated from their parents.” 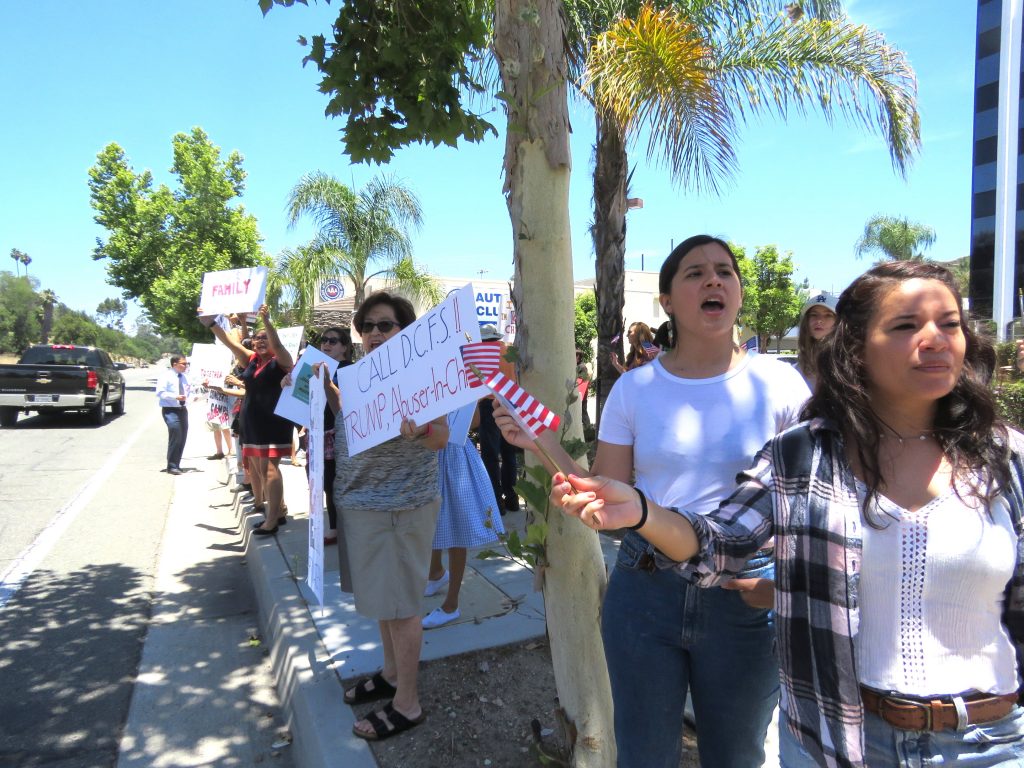 Regardless of who started the camps, and who’s fault it is, the fact remains that thousands of migrant children have been separated from their parents and continue to be held in inhumane conditions in what are essentially concentration camps. The purpose of the rallies across the country was to bring an end to this. 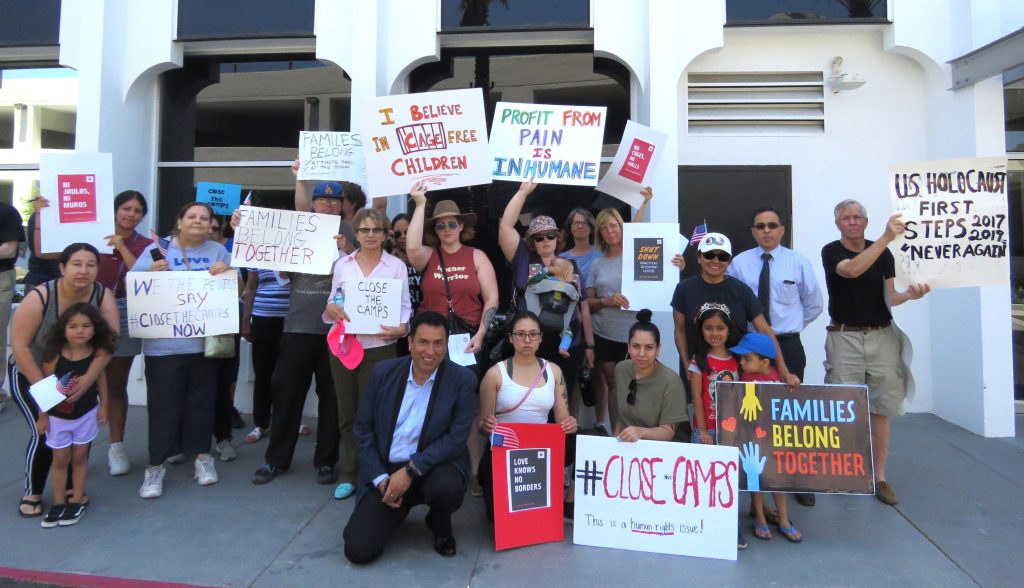