While mainly known as the actor/comedian from the iconic Cheech and Chong duo, Cheech Marin has, over the past few decades, also been building one of the largest, and finest, private collections of Chicano art in the world, comprising over 700 works from iconic 70s artists like Frank Romero and Roberto Gutierrez, to newer talents like Wenceslao Quiroz.

The current exhibit at the Muzeo in Anaheim, “Papel Chicano Dos” features a diverse array of works on paper from Marin’s collection, chronicling various expressions of Mexican American identity, primarily in the southwest.

Gaspar Enriquez, who is featured in the show, gives a good working definition of “Chicano” in a quote on a wall of the exhibit beside a colorful lowrider car: “One is born a Mexican-American, but one chooses to be a Chicano. Politically charged, the Chicano lifestyle has been passed from one generation to another. It has survived wars, prisons, and strife.”

The Chicano art movement began in conjunction with the Mexican-American civil rights movement, and many of its earliest pioneers were based in Los Angeles.

In 1974, Los Four’s historic 1974 exhibit at the Los Angeles County Museum of Art (LACMA) was the first Chicano art exhibit at a major US museum.

Romero is perhaps best known as a muralist—an important element of Chicano art. 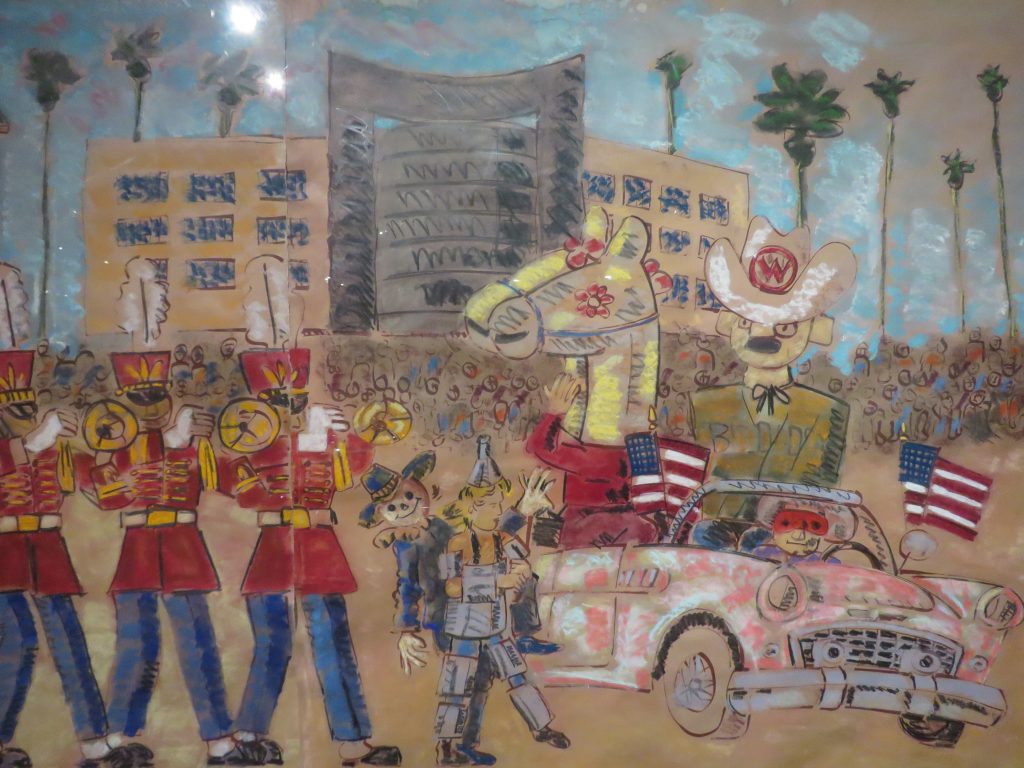 One striking non-paper art piece in the exhibit is a colorfully painted 1950 lowrider car done by Gilbert “Magu” Lujan. This car actually has a Fullerton connection, as it is owned by Fullerton businessman Paul Dunlop, another collector of Chicano art who owns the Villa Del Sol plaza in downtown Fullerton. 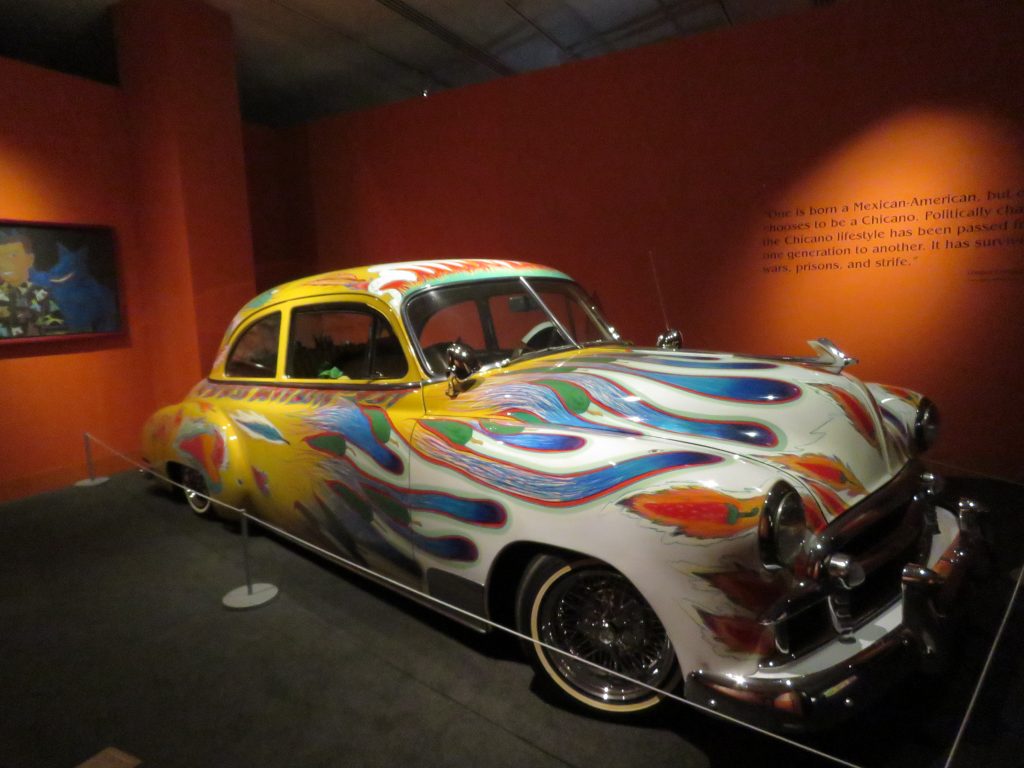 Another important 70s art collective out of East Los Angeles was called “Asco” (Spanish for “nausea”), and featured Gronk Nicandro, Harry Gamboa Jr., Willie Herron, and Patssi Valdez. Asco was among the first to incorporate political activism into its aesthetic.

After Asco, Gronk (whose works are featured in the exhibit) pursued painting and stage design. He actually has a mural at Fullerton College, and was an artist-in-residence there a few years back. 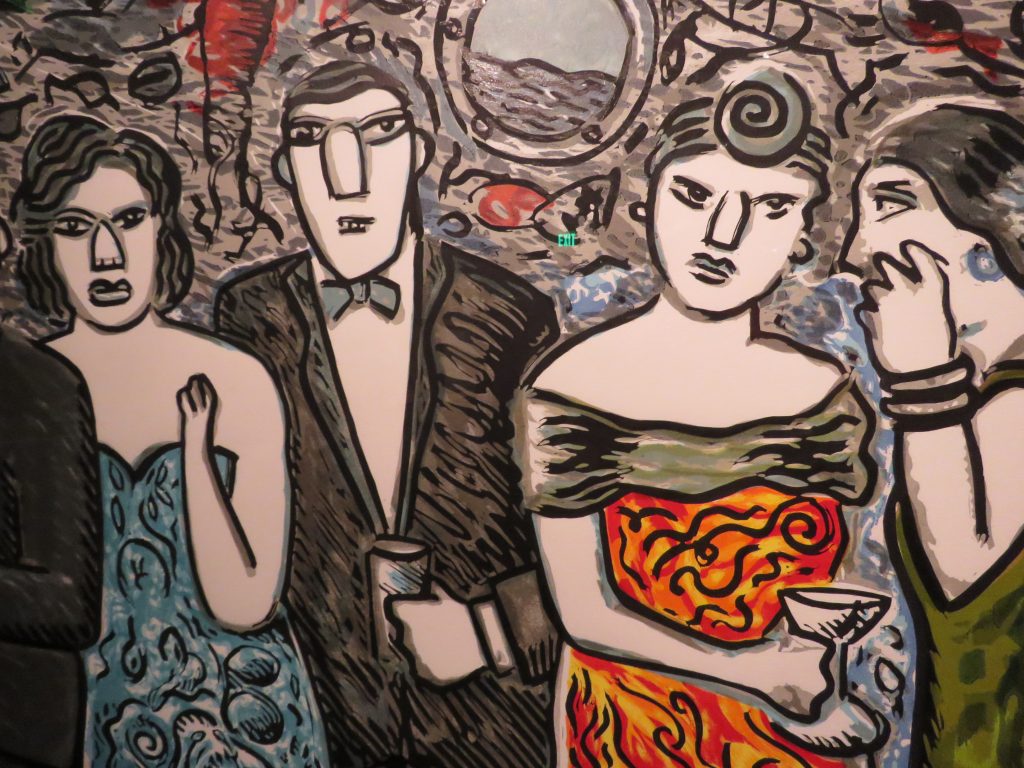 Some of the works use powerful Mexican catholic religious iconography to speak to current social/cultural issues, like Pablo Andres Cristi’s “If La Virgen Returned”.

Christi’s parents fled the brutal US-backed Pinochet regime in Chile and settled in Los Angeles. According to the curator, Christi’s work “is steeped in a critical inquiry of power, representation, and history.” 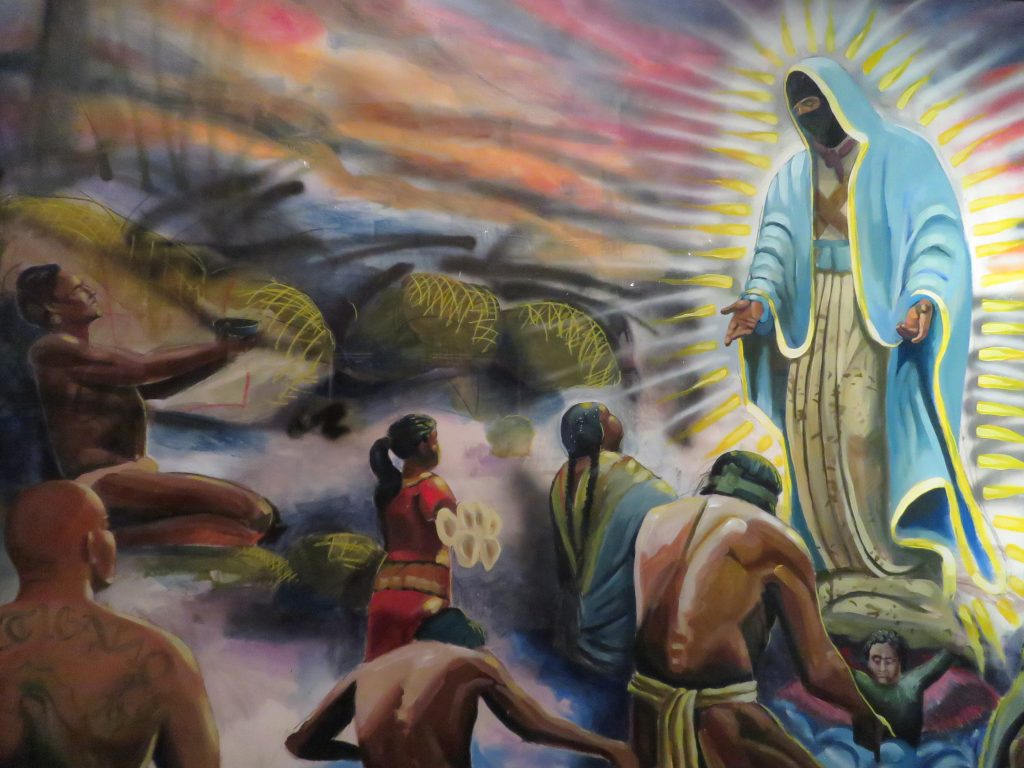 Artist Vincent Valdez draws upon the catholic tradition the “Stations of the Cross” in a series of striking illustrations of a Mexican American boxer, in a series called “Stations.” 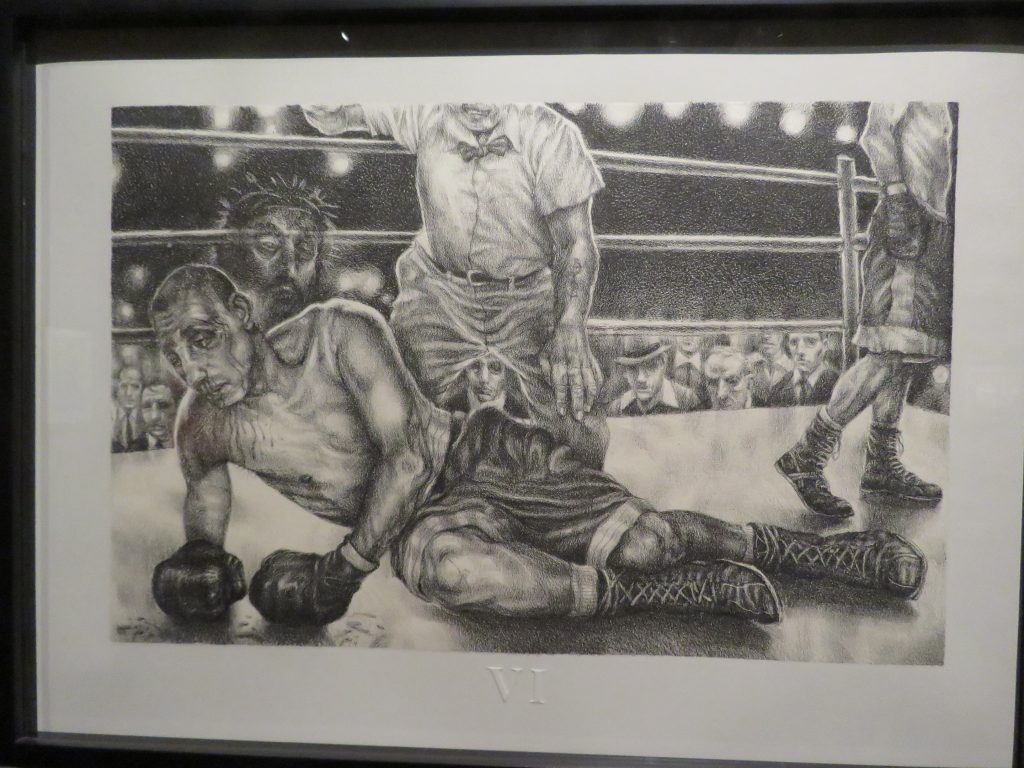 Vincent Valdez. “VI: They Say Every man Must Fall” from the series “Stations” (2005). Lithograph.

Others employ traditions of Mexican folklore, like artist Sonya Fe, whose works re-tell the story of La Llorona (“The Weeping Woman” or “the cry”), a woman condemned to wander for all eternity until she finds the bodies of her drowned children. 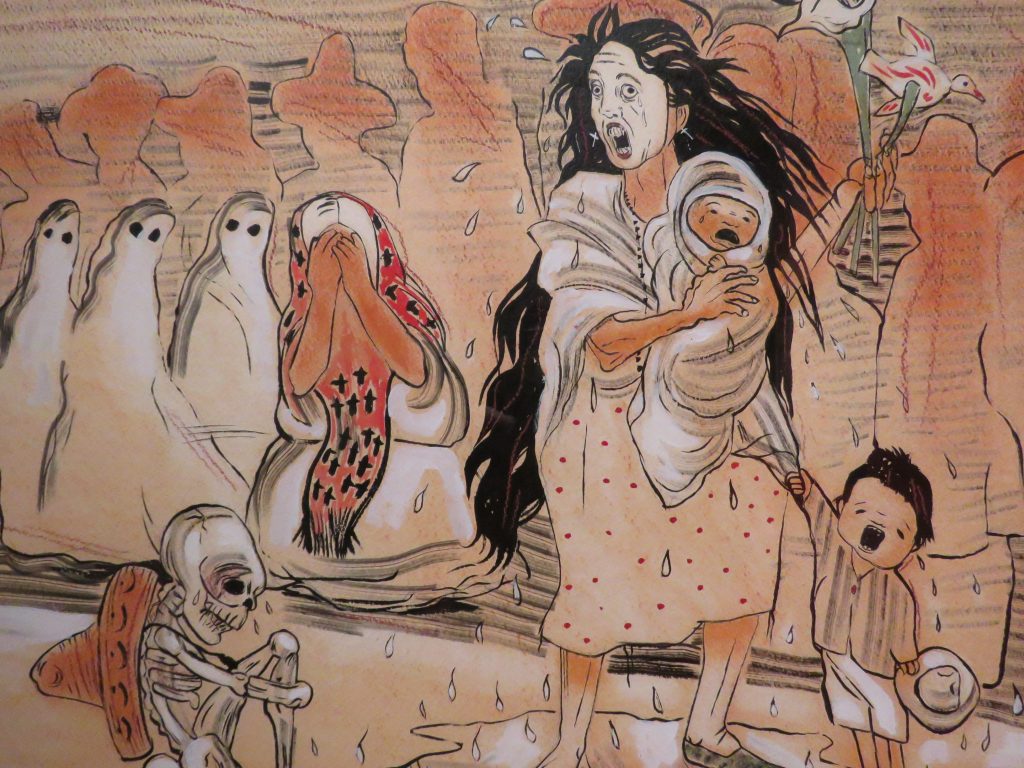 Many pieces in the exhibit deal with the issues of Mexican-American representation and identity. A striking series by Carlos Donjuán “draws upon the diverse idea of people who wear many masks while living in America in order to survive and to create and understand their identity.” 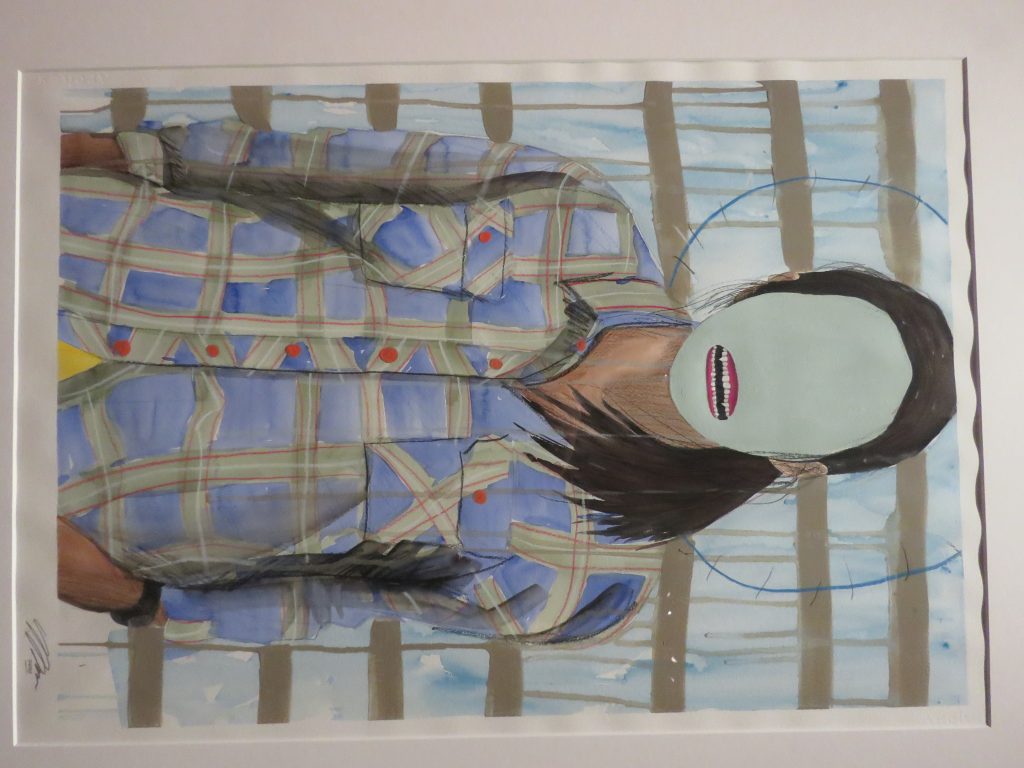 In addition to established Chicano voices, the exhibit also includes a number of sriking emerging artists, like Wenceslao Quiroz, who is originally from Mexicali, but now lives in East LA. He has worked with the muralist art collective East Los Streetscapes, and has been commissioned to paint several murals with at-risk youth in the communities of East Los Angeles and Boyle Heights.

In his introduction to the exhibit, Cheech Marin writes, “Since I began collecting, my mantra has been: ‘You can’t love or hate Chicano art…unless you see it.’ Hopefully, you will absorb these wonderful artworks and be changed in the process.”

Curator Cris Scorza writes, “This selection of works on paper embodies the desire of a collector who not only recognized the eminence of Chicano art, but who also seeks to share the richness of Chicanismo, which despite its struggles, fights passionately to be seen as one of the cultures that makes America what it is today.”

“Papel Chicano Dos” is on exhibit until July 14.