At their August 6 meeting, Fullerton City Council decided not to enact a temporary rent hike moratorium for mobile home parks. The item was originally placed on the agenda at the request of council member Jan Flory, in an effort to provide some relief for mobile homeowners of Rancho La Paz, who are facing drastic rent increases following the purchase of the park earlier this year by John Saunders. 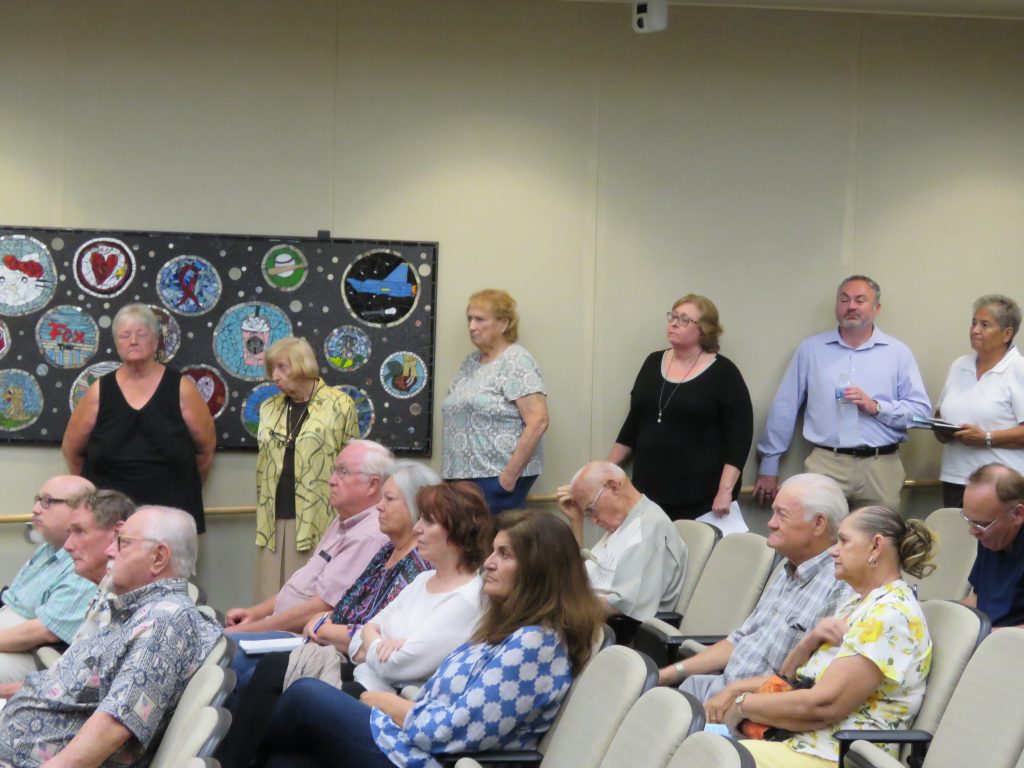 Residents of Rancho La Paz line up to speak to Fullerton City Council.

Flory began the meeting by saying that, after meeting with Saunders and his representatives, she no longer supported the rent hike moratorium.

“I believe we have come up with a compromise that will help get us over the hump and avoid having to enact this ordinance,” Flory said.

-The park will remain a senior park for 5 years, after which it may be converted to another use.

-A private rent subsidy “safety net “program will remain in place for 6 years, although Saunders said he would not write that into the lease agreement. The subsidy application asks not just for income information, but at assets such as pension plans, IRAs, bank accounts—as well as information on family members’ employers, etc.

-The park owner will approve new buyer applications within 10 business days, to prevent delays for those wishing to sell their homes. 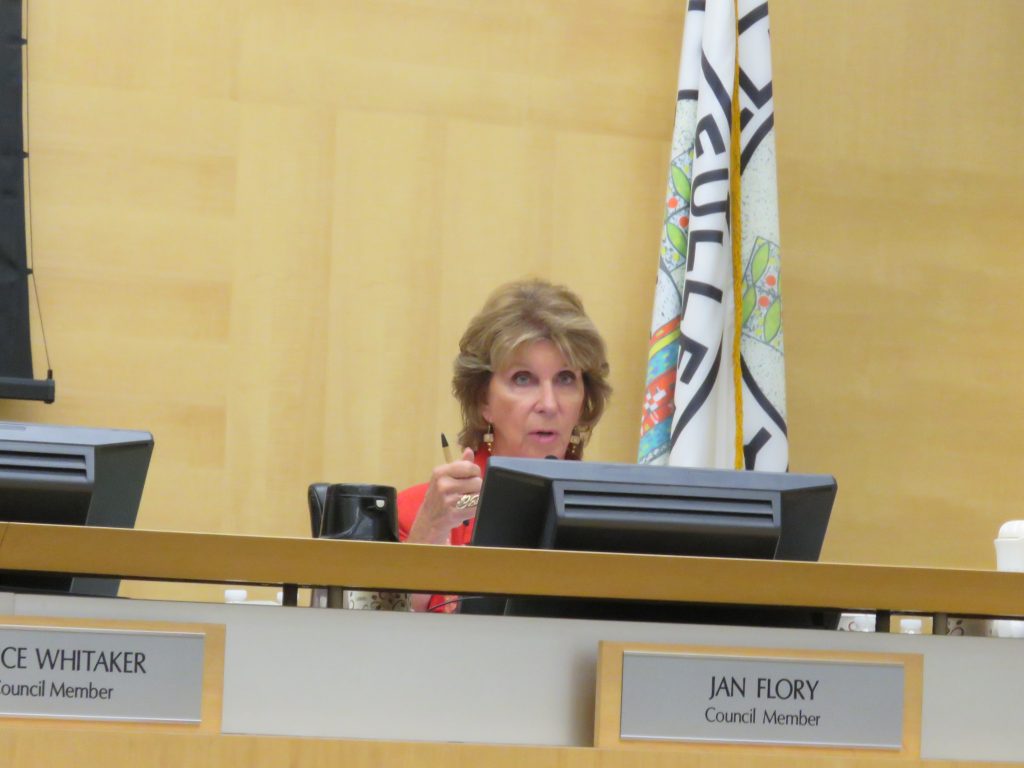 Council member Jan Flory explains why she changed her mind about the rent hike moratorium.

Flory said that it was Mr. Saunders’ position that if the council enacted the rent moratorium, he would withdraw his proposed private “subsidy” program. She also expressed concern that Saunders would sue the city if they passed the ordinance.

Flory said she was concerned that because the rent increase notices were dated July 1, the moratorium would not help tenants, and could actually hurt them.

“I am concerned that, were I to push this forward, if our council were to move forward with this interim ordinance, that I would put you all in jeopardy, worse than you are right now,” Flory said, “I think the best course is to live with the concessions that were granted by Mr. Saunders.”

During public comment, residents of Rancho Paz and their supporters expressed disappointment in council’s decision not to enact the rent hike moratorium.

“You talk about property rights and business returns, and I ask you, What about the property rights of the homeowners?” Todd Harrison, a Rancho La Paz resident, asked. “Does Mr. Saunders and his secret list of investors have the right to functionally evict us and render many homeless?” 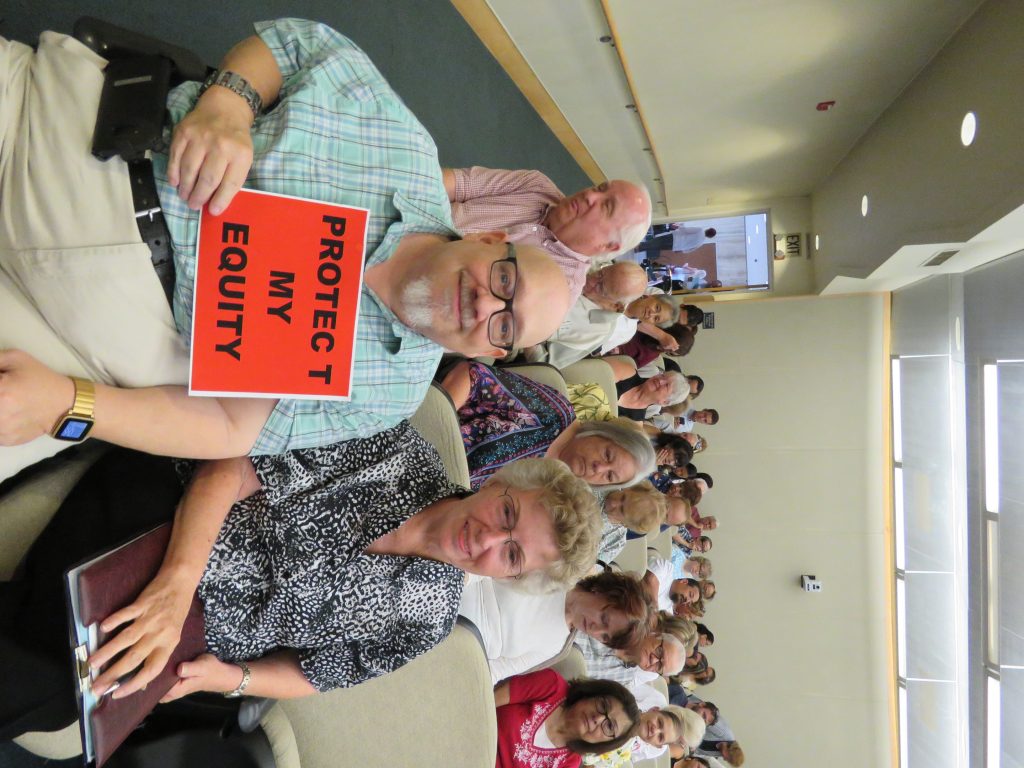 June Perez, another Rancho La Paz resident who has helped organize the residents, said “I don’t have words. The first thing I thought of when we heard there was an ordinance coming down was, ‘What dirty trick is John Saunders going to pull so that we, the people of Rancho la Paz, will have to submit? We had no power. We knew that. We had nothing. The law wouldn’t protect us. Common decency didn’t protect us…Just know that many are going to be heartbroken tonight.” 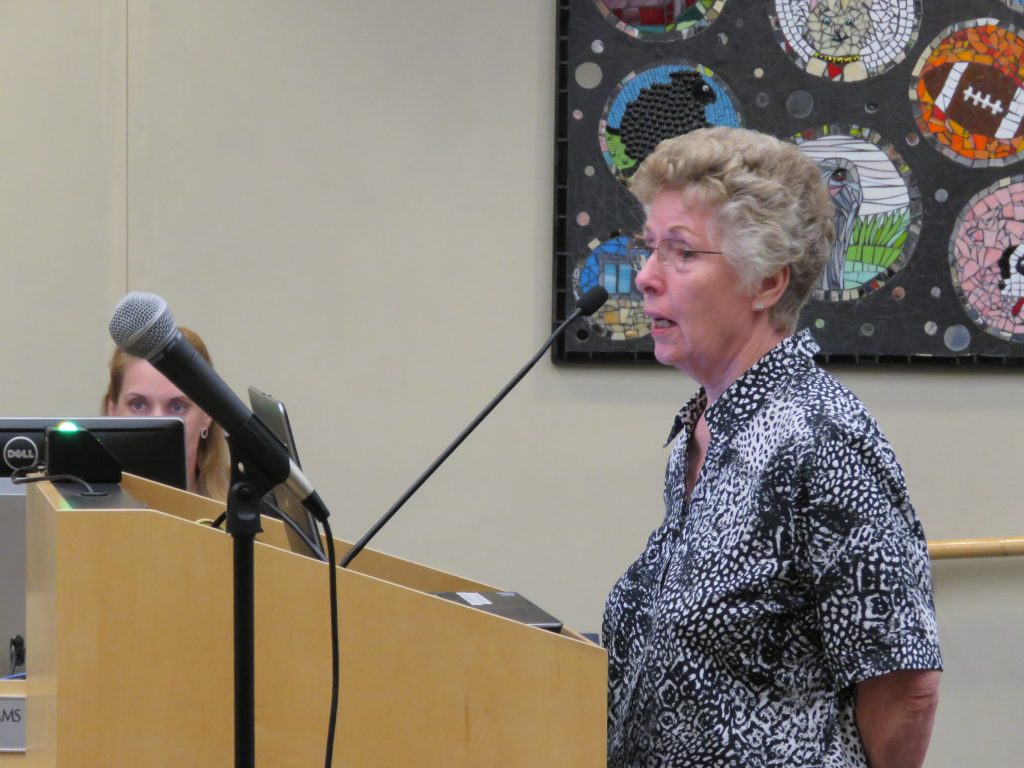 June Perez said she was disappointed in council’s decision.

Cheryl Moi, who lives on the Anaheim side of Rancho La Paz (the park is partly in Fullerton, partly in Anaheim) spoke of the fact than Anaheim city council has been unwilling to help them, voting down a similar ordinance earlier this year. 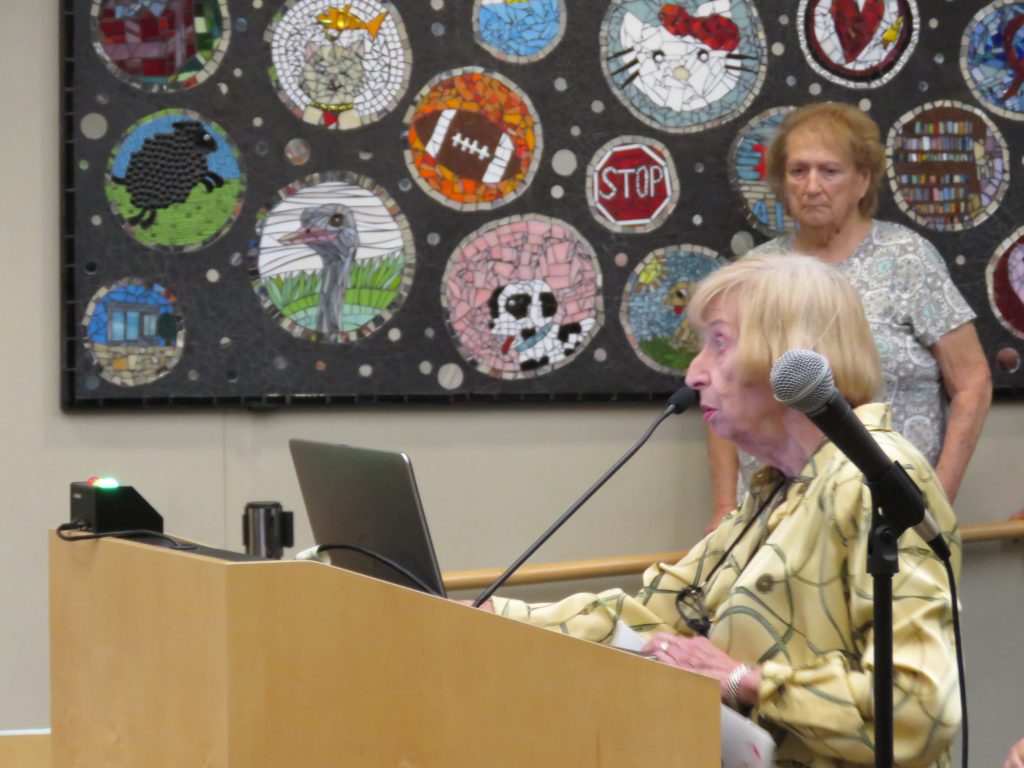 Rancho La Paz resident Rose Mary McLeod, who has spoken at numerous city council meetings on behalf of the residents asked Flory, “Did you meet with the people from our park who represent us as cordially as you met with Saunders and his people?”

“What’s been glossed over is that everyone at Rancho La Paz is a homeowner,” said another resident. “It’s reasonable that new landowners would profit from their investments, but not at the complete expense of the existing homeowners.” 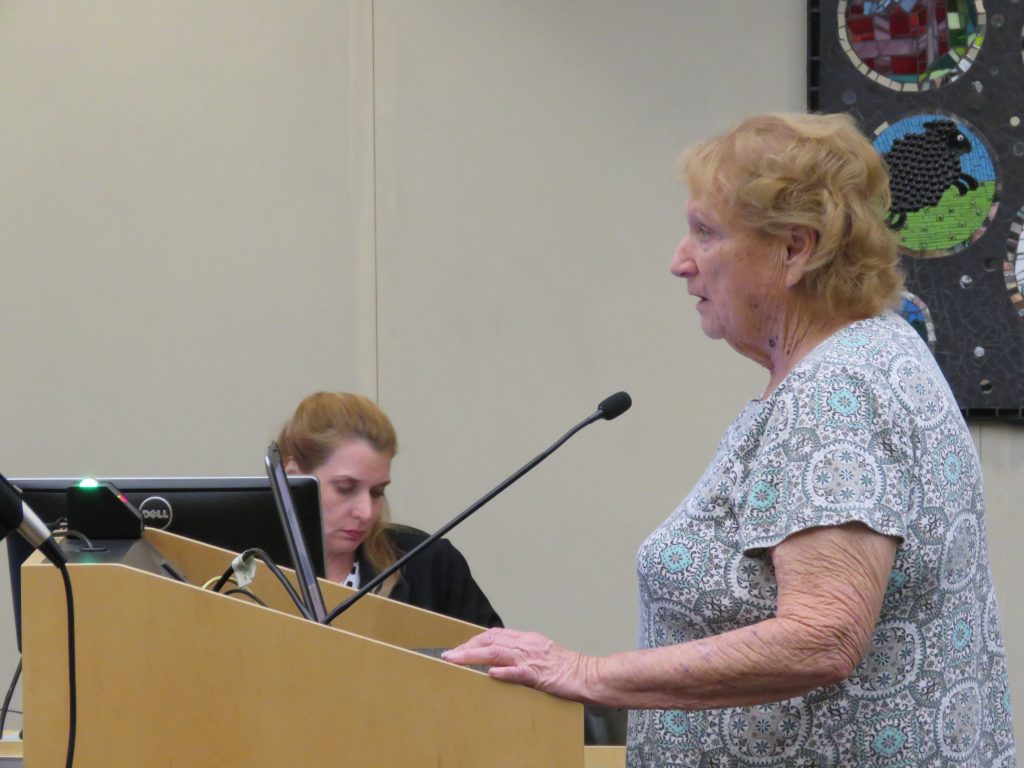 Lupe Ramirez, President of the newly-formed Rancho La Paz Homeowners Association said she was part of the group that negotiated, or attempted to negotiate with Mr. Saunders to scale down his originally-proposed 40-70% rent increases.

“What we walked away with was pretty nasty rent increases, [and] not anything that ever was really negotiable,” Ramirez said. “You’ve been flim-flammed by him, Jan Flory.”

Ramirez said that the park residents did not accept the “negotiated” rent increase schedule “because it is not something we can pay.”

“In negotiations he [Saunders] actually told us that we need to think about whether we want to go out and eat and buy clothes, or pay our space rental,” she said. 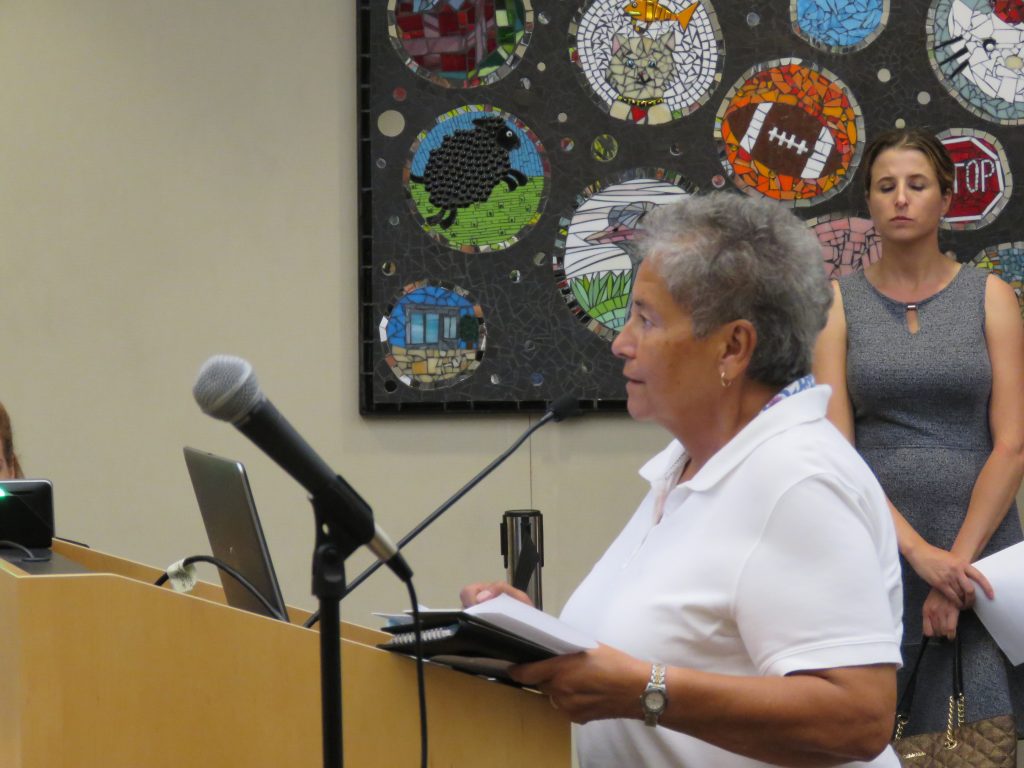 Jorge Rivera, a representative of Tenants Together, a renters rights organization, said “It floors me to hear that, in one breath, you all are talking about dealing with your homelessness crisis, and yet you have an ability to actually keep people in their homes right now, tonight, and yet you’re not going to do that? You think these folks have any income increases coming to them any time soon? Do you think they’re going to be able to afford this?”

Mary Jo Baretich of the Golden State Manufactured Homeowners League (GSMOL), said that John Saunders has a very poor track record regarding his other mobile home parks, such as Huntington Shorecliffs.

“I know first hand about that, where numerous homeowners lost their homes due to very extreme rent increases. His first act at that park was to cancel the existing homeowner leases…he then raised the rents to $110 more immediately. Then he cancelled section 8 housing vouchers, causing 22 senior couples to leave…Then he raised the rents again, causing an additional 130 homeowners to abandon their homes…a few of these homeowners moved to Rancho La Paz, and now they’re facing the cruelty and elder abuse from the same park owner once more. Based upon what factually happened at Huntington Shorecliffs…there is no guarantee that he will not cancel the subsidy…and very few people will actually qualify for the subsidy,” Baretich said.

A handful of industry representatives, and other Fullerton Mobile Home Park owners, spoke against the ordinance. 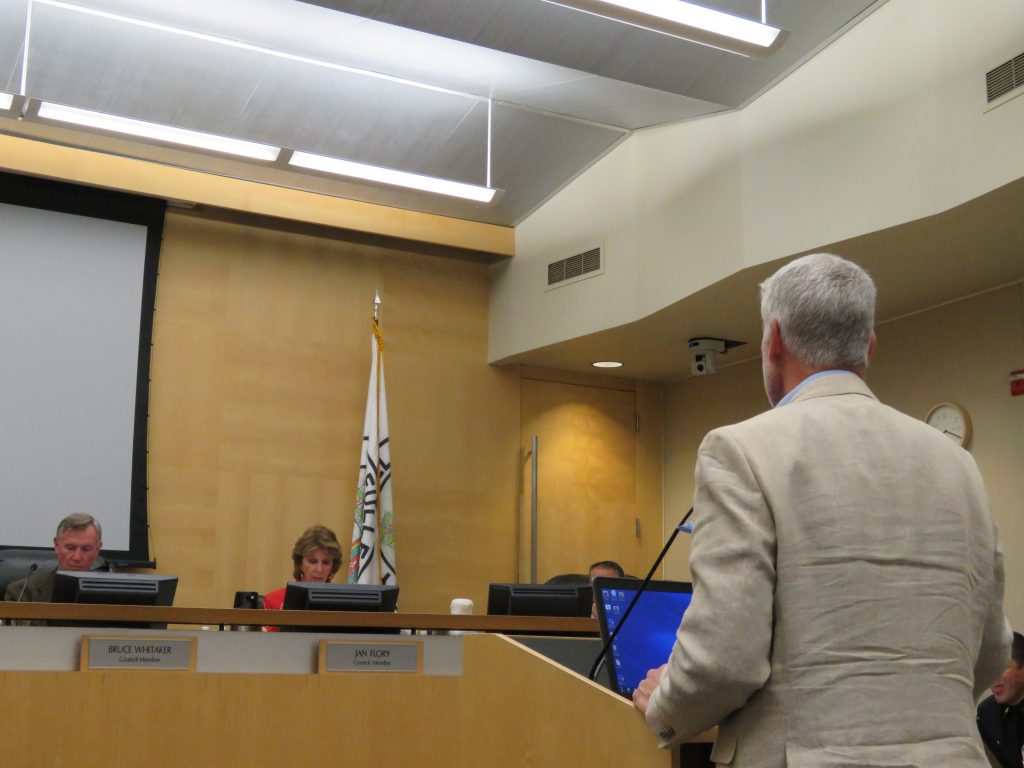 Christine Schachter, from the Pacific West Association of Realtors, an industry association that contributes to political candidates who oppose rent control, read from a prepared statement against “rent control.”

Clay Haig, manager of Country Place Mobile Home Park, said that the moratorium would hurt other mobile home parks, like the one he works for.

Susan James, owner of Rancho Fullerton Mobile Home Estates, said, “What is happening at Rancho La Paz is unfortunate, yet the imposing of a temporary 6-month ordinance is not the answer. It will not help anybody…The proposed ordinance will [negatively] affect the other 5 parks in Fullerton that have been operating smoothly for years.”

Julie Paule from the Western Manufactured Housing Communities Association said, “We’re opposed to the proposal and ask that you reject it. It’s overreaching and heavy-handed.” 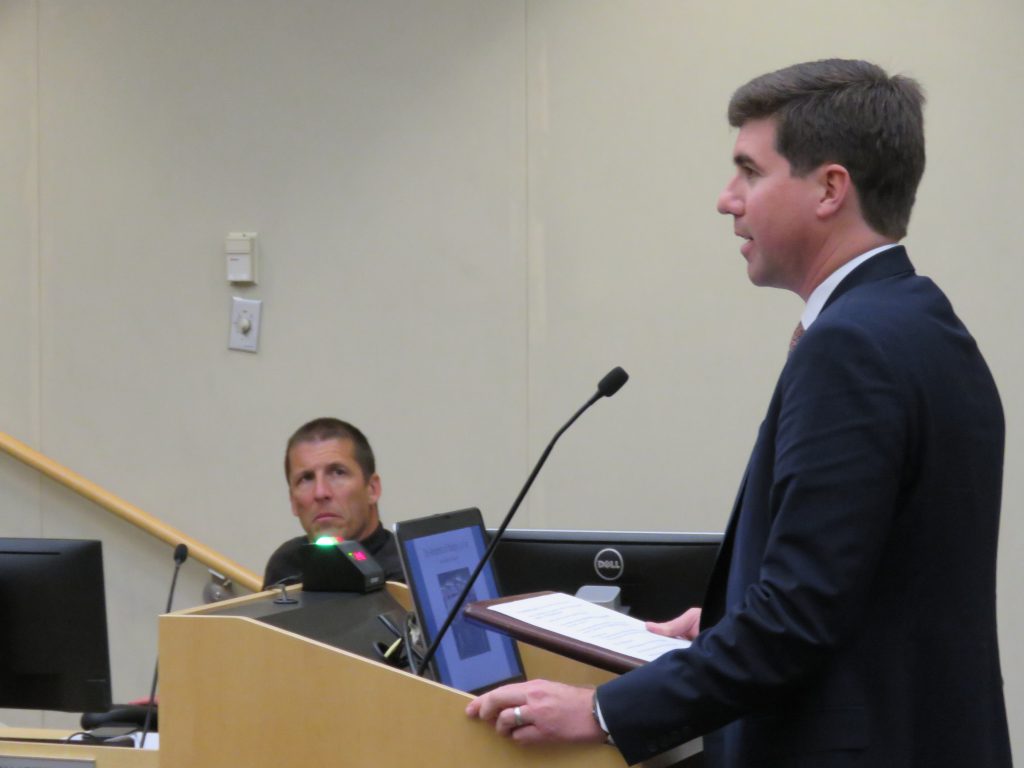 Adam Wood, from the Building Industry Association echoed these sentiments: “Rent control comes with a lot of deleterious impacts. We are very pleased to see the city go in a different direction.”

After comments from members of the public, city council weighed in on this issue before taking no action.

“I don’t see currently that we have a majority to pass what was on the agenda,” Mayor Jesus Silva said. “And even if we did, in speaking with our attorneys, there may be a chance that we put the residents in a bigger hole with them having higher rent increases.”

He said that the city is also looking at bringing back its Tenant-Based Rental Assistance Program.

Mayor Protem Jennifer Fitzgerald said, “I do appreciate the further concessions that council member Flory was able to get with the ownership here.”

Council Member Ahmad Zahra said that he was “disappointed” and “heartbroken.”

“We clearly don’t have the votes for anything that is on the agenda right now,” he said, and echoed Mayor Silva’s support for a Tenant-Based Rental Assistance Program.

Council Member Flory said, “Your remarks are heartbreaking, but when I looked at the ordinance…then I realized that the homeowners are at risk here…keep in mind that we’re not just representing the residents of Rancho La Paz, we’re representing all of the Fullerton residents, and this city is embroiled in ever so many lawsuits that cost us many millions of dollars.”

She said that the concessions she got from Saunders put the residents of Rancho La Paz “in a better position” and “took the onus off the city to have to bear untold hundreds of thousands of dollars in litigation fees.”

“Seriously, I thought that this was an improvement of your position, and I’m sorry that it is not. All of us on this dais owe a duty to all of the residents of Fullerton, and we cannot be racking up these kinds of attorney’s fees on what I view to be a lost cause,” Flory said. 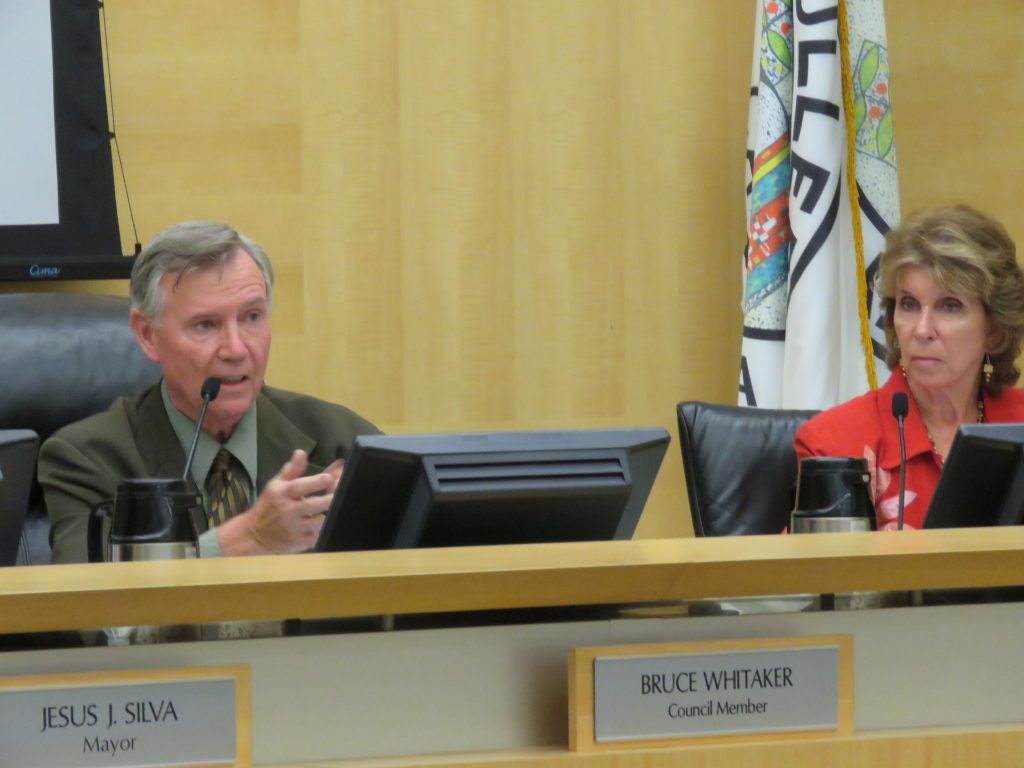 Bruce Whitaker is “not a big supporter of rent control”

“I’m not a big supporter of rent control or other forms of price controls,” council member Bruce Whitaker said. “Generally, we’re all served as consumers by having markets work. I think this is a special case where you are limited in that your asset, your home, is so much connected to these increases. As those happen, the value of your home drops precipitously, so I think that’s a fairly unfair situation that you’ve been dealt…I think the tools we have available are limited.”

Council voted 5-0 to “receive and file” the item, thus taking no action.