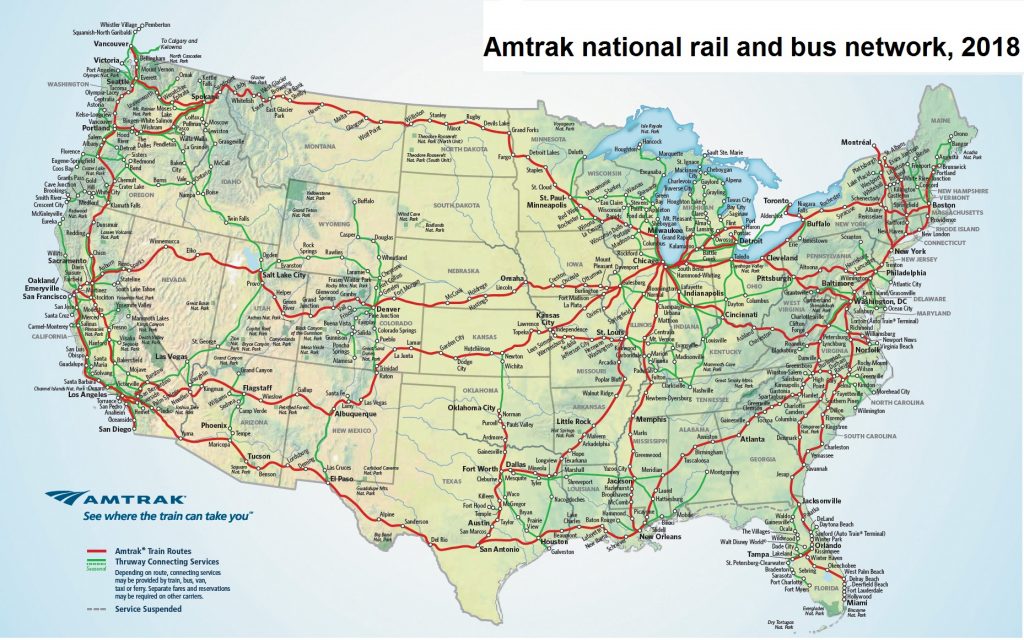 Amtrak is the brand name of the National Railroad Passenger Corporation, the national intercity passenger railroad of the United States. After the Santa Fe, Pacific Electric, Union Pacific, and Southern Pacific (described in previous articles in this series), Amtrak is historically the fifth railroad to serve Fullerton. Between 1971 and 1994, it was the only passenger railroad serving the city. Amtrak also provides train engineers to operate Metrolink trains, which began serving Fullerton in 1994.

Amtrak currently serves more than 500 destinations in 46 states and three Canadian provinces along 21,200 route miles. Each day, nearly 90,000 passengers ride over 300 Amtrak trains. Amtrak owns approximately 623 miles of its own track, of which 453 miles is the Northeast Corridor between Washington, D.C., New York and Boston (the nation’s busiest passenger rail route). Nearly three-quarters of Amtrak’s route miles are run on tracks owned by freight railroads. Amtrak pays these host railroads for the use of their track, dispatching, and other resources required to operate passenger trains. Amtrak operates over 1,500 passenger cars, and over 500 locomotives. Of these, 102 passenger cars and 38 locomotives owned by the state of California (Caltrans owns the equipment of the Pacific Surfliner and Capitol Corridor services).

Amtrak took over medium- and long-distance passenger services from private U.S. railroads in 1971.

It is a quasi-public corporation, with the vast majority of its stock owned by the U.S. federal government, and a small percentage owned by the major freight railroad companies. Amtrak is governed by a board of directors, whose nine members are appointed by the President of the United States and subject to approval by the Senate. One member of the board is the U.S. Secretary of Transportation.

In FY2017, Amtrak carried 31.7 million passengers with $3.3 billion in ticket revenue and an operating loss of $171 million. A combination of federal and state government subsidies, totaling about $1.5 billion annually, represent about a third of Amtrak’s total budget. Despite its ongoing challenges and limitations (to be discussed in future articles in this series), Amtrak’s ridership continues to increase.  Ridership in FY2017 was 1.5% greater than FY2016, and a more than 50% increase from FY2000.

The Amtrak trains which serve Fullerton are the Pacific Surfliner and the Southwest Chief. Between these two services, Amtrak offers direct daily service from Fullerton (with no change of train) to 53 destinations — from San Luis Obispo to San Diego, east to Albuquerque, Kansas City, Chicago and points in between. In 2018, 279,977 Amtrak train passengers arrived or departed at Fullerton, an average of nearly 770 per day. Two thirds of Fullerton passengers traveled less than 100 miles. Amtrak’s Thruway bus service also handled 30,276 bus passengers getting on or off at Fullerton, or about 83 per day. Many of these people spend money at restaurants, bars and stores in downtown Fullerton while passing through to get on or off Amtrak trains and buses. Amtrak thus provides economic benefits to our city, along with a choice of intercity travel. 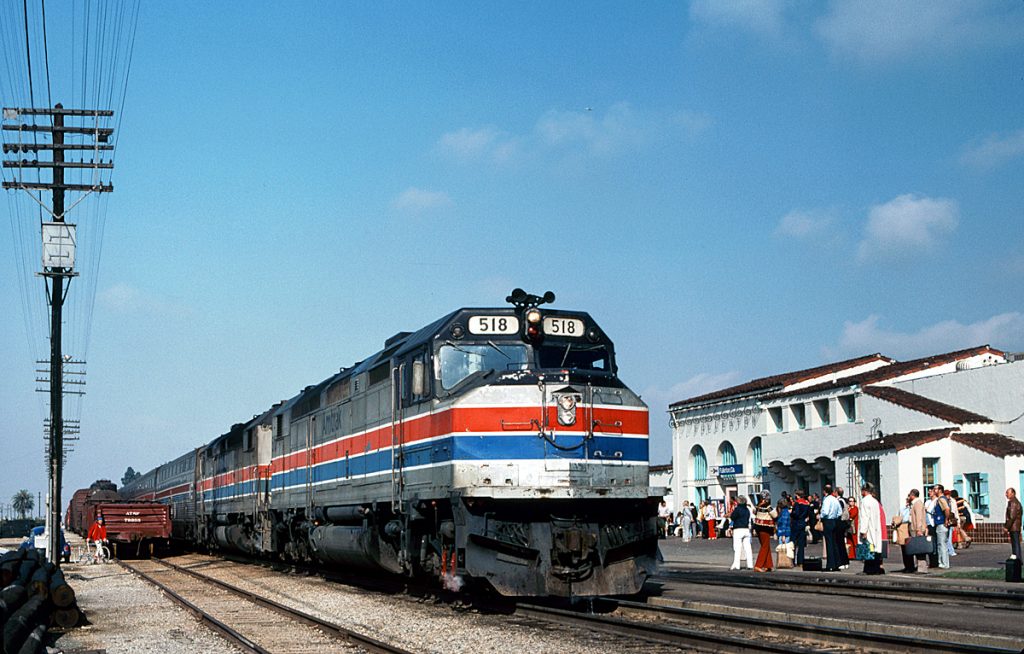 Amtrak’s Pacific Surfliner route, between San Diego and San Luis Obispo via Los Angeles, carries nearly 3 million people each year.  It is the second-busiest intercity passenger rail corridor in the nation, behind only the Northeast Corridor between Boston, New York and Washington, D.C. In 2018, 257,822 of those Surfliner passengers arrived or departed in Fullerton, or just over 700 per day. Twelve trains per day roll each way between Los Angeles and San Diego.

Each evening, the eastbound Amtrak Southwest Chief makes its first stop in Fullerton going east on its way from Los Angeles to Albuquerque, Kansas City, Chicago, and points in between. Early each morning, the Chief makes its last stop before Los Angeles, heading westbound from Chicago. In 2018, 22,155 Southwest Chief passengers arrived or departed in Fullerton, or an average of about 60 per day.

Amtrak’s defunct Desert Wind, which ran between Los Angeles, Las Vegas and Salt Lake City, stopped in Fullerton between 1986 and 1997. There has been consideration of restoring this service at times over the past two decades. Unfortunately, funding constraints and freight train congestion issues on the tracks over Cajon Pass have so far prevented it.

The history, present, and future of Amtrak will be explored in future articles in this series, in upcoming issues of the Fullerton Observer.