For many years, cities like Fullerton had one primary (legal) tool for dealing with the visible presence of homelessness in the form of encampments—anti-camping ordinances that prevented people from sleeping overnight on public or private lands. Last year, a court decision, Martin v. Boise, essentially took that tool away from many cities, including Fullerton.

Under Martin v. Boise, cities may not criminalize sleeping in public places if there are not adequate shelter bed spaces in the city. According to the court, “the government cannot criminalize indigent, homeless people for sleeping outdoors, on public property, on the false premise they had a choice in the matter.”

As of today, Fullerton does not have a permanent year-round homeless shelter, and thus may not enforce its anti-camping ordinance.

The legal precedent established by Martin v. Boise grew out of an interpretation of the Eighth Amendment of the US Constitution and its prohibition on cruel and unusual punishment—in this case—criminalizing poverty.

In the past several months, a fairly substantial homeless encampment has been established along Gilbert St. in west Fullerton, adjacent to St. Philip Benizi Catholic Church. 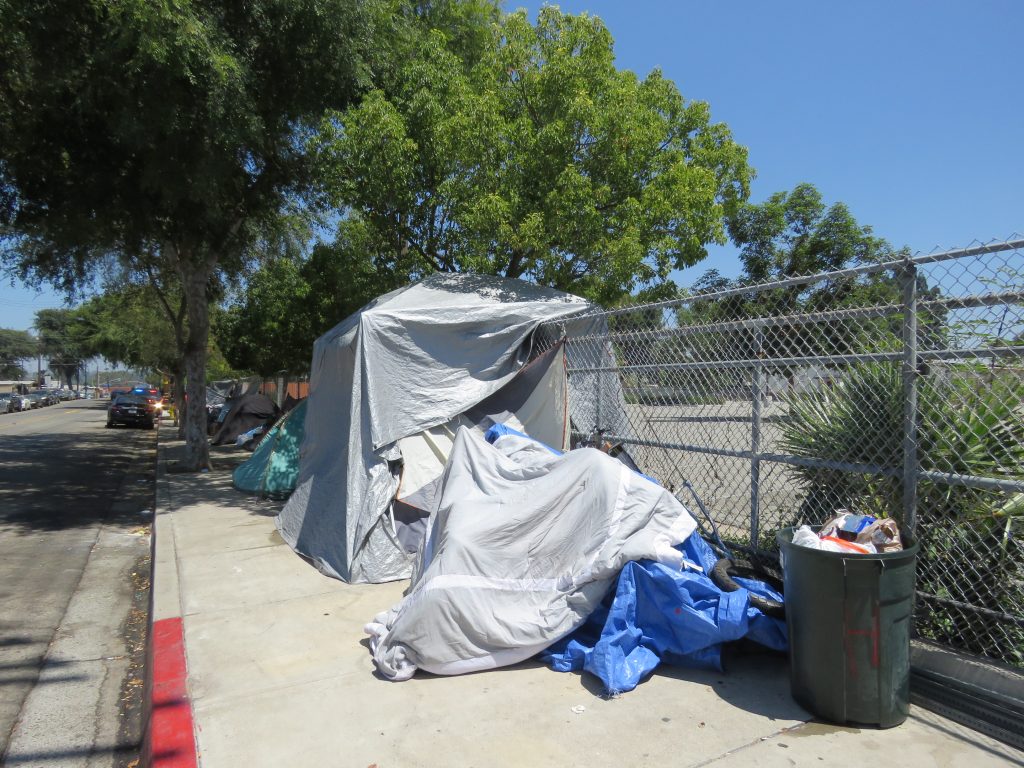 At the August 6 Fullerton City Council meeting, a few residents of west Fullerton expressed their concern about the homeless encampment that exists in their neighborhood.

One resident said that kids in the area don’t feel safe with the encampment, and spoke of drugs, trash, feces, and urine.

“What happened to the enforcement that was going to be happening—the street sweeping, the cleaning? I don’t see any of that,” she said.

Another resident named Laura, who lives near the Gilbert encampment, said, “We have three kids under 5 and it’s been a really big issue. We have to call the police pretty often…We feel unsafe just in our own front yard now…We’re just hoping that you guys can help right now.”

Another resident blamed St. Philip Benizi church for “bringing” the homeless to the area when they opened their grounds to let homeless folks sleep there. For two years, Father Dennis Kriz allowed a certain number of homeless people to sleep on his church grounds. Now, those folks are sleeping on the sidewalk adjacent to his church, next to a large sign declaring to the city, “Build a Shelter.” Recently, hundreds of members of the faith community packed city council chambers, successfully encouraging the city to declare an “Emergency Shelter Crisis”—with the intent of making it easier to build shelters. 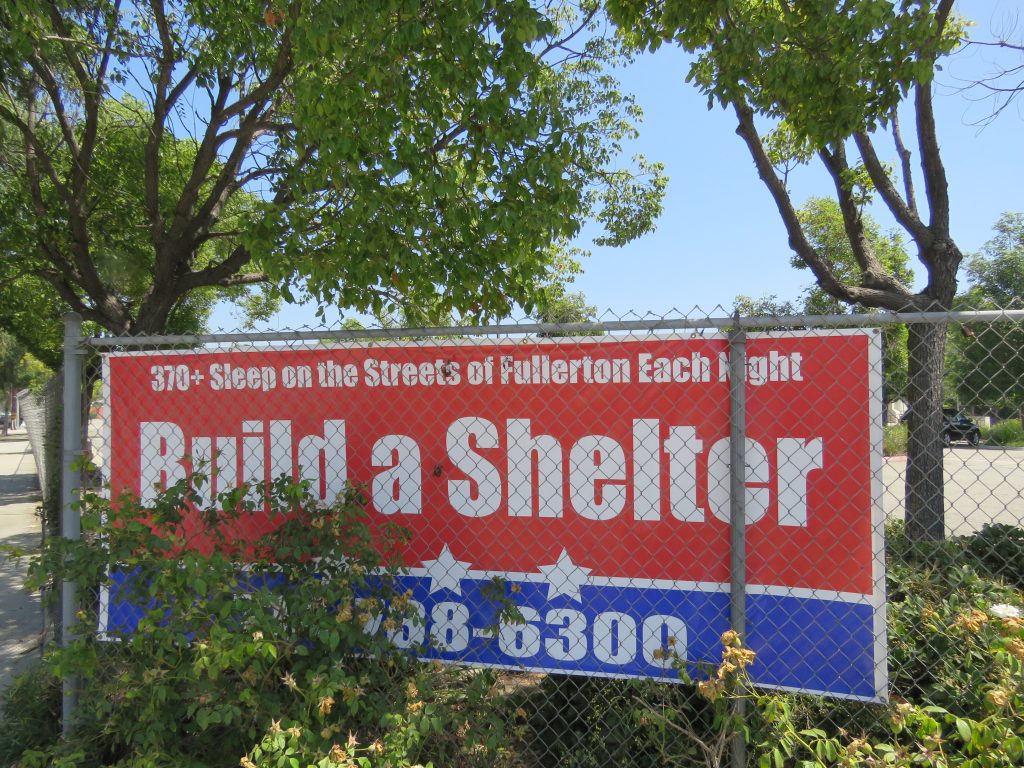 Sign on St. Philip Benizi church fence near the encampment.

“There needs to be more [shelter] capacity,” City Manger Ken Domer said. Currently two shelters are being built in Buena Park and Placentia, with state funds in coordination with 13 cities of north Orange County.

Domer said that CityNet, the city’s contracted homeless outreach services, has increased their outreach in that area to five times a week.

He said that one challenge to getting folks into shelters is the lack of mental health services, and that now, through the court, CalOptima is getting involved, which is the delivery system for mental health and services—MediCal.

Mayor Protem Fitzgerald requested that the mayor send a letter to the CalOptima Board, requesting their assistance.

“CalOptima has charge over programs for the mentally ill, who need to get out here on the streets with us to assess the people who are out there so that they can get the help they need,” Fitzgerald said.

Fitzgerald said that local churches, under a recent city ordinance, have the ability to provide shelter for up to 12 homeless people, so long as the church meets certain requirements (the shelter must be indoors and have bathroom facilities).

“I know quite a few churches in town who have that ability, and tomorrow this could be solved if the churches would quit telling the government we need to solve this problem, and take up the mantle to provide the hope that these people need to get off the street. So I encourage you to look to the faith community in this town to step up to the plate here and help our residents and help these people get the help they need,” Fitzgerald said.

Council Member Whitaker said, “What I’m hearing from residents is they really want to see some actions. They want to see when they put in a call, when they feel threatened, when there is a hazard that needs dealing with…When that happens, we need to, as a city government, respond rapidly. We have safety issues, clearance issues, sidewalks being blocked completely bleeding out into streets and creating hazards there as well.”

Whitaker said, “I understand that people have rights, but those rights shouldn’t supercede our ability to transit streets and sidewalks safely throughout the city.”

Domer said that the city recently cited a couple homeless folks for blocking the sidewalk and preventing disabled persons accessibility. However the city’s ability to “clear” the camp is constrained by Martin v. Boise, and the recently-settled Orange County Catholic Worker case.

The city manager added that homelessness itself is not a crime, so people cannot simply be arrested for sleeping on the streets, although if there is a criminal act associated (drugs, etc.), then they can enforce that.

I visited the encampment, and St. Philip Benizi church, on August 15th to see things for myself. I first met with Father Dennis, to ask him why his church doesn’t open up 12 shelter beds, as is allowed under city ordinance.

He said that, according to the most recent Point in Time count, there are around 370 homeless folks in Fullerton—thus sheltering 12 people would put a small dent in the problem, when the city has the ability to open a shelter that would help hundreds.

Regarding the upcoming shelters in Buena Park and Placentia, the city has 35 slots in each of those, so even those will be inadequate to meet the total need.

“In this, our main role is advocacy. We can help with volunteers. But when you have a problem where there’s 370 people…This is where government is useful—you build one thing that takes care of all of them, and perhaps you can assign the churches to volunteer,” Father Dennis said.

I headed out to the encampment, and noticed that Fullerton’s Homeless Liaison Team, along with CityNet, were doing their regular outreach, offering a connection to existing services. 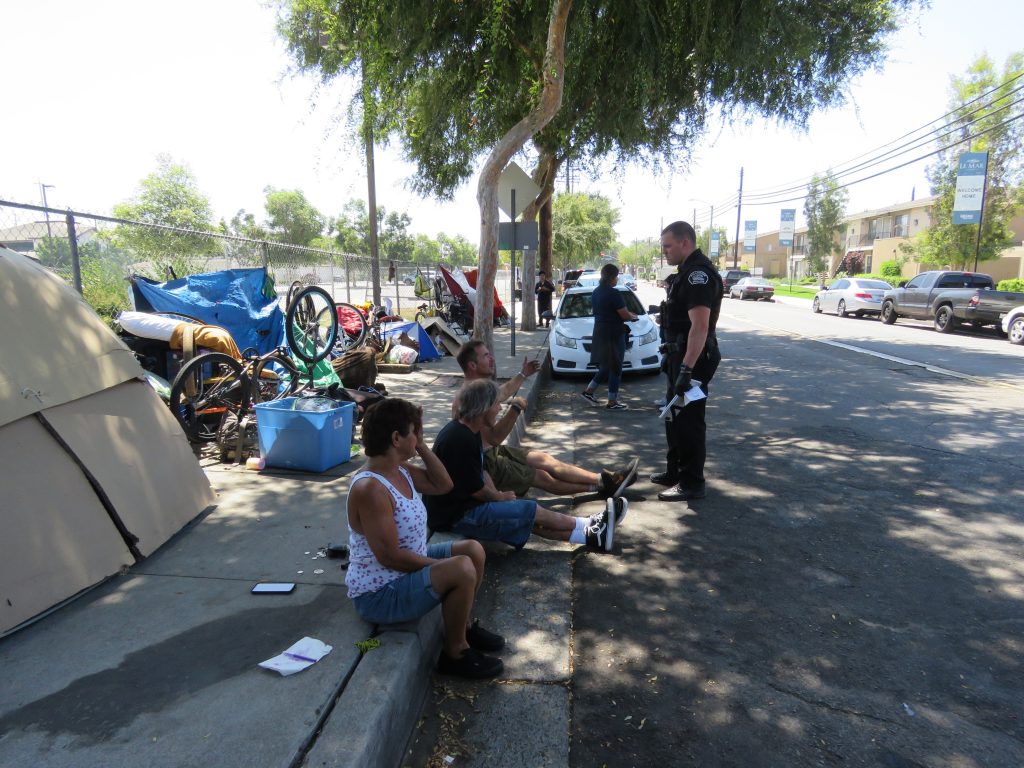 A homeless liaison officer speaks with a man at the encampment who was caught smoking meth.

Two men were seated on the sidewalk, and an officer told me they had been caught smoking meth.

I spoke with a couple other men, who were minding their own business on the sidewalk next to a tent. One man named Scott said he’d been homeless for two years due to work gaps and alcoholism.

He said he needs a steady job and a bus pass so he can get to the places he needs to get back on his feet.

Another man named Dave was working on a drawing. He said he’s been homeless for three months because he could no longer afford the $1800 rent on his $14/hour wage.

He said his wife is paralyzed and he couldn’t make enough to house her and their two kids.

“They evicted us. My wife and kids are staying in a motel. We don’t have anywhere to go right now—we bounce around from place to place. I go to work every day from right here,” he said.

It turns out Dave has a job for a publishing company but doesn’t make enough to pay for rent.

I tell him about the Armory shelter opening in October, and ask if he has stayed there before.

“I’ve never been in a shelter in my life. Never been homeless [until now],” he said.

The Armory emergency shelter will re-open on October 15. The Buena Park shelter is set to open in December. There are currently no plans to build a permanent shelter for Fullerton’s approximately 370 homeless. 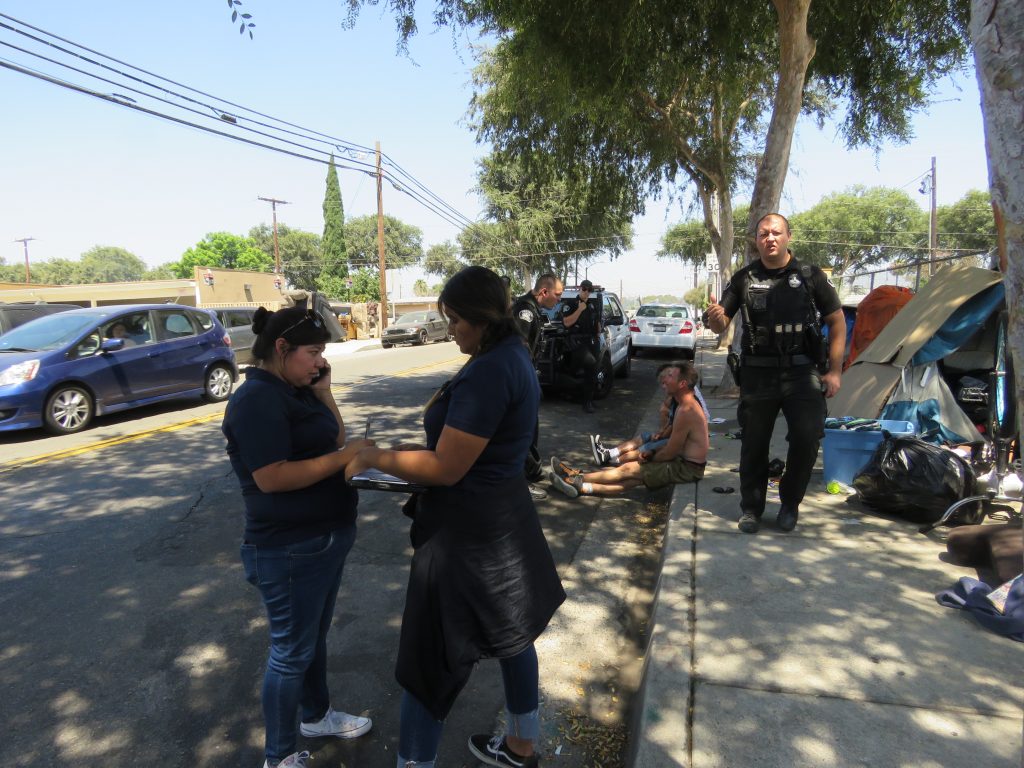