On Tuesday, September 4, local congress member Gil Cisneros, a Democrat who represents the 39th district, held a Town Hall meeting in the Wilshire Auditorium at Fullerton College. This was the third town hall Cisneros has held since he was sworn into office 9 months ago.

Fullerton Mayor Jesus Silva introduced Cisneros, citing some of his legislative priorities, including health care for all, comprehensive immigration reform, and advocacy for veterans. Cisneros, a retired Naval Officer, currently serves on the House Armed Services Committee and the Veteran’s Affairs Committee. 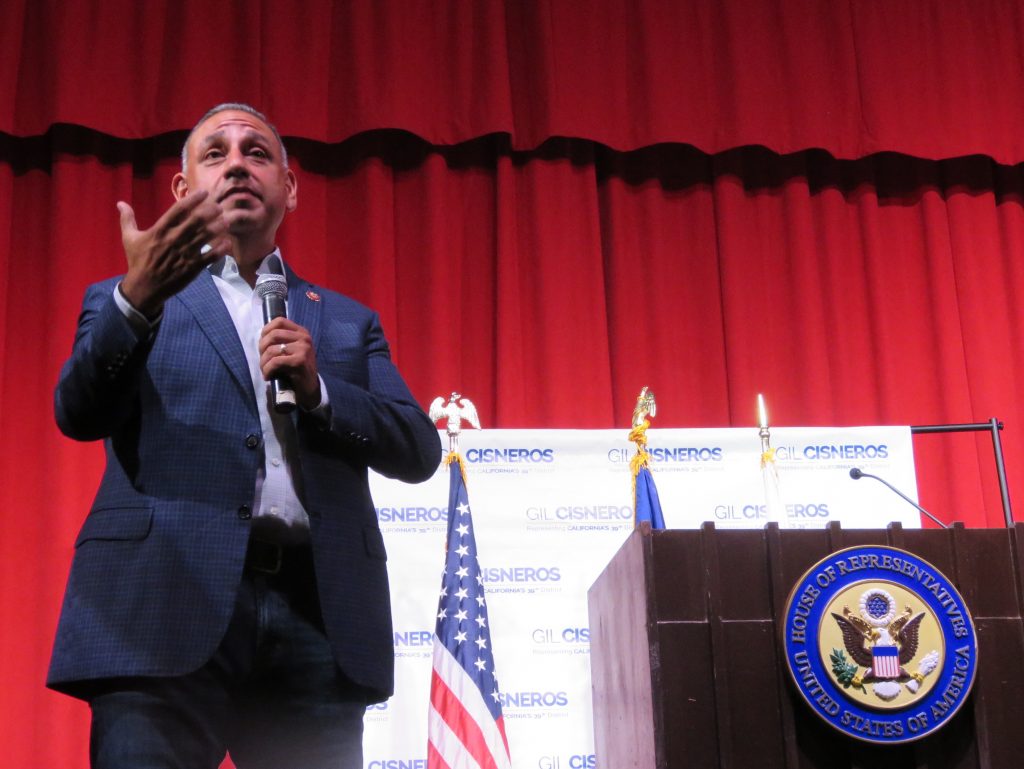 Cisneros began by citing some of bills which the Democrat-majority House of Representatives has passed. However, Senate Leader Mitch McConnell has used his position of power to prevent these bills from coming before the Senate for debate or a vote. Some of these bills include:

-The Paycheck Fairness Act, to make sure women get paid as much as men do.

-The Equality Act to expand the Civil Rights Act of 1964 to prevent discrimination against LGBQ community.

-A Voting Rights Act to get “dark money” out of politics.

Cisneros said he was proud that he got his first two bills to pass in the House: a bill to give literature at the VA that is printed in multiple languages. There are VA hospitals in Puerto Rico and the Philippines, so under this bill VA literature will be printed in both in Spanish in Tagalog.

His second bill is to support women veterans getting out of the service. Women are the fastest-growing demographic in the US military today, and Cisneros’ bill would provide a “transitional assistance program” for women transitioning out of the military—to make sure they know their benefits as veterans. Cisneros said he is confident that this bill will actually get through the Senate.

“I know you hear a lot about butting heads, Republicans and Democrats not getting along,” Cisneros said. “That kind of does happen, but there are some issues that we are working on together.”

He cited two bills that have passed both houses and have been signed by the President:

-The Bluewater Navy bill, to expand benefits to those who were exposed to Agent Orange in Vietnam.

Q and A Session

After his opening remarks, Cisneros opened the Town Hall up to questions from the audience. Here are some of the questions and answers, edited for clarity and space. 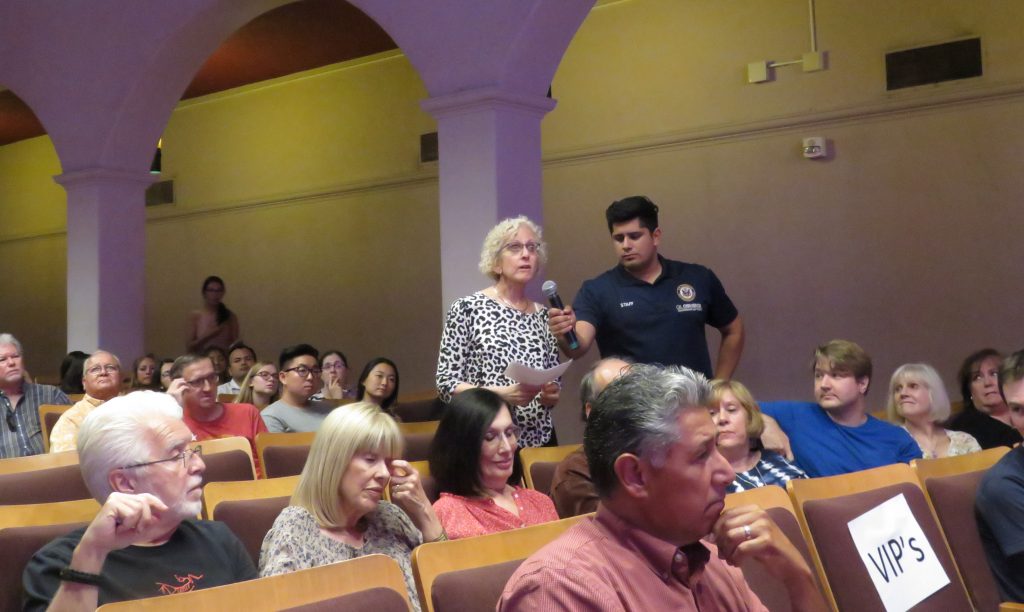 Q: The federal debt is standing at $23 trillion. I am concerned that we are spending money that we don’t have. The debt we are accruing is going to be passed on to our children. What is congress going to do to cut spending?

A: We can’t continue to give tax cuts as the deficit grows. The Trump administration gave a $3 billion tax cut to the wealthy. We need to be more fiscally responsible on both sides of the aisle. The Trump administration requested $18 billion more than what was originally appropriated for the military. We need to make sure that, if we’re going to do programs, we have to have a way to pay for them. We need to have a balanced budget. Right now, there are 12 appropriations bills that go through both houses of congress. The House has already done 10 of the 12. The Senate hasn’t passed one appropriations bill.

Q: I’m very concerned about the horrendous treatment of migrant children. Last week, we learned about deportation of children with disabilities who’ve come to the US to seek care which is not available to them in their country of origin. What can all of us do now that we see this horrendous thing that is happening in our government—what can we all do to put it to an end?

A: I think we need to keep raising our voices. Regarding the deportation of those with disabilities, a lot of these folks have serious conditions where they still need treatment and help. To just send them away, there’s no humanity in that. Constituents need to put pressure on Senate leaders who are not allowing bills to come up for debate. To do nothing is irresponsible. We need to speak up to—Tell them to do their job.

Q: Are you optimistic that you’ll be able to find bipartisan solutions for climate change in Congress?

A: I think eventually. That’s a slow process. There have been some Republicans who have started to acknowledge that climate change is a problem. I was co-sponsor on a resolution that passed in congress to re-enter the Paris Climate Accords. I am part of the Sustainable Energy Environment Caucus, and a member of the Environmental Justice Caucus.

Q: Thank you for your co-sponsorship of the HR 763, the Energy Innovation Act, an important step in solving the climate crisis is putting a tax on carbon pollution. This is a very personal issue for me. I have a four year-old and another baby on the way. I’m deeply frightened for their future. What is the next concrete step that you can take to push that bill further and make sure that polluters are paying a price for what they’re doing?

A: I think we need to keep the pressure on. Here in California, the fastest-growing job sector is the green industry. But I’m going to be honest with you—congress moves slow—it moves at a snail’s pace. The The Trump administration tried to roll back California’s emission standards on vehicles, but has received pushback even from auto manufacturers. Congress needs to do more to protect the air and the water.

Q: Growing up in Fullerton, I had both asthma and bronchitis. I come from a neighborhood that is most impacted by bad air quality.  What can you do in your committees to bring in more funding to electrify our rail system, so we can have cleaner air and more options to get around Orange County?

A: Our roads in the 39th district are really the transportation highways for commerce in the country. California imports over $500 billion of goods from overseas every year. Most of that is coming through Long Beach and Los Angeles. They’re going right through our district—all those rail cars, those trucks. In the LA and OC areas, we have two big events coming up, which should hopefully spark improvements in our public transportation: The World Cup in 2026, and the Olympics in 2028. Some of the events and games will be out here in Orange County. This is an excellent opportunity to really build up our public transportation infrastructure that we need here in the area.

Q: I’m a 30-year plus high school teacher. I’m concerned about rising student debt, especially among students buying degrees that aren’t really helping them for the 21st century. Would you support a bill that would provide more job training for 21st century jobs?

A: Education changed my life. I was the first one in my family to go to college. There’s currently a bill for school infrastructure, so that all the schools have access to high speed internet. We need partnerships with government, labor, business all working together to make sure we have a work force that’s going to be ready for the jobs of the 21st century. Speaking of college debt, we need to create programs where people can give back to their communities in exchange for debt relief—like Americorps. According to research from UC Berkeley,  for every dollar we invest in higher education, we get a $3.50 return. Why would we not want to do that? That’s a great return on investment.

Q: Do you favor of an impeachment inquiry for President Trump?

A: 130 members of congress support an impeachment inquiry, and Judiciary Committee chairman Nadler said that is already going on. I continue to support all the work the Judiciary Committee is doing. When they gather all the necessary information/evidence and comes to the House and says, ‘Here’s the data.’ When we have a real case, we’ll go forward.

To contact Gil Cisneros or visit his office, visit www.cisneros.house.gov.