Reported Hate Crimes in Orange County have increased in the last five years with the largest jump occurring between 2017 and 2018 according to the Orange County Human Relations, which tracks hate crimes and incidents countywide through direct reports and reports from educational institutions, law enforcement, and organizations. This trend has also been seen nationwide.

The highest number of reported hate crimes and incidents involved race and ethnicity or religion. According to the US Dept National Crime Victim Survey, hate crimes and incidents potentially occur 24-28 times more often than reported. Hate incidents include behavior that targets certain groups but does not rise to the level of a crime such as speech protected by the First Amendment right to freedom of expression. Hate crimes involve a criminal threat of violence, assault, murder, or other activity committed against a victim or group because of actual or perceived race, religion, sexual orientation or other aspect of their being. 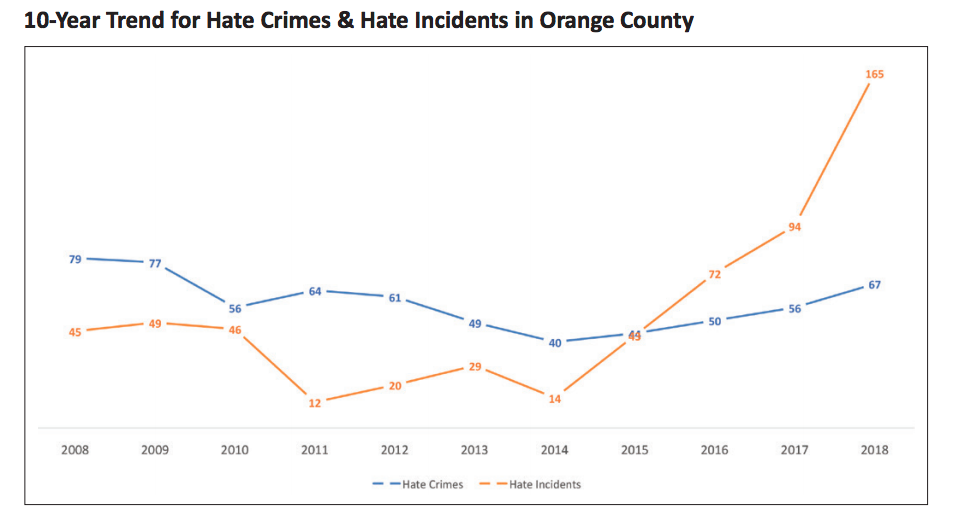 In 2018, 15% of reported hate crimes targeted people of the Jewish faith. The second most targeted groups were Latinos and Middle Eastern, each totaling 6%. Crimes against LGBT community increased from 2 in 2017 to 11 in 2018. Crimes against African Americans 4%; crimes against members of the Asian and White communities were at 3%.

Most hate crimes (21%) involved vandalism, while 16% involved assault. Criminal threats were 3% of the total reported hate crimes while terrorist threats and murder were 1% of the total. According to the Bureau of Justice only 3.5% of hate crimes are reported to law enforcement.

31% of the population of Orange County is foreign born with over half being US citizens. 46% of the county’s residents speak a language other than English at home. There are over 80 faiths practiced in Orange County. OC Human Relations believes that our diversity should be celebrated for the richness and abundance it brings to our county’s social fabric. “All people should live free from harassment, discrimination and violence based on race, religion, sexual orientation, ethnicity, gender, or disability.”