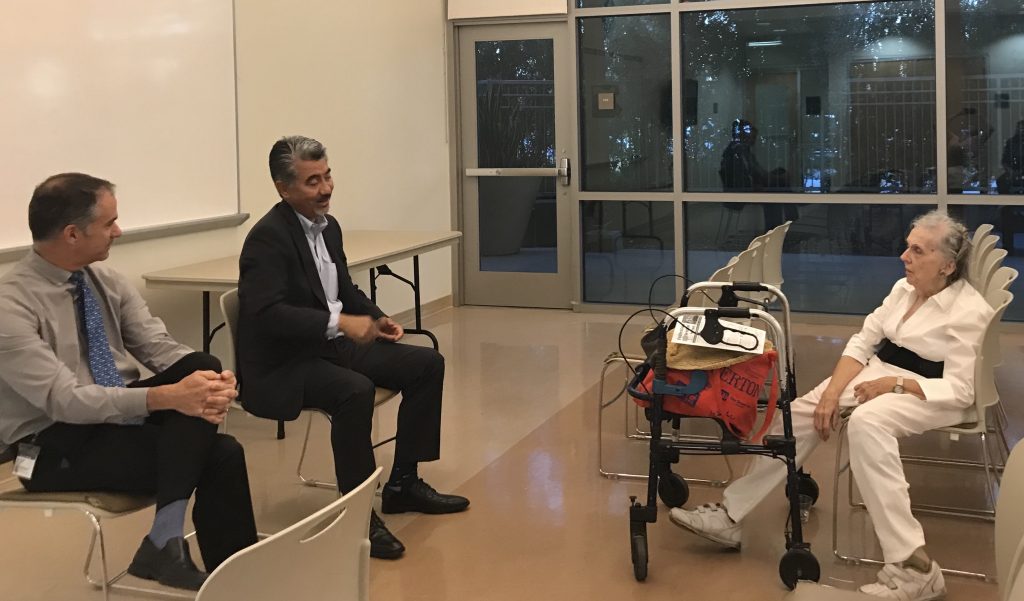 City Manager Ken Domer and Mayor Silva speak with an attendee of the event.

On July 18 Fullerton began a 90 day pilot program to charge $5 for parking at 9 downtown parking lots Thursday through Saturday between 9pm and 1am. Domer said the hours were selected to not deter people coming downtown to have dinner, but to “capture costs from bar patrons” for maintenance and cleanup and for the police to “keep order.”

Employees take up 70% of the main parking lots according to Domer. “Next step” he said is to “ensure employees park a little further away.” Silva said residents are not complaining about people parking on neighborhood streets to avoid paying for parking and restaurants are not seeing an impact. The Spaghetti Factory, however, has added free parking through the “app” for diners who arrive between 9 and 10pm.

The contracted parking franchise uses 2 license plate readers purchased by the Fullerton police department to “know who is there” before 9pm. Those who arrive after 9pm and do not pay using the smart phone “app” or an on-site kiosk receive a parking ticket. About $6,000 has been collected in parking fees each week but that has not been enough to cover the initial costs of the parking program, so the city extended the program to 6 months.

Silva said that they intend to continue paid parking to fund a business improvement district (BID) to “reduce the General Fund subsidy for redoing parking lots,” to maintain sidewalks, to replace the lighting in the trees on Harbor, and to “reimburse for police” who have to respond to crimes at “night clubs.” When asked about businesses having their own security, Silva responded that they can use the BID to hire additional security. He said that Huntington Beach has a “good BID” that hires security and pays for day porters, but not for paving the streets.

An audience member noted that some of the people living on the sidewalk on Gilbert are now staying on Valencia. Domer explained that when the city power washes the sidewalks, the campers are temporarily moved to Valencia. He hadn’t realized that some people were not moving back to Gilbert.

Silva explained, “If there is not a bed (available for a homeless person) we cannot enforce the anti-camping law.” He also said that there has to be a place for people with disabilities. Fullerton is in the North Service Planning Area that is collectively opening shelters in Buena Park, Placentia, and Fullerton. Silva explained that the Fullerton shelter will provide “recuperative services” for people who would otherwise frequently use emergency room services.

Jesus said the shelters should be “up and running” by the end of the year and reiterated that police will “enforce anti-camping ordinances.” He exclaimed, “Hey we have a bed for you” or you can “move on somewhere else.”

Mayor Silva’s wife, Assemblyperson Sharon Quirk-Silva added, “If somebody wanted a bed today, there is Bridges in Anaheim and the Armory opening in 2 weeks.” She acknowledged that transitional living place have rules that participants may not want to follow, such as the exclusion of pets. She added, “Shelters are trying to be better at understanding reasons why people may or may not want to go there.”

Domer said that sometime after the Armory opens on October 15 they hope to add a place for people to store personal belongings that they cannot bring inside as well as a kennel for animals.

Silva explained that City Council had recently agreed to develop a safe parking program and the City Manager has the authority to identify a location. He said they are working with 3 Catholic churches in the area and a non-profit called the Illumination Foundation to provide services free of charge. There will also be social service workers on site for 2 to 3 hours a night.

The city has an $80,000 budget from the low to moderate-income housing fund that will be used to provide lights and fencing, portable toilets, handwashing stations, and 12 hours of security.

Silva said there will be limitations on participants of the safe parking program. The driver has to have a license and insurance. ”It can’t be a free for all,” he added, “People are going to want to camp and stay there,” but it is meant to be a short term solution for people who are “one paycheck away from (getting into) a home.”

Domer said that the people participating in the safe parking program will not have “in an out privileges” and they will be put onto a list for coordinated housing. He also said that people, such as those living in RV’s, who are “service resistant” and “don’t want our help” will not be allowed.

There was confirmation that the state has allotted funds to open a portion of Fairview in Costa Mesa for people with mental health issues. Domer also said that the Orange County Sheriff is trying to change the law so that a person who is arrested won’t lose their medical benefits while in jail so they can receive “rehabilitation” while being incarcerated.

Domer explained that there are 3 recently opened affordable housing complexes, of which some provide permanent support using Mental Health Services Act funding. He said that they “don’t have money now” because Fullerton is “distracted by emergency shelters” and money that should have gone to affordable housing is now going to shelters.

An audience member asked where they could get a list of low-income housing in Fullerton. Domer said it was available on line or from the 3rd floor at City Hall. But then Silva reminded them that the housing is full.

Patricia Hanzo, a member of the Community Development Citizens Committee that recommends how the city should spend Community Development Block Grant funds from Housing and Urban Development, asked why Fullerton didn’t require 2% of housing as Community Priced Units for fire, police, and teachers to be able to live locally. Silva responded that he had asked for that when he was first elected in 2016 but no one else on the council supported the idea.

Domer suggested density bonuses in exchange for providing some affordable units for projects like Red Oak currently being built on Commonwealth.

Silva said he decided to have the Infrastructure and Natural Resources Advisory Committee (INRAC) study the roads along with all other infrastructure assets in the city. INRAC member Arnel Dino said that the committee will be done with their asset review “no later than January” when they will begin discussing revenue options for the roads.

Domer had provided road repair funding options such as a sales tax, a parcel tax, or a gas tax bond to City Council in July 2018. He said, “Our roads are the worst in Orange County” with a $250 million backlog of repairs. He attributed the deficit to the city “choosing to be mostly residential,” being very old, having full water, police, and fire services, and police and fire pensions that are “strangling us.”

Silva said he wants a “comprehensive review” and he is “asking resident for their top needs and wants” to know that “what we hear at the dais is accurate.” He said he would “love to start working on a sales tax.”

Mayor Silva’s next event will be on the first Thursday of November.