There’s Something Strange in the Neighborhood

Who you gonna call? NOPS! The North Orange County Paranormal Society is a resource for people seeking help with understanding their paranormal experiences. I remembered seeing a presentation by the group back in 2015 when I went on one of the Fullerton Museum Center’s Haunted Walking Tours. This October, I reached out to NOPS, scheduled an interview and accompanied them on a paranormal investigation of Le Potager, one of the most haunted locations in Fullerton.

Based in Southern California, the North Orange County Paranormal Society attempts to document the existence of the strange and anomalous phenomena using a scientific method. The paranormal research team’s mission is to professionally, ethically, and scientifically gather evidence of paranormal phenomena for their clients. They’ve focused on educating others on the science of paranormal studies through research and investigations. Together, Jim, Sam and Shawn have covered extraordinary occurrences across the west coast from Arizona to Nevada to Northern California.

NOPS was first established in 2000 by Jim VanEeckhoutte and Sam Neill after their own experiences with the unknown. “All three of us met in high school,” said Sam. “I was friends with Jim’s brother, Shawn, who’s our other member. So I met Jim through Shawn.” Jim added, “We had similar interests in the paranormal and we just hooked up. We said, hey, let’s start going to some of these places, get a recorder and just go and try to get EVP (electronic voice phenomenon). About 98% of the time, we will catch EVPs over anything else.”

I had the pleasure of meeting with all three members of the NOPS active investigative team before their presentation in a small darkened theater within the Fullerton Museum. Stepping inside, I couldn’t help but notice a creepy bald-headed doll with a bruise on its head sitting on stage next to a Raggedy Anne doll. Jim VanEeckhoutte and Sam Neill sat down with me to answer a few questions and talk about their experiences. 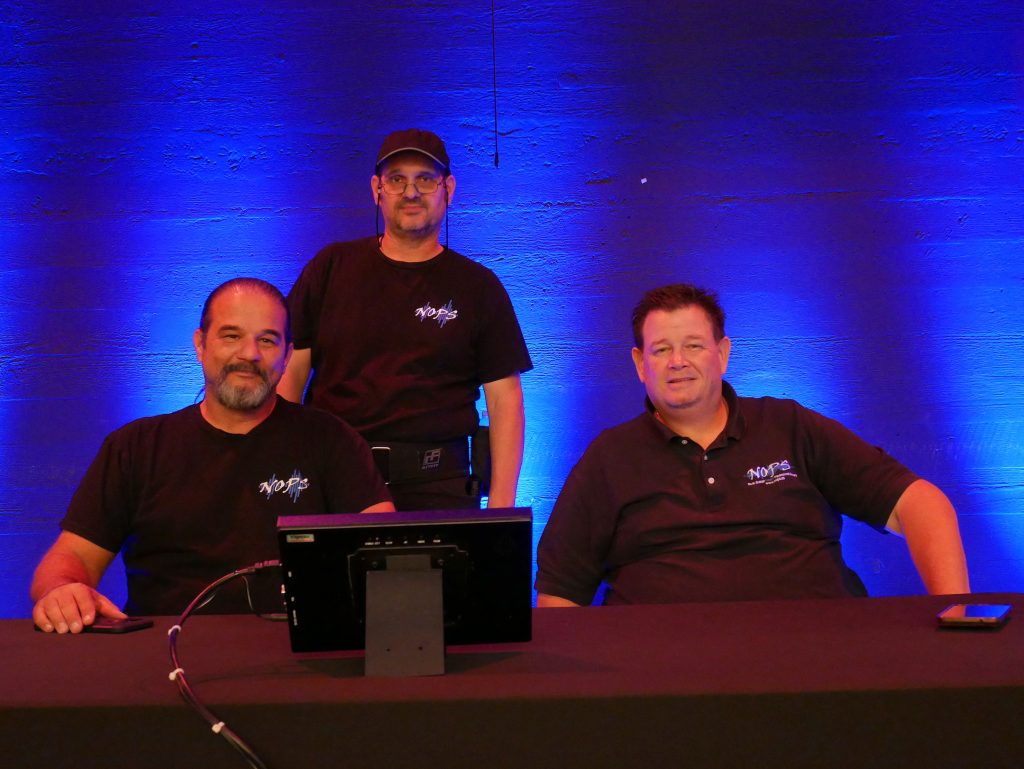 “We primarily investigate spirits or ghosts. We find that a lot of things happen that are interesting with the phenomena,” said Sam Neil, an NOPS co-founder, investigator and case manager who has been involved with paranormal activities as far back as a young child and is curious to know if there is something out there. He’s very eager to find out and communicate with the other side. “We are scientific and slightly skeptic. We don’t go in right away and have a mindset that it is haunted. We will go in and try to prove that it isn’t.”

When people request an investigation, an NOPS case manager will take an “over-the-phone interview” to discuss activities or concerns that they’ve experienced. “A story is just a story unless you can document and validate it via data, audible or visual methods,” said Jim VanEeckhoutte, NOPS co-founder and leader investigator who has investigated the paranormal world off and on since 2005. He’s always looking to find the answers to what happens to those that crossover. To him, just the thrill of the unknown is compelling. Jim has a scientific approach to investigating and will go out of his way to help anyone understand what he knows and what he has experienced.

Depending on the situation, NOPS may send out a preliminary person or Scout team to test the location prior to setting up a first-time investigation. They will not enter your home or business and automatically declare it haunted because they think it’s not fair to the client to be led to believe something is paranormal when it’s not. The NOPS team will go in with an open mind and use the “process of elimination,” which includes ruling out normal activity caused by interference from electrical and electromagnetic devices, 2-way radio, Wi-Fi, and cell phone signals. Then, as a team, NOPS will move on to unexplained activity.

“One of the first things we do when we go into a location is use EMF detectors (devices that detect electromagnetic frequencies). And what we look for are areas of high EMF,” said Jim. “We do a scan of the environment to get a base reading of what it is. We really focus in that area because that will set off a lot of our devices.” Sam considers his own body to be the best piece of equipment that he has. “We’re looking for those personal experiences,” he added. “We’re known in the community as the guys who wear shorts because the more skin that we can have exposed to the environment, the more things that we are going to experience. Even though having all the tools are important, the five senses are probably the most important to me.”

Sometimes, the team will use inanimate objects they hope will attract the attention of ghosts, such as an old creepy doll, a baby doll equipped with microphones built into its ears. When the team believes an apparition may be a child, they will place this doll in a centralized location that is easily observable. They connect the microphones in its ears to a recorder and place cameras around the room to either play with it or whisper into its ears. The doll also has an EMF meter built into its eyes that will detect changes in the electromagnetic field.

The team will later review hours of audio and video recordings in search of anything out of the ordinary. If they’re able to find something they cannot explain, they get excited. Shawn told me that it’s the adrenaline rush that brings the team to decrepit old buildings and creepy establishments time and time again.

The North Orange County Paranormal Society likes to investigate at night because it’s quieter. Most people are generally asleep at night. It’s the perfect time to catch any activity. “We choose the dark because it enhances our other senses like hearing and touch which enables us to collect better evidence,” said Jim. “Investigations can be done at any time, day or night.”

Sam has always lived in Fullerton and one day, he happened to read that the Fullerton Museum hosted a haunted walking tour throughout downtown. NOPS was having one of their monthly meetings, the topic came up and they all agreed to get involved. Together, Jim, Sam and Shawn walked into the Fullerton Museum and talked to Aimee Aul, who is in charge of the tours. “We asked and she was kind of hesitant at first because she had been approached before,” said Sam. “But she got to know us and our personalities and learned that we were actually interested in helping the tours. She gave us a try and here we are seventeen or eighteen years later.” The tours gave them better access to the haunted locations around town, some of which they had already known about.

Both Jim and Sam agreed that Le Potager is one of the most haunted locations in Fullerton. A close second would be the Fox Theatre. “At Le Potager, every time we go, we always get something,” said Jim. “We get this thing that we call electronic spider webs, which is like having a spider web on you. A real spider web you can pull off, but this stuff doesn’t come off. It just feels like static electricity.” The team spends a lot of time before and in between tours at Le Potager, where they’ve always had a personal encounter of the paranormal kind. Sam said, “The same goes for the Fox. More times than not, things are being thrown. People are being physically touched. I’ve had one of my top two experiences in the last twenty-two years at the Fox Theatre. I agree with Le Potager, but I also think the Fox is as equally haunted.”

After the North Orange County Society presented their findings to the public as part of the Haunted Fullerton Walking Tour, I accompanied Jim, Sam and Shawn to Le Potager on their quest to gather evidence of the paranormal. Shawn, NOPS technical investigator, Lead Technician and Producer, brought along sophisticated technology, which included, an electromagnetic field radiation tester, standard and infrared cameras, and electronic voice phenomena recorders.

We passed the Fox Theatre and Angelo’s and Vinci’s before heading across Harbor to the two story house that used to belong to Lillian Yaeger. Interestingly enough, a half hour before I arrived with NOPS, John, owner of Le Potager, went upstairs to what was once Lillian’s bedroom and turned on the light switch. However, a few minutes later, when he returned to the room, the light was off.

Following John upstairs, Jim, Sam and Shawn went to the room at the end of a hallway where Lillian died. In this room, the investigators had previously captured a glass crystal moving by itself for forty-five minutes straight. There was no possible way the air conditioning or wind from the outside could’ve blown it. I stood within that very same room with Shawn, who showed me a purple and white image on the screen of his camera. “That’s what full spectrum looks like. It’s actually the UV, Digital and IR spectrum all in one, so you can see pretty much everything,” he said. “But if you use an IR illuminator, you can see in the dark with it. That’s why this camera was converted to full spectrum so I can see all that.”

All NOPS team members have had some kind of paranormal activity happen to them as a child or sometime later in their life to bring them here as investigators in the search for answers to those experiences. They’ve been around the block many times over the years to the point where they can spot fakes rather quickly. They investigate free of charge for the sole purpose of research, although the group does accept donations for gas money. Sam said, “We do it because we feel there are some things out there that can’t be explained and we are interested in finding out more about the things that go bump in the night.”

To see the paranormal investigators in action, visit the Observer website and click the tab labeled “Local.” Underneath that tab, click on “Emerson Little YouTube Channel,” which will take you directly to my page.