The North Orange County Community College District (NOCCCD) Board of Trustees is expected to vote at their Nov 12 meeting on the proposed stadium at Fullerton College. If they approve the project, construction could start as early as January.

NOCCCD representatives presented the latest stadium plans at a Board of Trustees meeting on Tuesday Oct 22.

There was a formal presentation of the Final EIR led by FC President Dr. Greg Schulz. Reps from Dudek (EIR consultants) and the sound, lighting, and traffic experts also spoke. The public comment period followed, which went for about 45 minutes. The first 7-8 speakers, all staff, alumni, and a couple students from the District/College, spoke in support of the project.

Before the Final EIR was published, NOCCCD President Brown organized a meeting between leaders of the group opposing the stadium as well as Chancellor Marshall, President Schulz, and Rodrigo Garcia, who is overseeing the stadium project on behalf of Fullerton College. Many of the concerns expressed by the opposition group leaders in this meeting were included in the Final EIR as restrictions on usage of the stadium.

These include no ability to use the stadium for concerts, to allow any sound system to be used except for games, and no high school games except in exigent circumstances. Concessions were also made to the City of Fullerton about approving and paying for traffic control.

Those opposed to the stadium had a large turnout and there were many speakers. Some focused on the effects on the neighborhood and City of Fullerton, which were not addressed or alleviated by the use restrictions, such as lighting late at night on weekdays. Several spoke about the “lack of respect” shown by the NOCCCD during the EIR process. Others said that the NOCCCD still has not justified the stadium, pointing out that:

-The football program has a “long history of success,” without a stadium. They obviously don’t need one for recruiting.

-The stadium would be used for only 5 games per year, and would otherwise be 90-98% empty.

Fullerton College’s schedule.  (Information in the formal presentation supported this.)

-The stadium takes more than $6 million away from more deserving and important goals like hiring more teachers, improving STEM labs, scholarships and grants, and providing services to veterans and traditionally disadvantaged (and usually ignored) groups.

-For a fraction of the cost, all of Fullerton College’s football-related desires can be met by sharing Fullerton High School’s stadium, with much smaller projects addressing the other objectives.

Following the public comment was Q&A by the Trustees. There were several questions about lowering the seating capacity of the stadium to 2,000 seats, and other questions on a variety of issues such as lowering the lighting, lowering the sound, traffic impacts, and the reason for calling the stadium a “classroom.” 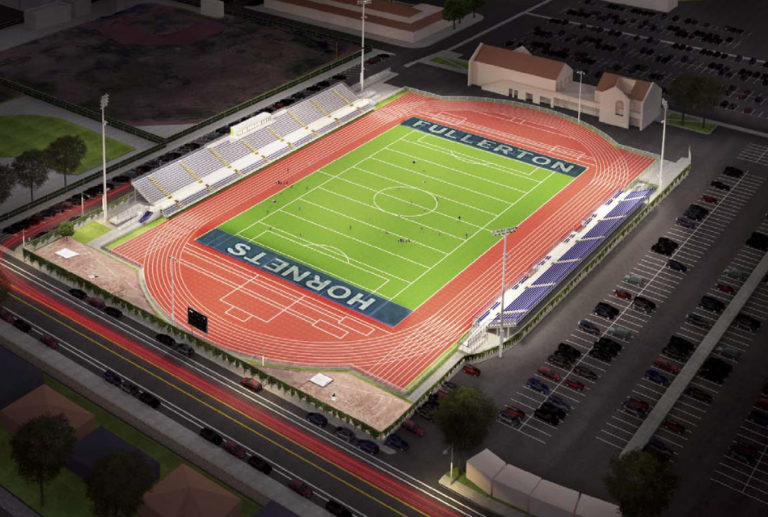